The hottest collab release in drum and bass in the past few weeks is pretty much hands-down the Mud EP from Black Sun Empire and Nymfo. With every track both a dancefloor banger and a technical chin-scratcher, it’s the collab EP that the DnB scene didn’t know it desperately needed.

There’s been a lot of press on this piece already and a lot of fire emojis on social media so one could say that there’s not much else to say about Mud. While it’s true that this EP is better experienced for the amazing melding of styles and sounds that it is, we at Your EDM wondered what the two artists would have to say about it if they were interviewing each other.

Luckily, both BSE and Nymfo were into the idea and soon took off from our boring prompts to make their own questions and talk quite a lot about their technical process, the fun each of them had putting the piece together and what their lives are like in and out of the studio. Just like we imagine their studio sessions would be, the interview turned into a lot of jokes, anecdotes and funny observations. It’s a great read, so we’ll just shut up and let two of the best DnB acts in the industry take over.*

Tell the story of how you met from each of your perspectives.

BSE: Must have been a Red Zone party, a notorious crew that Nymfo was a part of. We have a shared interest in the ridiculousness of Dutch gangster rappers so we always shared videos of what they got into. That’s where the name from our first collab comes from.

Nymfo: Back in 2001 where I played a show in the UK and after my set the promoter organized a meet and greet. And there they were, all the 3 of them, super cute and nervous to finally meet me. They had lots of questions, we made some cool photos too and we laughed a lot! That’s where it all started!

How did you each decide on working together?

Nymfo: I think I suggested it at some point on AIM messenger (wow, old skool). And we all thought it could be interesting because if we make music on our own we each have our own sound. But if we combine those sounds, we create something different again. Especially at that time not that many producers from different subgenres worked together.

BSE: We always enjoy making collabs anyway, and Nymfo is a fun guy to have around. He also has some talent (laughs).

What do each of you like about each other’s sound?

BSE: He spends a lot less time on technical stuff than we do, so he has good ideas and lets them out quickly. His sound is a little more rolling or funky or however you want to call it. I think it’s a good match for what we do.

Nymfo: What I like about BSE is that they are very technical geeky producers and know every plugin,

synth, etc. So that gives a track already a totally different sound and vibe. I work more sample-based, which is a cool part on top of that.

What did each of you like about what the others brought to the table on this EP?

Nymfo: When I think : oh this sound is not working or is not big enough. They open 711 plugins on top of it and next thing I know it’s sounding amazing!

BSE: Nymfo has a way of keeping the vibe in check. Stop messing with the settings of a plugin for 24 hours straight and focus on the tune. Also he can dive into his laptop and come up with some crazy sound or idea to take it somewhere new and exciting. Also he emcees over it sometimes to see what it sounds like in an actual club environment (laughs). 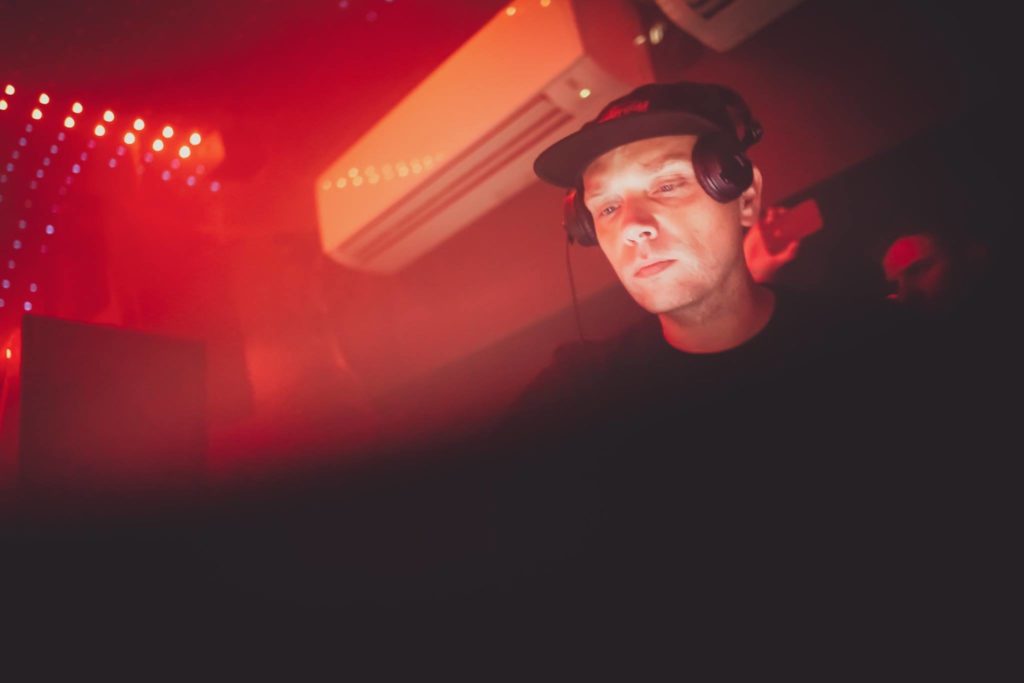 What’s a funny quirk in the studio each of you noticed about the others that, say, Nymfo wouldn’t have noticed on his own or that the members of BSE hadn’t noticed because you’ve been working together so long?

BSE: Mainly that thing about being stuck and spending too much time fiddling with sounds. When something is right or not, you know it, but sometimes it’s hard to move on or just delete and start again. When you have a good collab partner it’s all about that moment when you both think “yes this is it!” And then it’s happy times.

Who did what on each song?

BSE: That’s too hard to dissect

Nymfo: Well, because they work in Cubase, they were always engineering the track because I work in Ableton. But we used a lot of my sounds etc as well of course and especially with this EP they finally listened to my feedback more and more hah! That’s why I think it’s sounding more different than their usual solo stuff.

Was it tricky agreeing upon when each track was finished? Any fun stories there?

Nymfo: It’s funny that they can discuss for hours about something I don’t even hear or notice in a track. They are very critical and precise and also each of them can have a different opinion. At some point I didn’t really care anymore if, say, that kick drum needed to be 0.05 db harder or not.

BSE: Finishing a track is a story of pain and endurance. Thinking about putting your equipment on ebay and call it a day. Format your drives and start a new life. Somehow some tunes still end up in releasable form and you fall in love with it again when you see that people go nuts over it.

Any plans to tour together?

BSE: No not really, but we don’t have restraining orders on each other so promoters can feel free to book us together (laughs).

Nymfo: They booked me for a few Blackout nights which is always a pleasure to play, but no tours yet. But we are open for ideas of course!

What was one thing each of you learned in working with the other artists?

Nymfo: To always turn of the limiter in Trash 2 first when you use it.

BSE: That we have high tolerance for bad jokes.

If you could be any drum and bass producer for a day, who would you be?

BSE: So much good stuff is being created right now so we wouldn’t mind stealing all the tricks of Noisia, InsideInfo, Ivy Lab, Gydra, Serum/Voltage, Calyx/Teebee, Audio, Alix Perez, Camo/Krooked…we could go on. 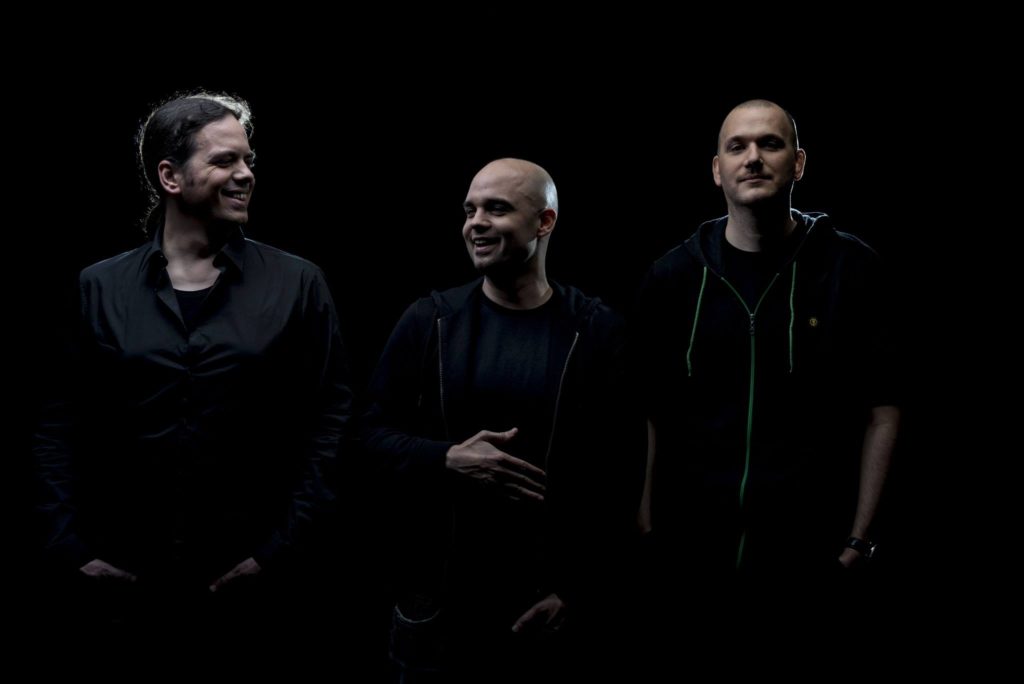 We both have kids; are you hoping they’ll love drum and bass music when they grow up?

Nymfo: DnB fans are a strong and great community, so I wouldn’t mind if they would listen to it and visit some raves.

BSE: What I like most about drum and bass fans is their intensity. They don’t just “kinda” like it and go (to raves) because all their mates go. Maybe some do, but a lot of people are so damn passionate. I don’t care what kind of music my kids will like, I just hope they will love it with a passion and not because it’s something that’s hip right now. They are listening to Gangnam Style a lot now though so I can’t wait for that phase to be over (laughs).

What career do you think you’d have if it weren’t drum and bass?

Nymfo: I would be selling flowers at the Intratuin (garden center in Amsterdam). I always like the vibe there, very zen and everyone is very friendly.

BSE: Anything by Phil Collins. Not even feel guilty about it. Kid of the eighties you know, so all pop from that era.

What do you love/hate most about being dutch?

BSE: It’s a pretty great country to live in! Rene is so tall so he’s not legally allowed to live anywhere else. We don’t make any good TV or movies but bitterballen (Dutch meatballs) are great and so are stroopwafels (cookies made of crunchy waffles and syrup).

Nymfo: I like that it’s not that big and that you can cycle a lot, so it’s less of a problem you are eating lots of frikandellen speciaal (Dutch-style street food sausage with lots of condiments). The thing I hate about it, is the Dutch Oven after you ate a frikandel speciaal.

Mud by Black Sun Empire and Nymfo is out now on Blackout Recordings and can be streamed or purchased via multiple formats by clicking here.