Nostalgia fuels a good deal of fashion – men’s and women’s – but you never know what will actually result. All that volatility might produce a well-loved, revived style – for instance, flannel shirts or bomber jackets – that sticks around in its original form for a few years, before it evolves or gets reworked. Or, less predictably, the finish is grotesque and impractical: The dad shoe, especially, embodies the bigger, exaggerated approach that adds very little except for extra square inches. The duffle coat – one of this season’s most talked-about trends – gets closer to the former, but it’s mostly its own beast. Specifically, you might not have worn this wool and toggle-buttoned style since the grammar school playground. Once you hit 12, it felt too childish, and thus, you moved on. Its practicality, though, isn’t just kids’ stuff. Wool-blend construction frequently means natural wind and water repellency, while the toggles themselves easily fit through the opposite loops. With these points in mind, what about the duffle coat makes it ripe for revival in 2019? 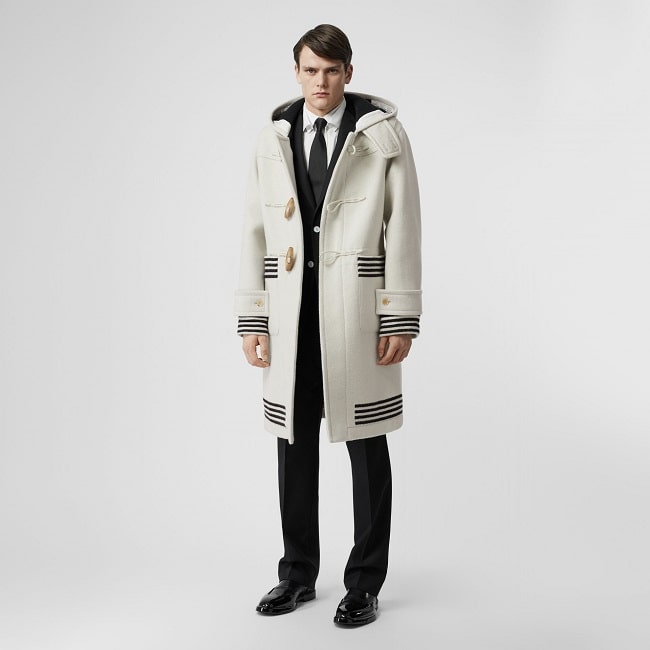 It Has the Typical Menswear Origin Story

While it’s named after the Belgian town of Duffel, long a centre for thick, wool-based textiles, the British navy started using the coat in the 18th century. As with many wool-based military garments – think the pea coat and CPO shirt for reference – the duffle coat utilised this heavier fabric for its natural properties – blocking out wind and moisture and keeping warmth in without overheating the wearer. The garment remained in rotation through World War II, but its silhouettes were made available to the public during the subsequent decades. Specifically, Gloverall introduced them to consumers starting in the 1950s, and through the ‘60s, the low-cost of military surplus turned them into a staple garment for students and creatives living on a budget. Late ‘60s, they evolved into a Mod staple – one so quintessential it returned briefly for the Britpop-fueled ‘90s revival. 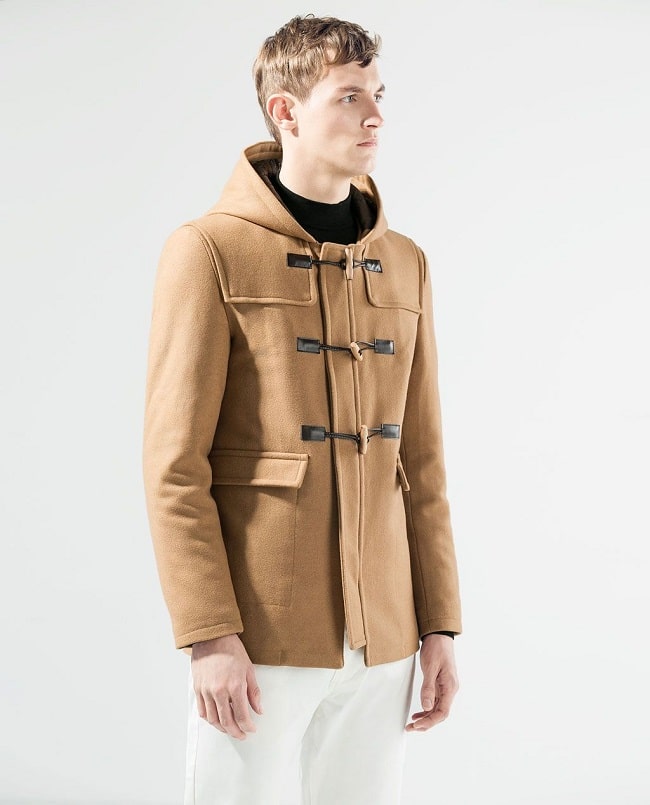 With trends that weave in and out of decades, the duffle coat has a few factors on its side. Firstly, it’s hard to ignore the oversized silhouettes that have replaced the everything-skinny fits dominating men’s fashion since the early ‘00s. Beyond just the wider shapes and longer lines, these garments are meant to drape and be layered: If you can’t fit at least one other item under – think a button-up and a blazer – it’s just too small. While we’ve seen some grandiose approaches over the past few years, the duffle coat looks at it through a reasonable – and yes, nostalgic – lens. Then, back to nostalgia but in greater detail this time. We have to admit – there’s no shortage of childhood-repackaged-for-adulthood concepts. It’s the overpriced cereal-only restaurant in the fancy part of town. It’s the reason ‘Fuller House’ got the green light and lasted five seasons on Netflix. 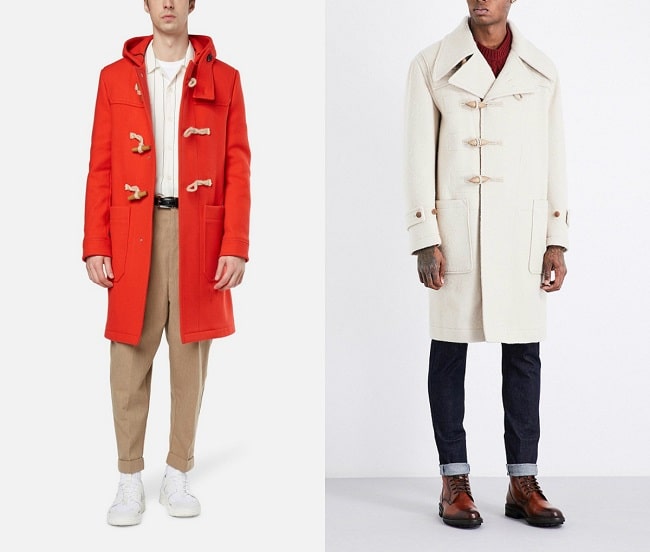 And, it’s part of the reason both Paddington movies were successful on both sides of the Atlantic: Adults loved the books, and they’re family-friendly entertainment that’s warm and fuzzy and not a total slog to sit through. Yet, no adult donning a duffle coat is adding Paddington inspo to his Pinterest board – and for the imperceptible percentage that do, it’s likely for some kind of cosplaying purpose. No, in this case, intertwined with the quintessential childhood books are the – literal and figurative – warm and fuzzies the jacket gives. Now, though, the bright blues and reds you’d spot in the schoolyard have been replaced with shades of charcoal, brown, navy, and green. In a sense, it’s the comfort you remember from decades ago – but now, it’s tastefully made to fit your adult lifestyle. 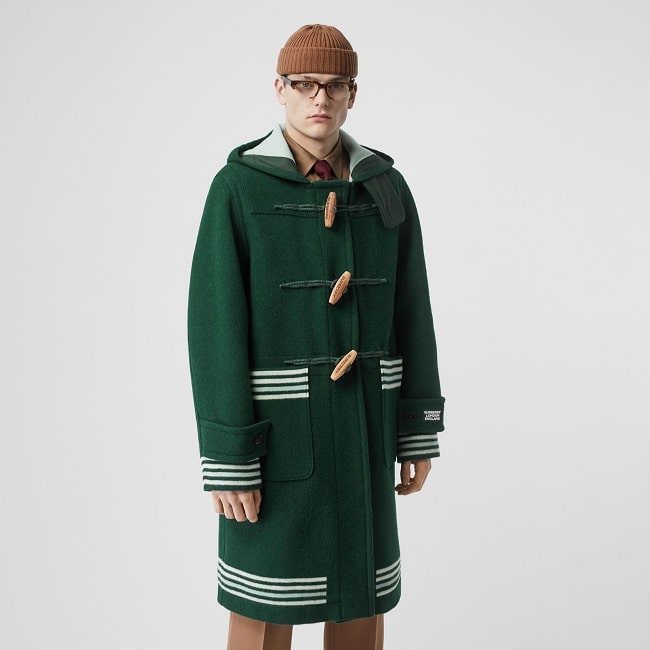 Boiled wool was traditionally used, but in the present, you’ll frequently come across a blend – perhaps with cotton, nylon, or polyamide. In any case, the exterior without additional properties helps shield you against the wind chill and keeps rain on the outside. From here, though, consider:

Character: The toggles and wider fit – plus the nostalgia factor – already nudge this coat into the realm of statement pieces. To a certain degree, too, its distant military background elevates it slightly into heritage territory. When these two aspects flow into each other, the result is less inclined to experiment with colour – save the pinks, purples, and oranges for your longer-length overcoat this season – and fit. On this note, seek out the darker tones and neutrals – black and charcoals, chocolate brown, tan or camel, navy, and greens no deeper than olive – and keep the cut traditional. The design is already spacious enough and would look a tad ridiculous with a Vetements-esque build. On this end, while the duffle coat is clearly an English piece (with Belgian origins), it’s frequently grouped in with French-inspired minimalist menswear. In fact, writer Jean Cocteau supposedly had a few in his closet. For the modern wearer, though, don’t get full-on Parisian-inspired retro. Instead, simple and casual is best: Match it with solid-colour button-fronts or kits, denim, corduroy, or chinos, in an assortment of related or even monochrome hues, or pair it with other heritage materials, like Tweed or tartan. 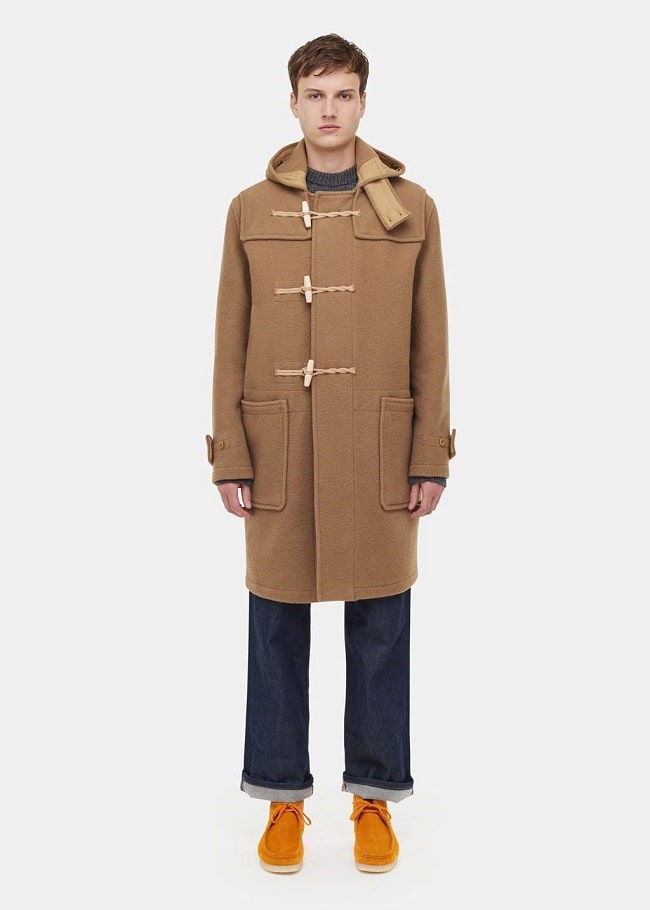 The Toggles: This easy-and-quick-to-use feature traditionally comes in wood, horn, or leather, and fits into the large accompanying loop. Modern versions pulled from the runways tend to exaggerate this aspect, but we’d recommend a more classic approach. The saying “Less is more” applies in this case. The saying doesn’t just encompass toggle size – it’s also how many you opt to secure. Buttoning them all up evokes Paddington Bear – and that’s even before you put on a rain hat. Instead, keep the top one undone – now you’ve got more space for a scarf – and even consider leaving the next loop-and-toggle pair open, too.

How You’ll Layer: Bombers or a blazer under an overcoat? Been there, done that. The duffle coat shakes up this trend slightly and offers a more relaxed alternative. Extra interior space means you can fit at least a layer or two underneath – think a sweater, followed by a blazer. Beyond the obvious, duffle coats tend to offer more room around the shoulders and neck, so, as the temperatures dip past freezing over the next few months, use this to your advantage. Head out in a roll-neck, and drape a scarf around for a secondary degree of warmth.