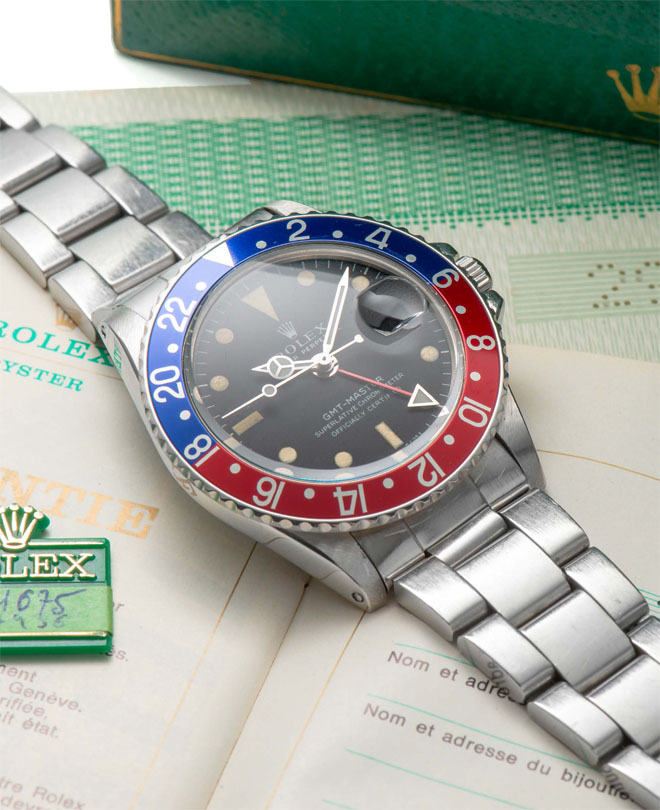 In a little over five days, Antiquorum’s Watch Auction is heading to Monaco for the first time on 16 July 2019. The auction house’s Important Modern and Vintage Timepieces auction is one of the most anticipated auctions of the year for watch enthusiasts. With previews taking place this Sunday 14th July at Hôtel de Paris, the Antiquorum Monaco watch auction includes highlights such as an amazingly aged, highly desirable (at least for vintage Rolex aficionados) – Rolex Ref. 6542 GMT-Master with gilt bakelite bezel (Pepsi no less) amongst other “modern” Pepsi bezel Ref. 1675 GMT-Masters. As many vintage Rolex fans know, a reference with a short-lived production run is likely to become highly sought-after. A Rolex GMT-Master with a gilt bakelite bezel is one of those references. While the GMT-Master has always been produced throughout its continuous production for over six decades, the Ref. 6542 was the very first, marking a milestone within Rolex’s history, making it a holy grail for many collectors. The Ref. 6542 GMT-Master enjoyed a six year production run before Rolex introduced a 1959 update to the GMT-Master collection with the Ref. 1675. Visually, the vintage Rolex Ref. 6542 is distinguished from the newer Ref. 1675 with its lack of crown guards and smaller case size.

Since Rolex enjoys the reputation of a maker of professional watches, one of the key appeals of the Ref. 6542 happens to be incidental – plastic based Bakelite was terrible in tropical climates and the fragility of that component was accidentally antithetical of the Rolex ethos for endurance. Hence, a Pepsi bakelite bezel Rolex GMT-Master with an intact bakelite bezel are highly coveted. A Patek Philippe Nautilus Jumbo in steel with sigma dial

Sigma dials are another highly desirable element for vintage watch collectors. Suffice it to say, given the financial motivations and incentives out there, there are many myths about what defines or constitutes a sigma dial but Louis Westphalen for Hodinkee has a great essay on it. Essentially, these special “sigma dials” are the purview for a handful of members of the Swiss watchmaking industry. The members of l’Association pour la Promotion Industrielle de l’Or (APRIOR) is an industry trade association for those making gold watches – with gold prices skyrocketing during the mid 1970s and the confluence of the worsening quartz crisis, sigma dials became one of the ways for watchmakers to signify that a watch had hands and indexes made of solid gold and so represented a good investment. Rolex, Patek Philippe, IWC, and Vacheron Constantin were among the members of this exclusive group and while sigma dials never quite left an enduring mark in the industry, it’s sought after not so much by what it used to represent but the rarity in that brief moment when the industry was trying their hardest to demonstrate the difference between value and worth. “Padellone”, Italian for “big frying pan”, the 38mm Rolex Moonphase Ref. 8171 was considered large back in the day.

To modern watch enthusiasts, Rolex is a name for robust sports watches but once upon a time, the Geneva manufacture did make dressier moonphase watches. Among them, was the lesser known Rolex Ref. 8171 released in 1949. Earning the nickname “Padellone”, Italian for “big frying pan”, the 38mm Rolex Moonphase Ref. 8171 was considered large back in the day. Featuring a snap-on case back, and reference 6062 with a screw-down Oyster case, many of these rare Rolex moonphase watches have been polished and refinished that most of the original engravings are barely noticeable or gone. Only 1000 models were ever produced and the Rolex Ref. 8171 Padellone moonphase presented by Antiquorum in Monaco was worn but never polished, adding to its appeal and value. 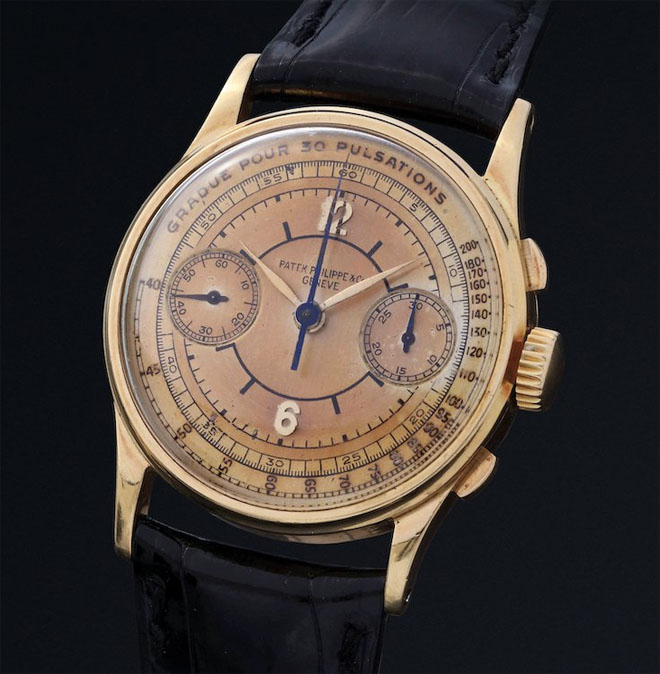 The Patek Philippe Ref. 130 is home to one of the first chronographs produced by Patek Philippe worthy enough for its own specific reference number, the manual-winding calibre 13-130. In fact, the chronograph calibre was so highly sought after that when Patek Philippe found new old stock of these highly modified Valjoux 23 movements in their old Rue du Rhone, Geneva boutique where watchmakers once made watches on the highest floors, they were overhauled and made into new watches – Patek Philippe Ref. 3670A steel chronograph. 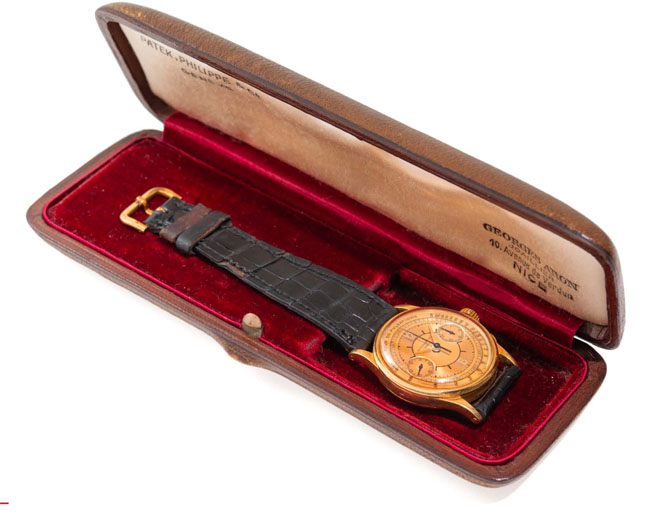 Today, the round Art Deco Chronograph from 1938 in 18k Yellow Gold has twin nine and three subdials and two-tone silver pulsometric sector dial. Another edition of the Patek Philippe Ref. 130 in monopusher chronograph configuration with subdials in twelve and six was previously sold by Aural Bacs and Philips in Geneva for US$5 million in 2015. This Patek Ref. 130 chronograph with its case-back engraved in taille-douce (fine cut) with the cypher “L J”, of Lucien Jacoberger (1903-1981) will for sure attract a lot of attention among enthusiasts if only because it’s one of the rare watches with an epic provenance. It’s owned by descendants of Dr. Jacoberger who had a long career as a surgeon, both as a civilian and in the military due to his involvement with the French Forces of the Interior, a French resistance organization during World War II. Lucien was gifted the watch after he saved a Count’s daughter during the war. How’s that for provenance.