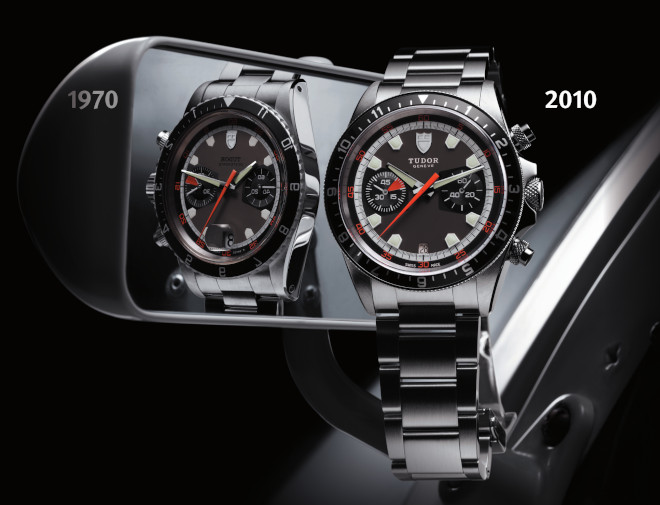 It’s a common adage that “Everything that’s old is new again”. Indeed, a product of the “Seventies”, Tudor missed that era of “serious” chronographs from the mid 1950s to late 1960s which saw the introduction of crucial chronograph watches like the Reference 6234, predecessor to the Cosmograph Daytona, the Speedmaster, the Navitimer, the Carrera and the Monaco and instead hit its stride with an undeniably 70s aesthetic of bold, almost psychedelic colourways, novel design elements (which gave birth to unique monikers like “homeplate”) and graphic lines. If there ever was to be a more memorable chronograph emblematic of the Roaring Seventies, it would be hard to look beyond Tudor. 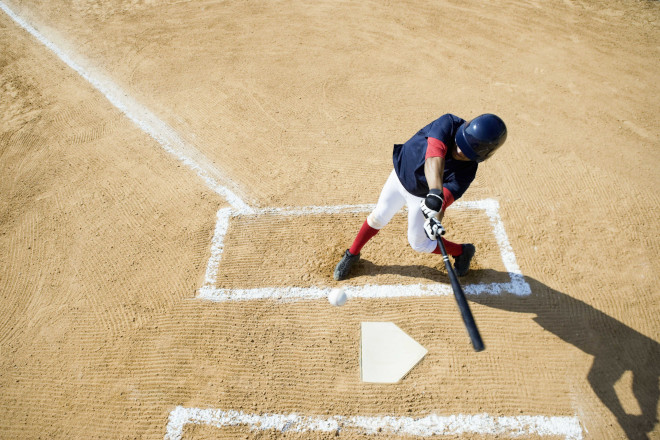 Indeed, launching its the first Tudor Oysterdate in 1970 with distinctive “home plate” hour markers reminiscent of American baseball homeplates, Tudor chronographs have enjoyed a 50 year evolution at the fore of some of human history’s most enduring fashion trends. Trends which incidentally, are all the rage today in the 21st century – a testament to its now classic design and the Tudor Oysterdate chronograph as a classical icon embodied in the contemporary Heritage Chronograph. 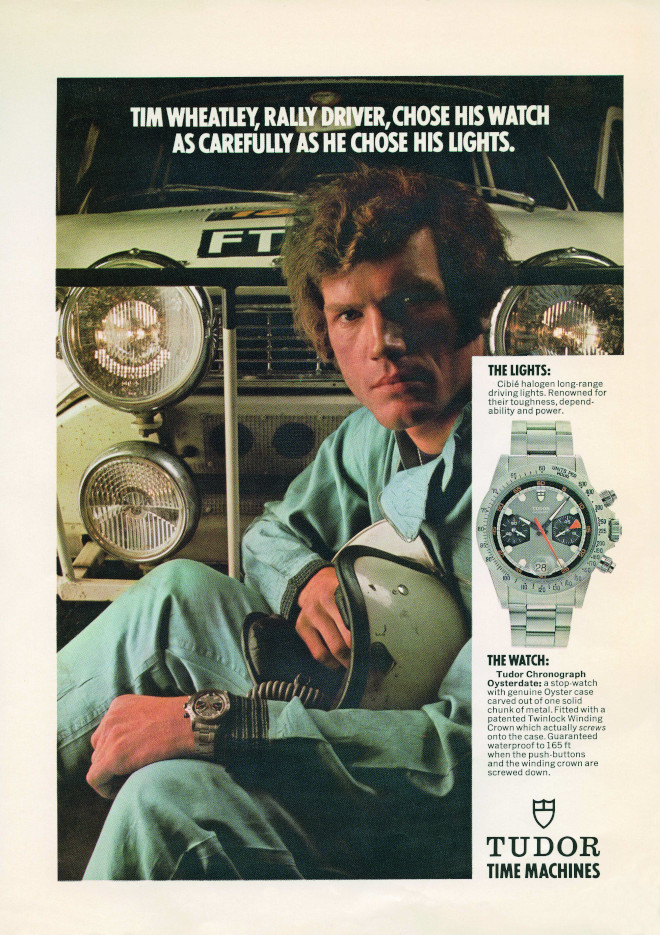 The 39mm Oysterdate Chronograph was 3mm bigger than its Cosmograph Daytona cousin, and  featuring crown guards, waterproof screw-down pushers before its more famous cousin did, the 1970 Tudor Oysterdate came in two flavours: Ref. 7031 with black plastic tachymeter bezel and Ref. 7032 with steel tachymeter bezel; these manual-winding Valjoux 7734 powered chronographs with 45min register would set the tone for just how large modern chronographs would become. The contemporary Tudor Heritage Chronograph however, is not based on either of these two references but rather a never-produced prototype reference 7033 with a bidirectional rotating bezel with 12-unit graduated black disc in anodised aluminium. 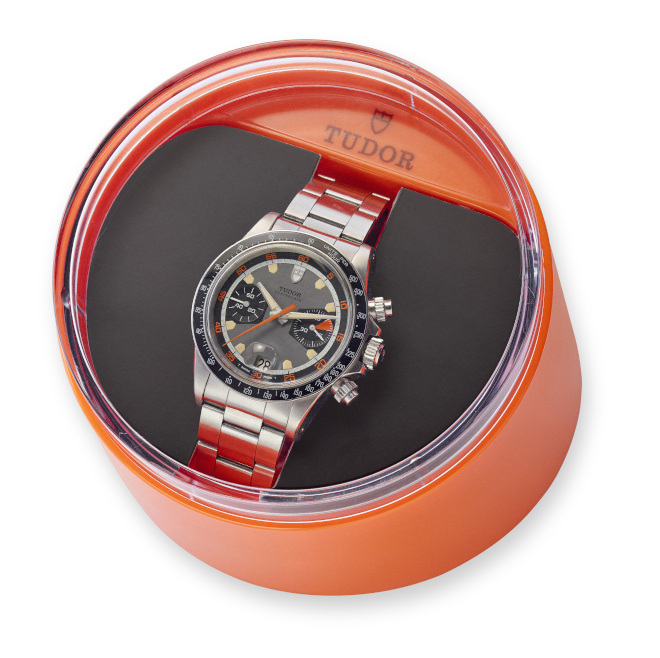 At the forefront of sustainability, Tudor advised owners of their chronographs to use their watch containers as ashtrays or receptacles for peanuts

The follow-up model: 1971 Tudor ‘Monte Carlo’ Oysterdate, is so named for peripheral dial markings evocative of roulette tables in Monte Carlo. Released in Ref. 7149 with plastic tachymeter bezel, Ref. 7159 with steel tachymeter bezel and Ref. 7169 with the 12-hour rotating bezel (that was meant to be introduced the year before in the ref. 7033.)- the new Monte Carlo Oysterdate chronographs took a slight departure from the more sombre black and grey dials and introduced new colour palettes like grey/black/orange and also blue/grey/orange schemes with matching blue bezels. While it retained the trapezoid dual registers and orange central seconds hands, the Monte Carlo eschewed the “home plates” for new thick rectangular hour markers. Beneath its dial, lay the upgraded heart of a manual-wind Valjoux 234 offering a more sophisticated chronograph mechanism, with clutch and column wheel. 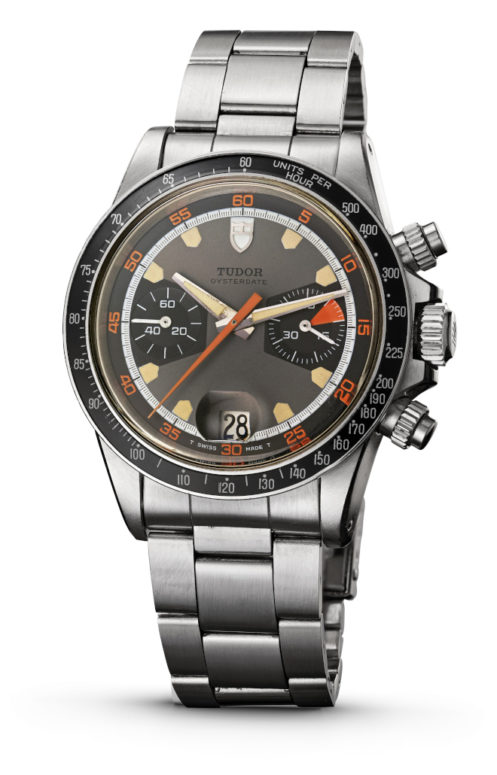 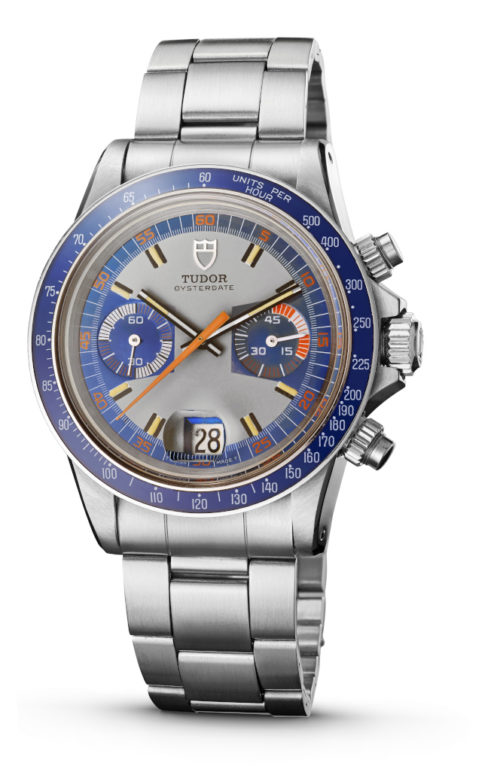 Launched in 1976, the new Prince Oysterdate watches were the first Tudor chronographs to be equipped with self-winding movements. While the new automatic chronographs retained the general lines of the previous families, they moved away from two-registers and incorporated three subdials in 12-9-6 o’clock layouts. Furthermore, the brand’s first automatic chronograph  had to be made thicker to accommodate the rotor of the self-winding calibre, eventually earning the nickname “Big Block” in collectors’ circles; the Prince Oysterdate also introduced 3 new chronographs – the  Ref. 9420 with Bakelite tachymeter bezel – of which blue bezels were incredibly rare for some reason, Ref. 9421 with bi-directional 12-hour bezel, Ref. 9430 with steel tachymeter bezel.

Using a Valjoux 7750 automatic chronograph movement with quick-set date, the “Big Block” also adopted applied hour indexes with sloped tips and added subdial details like raised centres add depth to the dial and detailed the date aperture to match the overall aesthetic. The name “Big Block” endured until the new 79100 series was introduced in 1989. 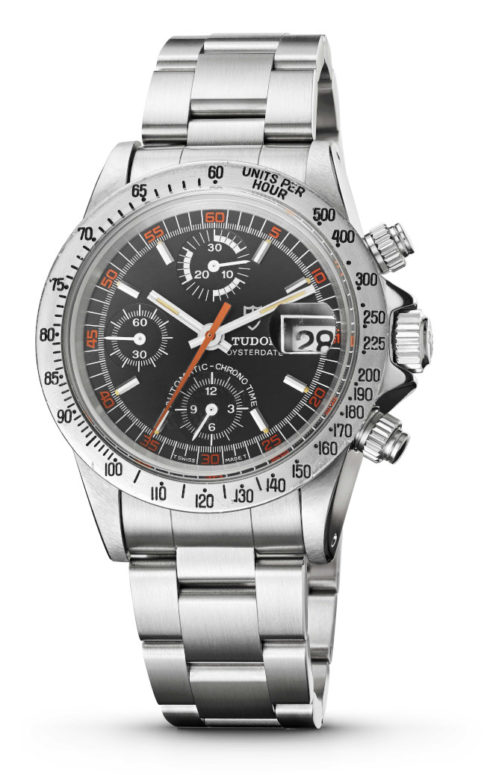 Like the previous generations, the 9400 series consisted of at least two references and underwent only minimal modifications from its predecessor Big Block Oysterdate and followed with the convention of each model distinguished  by their bezel type: Ref. 79160 with black plastic tachymeter bezel, Ref. 79170 with black graduated 12-hour bi-directional bezel
and Ref. 79180 with steel tachymeter bezel.

Similarly, several dial variations were available. These featured two aesthetic trends, one freely inspired by the spirit of the dials of the two previous series, the other highlighting the strong contrast between dial and counter with black and white or silver and white combinations; but the series 79100 opted for concentric circles instead of the slightly domed centres for the predecessor Oysterdate’s subdials. The painted window around the date window disappeared as well but the words “Oysterdate” and “Automatic – Chrono Time” started to make an appearance on the dial. 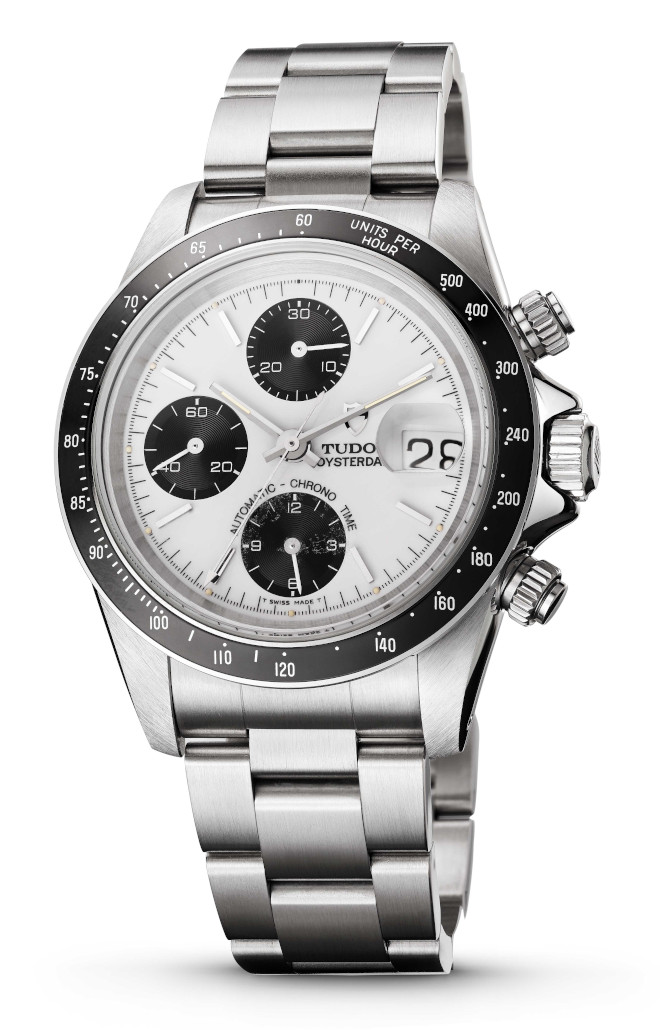 In 1995, the 79200 series of Tudor chronographs saw the aesthetics of the Prince Oysterdate chronograph were subtly updated. Firstly, the signature imposing case (which was eventually seen on the Daytona) descended from the previous three generations of chronographs  became more refined and rounded. Even though the 1995 ‘Sapphire’ update on the Tudor chronograph still retains its highly recognisable silhouette, it is now presented with softer lines composed of curves and rounded configurations that were originally introduced on the Daytona. Speaking of which, the use of Rolex ‘signed’ (that is to say: featuring Crown motifs) winding crowns and casebacks were phased out for Tudor versions over the span of a few years.

Several notable developments marked the design of this fourth generation over the next few years, including the introduction of a sapphire crystal – hence its nickname  – as well as gold and steel configurations, and a leather strap. The new 1995 Tudor Oysterprince chronographs also launched the Ref. 79260 with black aluminum fixed tachymeter bezel, Ref. 79270 with black aluminum rotating 12-hour bezel, and Ref. 79280 with polished steel fixed tachymeter bezel with aluminium inserts instead of plastic bezels from 1970.

In terms of dial aesthetics, “Oyster” on the dial replaced with “PRINCE”, a myriad of hues were introduced together with matching red, yellow, green, leather straps. The steel 3-link Oyster bracelets also gave way to 5-link bracelets while we saw the eventual introduction of painted Arabic hour markers instead of the usual applied baton indexes.

To mark the 40th anniversary of the first Tudor chronograph, the brand launched the Heritage Chronograph. Though it was a modern design, it adopted the main aesthetic elements of the famous reference 7033 (a prototype from 1970 with hourly graduated rotating bezel) that was never serially produced, and then updated the design with numerous subtle, unique details such as the bevelled, polished angles of the horns, the polished protective shoulder of the winding crown, and the knurling on the rotating bezel and pushers. 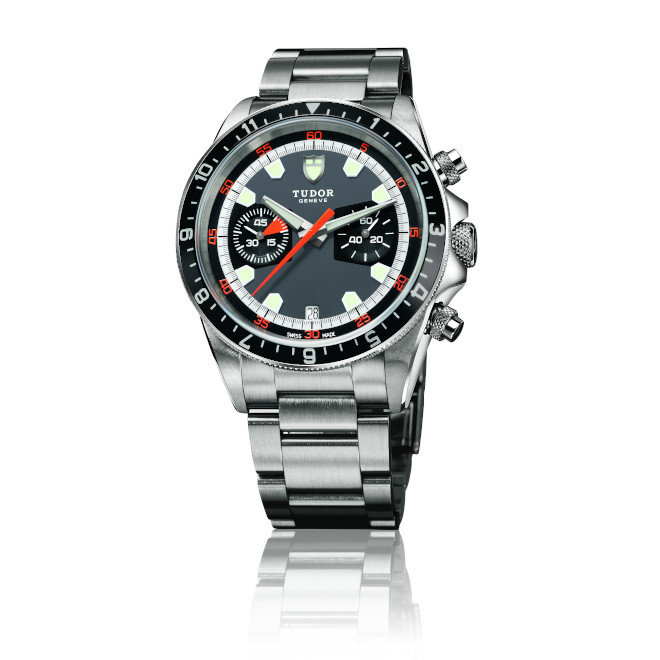 Even the black and slate grey dials introduced in the 2010 Tudor Heritage Chronograph were inspired original variants first seen in 1970. The original painted luminous pentagonal or “home plate” hour indexes return as applied home plates – adding a refinement and sophistication to what otherwise might be a classic re-issue chronograph edition.

We say this because while the Tudor Heritage Chronograph is not a re-edition, the layout of the dial is identical right down to the proportions of each design element – a challenge in its own right considering that the automatic chronograph is now 42mm instead of 39mm and utilising an ETA 2892 with Dubois Depraz module designed specially to replicate the 45 minute counter where most other chronographs count up to 30 minutes only. That said, the subdial positions are inverted, with the small seconds at 3 and minute counter at 9. The date complication drops the iconic magnifier but retain its 6 o’clock position.

As an additional detail, Tudor offered a black, grey or orange Jacquard fabric strap with this model, tapping on the NATO sports strap zeitgeist that was in its infancy in addition to the steel bracelet that came with the Heritage Chrono. 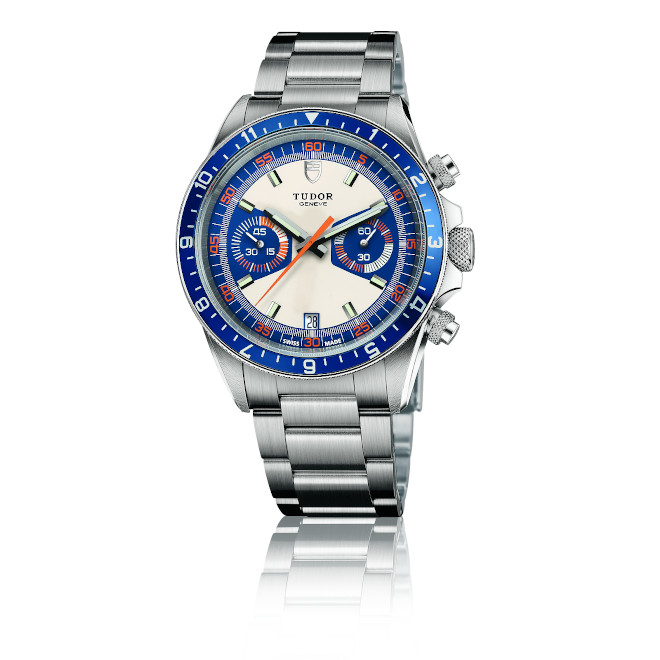 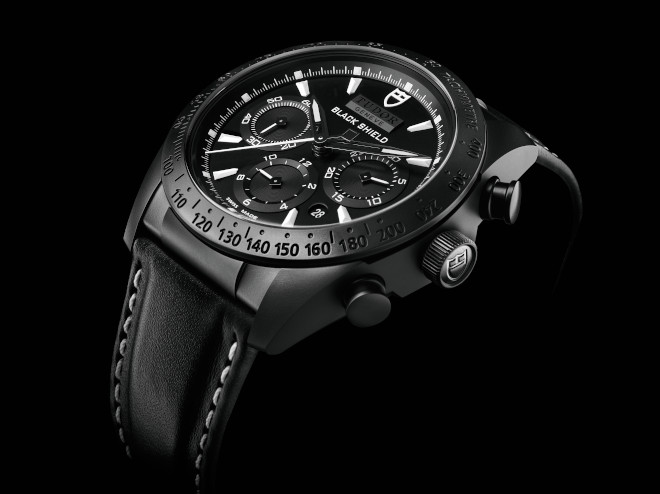 The launch of the Tudor Fastrider Black Shield caught industry commentators by surprise. Revolutionary and hypothesised as the Wilsdorf group’s answer to the black PVD trend that was beginning to peak in the watch industry, the ceramic Fastrider Black Shield was a resolutely sporty matt black chronograph that broke away from the brand’s traditional aesthetics.

Its monobloc high-tech ceramic case reflected its technological prowess and performance. Angular and detailed, it resembled the fairing of a Superbike. But more importantly, it was Tudor’s first attempt at a classic 3-6-9 chronograph layout where earlier editions of its 7750 powered Oysterprince Chronographs used a 12-9-6 subdial layout. In black ceramic, some referred it as the “Daytona’s younger cousin”. Intead of the ETA 7750, it adopted the 7753 for its powerplant featuring a cam chronograph system and the date at 4.30 adjusted by a quickset date corrector at 9 o’clock.

Its production process involved high-temperature injection and was the result of high-level technical expertise, boasting a unique performance for a watch in this price bracket. Initially offered in a black configuration with red hour markers or black with bronze-coloured hour markers, the Fastrider Black Shield was also made available in a high-contrast format, black with white hour markers. Later editions of the Tudor Fastrider included colourful dials reminiscent of earlier Oysterprince chronographs from the 70s. 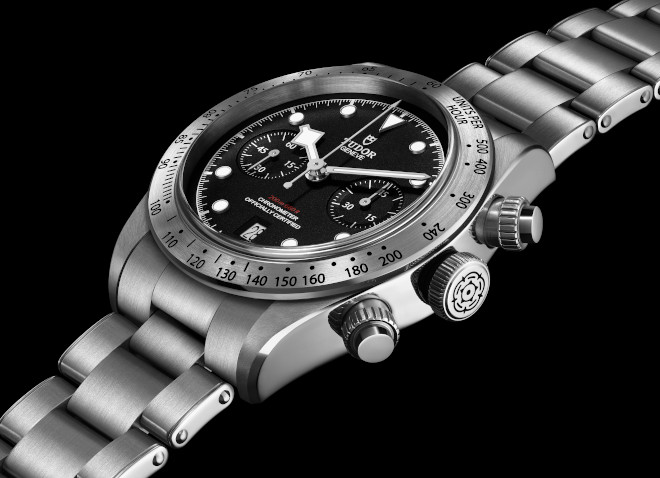 Three years ago, a collaboration between two behemoth watchmakers (the last time such a cooperation took place was during the 1969 race for the automatic chronograph which saw Breitling, Heuer and Hamilton-Buren team up and give us the Chronomatic) saw Breitling work with Tudor to give us the Calibre B01. Modified with an in-house regulator with a silicon hairspring – a joint patent of Rolex, Patek Philippe and the Swatch Group – Tudor christened the COSC certified chronometer the MT5813 calibre.

That said, Tudor’s latest chronograph may bear the name “Black Bay” and reside in that collection but it is very much in the family of Tudor high performance chronographs, bearing witness: the subdial at 3 o’clock has a 45-minute range instead of the usual 30 minutes, like its first chronograph. 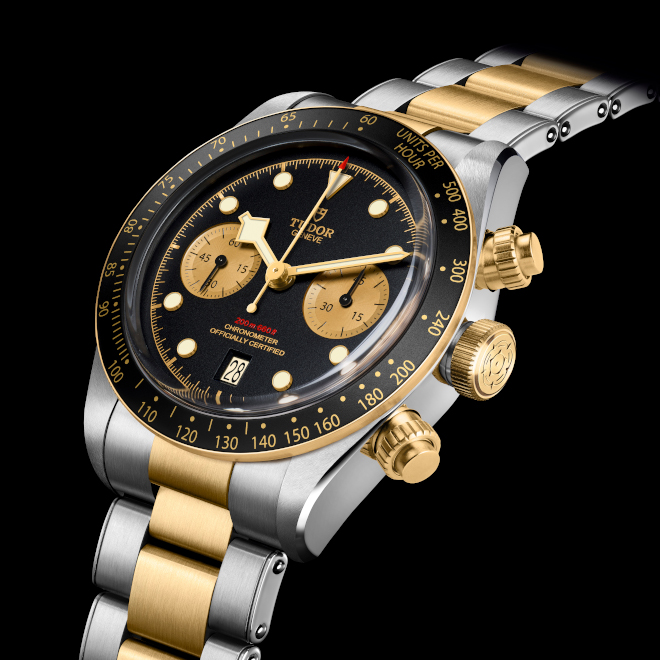 In 2017, this bold new development was given a face and form in the Black Bay Chronograph, Tudor’s first Manufacture chronograph. Combining the aquatic heritage of Tudor’s beloved Black Bay family with the chronograph’s timekeeping function that ruled the racetrack, guaranteed to a depth of 200 meters, two screw-down pushers (as on the first Tudor chronographs) secure the precious timing instrument from a watery death. The result was the Black Bay Chronograph with superior performance and a unique dive-inspired sportive-racing design. The year it launched, it won the prize for best watch under 8,000 Swiss francs at the Grand Prix d’Horlogerie de Genève.

Boasting a 70-hour power reserve, the Manufacture calibre chronograph MT5813 behind the Heritage Black Bay Chronograph was a high-performance movement, designed in the purest watchmaking tradition, with column wheel mechanism and vertical clutch while keeping with Tudor virtues for extraordinary robustness and reliability.