Tom Ford Beauty Badass (01) Eye Color Quad ($88.00 for 0.35 oz.) is a new eyeshadow quad that features four shimmery shades: soft taupe, eggplant, dark gray, and deep black. The formula in the palette felt different than past iterations from the brand, even the more baked variety (which has a similar, raised edge in the pans).

Instead, the eyeshadows in the quad have more slip, felt more cream-like, than past releases, which gave them a denser, thicker feel and better grip with higher intensity from the get-go. It’s not a texture that I feel like is dominant in the marketplace yet, but it did heavily remind me of some of the denser, creamier (yet still more powder than cream) formulas seen in the Pat McGrath Blitz Astral quads, which makes me wonder if it is something slightly newer that will eventually trickle down to more brands in 2020.

Badass #1 is a light taupe with neutral-to-warm undertones and a bright, metallic finish. It had good pigmentation applied dry that built up to full coverage, but application with a dampened brush yielded richer coverage immediately and gave it a deeper hue overall.

The texture was smooth to the touch, dense, and more cream-like than other “baked” formulas from the brand. It needed to be applied with a heavier hand or a flat/firm brush to pick up product initially, though the color applied well and blended out easily on my skin. This shade stayed on well for nine hours before fading a bit. 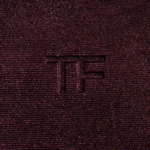 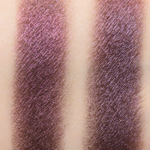 Badass #2 is a deep purple with a more satiny sheen and subtle, warm undertones. The consistency was smooth, dense, and a bit thicker in the pan, and while it had the shape of the more baked-like formulas from the brand, it actually felt more cream-like and emollient, though it was still more powder-like than truly a cream. It had opaque pigmentation regardless of whether it was applied wet or dry. The color applied well to bare skin and blended out without difficulty. It lasted nicely for nine hours before fading noticeably.

Badass #3 is a deep gray with cool undertones and a sparkling finnish. The color applied deeper than it appeared in the pan–almost as if all the shimmer floated over the underlying pigment–and had a denser, richer texture that was like a cream-powder hybrid (though more powder than cream).

It worked better with slightly firmer, denser brushes and a moderate-to-heavy hand–there was no powderiness kicked up. This shade yielded nearly opaque coverage applied with a dry brush and opaque coverage with more noticeable sparkle with a dampened brush. It wore well for nine hours with slight fallout over time.

Badass #4 is a deep black with subtle, cool undertones and fine, multi-colored micro-sparkle throughout. The creamier, more emollient texture–like a cream-powder hybrid that felt and acted more like a powder on my skin–gave it better adhesion and hold of those sparkles, so they translated during application.

It had a denser feel, and while it blended out without too much effort, it needed to be paired with something softer to really give it an even edge. It had opaque pigmentation applied wet or dry, though the dampened application yielded richer payoff with less product and more depth. It stayed on well for nine hours before fading noticeably.

10 Fall Eyeshadow Palettes That Are Worth the Hype

Quote of the Day
George Patton
If a man does his best, what else is there?
Ashburn