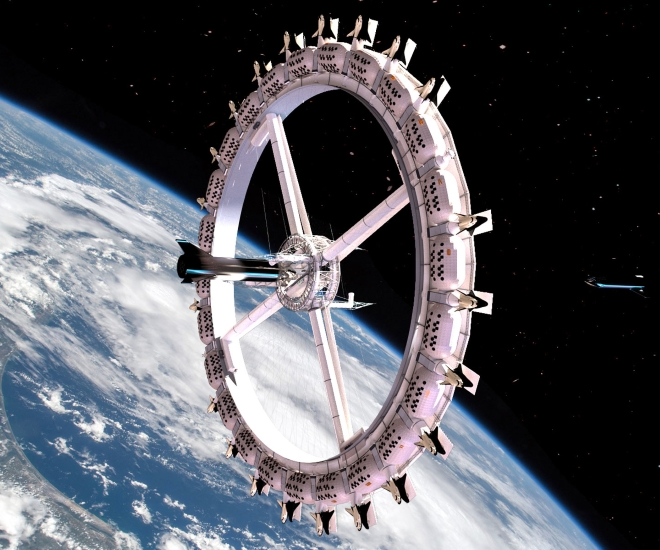 Despite the global pandemic affecting all industries, he remains optimistic and said though there had been some delays, construction is planned to start in 2026 and take about a year for Voyager Station to become operational.

“We’re trying to make the public realize that this golden age of space travel is just around the corner. It’s coming. It’s coming fast,” said Blincow.

Depictions of off-world dwellings in the media have greatly influenced how most of us think of living spaces beyond our atmosphere. Think Star Wars, The Martian, Interstellar or 2001: A Space Odyssey. The aesthetics of the space stations films is largely similar.

Bright artificial lighting, and sterile rooms and corridors finished in a cold, glaring, white. Tim Alatorre, Orbital Assembly Corporation’s senior design architect said that the Stanley Kubrick movie served as “almost a blueprint of what not to do.”

Rather than choosing to highlight the futuristic, high-tech designs of Voyager Station, renderings show interior design choices not unlike those of luxury hotels which already exist on Earth. Facilities on board the hotel include a cinema, health spa, gyms, restaurants and even concert venues. 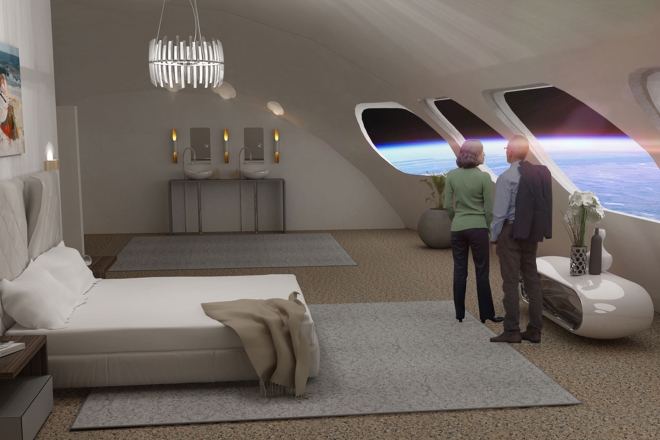 An artist’s rendering of a room aboard Voyager Station shows furnishings like those found in conventional hotels on Earth. 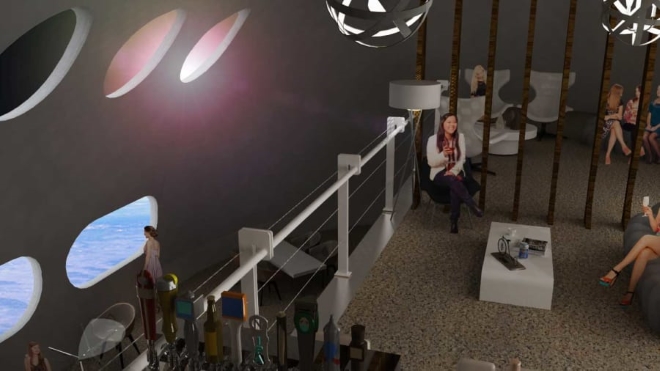 Artist’s rendering of a bar offering a space for socialisation aboard the space hotel. 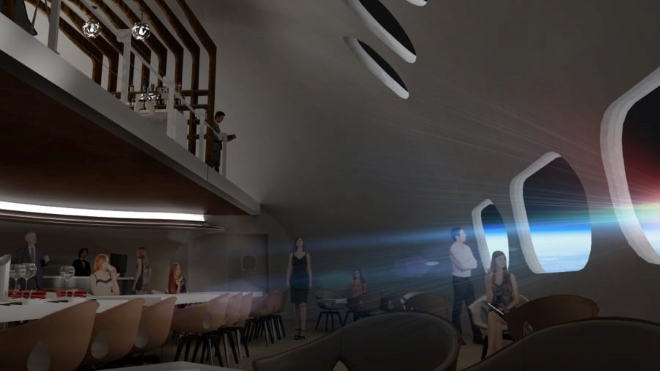 However, the hotel’s designers did consider that sci-fi aesthetics and features might be a great part of the appeal. Thus, they also included features which highlight the novelty of being in space.

The hotel’s restaurant is planning to offer “space food” such as freeze-dried ice cream, not unlike the fare that astronauts enjoy during their missions. Alatorre even said they would be leveraging on the station’s ability to regulate gravity to create areas for recreational activities which “highlight the fact that you’re able to do things that you can’t do on Earth.” 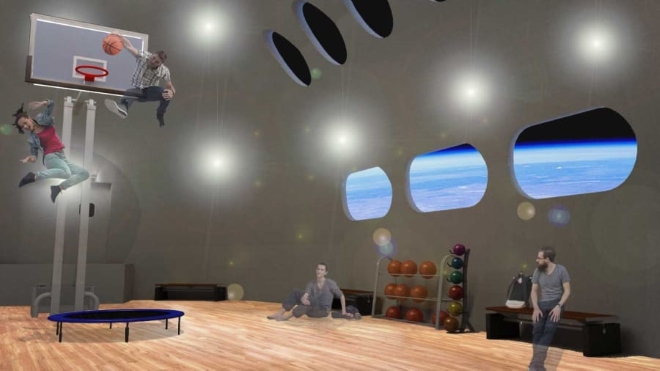 Areas will be designed with lower gravity to highlight that patrons are in fact, in space.

Apart from these, Voyager Station will offer viewing lounges, bars, and rooms with spectacular views of the Earth from its vantage point in low orbit.

As mentioned before, Voyager Station would be able to simulate and regulate the gravity onboard. This will be done using a rotating wheel, with modules, housing facilities mounted on its circumference, one of the hotel’s most striking visual signatures. The force keeping guests and crew on the ground is not technically gravity as we understand it, but rather, an impression of gravity simulated using the centrifugal force generated by the rotation of the wheel.

As Alatorre explains it, “the station rotates, pushing the contents of the station out to the perimeter of the station, much in the way that you can spin a bucket of water — the water pushes out into the bucket and stays in place.”

Because of this, there is no gravity at the hotel’s centre, and gravity would get greater the further out you ventured towards the circumference of the wheel. This drew inspiration from Wernher von Braun’s 60 year-old design.

Von Braun was a distinguished aerospace engineer that developed rocket technologies in Germany, and later, the US. Because of his influence on the hotel’s design, voyager was originally called Von Braun Station. However, The Gateway Foundation soon dropped the name due to the controversy surrounding his part in the Nazi rocket program.

Artist’s rendering of the modules on Voyager’s rotating wheel. As our technology advances, so too does our ability and desire to expand our horizons. Space exploration has been of significant interest for a multitude of reasons. And now it seems we are close to being able to venture into this final frontier. NASA’s Perseverance rover recently drove on Mars’ surface and sent back images of ground conditions on the red Planet. But it isn’t just government organisations who are interested in the far reaches of space. Several private companies see the potential in space tourism and are working hard to make that a reality.

There are even talks about a future partnership between Elon Musk’s SpaceX and the Gateway Foundation. However, a trip into space is going to cost quite a hefty sum. Room rates for the hotel have not been released as of yet. But, we can make an educated guess by looking at the prices of endeavours from other companies. For instance, Virgin Galactic has plans to bring tourists on flights into sub-orbital space, costing around US$250,000 per trip. Despite the high initial costs, the Gateway Foundation is hopeful that in future, space holidays would cost the same as “a trip on a cruise or a trip to Disneyland.” For more information on the Voyager Station and other planned space projects, head over to the Gateway Foundation’s website.

Cryptocurrency Is A Currency Of The Future

Three of the Most Impressive Casino Resorts in the World