Playful and highly original, the name World Tour refers to the Gaston-Louis Vuitton collection and its option for personalised luggage labels

Louis Vuitton has been crowned the world’s most valuable luxury brand for six consecutive years, for good reason. Founded in 1854 by a Monsieur Louis Vuitton, the former Malletier and pioneer of the art of travel has successfully parlayed its universe of fine travel accessories into fashion and at the turn of the 21st century, into a world of watchmaking. In their attempt, they birthed the Tambour, Louis Vuitton’s first watch collection.

French for “drum”, the Tambour dates back to 2002, taking its namesake from its signature drum shaped watch case which helped not only define a new design language in the haute horlogerie but also promote a uniquely Vuitton perspective of watchmaking. 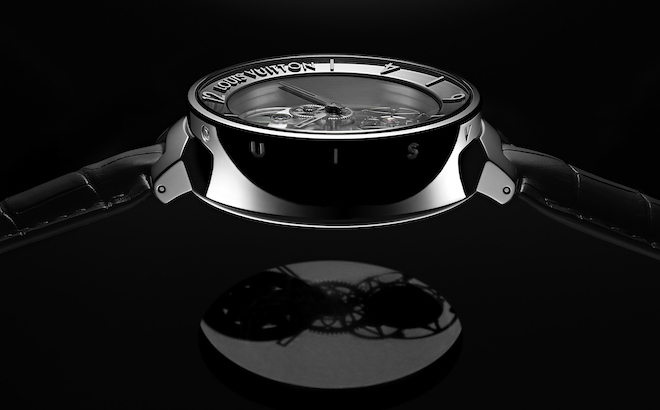 “(Tambour) took the watch world by surprise. It was not expecting to see a ‘handbag and luggage maker’ producing such high level watch products.” – Philippe Pascal, President of LVMH watch and jewellery division (2004)

Effectively marching to the beat of its own ‘drum’, the Tambour’s highly distinctive shape was introduced to an industry used to the usual suspects of round, square, octagonal or some variation in between and like new shapes introduced in the late 20th century, became immediately polarising: many loved it, some were unused to it. With all matter of objets d’art on display in boutiques designed more like well-appointed mansions and heritage museums, it is easy to dismiss Louis Vuitton’s watchmaking know-how as flash-in-pan and lacking substance; however the appointment of Michel Navas and Enrico Barbasini as suppliers for high complications in 2012 and the subsequent acquisition of their enterprise, La Fabrique du Temps in 2014, forces even the most cynical critic to re-evaluate how one perceives Louis Vuitton as a legitimate watchmaker.

Like other heritage watchmakers, Louis Vuitton combines all its watchmaking operations in a new La Fabrique du Temps Louis Vuitton manufacture in the heart of Switzerland’s watchmaking heart – Geneva. All movement development and production, as well as dial making, and gem-setting are executed in this vertically integrated manufacture. Marching to its own beat, the Tambour and its subsequent GMT, chronograph, tourbillon, Spin Time and minute repeater variants are how the world’s most valuable luxury brand expresses the vision of watchmaking. The Louis Vuitton Tambour Twin Chrono is a completely bonkers (translate: savant level) expression of watchmaking: Designed by Léman Cadrans and hand-made by a master enameller, the dial of the Tambour Twin Chrono is composed of a white gold plate with a subtle guilloché, covered by a deep blue grand feu enamel that is sufficiently translucent to reveal the pattern. A world premiere complication which has been registered for patent, this chronograph has the ability to simultaneously measure two distinct times and to display the difference between these two measured times – all at once on the same dial. This innovation has been created by the fine watchmaking workshop of La Fabrique du Temps Louis Vuitton Manufacture and is regarded as a significant milestone in the history of chronograph.

Ever a trailblazer, Vuitton introduced flat-topped trunks in 1858 while the travel goods industry was still producing rounded-top trunks that encouraged water runoff during long voyages. Monsieur Vuitton had correctly surmised that these rendered the trunks unstackable and so, he pioneered his vision of grey, lightweight, waterproof and airtight Trianon canvas flat trunk that allowed the ability to stack them on top of another with ease for voyages. It was revolutionary and in the years following its introduction, other luggage makers imitated his style and design.

Evoking his ethos and adventurous spirit, the maison cuts its own path once again like trans-Atlantic icebreaker vessels of yore. It’s undeniable that mention of Louis Vuitton, calls to mind bespoke luggage, fine accessories and high fashion, and Haute Horology appeared a far cry until they introduced their first high complication in the Tambour Minute Repeater, not even 10 years after its first launch in 2002. Louis Vuitton’s affinity with the world of travel bequeathed us with a different perspective on the minute repeater complication, catering to world travellers much like how Vuitton catered to the global elite of his day; the 2011 Tambour Minute Repeater featured a dual-time configuration, with a second time zone visible in the window at the center of the dial. Unlike traditional minute repeaters, the repeater chimes the time home time (or whatever the second time zone happens to be set at).  Separate sub-dials display the small seconds and power reserve, in addition to a day/night indicator, beneath a smoked sapphire crystal which has a clear, semi-circular aperture that reveals the striking mechanism. It was a legitimate horological tour de force even if the general watch collecting community held immense reservations.

A Journey of Time: Remembering 2002

Keep in mind, trade publication Europastar reported in June 2003 that the Louis Vuitton Tambour had a waitlist for its initial 6,000 production run. In an interview with the title, Philippe Pascal, then President of LVMH watch and jewellery division said, “Louis Vuitton is world famous for the uncompromising quality of its products and this applies equally to its watches that are produced in our Swiss workshops. This is the reason why the timepieces that we have already introduced, beginning with the Tambour, took the watch world by surprise. It was not expecting to see a ‘handbag and luggage maker’ producing such high level watch products. And, that is not all. In 2004, we will introduce a Louis Vuitton tourbillon. We think this ‘timely’ diversification is very promising.” 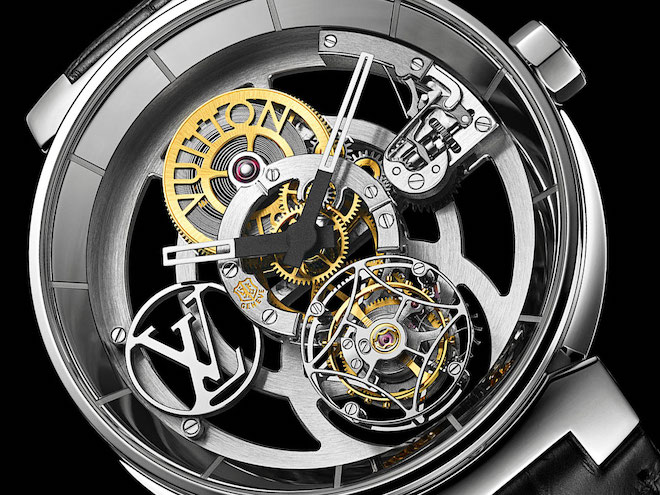 Louis Vuitton has seen its watchmaking know-how go from strength to strength. The Tambour Moon Flying Tourbillon “Poinçon De Genève” is counted among the small group timepieces in the industry certified with the coveted Geneva seal.

In fact, if the time zones and a chiming mechanism reflects the heart of a luggage manufacturer—and specialist in travel, one need only take notice of the fact, that Tambour, whose form and name are taken from Franco-German military timekeepers (playing drums) to keep formation around 1530 and 1540 shows just how far the maison is willing to travel for inspiration. Louis Vuitton’s adoption of this long forgotten bit of arcana as muse resulted in an immediately recognisable drum-shaped design with sable dials that evoked the signature codes of the brand right down its distinctive yellow seconds hand inspired by the linen thread coated with beeswax used in their famous totes and holdalls.

In 2004, this nascent watchmaking ambition was given form with an exclusive watch atelier in La Chaux-de-Fonds, on the logic of the move, Louis Vuitton would declare that they would retain “total control over the production and distribution of our watches.” And as we know, what was once a  network of subcontractors in the Jura region has since become a vertically integrated concern right within the heart of Geneva, led by ex-Patek Philippe stalwart and former Laurent Ferrier collaborator Michel Navas. The Spin Time Air uses twelve cubes, each featuring Arabic numerals and totems on the opposite faces. Ingeniously, at the top of every hour, two of the cubes rotate instantaneously, the cube for the preceding hour rotates to show a totem, while the subsequent cube rotates to show the Arabic numeral to indicate the current hour.

The success of Tambour, through its many models, has largely proven the strength of its design.  Especially when you consider that it’s not widely available and only exclusively distributed through its network of 150 boutiques across the world. In this way, the brand is also innovative compared traditional watch brands, whose distribution an environment of their choosing and to an audience already predisposed to Vuitton’s exquisite lifestyle is a masterstroke. Add to the fact that the Tambour itself is a universal design that accepts movements at all levels of complexity from GMT automatic alarms and to now, the sophisticated yet sportive Tambour Curve Flying Tourbillon, is testament that Louis Vuitton watchmaking is not only here to stay, but to usher a vision of watchmaking beyond the screws on bezel ‘industrial’ trend that the majority of the watchmaking world seems to be on at the moment. Inspired by the Möbius strip, the case of the Louis Vuitton Tambour Curve Flying Tourbillon carries a stretched, elongated shape, with a diameter of 46mm set in the form of a deconstructed circle. From the side, the case band has a continuous curve from one attachment to the other as it follows the natural curve of the wrist.

By admin 40 mins ago