Every spring since 1992, Montblanc introduces the Patron of Art pen collection which pays tribute to those who exemplify the importance of art patronage throughout the world. The stellar names include Peggy Guggenheim, Pope Julius II and the latest being Roman emperor Publius Aelius Hadrianus. The Homage to Hadrian pen collection features gold-coated cones and cap tops, a reflection of the Roman buildings commissioned by Hadrian. This year’s Patron of Art Homage to Moctezuma I continues to be a fantastic example of Montblanc’s expertise in pen making. Artist’s impression of Moctezuma I by World Digital Library

Moctezuma I (1398-1469) also known as Moctezuma Ilhuicamina was the second Aztec emperor and fifth king of Tenochtitlan, ruling from 1440 to 1469. Under his reign, Tenochtitlan, which is now the center of Mexico City, blossomed thanks to social, economical and political reforms. The limited edition designs are released as part of the Patron of Art Homage that honours the remarkable artistic and architectural achievements of Moctezuma I. To coincide with the release of the Patron of Art Homage to Moctezuma I Limited Editions, Montblanc is introducing a fine stationery notebook in red calfskin Saffiano leather embossed with traditional Aztec motifs. 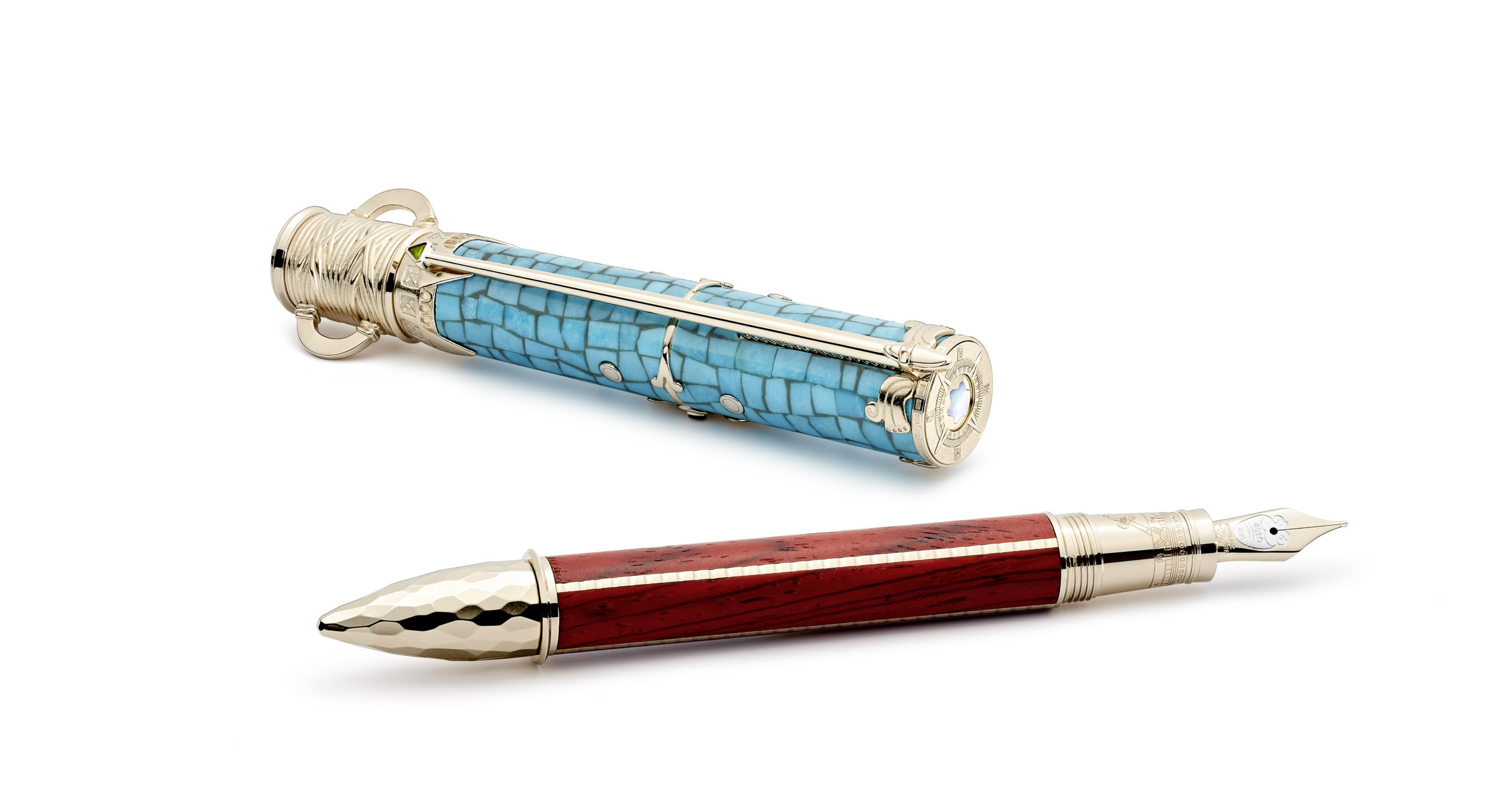 Of the many buildings, sculptures and botanical gardens constructed, Moctezuma I paid particular attention to the new temple to Huitzilopochtli, the deity of sun, war and creation. Today, the temple is known as Templo Mayor. The Montblanc Patron of Art Limited Edition 87 pays homage to 1987, the year Templo Mayor was added to the UNESCO World Heritage list. 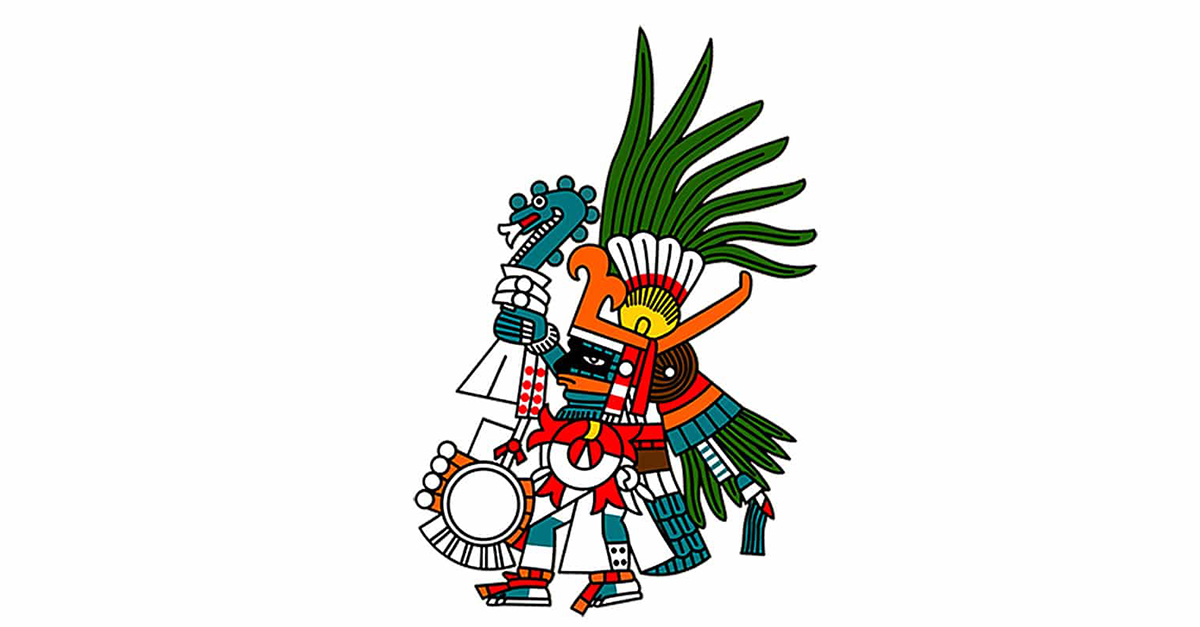 Turquoise, favoured in Aztec decorative craftsmanship, richly adorns the cap. No two pieces are identical as the designs of the 87 caps differ slightly from each other. A refined mosaic features a specially treated Au 750 solid champagne-tone gold inlay to create a vintage distressed look mimicking those found in ancient artefacts. It is further set with jade cabochons and a central Aztec motif symbolising the ‘five suns’ creation myth.


Precious cocobolo wood, used as a tribute to the famous El Sargento tree planted during the reign of Moctezuma I, forms the barrel. A special reference to the Templo Mayor is made with four stepped solid gold bands. The mother-of-pearl Montblanc emblem on the cap top is embedded in an engraving of an Aztec sun disc. The handcrafted Au 750 solid gold nib is adorned with a fine engraving inspired by the Aztec glyph for the heart, a symbol for sacrifice. A further glyph engraved on the forepart represents the second name of Moctezuma I: Ilhuicamina. 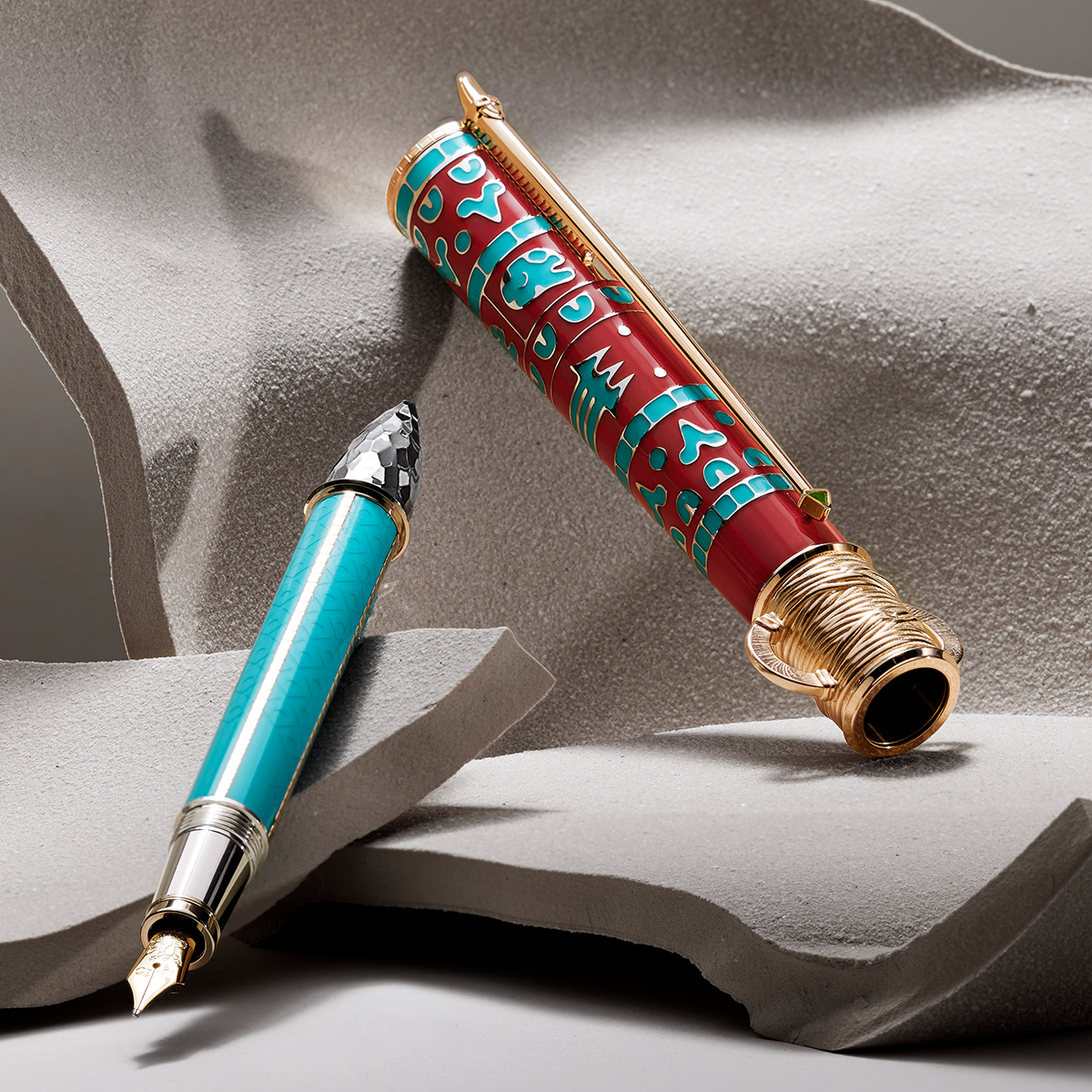 The Montblanc Patron of Art Limited Edition 888 is inspired by the royal garments of Aztec culture. Turquoise and carmine red, both highly revered by Aztecs form the colour codes of the Ag 925 sterling silver cap. The intricate engravings represent Moctezuma’s weapons, skulls and traditional Aztec’s ornaments. A spear-shaped clip is refined with an engraving of the quetzal’s feather and set with a triangular-cut green jade. Montblanc’s iconic emblem set in mother-of-pearl is embedded within an engraving of the Aztec sun. 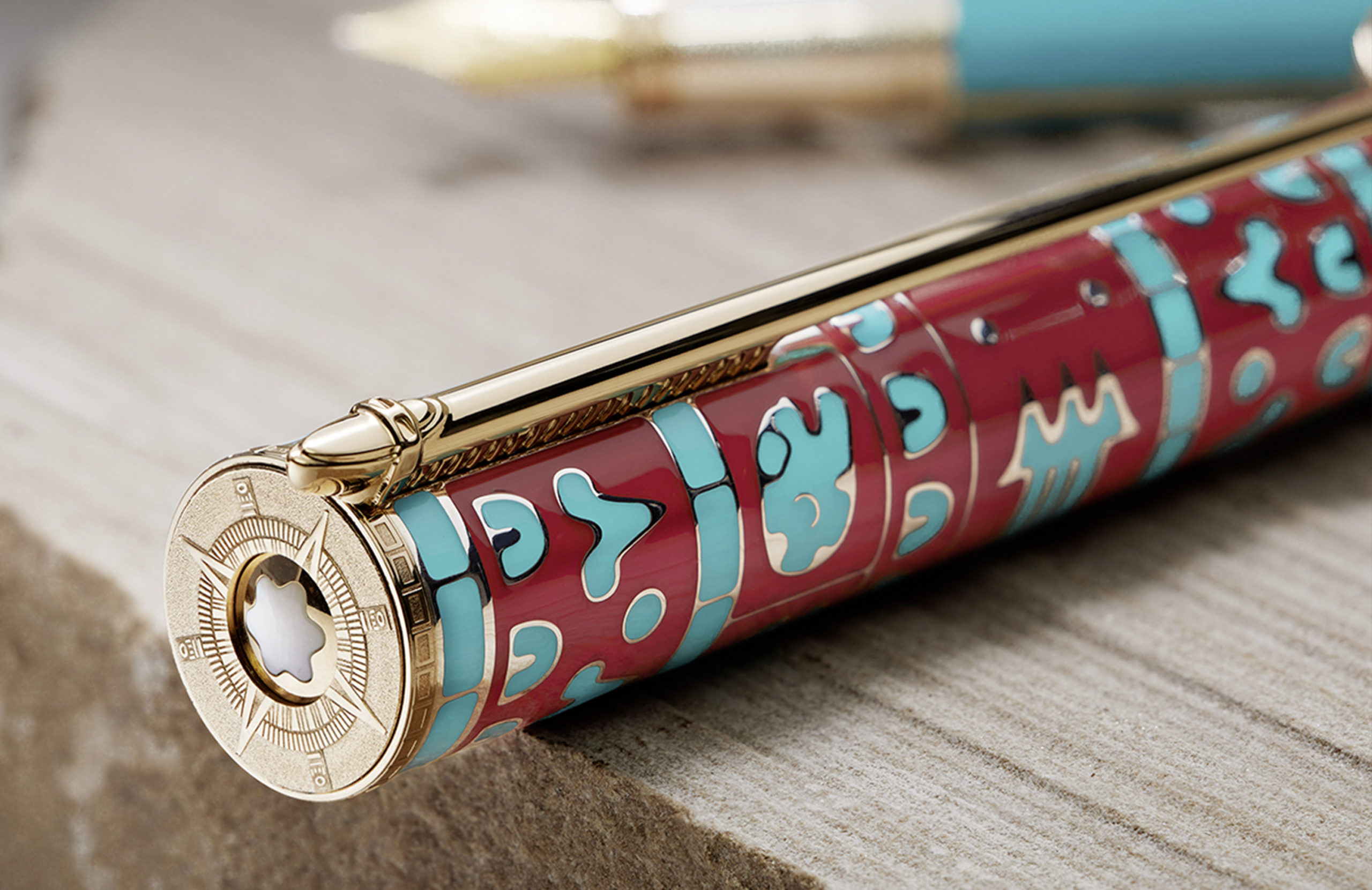 The lacquered turquoise barrel is engraved with a pattern reminiscent of Moctezuma’s cloak. Four Au 750 solid champagne-tone gold lines evoke the cardinal directions that radiate out from the Templo Mayor. It is finished with a handcrafted Au 750 solid gold nib adorned with the Aztec glyph for the city of Tenochtitlan and a hammered-cone in contrasting Ag 925 sterling silver. In honour of Moctezuma’s credentials as a great warrior, the shape of the Montblanc Patron of Art Homage to Moctezuma I Limited Edition 4810 is inspired by the atlatl, an Aztec spear throwing weapon. Clad predominantly in champagne-gold tones, lacquered petrol and carmine red are the choice of colours for the cap and barrel respectively. The pattern on Moctezuma I’s cloak, a symbol of his high rank can be found on the cap. 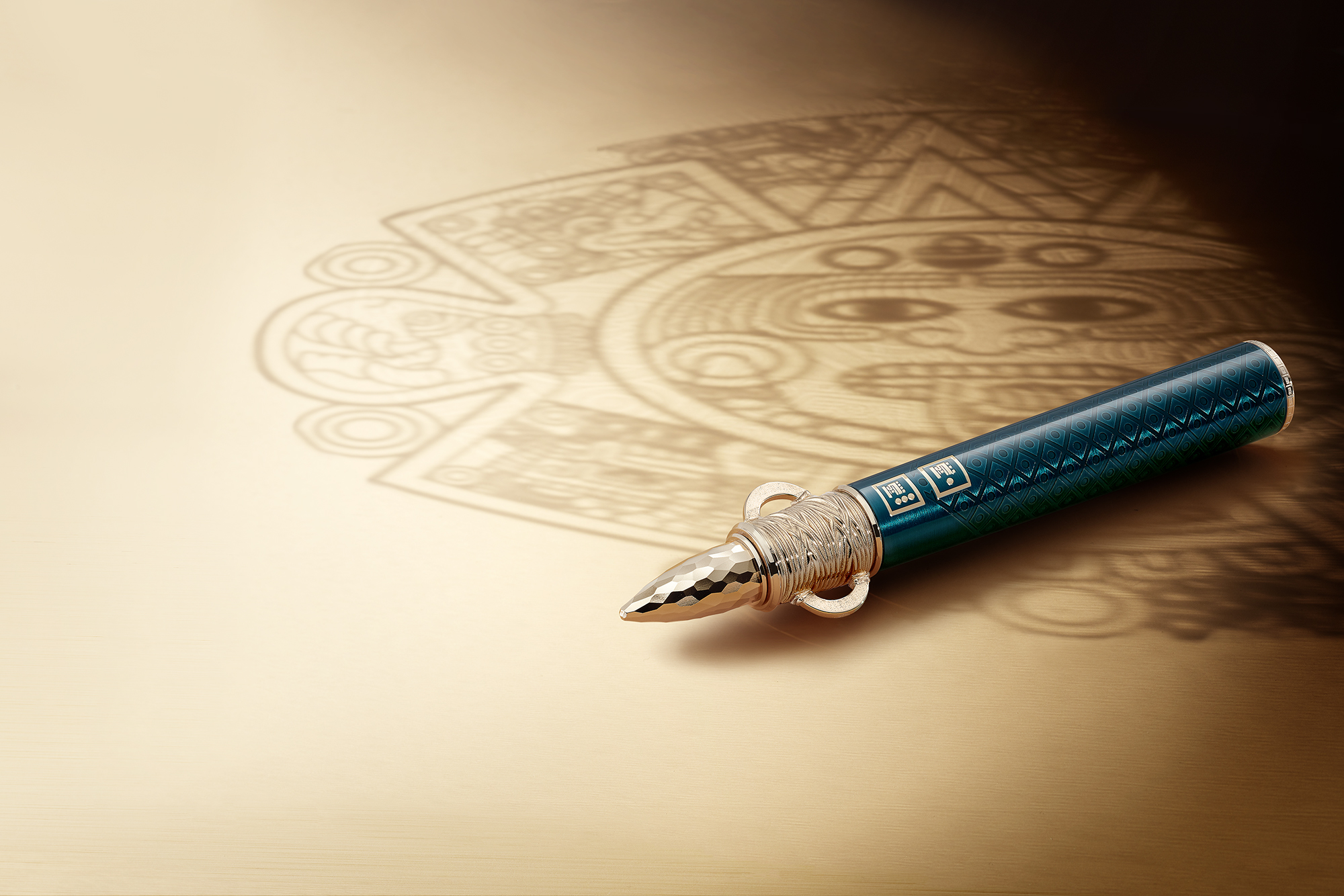 The cap features a design reminiscent of the atlatl’s thread-wrapped handles, it is embellished with two Aztec glyphs taken from the Mendoza Codex that indicate the years in which the reign of the great Aztec king began and ended. A spear-shaped clip, refined with an engraving of a Central American quetzal’s feather at the top and crowned by a red triangular cut stone is attached. Montblanc’s emblem in precious resin is embedded in an engraving of the Aztec sun on the cap top. 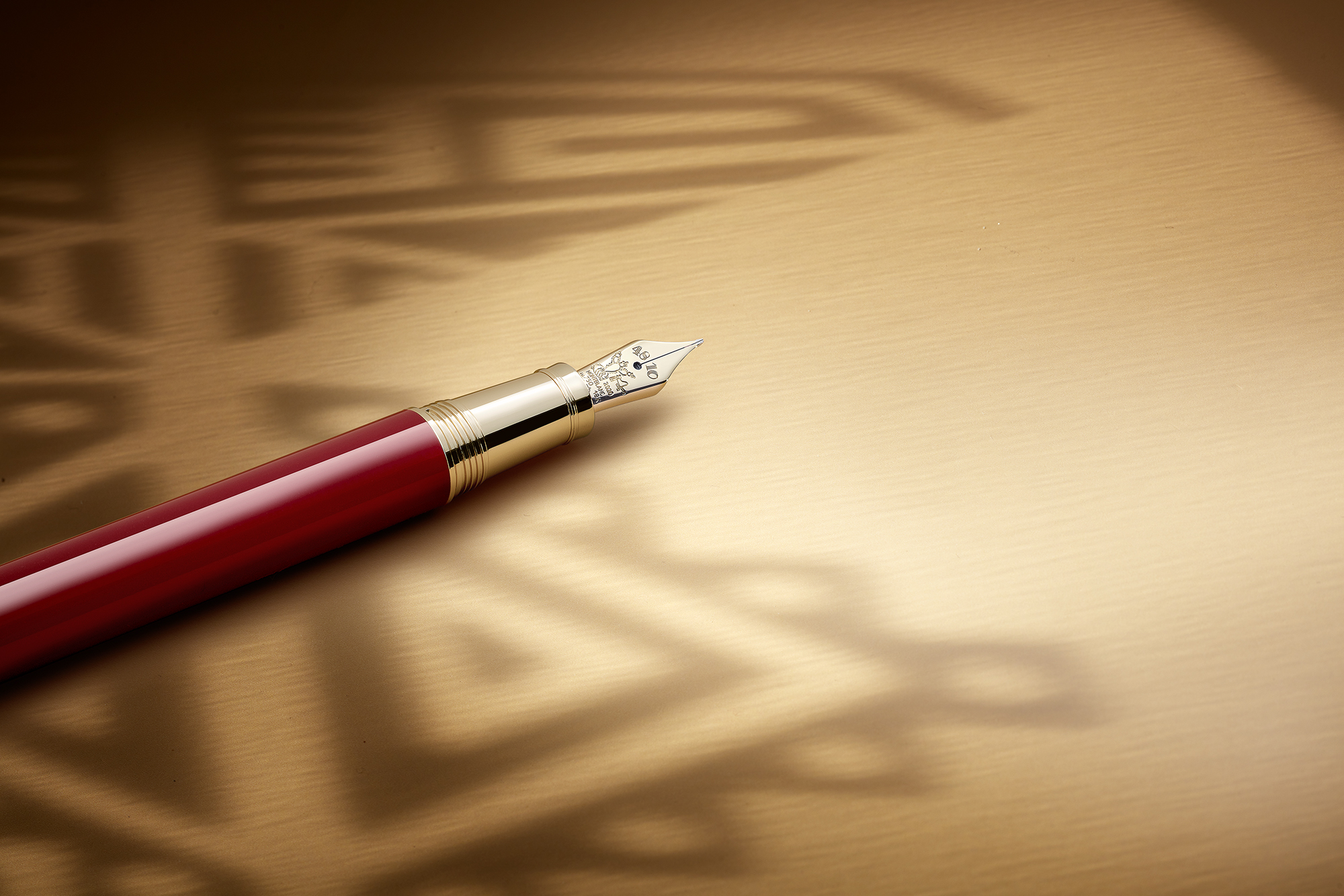 The handcrafted Au 750 solid gold nib is adorned with a fine engraving inspired by the Aztec glyph for the city of Tenochtitlán: a three-armed cactus with a royal diadem and two scrolls. A hammer-finished cone, is based on a traditional Aztec sacrificial knife with an obsidian blade.