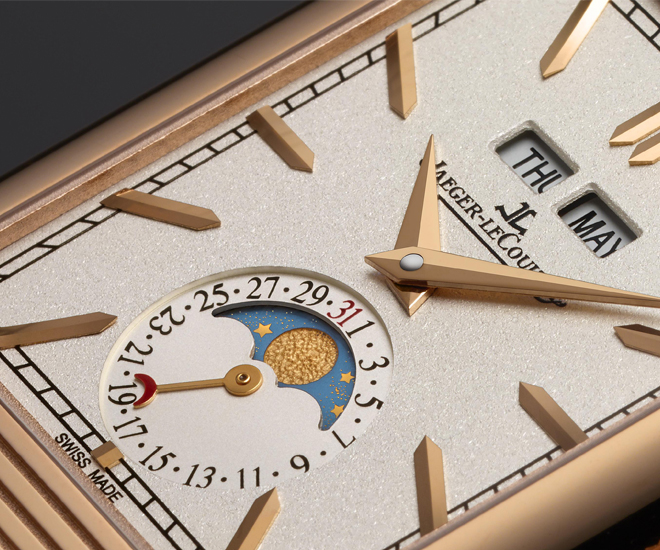 The idea of starting a watch complication buying guide has crossed our minds here at WOW on more than one occasion. A quick search on Google will yield an endless list of such guides, and WOW was founded on the principle of acting as a buying guide. How would one by WOW be different then, given that the Internet has upended such discussions? Well, instead of a generic watch buying guide, we thought to start a series instead, with each article focused on a different complication. What better way to start than with the quintessential calendar watch.

Before diving into it, let us have a quick history of how the calendar was invented so keep this issue (or story once this goes online) handy for that inevitable moment that we get into the perpetual calendar. On that note, this story does not include a discussion on the perpetual calendar, because high complications require an altogether different approach. That said, let us get on with this show.

The current calendar used is what is known as the Gregorian calendar, so-called for reasons that will become obvious shortly. Prior to the current calendar, several systems existed, with some still in use today. The solar day is considered the earliest form of calendar indication, measuring periods of darkness and brightness; basically day-night indicators, to use watch terminology. 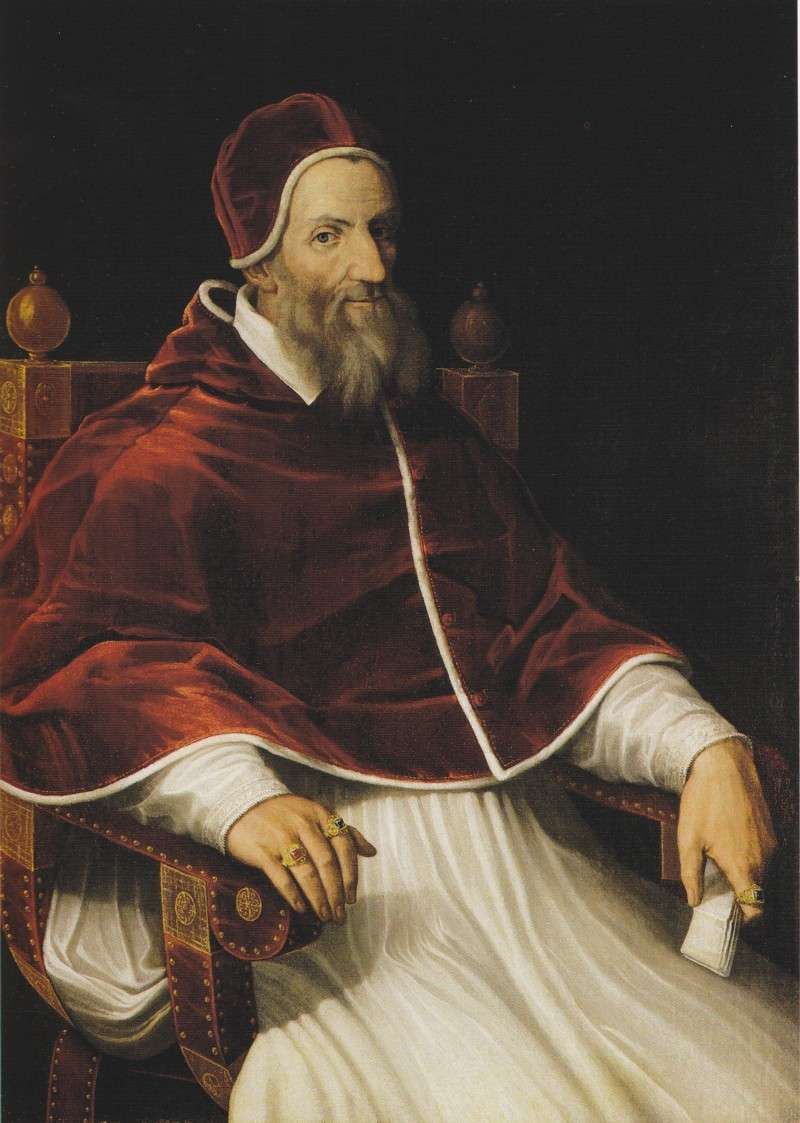 The lunar Roman-era calendar was later introduced, and yes it was lunar originally; indeed most cultures used the lunar calendar as it was easier to denote months in this way, and even divide those months up based on the phases of the moon. In the aforementioned lunar calendar, 304 days were spread across 10 months — Martius, Aprilis, Maius, Junius, Quintilis, Sextilis, September, October, November, and December. Circa 700 BCE, the mythical Roman King Numa Pompilius reformed the calendar by combining both solar and lunar tracking, thus increasing the number of days in a year to 355 days. This resulted in the addition of Januarius and Februarius as the Roman calendar did not align with the seasons.

The revised system was still filled with flaws prompting Julius Caesar to mandate the Julian Calendar in 45 BCE. It marked the start of the solar calendar, with more days added to bring the total to 365 a year. The final amendment came on 24 February 1582, called upon by Pope Gregory XIII and named the Gregorian Calendar in his honour. This allowed the realignment of events such as the Vernal equinox and Winter solstice and the accurate celebration of Easter. The Gregorian Calendar averages 365.2425 days per year consisting of 12 months each with 28 to 31 days.

With this handy introductory text out of the way, here are some factors to consider when buying a calendar watch.

Before pulling the trigger on your next calendar watch, ask yourself this — are you buying the calendar watch as a functional tool or purely for aesthetics? If it is the former then consider legibility an important factor because it is pointless if one is not able to make out the complication. The print dimensions of calendars are not big, an ETA 2824-2 date font measures 2.7mm by 2mm while the day-date ETA 2836-2 fonts measure 7.8mm by 2mm. Needless to say, legibility also impacts aesthetics, as will become evident. Legibility of windows can be improved by magnification. The Rolex “cyclops” developed in 1953 comes to mind straightaway. Legend has it (though not confirmed by Rolex) the famed attachment was introduced to aid an ageing Betty Wilsdorf-Mettler read the date better. Apart from Rolex, the magnifier can be found on other watch models, though placed beneath the crystal, such as Chopard’s Mille Miglia and Louis Vuitton’s Tambour. Typically, magnification goes up to 2.5x.

Outsizing dates is another method of improving legibility, commonly called “big dates.” German watchmakers A. Lange & Söhne and Glashütte Original share similar approaches with their signature outsized date complication — two discs are used, the tens mounted atop the units disc. The A. Lange & Söhne date displays are three times as large as regular date displays. Ebauches such as ETA 2826 and ETA 2892-A2 are cheaper alternatives that offer an outsized date. 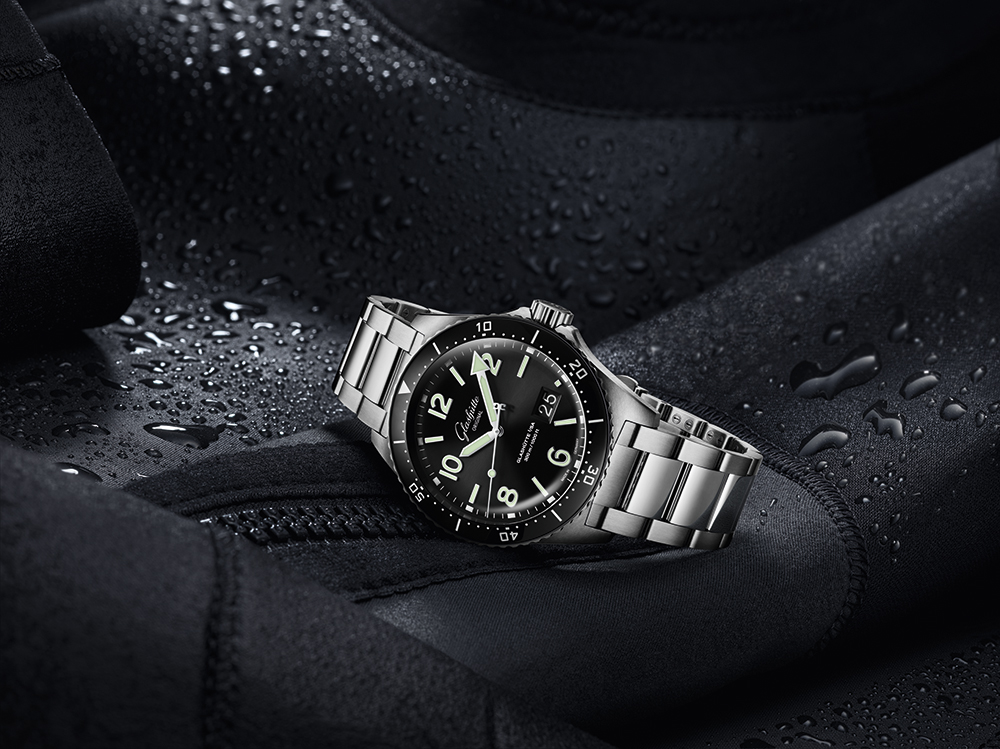 Improving the legibility of calendar subdials by enlarging typefaces and subdials is constrained by the size of the dial and indeed of the watch, and the implications this would have on the movements. What is relatively easy to control however are colours of the dial, font selection, and text printing, which affects the readability. Contrasting colours such as a black dial and white text would provide more contrast than a blue sunburst dial and black text. That said, pick colours that not only suit your taste but also the readability of the dial.

A golden rule when adjusting calendar watches is to not make corrections between 9pm and 3am as the cams and gears are engaged to move the various calendar rings during those hours. Advancing or reversing their progression could potentially cause gears and levers to be displaced or misaligned; the severity of damage increases as the complexity of complication increases. This has spurred manufactures to develop safety indicators and mechanisms to minimise damages and the need for repairs and servicings. 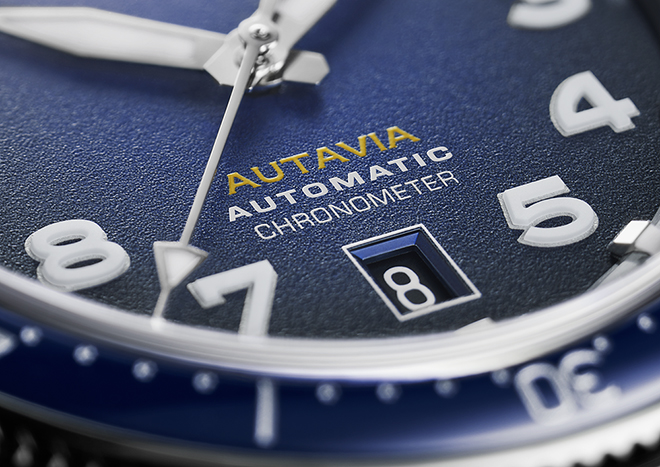 Security zone indicators found on Patek Philippe and Jaeger-LeCoultre’s highly complicated calendar watches warn wearers not to make adjustments via specific colours. However, these are essentially day and night indicators that hope to capture the attention of owners.

The MB&F LM Perpetual designed by Stephen McDonnell and Montblanc’s perpetual calendar calibre MB 29.22 are equipped with true safety functions. The calibres automatically deactivate and disengage the adjustment pushers between 8pm and 12pm to prevent accidental corrections when the calendar changes. Montblanc takes it a step further with the omission of cams in the calibre construction to allow the dates to be corrected both forwards and backwards.

Simpler calendar watches tend to not have such safety features, so being cautious and sticking by the golden rule is the best safety measure your calendar watch could have.

The manner in which a calendar is able to be manually adjusted can either make the task a breeze or a pain to perform, especially when setting a watch that has been sitting on your dresser for months. Ease-of-use is typically impacted by the watch component to initiate changes, usually in the form of the crown, pusher or side adjusters. 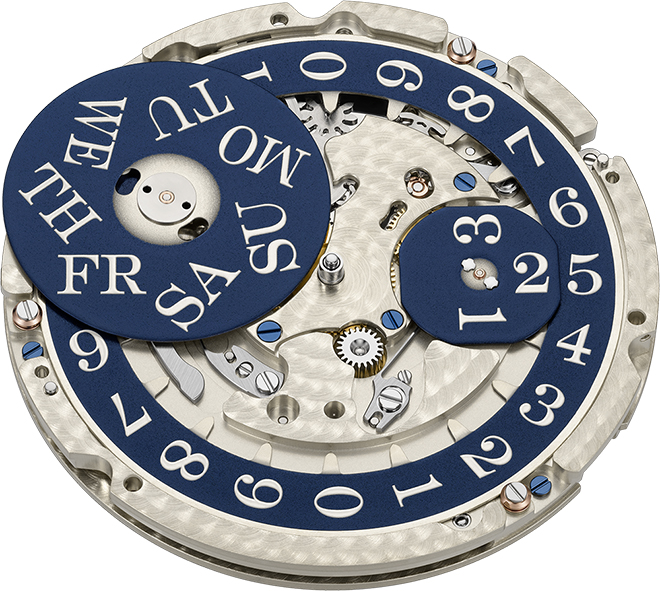 The A. Lange & Söhne Calibre L155.1 Datomatic of the Odysseus features an outsize date and day-of-week display controlled by pushers.

Apart from winding the watch and setting the time, the crown controls the date-setting function in most simple date and day-date watches. The primitive method was, and still is, to rotate the hour hand repeatedly through 24-hour cycles to advance the calendar forward. The semi-quickset provided some respite when it was invented. One would rotate the hour hand to 12 midnight to initiate the first date jump, before reversing the hand back to 9pm then forward again to 12 midnight to initiate the next switch. This is then repeated until one reaches the desired date. While this was an improvement, it causes great wear and tear to the crown stem.

The quickset was later devised to advance calendar features faster. The single quickset typically allows the date to be advanced forward independently by using the first position of the crown while a double quickset controls the date and, usually, the day function. Another method known as the “jump hour hand” commonly seen on GMT and travel watches allows the hour hand to be rotated in one-hour increments to advance the date. 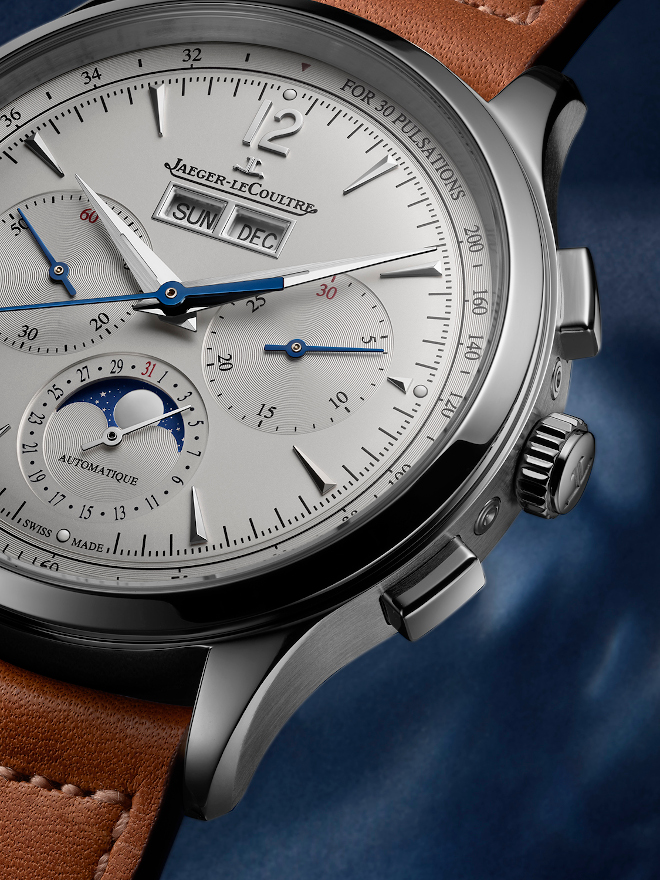 Close up of the side adjusters


Pushers and side adjusters, respectively shaped like chronograph pushers and little buttons flushed to the case, are other ways to advance calendar indications. Pushers are connected to the date in most instances while side adjusters control other calendar elements. Complicated calendar watches such as triple or full calendars, annual and perpetual calendars can have up to four adjusters including one for a moonphase.

Between the crown, pusher and side adjusters, the former two offer the most convenience simply because they can be actuated easily. The side adjuster would require a correcting tool, often a stylus of sorts, which may scratch the watch if one is careless, and not readily available when out of home.

If one has the chance to examine one’s calendar watch close to midnight, one may notice calendar apertures and pointers midway through their progressions. Some watches complete the transition after 2am while others abruptly at the stroke of midnight. Some owners prefer the crisp switch while others are less annoyed with gradual roll-overs. The difference in changeovers is due to the mechanisms within the movement. The direct-drive or gradual roll-over is the earliest method found in calendar watches as the date disc is in constant engagement with the 24- hour wheel resulting in roll-over changes. This is more apparent in triple calendars when multiple gears are engaged to change the date, day and month, causing a slow roll-over.

The semi-instantaneous change, more commonly seen in present day movements, relies on the “date jumper” mechanism to progress the date. A mounted finger on the 24-hour wheel starts to engage a tooth of the date disc as it approaches midnight. The spring-loaded jumper drags the date wheel, dragging it along and finally snapping to display the next date.

The instantaneous change is the more advanced feature. A spring is gradually loaded by a levered cam pushed against it by a post attached to the going train. It releases at midnight causing the date to change in a flash. The instantaneous date change was another feature championed by Rolex in 1955.

It is worth noting these features are not exclusive to date watches but can be found in all calendar watches in general. However, take note that prices increase when advanced features are used in complicated calibres. An instantaneous annual calendar would cost a bomb as one could imagine.

Before asking if a calendar watch is still relevant, consider this. A calendar watch is not only a mechanical computer but also an artistic representation of the passing of time. Layers of mechanical artistry must work in perfect harmony to present a seemingly simple result: what day it is. 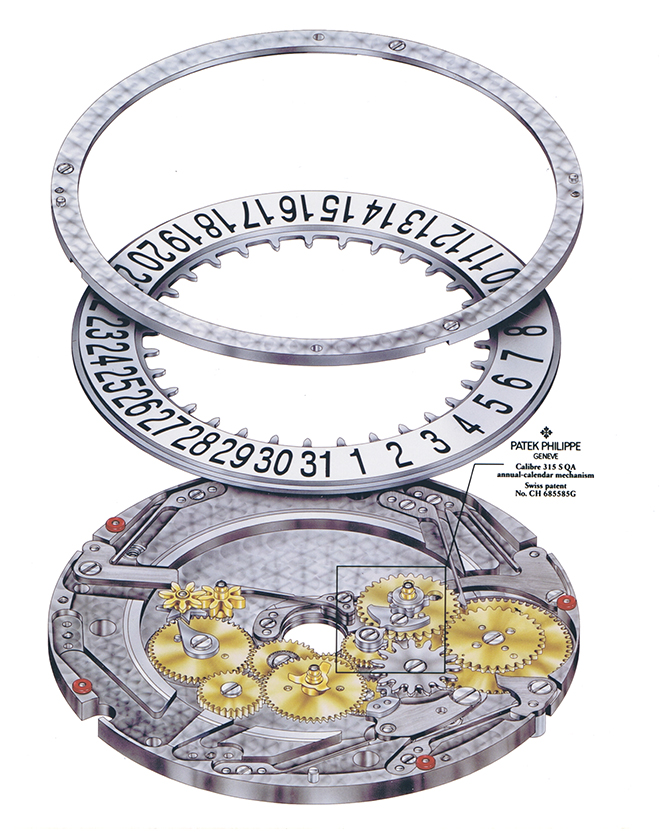 The annual calendar was patented and first introduced in 1996 by Patek Philippe when they unveiled the Patek Philippe Annual Calendar ref. 5035J and calibre 315 S-QA. Though it shares resemblance to the triple calendar, the movements operate differently.

The annual calendar automatically adjusts the date based on the 30- or 31-day months. A month wheel sits atop the 31-tooth date wheel with different lengths. The shorter and longer months of the year are depicted by tall lobes and gaps respectively. A rocker or “dolphin” cam named for its uncanny semblance sits next to the month wheel, initiating a skip on the date wheel when it falls on a short month. However, it does not take into consideration leap years hence the need for one manual adjustment when February gives way to March.

Contrarily, the triple calendar does not take into account months with fewer than 31 days, hence the need for manual adjustments five times a year at the end of February, April, June, September and November.