We can see style icon James Dean rocking the hell out of this polo shirt, sitting on the bonnet of a red Corvette, Marlboro Red perched on his bottom lip. Cop your own little bit of Dean and hotfoot it over to independent menswear brand Far Afield, which was inspired by the Hollywood legend when it collaborated on the shirt with Hong Kong label, Craftsman Clothing. We’ve been expecting you Mr P, the latest iteration of the in-house label at tastemaker and online retailer Mr Porter. As always the whole edit is so stylishly easy-to-wear you might as well live in it, a relative smorgasbord of oversized overcoats, chunky-soled derbies and winning knitwear like this geometric gem carved out of a chunky merino wool. The signature Ugg, a soft, sheepskin boot, isn’t the easiest shoe to circumnavigate the winter weather. But with these new harder-wearing hiking boots from the American shoemaker you can take your sheepskin on the road, thanks to a technical Vibram sole giving you grip and a seam-sealed construction keeping the cosy lining inside dry. Swiss watchmaker Certina, has come up with an absolute jewel with its latest dime-piece, an update on its popular DS Concept model, which is also celebrating its 60th year. The dazzling green dial stuns as does the 80-hour power reserve and Swiss engineering at a snip under £1,000. Mod rocker Miles Kane is a perfect fit for British heritage brand Fred Perry, and the relationship between the pair has been fruitful, with this latest team-up the fourth between the two. Most of the pieces are cut in Kane’s signature slim fit, including this tee set apart from he rest thanks to a pique construction like you’d get on a classic Fred Perry polo. Unisex and easy-to-wear streetwear by way of London town is the M.O. at Flaash Apparel. It makes for some handsome pieces like this heavyweight hoodie, cast in a flash forest green that steals all the attention and a neat handshake motif embroidered on the front. If you’re an Acronym-shipping techwear ninja, this is the backpack for you. Crafted by serious British bagmaker Troubadour, this is as hardwearing and versatile as a backpack can get with a waterproof outer fabric, a breathable back panel so you don’t get a soggy tail end, an abundance of dinky hidden pockets and a nifty trolley sleeve that lets you slide the sack over a suitcase handle. From the minds behind sustainable grooming hero Bulldog Skincare, Waken is a dental care brand hoping to shake up (and swish around) our teeth-brushing routine. Teeing things off with a selection of four minty (and surprisingly tasty) mouthwashes, the aim is to take a bit of the pain (and bad taste) out of post brush swilling. Just remember not to swallow. After nearly 200 years of perfecting seasonal menswear, Woolrich is getting on down with the kids by joining forces with one of the hippest and stylish brands in the world, Aime Leon Dore. The latter’s retro sportswear vibes come forth strongly in this 100 per cent wool jumper with multi-colour ribbed trims and sweet-as-you-like inlaid lettering across the front. When it comes to RAF flying aces, Douglas Bader will surely go down as one of the greatest. To honour the legendary pilot and his 22 sterling aerial victories, British pilot watch specialist Avi-8 is releasing three special watches inspired by its countryman. Key features include a dial fashioned after the cockpit of Bader’s plane and second hand in the shape of wings, with part of the proceeds going to the disability foundation named after the great. Remember, not all cord is created equal. You get your fine needle cords, which look best on pieces that lean towards formalwear and then you get big, jumbo cords like the ridges on this corduroy jacket by relaxed menswear brand Farah. The result is the perfect casual jacket for Friday night, with a velvety sheen that’s going to make that blue beam under the bright lights of the city. We named the Aries x New Balance 991 our sneaker of the week last week, but not content with just making the sneakerheads drool, the cult streetwear brand and American sportswear giant have also released a range of apparel. So keep your feet on-brand with these punchy lime-green socks finished off with that all-important dual branding. The most ostentatious streetwear brand of the lot meets the most ostentatious designer bag brand, as BAPE teams up with MCM for a collection of camo-laden bags, hoodies, and tees. All the motifs are there, including the BAPE ape and a rather nice blending of the two brands’ stand-out colourways. You’ll know Molton Brown from the ‘posh’ soap your mum keeps under lock and key in the master bathroom. But the personal care company also does a really fine line in fragrances, including this new scent inspired by the roaring twenties which rests heavy on a boozy brandy at its heart and a smoky base of tobacco and incense. The half-zip sweater was a must-nab in this summer of 90s throwbacks. But don’t throw them out now we’re knee deep in autumn, with pieces like this lovely jubbly Adidas pullover able to bring all the streetwear cred you need as a fleecy mid-layer under an overcoat during this coming winter. Be prepared for the very worst winter can throw at you with the new Stormforce collection from the outerwear experts at British heritage brand Barbour. It includes pieces like this stylish all-white padded jacket that’s made out of recycled fabric and comes with a button-close storm guard so you can keep that fleeced lining all to yourself. The ’00s called and it wants its sneakers back. A collaboration between New York skate brand Bronze 56k and English sportswear creator Reebok, this is a re-invention of a classic 00’s Reebok silhouette, with a classy black and turquoise colourway, luxe suede overlays and a logo repping dual branding Looking for some slick but cushy joggers to walk the hounds in? Let us lead you in the direction of high street stalwart Topman then and this eye-catching pair of houndstooth joggers, a statement bottom half if we ever saw one. Place with a neutral shaded hoodie up top to tee the look off. It’s November now, and with party season just around the corner, it’s time to think of how you’re going to ritz it up for the Christmas party. We’re inclined to pick out something you can wear past Christmas like this golden jersey shirt from Reiss that’s going to shine under the mistletoe but will also blend in effortlessly under your staple camel coat. 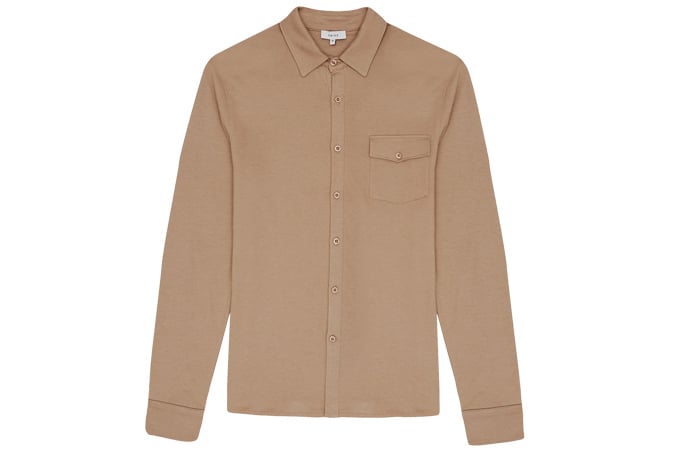 Give your bonce some respect with this ribbed beanie from independent menswear brand Peregrine. It’s been knitted out of top-notch merino wool that’s not only durable and soft but will also help to regulate your body heat while the shade of green is versatile enough to go with pretty much any outfit combo.