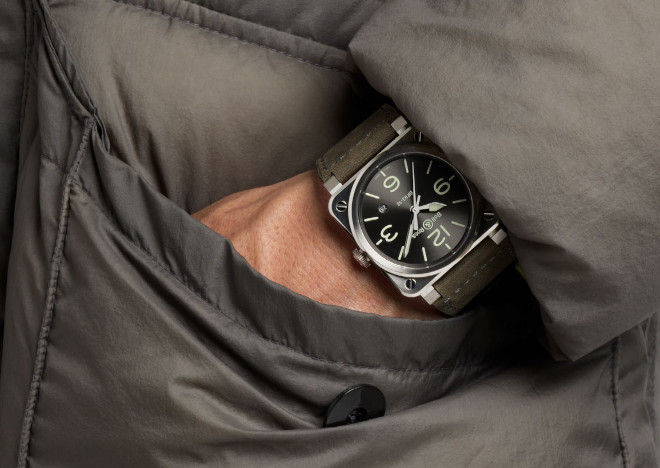 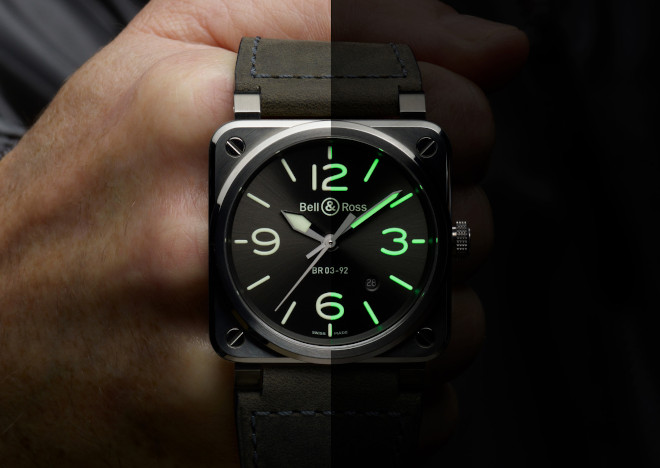 The need for Cockpit task management (CTM) training is a result of limited human attention and the limitations of working memory, hence aeronautical specialists like Bell & Ross design instruments which reduce tasks which compete for pilot attention demanded for nominal aviation and the immediate safety of the aircraft – instruments like the Bell & Ross HOROLUM collection.

Debuting in 2017 with the BR03‐92 HOROLUM line, Bell & Ross newest watch is the BR03‐92 GREY LUM, keeping the “LUM” suffix of “lumière” (light) collection alongside the BR03‐92 NIGHTLUM and, more recently, the BR03‐92 FULL LUM. Luminosity has been an important feature in legibility and highlight important information for modern aviators.

During the early 1940s, the Telecommunications Research Establishment (TRE), operators and innovators of radar devices, discovered that Royal Air Force (RAF) night fighter pilots were having coping with verbal audio instructions of radar operators as they approached their targets. But experiments soon revealed that a lit screen in a darkened cockpit during a night mission would hamper night vision also so TRE developed a new method, pioneering “augmented reality” in October 1942 projecting images from the radar tube onto the standard GGS MK. II gyro gunsight onto the windscreen – a progenitor of the first Heads Up Display. 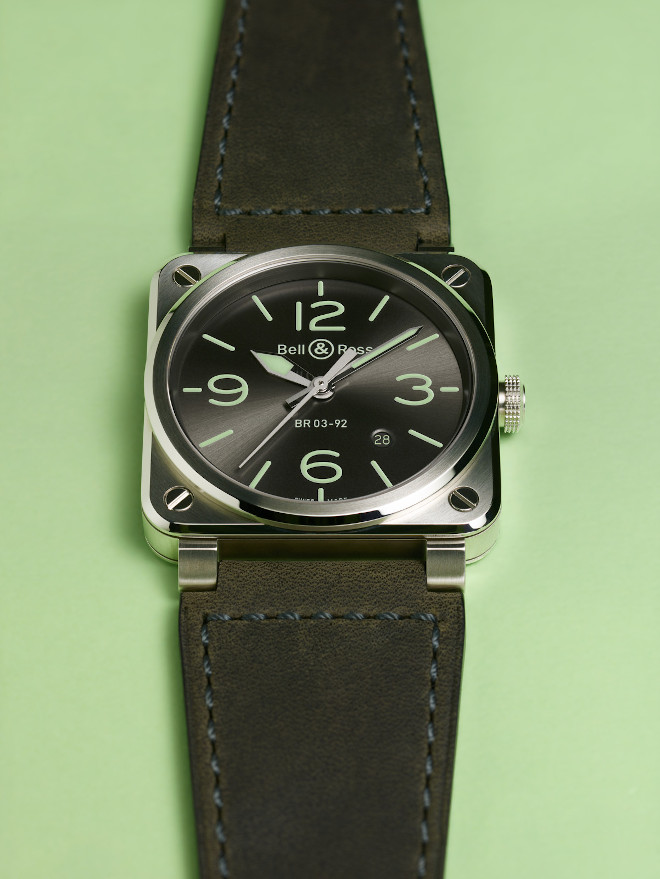 The new Bell & Ross BR03‐92 GREY LUM follows these aviation design principles by depending on extremely powerful Super‐LumiNova® C3 to “project” time display straight from the wearer’s wrist into their field of vision. This improvement in legibility is analogous to the new cockpit instrument where pilots flying with the new gun-sights were becoming better at piloting their aircraft because they could focus on aviating and without being unnecessarily distracted by other piloting minutiae.

The BR03‐92 GREY LUM with micro‐blasted steel or matte ceramic cases, have exceptional display qualities, more importantly, it has a cohesive design language which expands upon French test-pilot Gilbert Klopfstein’s modern HUD system and its standardised layouts, meaning that pilots could easily transition between different models while centralising critical time display within the pilot’s field of vision increasing the wearer’s “scan efficiency” – that is to say, “time at a glance” while reducing “task saturation” i.e.  not requiring to spend extraneous time trying to discern if you’re glancing at hours or minutes. 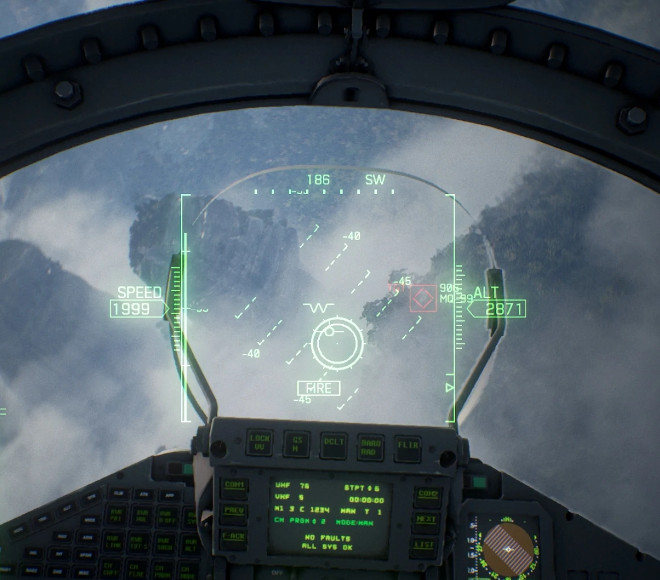 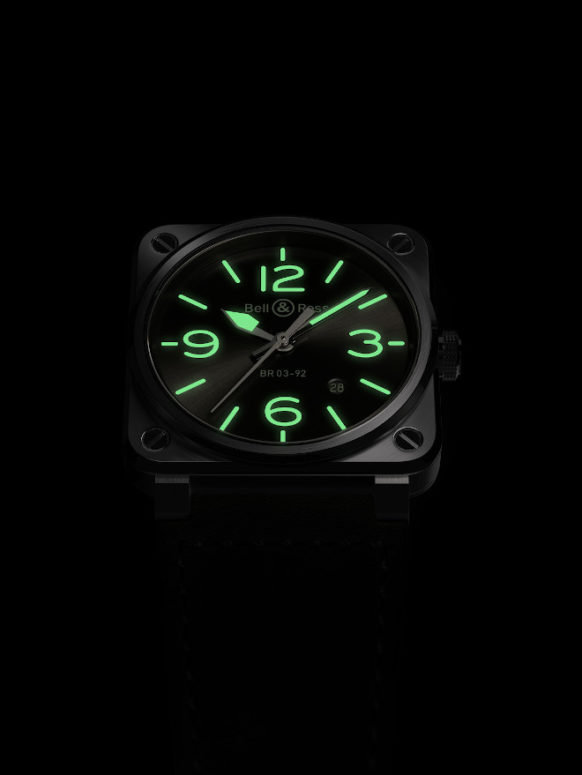 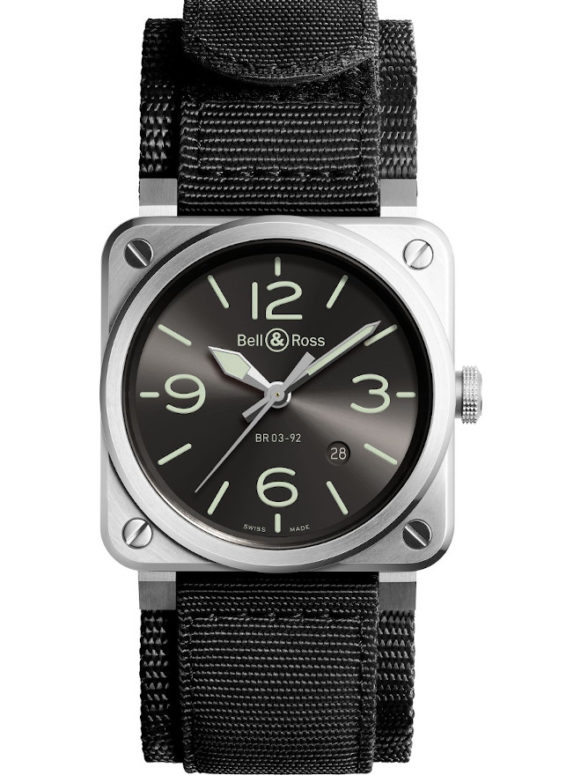 Classic Bell & Ross style of display ‐ the effectiveness of which speaks for itself – is present on the latest Bell & Ross BR03‐92 GREY LUM, everything is paired back and reduced to the cleanest of aesthetics – a militaristic if fashionable anthracite colour palette. The luminance of the face of the BR03‐92 GREY LUM follows the pioneering aviation display standards set forth by Klopfstein – high contrast, regardless of ambient lighting and conditions e.g. the glare of bright clouds or moonless night approaches to minimally lit fields.

Reminiscent but without the radiating toxicity of vintage tritium military watches, the BR03‐92 GREY LUM’s Super‐ LumiNova C3 does not deteriorate over time while capable of quick photoluminescence recharging and exceptional light intensity qualities, boasting optimal legibility in both day and night conditions. 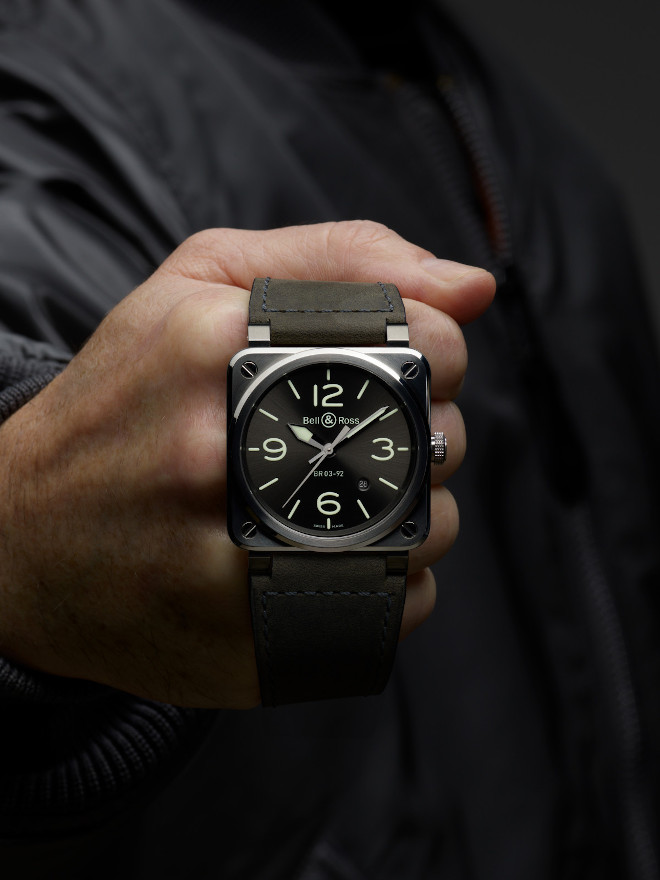 Aesthetically speaking, the face bears an anthracite grey colour and gorgeous (but not distractingly so) sunray pattern, the hour and minute hands, large cardinal numerals and indexes endowed with the intense C3 recalls the lights found on airfields. The mid case, a signature form for the brand –  a square case evocative of aeronautical and aviation instrument panels adds further reinforcement of the iconic Bell & Ross “circle in a square” design.

Quote of the Day
Charlotte Bronte
Life is so constructed that an event does not, cannot, will not, match the expectation.
Ashburn