A fully operational F-16 military fighter jet has just been privately listed for sale for US$8.5 million.

The military plane – a 1980 F-16A/B Fighting Falcon – was procured from Jordan, where it was originally based. 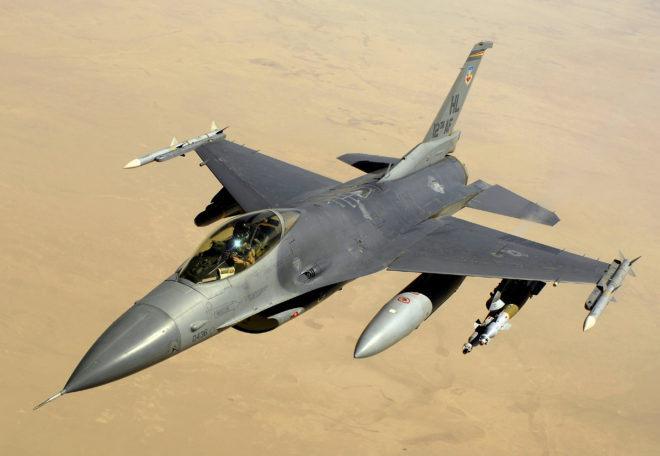 This 1980 F-16 Fighter Jet that was once flown during Operation Desert Storm in 1991, is now being sold for commercial use, with most of its parts in tact, for US$8.5 million

While most F-16s sold privately are often demilitarised before hitting the market, this particular combat aircraft is being sold as is (well, almost – a 20-millimetre M61 Gatling gun has been removed, in case you’re wondering). Still, this makes it one of the most unique fighter jet listings of late, considering that almost of all its pre-sale parts are still in tact.

These include fairly recent upgrades such as a Link 16 data network link, a night-vision compatible cockpit, night-vision comptaible helmets, a processor bus for guided weapons, as well as a Joint Helmet Mounted Cueing System.

Additionally, the Falcon has completed an estimated 6,000 hours in air frames, but has received clearance in the form of the Falcon Structural Augmentation Roadmap that will allow it to fly another 2,000 hours. Depending on the intensity of usage, this works out to be at least another 10 to 15 years of flying.

And that’s not all. Because it is still combat-enabled, buyers (namely contractor air service providers, who this is specifically being marketed to) must comply with the International Traffic in Arms Regulations’ rules that limit who can acquire and operate a weapon system like this F-16. The rules have been put in place to control who can have access to these machines, much more fly them.

So if you’re a tycoon looking to purchase this serious aircraft in place of the latest sportscar for your own personal collection, the barriers are pretty high on this one. But hey, it’s certainly a breath of fresh air and an intriguing listing worth learning about.

Quote of the Day
Chinese proverb
A gem cannot be polished without friction, nor a man perfected without trials.
Ashburn