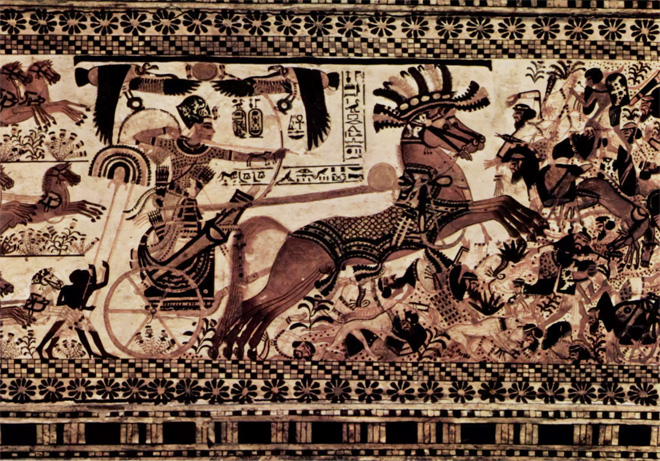 From transportation to communication, war and agriculture, the horse was an integral part of human history, not to mention the catalyst for our own ascent to civilization. Although the horse was domesticated well before 4000 BC, it was not an animal large enough for riding to become practical, but it was only just before the turn of the second millennium that the nomadic peoples of Central Asia have begun to breed. the animal must be more functional than just a pack animal or an animal working in agriculture.

In search of the origins of horse riding, it is important to note that the extension of the practical applications of the horse beyond simple agriculture has been decisive for the Scythians. Known horsemen, they invented the first saddle and the first stirrup, but more importantly, these breeders have left their mark in history with the horse’s most practical (read: deadly) use. Among the first civilizations to master mounted riding, their vaunted equestrian skills, associated with the use of composite arches on horseback, made them the first mobile fighting force of ancient history. . At the time of Alexander the Great, cavalry tactics were fairly advanced and Alexander’s “companion cavalry” was perhaps the most efficient and powerful military unit in the Mediterranean world. 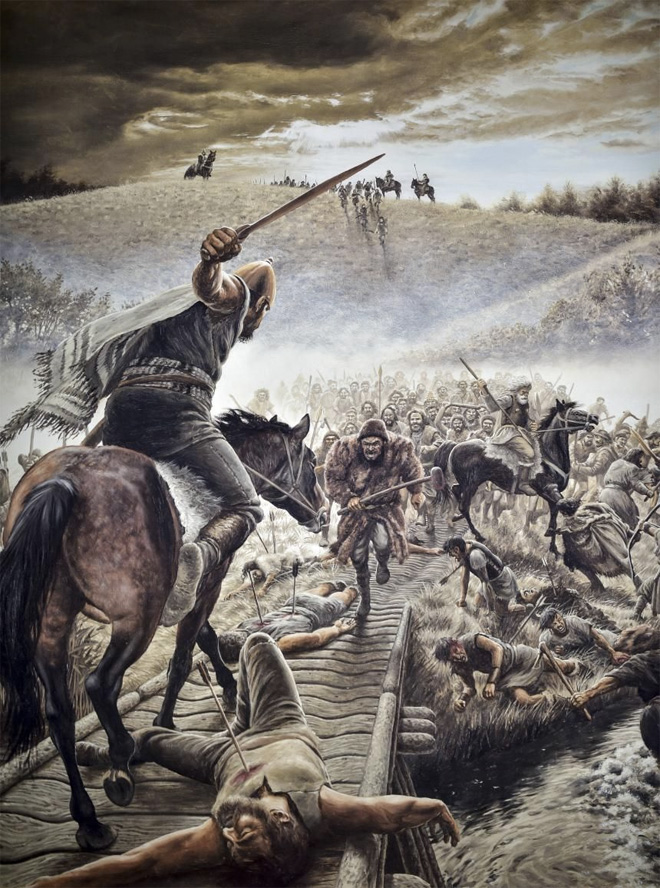 In watchmaking as in the domestication of the horse, the practical applications of watch technology and their eventual utility to society follow the following maxim: “necessity is the mother of invention”. Just as it was necessary for the peoples of 1500 BC (the Hittites, Assyrians and Babylonians) to find a tactical advantage over their neighbors, so watchmaking offered to those who possessed clocks, to tame and master the seasons and the hours of the day to their advantage.

First, let us see some disturbing truths, it is true that Louis Moinet is the inventor of the modern chronograph as we conceive it – with his two pushers and his counters, the Compteur de Tierces de Moinet actually provides the first glimpse of chronographs today, but Nicolas Rieussec provides more than that – The famous chronograph Rieussec, invented in 1821 at the time of horse racing, was the first practical timekeeping device to the world that did not require the user to look at the elapsed time, but rather, automatically. “Marked” the elapsed time on a disc. 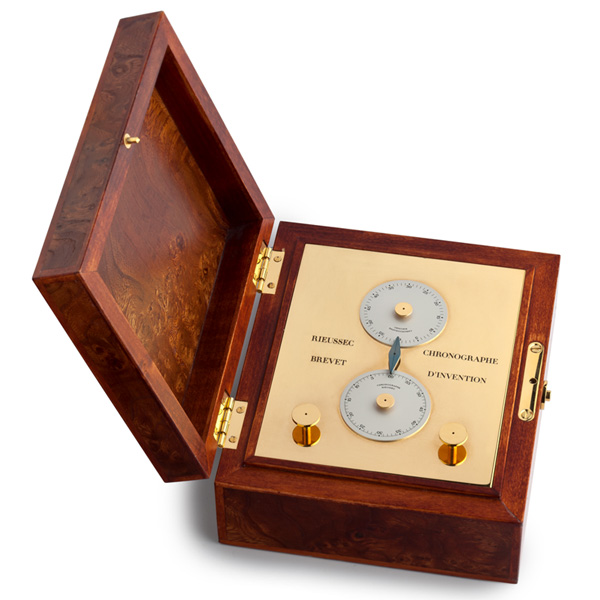 Think about it for a moment. Just as the domesticated horse was essential to the development of human agrarian societies, it is the saddle and the stirrup that have truly enabled the emergence of expansionist civilizations and the ability to deploy calvary units to defend a young man. borders of the empire or make opportunistic incursions to occupy new frontiers. In this respect, Rieussec’s invention of the world’s first time writing device is a modern innovation that was not seen before the first printed tape timing devices used to mark the time elapsed at the 1912 Olympic Games. .

In addition, consider that, within the digital boundaries of the watch, your chronograph does not require you to manually indicate the recorded timing, press a button and mark the elapsed time while continuing to follow the duration. It was also the raison d’être of Nicolas Rieussec’s revolutionary invention: a mechanical chronograph is great for timing a horse or a singular event, but Riessec’s “chronograph inker” was able to create multiple points on disc, allowing guardian to never look up from the action. Using the chronograph as we understand it, the first sports timing efforts required several timekeepers, each with their own chronograph and their own variable speeds for time marking. While we are poetic about it, the “chronograph” of Nicolas Rieussec follows the most true meaning of the term, because his revolutionary apparatus was indeed a “writer of the time”. As in Chronos which means “time” and Graphein which means “to write”. For this, there is no argument in the annals of history. The Moinet Tierces Counter kept track of the elapsed time, similar to our first domestication of the horse, but with Rieussec’s “Chronograph”, aka Chronographein, we had a vision of the future timing with several recordable instances. The chronograph unveiled nearly 100 years before our primitive electronic devices began to mark time in the same way on paper strips. 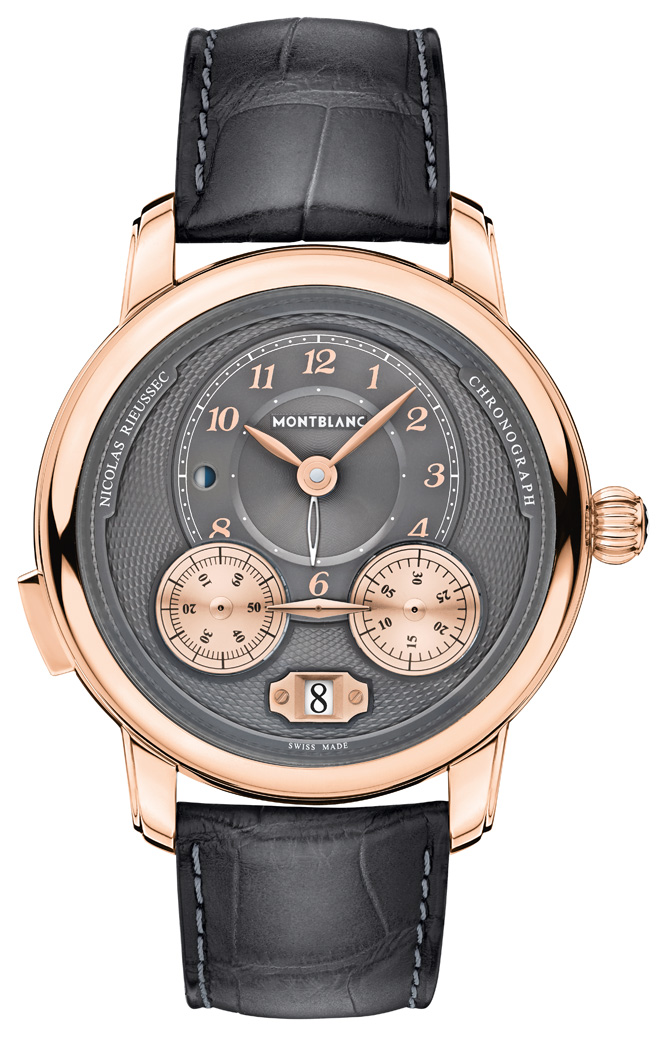 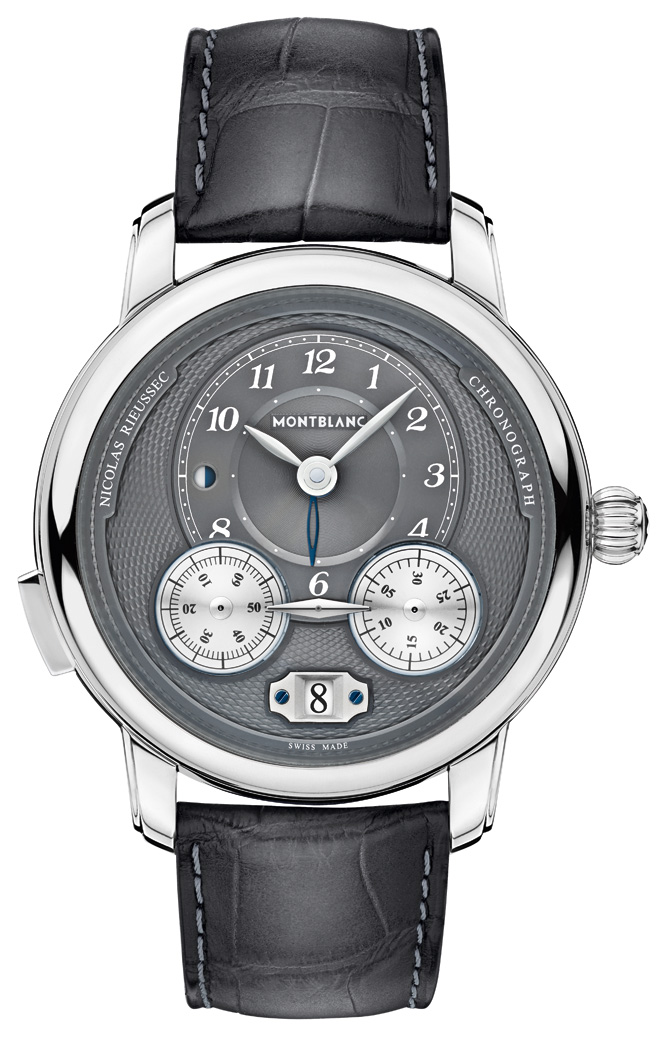 
The heritage of Rieussec

Regarded as a minor when Rieussec began making watches, the young man did not appear in the Paris Trade Almanac for the year XIII of 1805, which would list 190 of his contemporaries, including Abraham Louis Breguet up to # 39 to five years later. Of the 222 watchmakers listed in the Almanac at his time, there were five watchmakers to the king, Rieussec became the sixth, charged with “the maintenance of the clocks of the minister of the king’s house”.

In 1821, Rieussec will finally be recognized for his talents. Do not forget that running the horses and determining the winner with a single “chronograph” (at the time, they called chronometers) was one thing, but being able to measure each other’s time Runners was something else, it was a necessity in the early 19th century that no other instrument could accomplish. 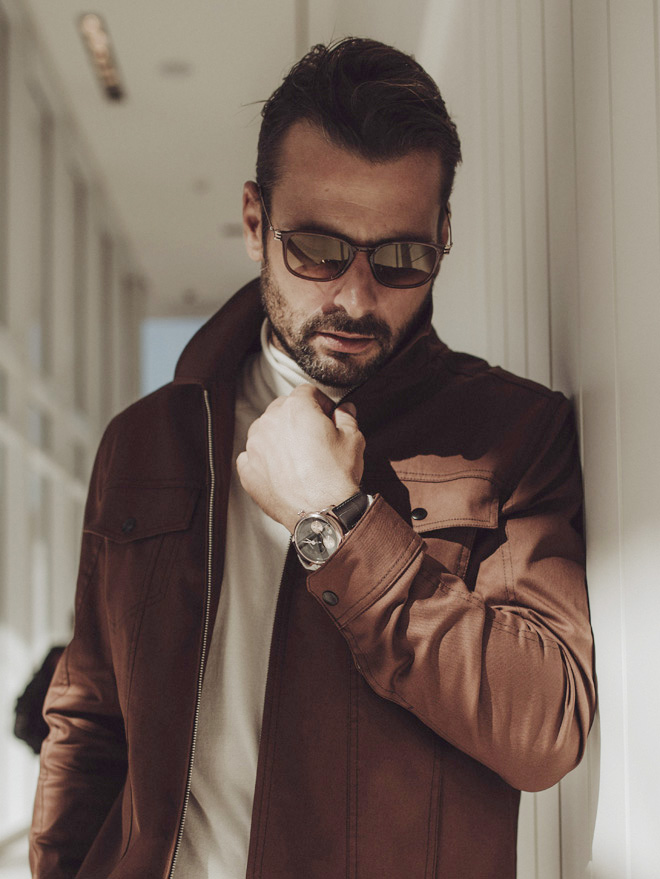 At the Champ-de-Mars, in Paris, observing the race of the Seine Borough as a watchmaker testing a chronometer designed to measure in a coherent way the time required for horses to travel distances prescribed race – not only the winning horse, but also To do this, Rieussec designed a “device” table, housed in a wooden box containing a pair of buttons and two rotary dials: one for seconds, the other for the minutes. Above these “dials,” he stared at his hands full of ink. As the event unfolded, all the timekeeper had to do was press a button as soon as a horse crossed the finish line. The ink-filled tips would then touch the bend dials and leave small ink marks on them. Along with many personalities of the Champ-de-Mars, Joseph Jerome, Count Simeon, Deputy Minister at the Ministry of the Interior; and Gaspard de Chabrol, prefect of the Seine; Rieussec’s invention met a real practical need and the minister quickly identified his invention as a monumental “public utility creation”. This achievement will soon be officially recognized by the French Academy of Sciences. Managed by the legendary Breguet and the chief engineer of the National School of Roads and Bridges, François Marie Marie Riche de Prony, the work of Rieussec was integrated into the Academy.

Its main merit lies in its ability to indicate instantaneously the first and last moments of several successive time intervals by means of permanent visible signs on a moving dial, without requiring the attention of the eyes or ears of the observer . A chronograph with such a property offers unquestionably valuable resources to doctors, engineers and, in general, to all who measure phenomena. – Recognition of the French Academy 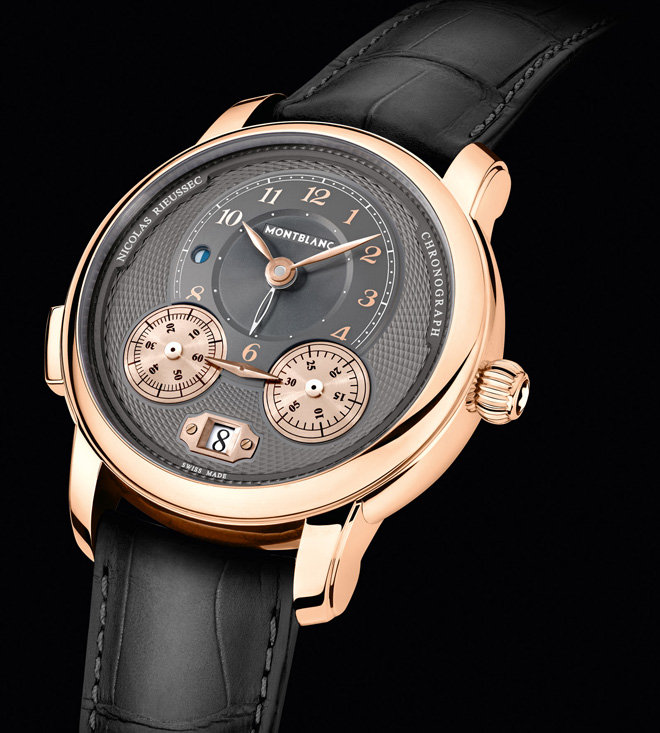 Montblanc first paid tribute to the inventor of the time measuring device, dedicating his innovative Montblanc chronograph Nicolas Rieussec to the ingenious watchmaker, in 2008. Like the original 1821 chronograph the chronograph hands do not rotate above the dials; instead, they remain motionless while the seconds disk and the minutes disk turn under them. Although the design of the Montblanc dial is aesthetically inspired, it seems innovative, even anachronistic, futuristic, beyond the usual pointer-subdial configuration we have become accustomed to.

While Montblanc’s first tribute to Nicolas Rieussec in 2008 was equipped with a manual caliber, the MB R100, the subsequent editions of the Rieussec chronographs equipped with the MB R 110 caliber were automated, the date being moved to 3 o’clock . For 2018, the new Star Legacy, Nicolas Rieussec, perpetuates the legacy of the 60-second and 30-minute signature counters, located under a fixed double index, much like the original desktops . 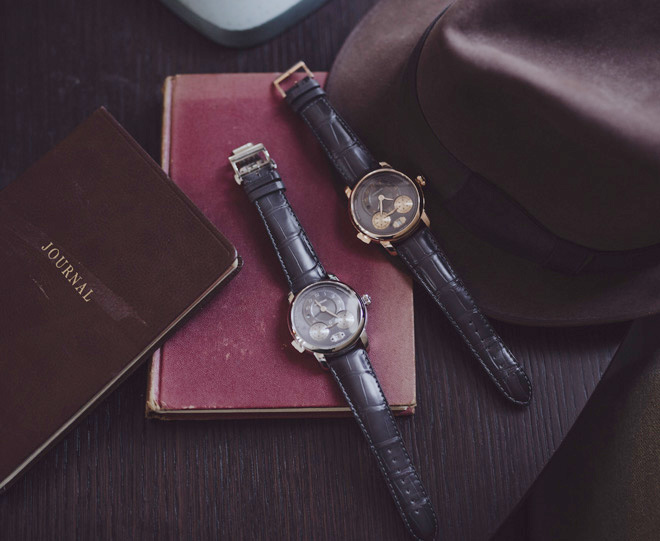 Aside from the rotating elements and the common bridge crossing the dial, most of the technical improvements are in the all-new MB R200 manufacturing caliber. The self-winding mechanical chronograph now features a new special gear train for more efficient power transmission. How effective? The timing performance of Nicolas Rieussec does not disturb the amplitude of the balance, whether the chronograph is running or not. More importantly, as in the original invention, Montblanc strives to ensure maximum practicality, by presenting a quick reset of the time display and a quick indication of the date, ahead or back, unlike most modern timepieces where the date should not be advanced damage the mechanism. The vintage vintage Rieussec Chronographein may have been designed for the era of horse racing, but the latest Star Legacy chronograph Nicolas Rieussac is designed for travelers around the world thanks to its robust time setting and of the date.

Keeping the two counters and the dome-shaped offset ring for visual depth, the main dials frame tiny Arabic numerals with a vintage-looking railroad track, needles in leaf shape, an azure finish in the center of the dial and a net “Guilloche Decor that runs around the dial. 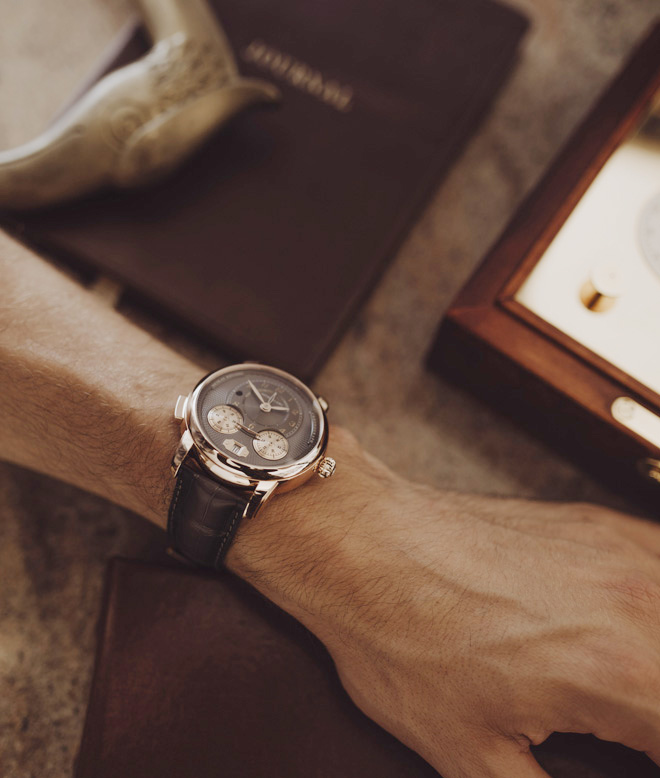 If you want to identify when Montblanc suddenly appeared in the watchmaking landscape, you have gone through two crucial stages: the monopusher chronograph Nicolas Rieussec and the famous affordable perpetual calendar (or famous, according to your interlocutor).