Western Australian yard SilverYachts has launched its largest vessel to date, the 85m luxury explorer-style Bold. She was scheduled for final fitouts and sea trials prior to delivery of the yard’s fifth unique Espen Øino-design, following two 73m and two 77m SilverYachts. 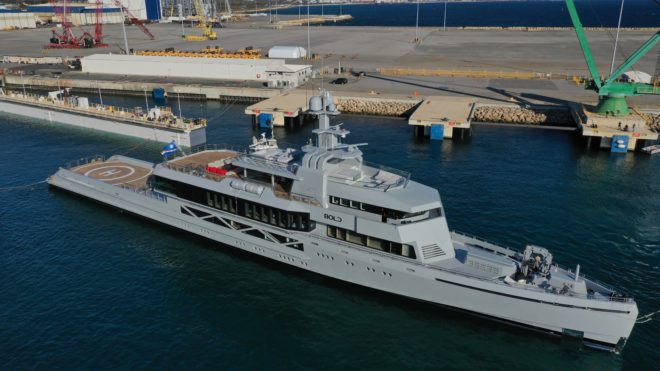 The 85m Bold was launched in Western Australia by SilverYachts

A plan to also build 35.5m Øino-designed SpaceCats at a yard in Jiangmen, in the Pearl River estuary, was announced in Singapore in April.

The next 85m explorer is already under way at SilverYachts’ Australian Marine Complex facilities south of Perth, an area famous for its aluminium expertise and which has produced Oceanfast superyachts, 84m White Rabbit G from Echo Yachts last year, and many fast ferries and naval craft.

Bold similarly has an aluminium hull and topsides, which combined with Øino’s structural analyses at SSPA in Sweden and with SilverYachts in-house design team, has produced another long yet only 11m beam vessel capable of high speeds and conversely extremely low fuel consumption.

This allows fast repositioning, and her surprisingly shallow 2.7m draft enables access to shallow cruising waters unparalleled in yachts of her size, although to balance, there are four Naiad at-speed and at-rest stabilisers.

One of the most striking exterior styling aspects is an amidships “wintergarden”, a European term first used when exterior decks of earlier SilverYachts were glassed-in to provide more protection.

The large aft deck on Bold, which has a 12-tonne crane with 15m reach, caters for a limousine tender and two others, while the helicopter pad is suitable for an Agusta Westland 109 or similar.

The vessel comes in at only 1,504 tonnes, or 800 tonnes displacement, which is obviously another factor in her astounding performance figures.

Other features include a large eight-guest jacuzzi and private dining area, outdoor nooks with bars and seating, and the owner has a private sundeck and lounge. The latter’s sumptuous suite also includes his and hers bathroom facilities and a separate salon, while there are three VIP suites and four guest cabins, all with ensuites.