Casinos provide an excellent context for story telling and film making. They can be luxurious settings, or mean and moody ones like in Mike Hodges’ Croupier. They make great settings for a heist or two, such as in Ocean’s Eleven, right from the Golden Age of Cinema. One way or another, the movie industry has always had a bit of a thing for casino games.

It shouldn’t be any surprise, then, that over the years there have been quite a few movies released that feature the No. 1 casino game of all time, poker. Whilst some of these movies don’t quite pass muster and have faded into oblivion (does anybody remember Poker Night? Thought not!) There are a handful that are truly great, and as enjoyable for a die hard poker fan as they are for the non-initiated. Let’s take a look…

Long before the World Series of Poker was only a glint in Chris Moneymaker’s eye, Stuey Unger was the most famous poker player in the world. As one of only two players in the history of the tournament to win the Main Event at the WSOP three times (as well as two other WSOP bracelets), Ungar was a veritable superstar, but he sadly burned out before his time.

Vidmer’s docudrama tells Stuey’s life story, from his youth spent in New York as the son of a bookmaker, right the way through to those huge games in Sin City. His main event wins in 1980, 1981, and 1997 all feature, and Michael Imperioli does an outstanding job of portraying the highs and lows of Ungar’s life, before his untimely demise to a heart condition in 1998.

This veritable classic of a poker movie stars the legendary Steve McQueen in the title role as Eric ‘The Kid’ Stoner, and the effervescent Ann-Margret as femme fatale Melba. The Kid has dreams of hitting the poker big time, so he works his way up until he manages to make it to the final table of a major game. Once there, he has to take on the older and more accomplished Lancy ‘The Man’ Howard (Edward G. Robinson) in a massive final hand. But will The Kid win out?

Being set in Depression-era New Orleans means that The Kid’s game of choice is Five Card Stud, which was the earliest method of playing organized poker before Texas Hold ’em became the world’s most popular variant, so this one’s a must-watch for poker history buffs.

This 90s gem has it all: poker, action, comedy, a score by none other than Randy Newman himself, and the finest actors of the era in the form of Mel Gibson, Jodie Foster, and James Garner. It’s daft and lighthearted, and the comedy elements still hold up after repeat viewing, but there’s still plenty of poker content to keep poker fanatics happy.

Set in the American Old West, Bret Maverick (Gibson) needs to find three thousand dollars to enter a high-stakes winner-takes-all poker tournament. With just a few days to get his buy-in, Maverick turns to what he knows: poker and casino gaming. Joining forces with Annabelle Bransford (Foster) and lawman Marshal Zane Cooper, the trio work their way through all sorts of scrapes and tricky situations – to hilarious effect. 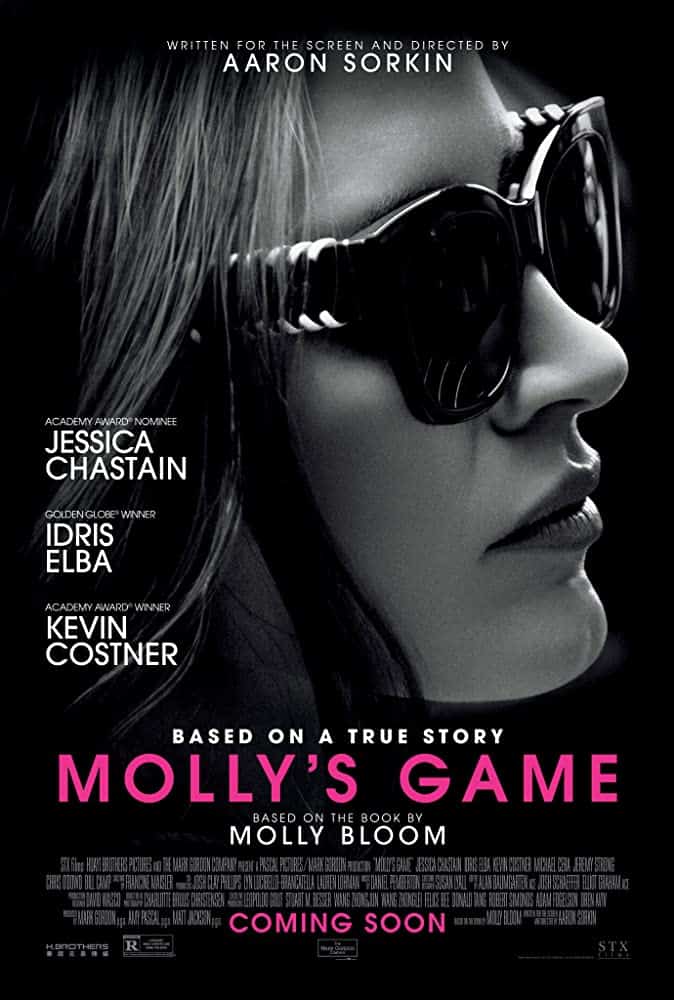 The second ‘based on real life events’ poker movie on this list, Molly’s Game tells the true story of Molly Bloom, adeptly portrayed by Jessica Chastain, the Poker Princess of Hollywood who ran those notorious high stakes games where the players were some of the most powerful, and richest, celebrities and businessmen in the world.

Naturally the movie adaptation has given Bloom’s story the Hollywood treatment, but we’re 100% along for the ride, and invested in Bloom’s metamorphosis from an Olympic class-skier to the queen of poker in LA.

Ask even the most casual poker player what their favorite poker movie is and we guarantee it’ll be this one. Another gem from the 90s with an exceptional cast – Matt Damon, John Malkovich, Edward Norton, Gretchen Mol – Rounders is arguably the first poker movie that properly referenced Texas Hold’em, and portrayed the darker side of pro gaming.

The plot of the movie is fairly simple: Mike McDermott (Damon) is attempting to go pro in Vegas, but loses his bankroll to the nefarious Teddy KGB (Malkovich). Torn between the exhilaration of life at the tables and happiness with his girlfriend Jo (Mol), McDermott finds himself coming to the aid of his friend Worm (Norton), and the duo find themselves in some tense poker showdowns.

Beyond its portrayal of poker which, despite not being quite realistic as far as bet sizes go, does a pretty good job, what makes Rounders such an all-time classic is that it’s willing to tackle themes like friendship, loyalty, and pursuing a dream no matter what the odds.