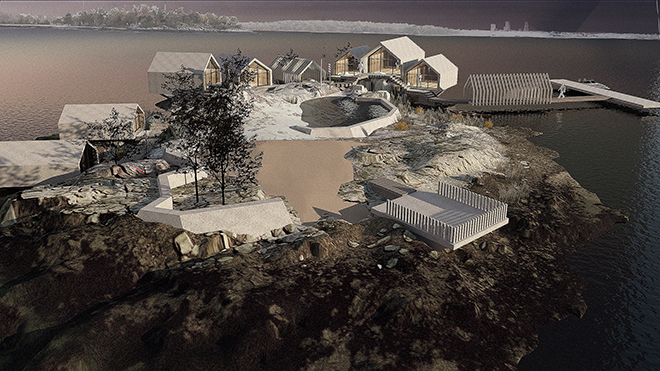 New York-based Jendretzki Design’s proposal of an self-sustaining eco-boutique on the 2.5 acre Rat Island for vexed out city-dwellers. What skeletons in the closet does this cool eco-boutique belies?

At the cradle of Long Island Sound, off the Bronx Borough of the Big Apple, lies Rat Island—an island rumoured to be the haven of prisoners and rattle snakes. Historically speaking, it harboured sickly typhoid patients in the 1800s when scientist were struggling to develop a cure. Obvious to say, many perished on Rat Island. But Pablo Jendretzki’s (namesake founder of New York-based Jendretzki Densign) plans to redevelop the 2.5 acre privately-owned Manhattan schist into a self-sustaining eco-boutique might turn tables and vanquish Rat Island’s notoriety. 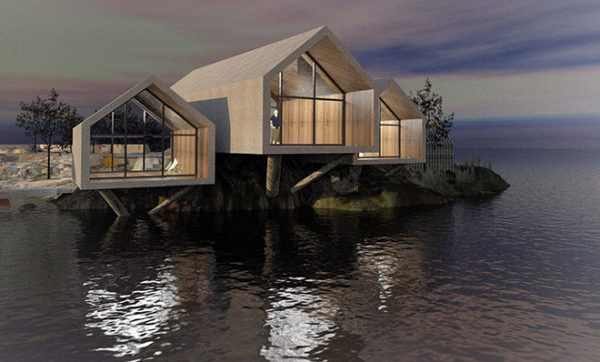 Based on Jendretzki’s renderings, the conceptual ideation showcases a main house and individual gabled cabins with ensuite bathroom, living room and kichenette projecting into the sea, anchored by the rocky terrain. Rather than flattening the land (which possibly makes Jendrertzki’s job easier), the plan is to install the prefabricated pitched-roof cabins on the hard rocky Manhattan schist, propped up by concrete braces and piers. Also, the cabins are envisioned with two full-height windows on each end of its façades to imbue a sense of transparency and the vibrancy proffered by natural light. The result is an organic differential in elevations of the pods that brims with the light of day and dispels the island of the darkness of night.

Apart from its non-intrusive utilitarian design, the self-sustaining model on the isle is especially noteworthy considering its diminutive size—just about that of the Yankee Stadium playing field.  To live up to its vision as an environmentally-friendly oasis, Rat Island will be constructed to be carbon-neutral by harnessing the largesses of nature: sun and wind power. It will even come with a compost treatment plant and a rainwater collection and purification system to supply potable water for consumption. This is about as organic as an island its size can be.

True to its spontaneous, terrain-inspired design language, it will also adapt a natural canal carved into the Manhattan schist bedrock 100 years ago as the dock where small boats may arrive directly under the main building during high tide. At its core, the eco-boutique, which is just 30 minutes away from Central Park, is a city-getaway for vexed city-dwellers to dissipate their anxieties and restore their vitality.

Its geography coupled with the ingenious architectural conceptualisation render the eco-boutique on Rat Island the ideal stress-free paradise. On the island, look beyond the large windows of the gabled cabins into the far horizon as the flowing water around the isle carries your woes through the estuary into the vast Atlantic.