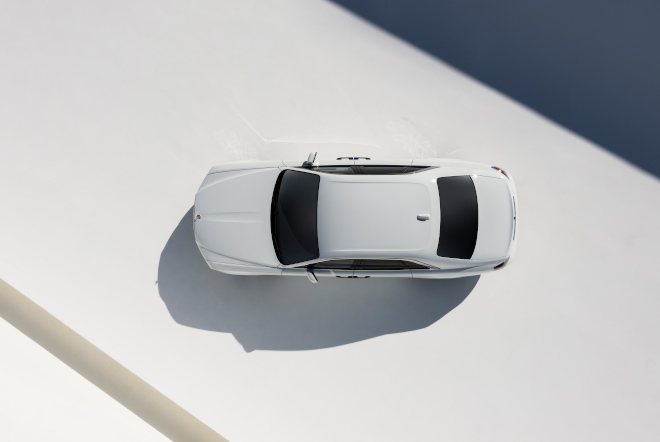 Emblematic of spearheading an era of post-opulence, the first Goodwood Ghost was a response to a whole new generation of clients, both in age and attitude. The Ghost is a slightly smaller, less ostentatious Rolls-Royce with the full flavour and provenance of the legacy and luxury which exemplified the brand for the last 116 years.

The most technologically advanced Rolls-Royce yet, the new Ghost reflects a minimalist philosophy which rejects superficial expressions of wealth, underpinning our last conversation with the brand’s Head of Bespoke Alex Innes, “ With a Rolls-Royce there’s always this sense of etiquette, and a feel for having just the right gesture, at the right moment that it’s perceptive to the situation whether it’s the careful offering of an umbrella from the door, as soon as it starts to rain or it’s indeed the fact that the coach doors open to the rear to ensure that you can access and egress the car in the most elegant fashion. There is this subtle sense of what’s right, these details extend also to people’s perception as well.” 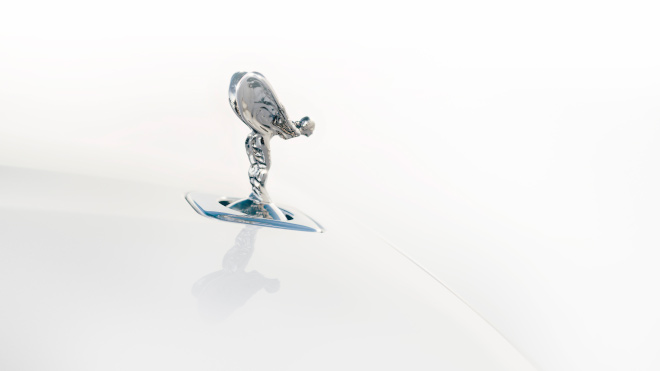 Indeed, as a quintessentially British brand, there’s a civility which permeates every fibre of a Rolls-Royce’s rigid aluminium spaceframe architecture. Over its ten-year lifespan, the Ghost has become the most successful model in the marque’s history for good reason: By listening carefully to their discerning clientele, the Goodwood carmaker inevitably set new benchmarks in customer centricity by creating a completely new motor car. Sublimely engineered, hugely charismatic, the new Ghost pushes technological boundaries which on the surface, appears more the purview of the makers of performance sports cars rather than stately sedans for captains of industry. 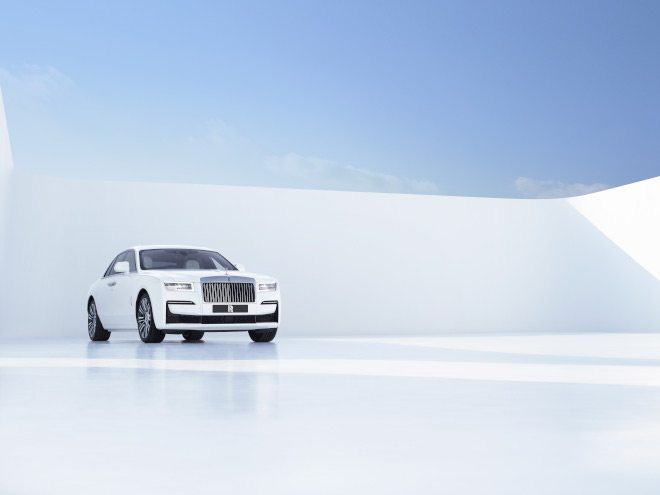 Beneath the surface, significant advances were made with the marque’s proprietary aluminium spaceframe architecture. A revolutionary development first used on Phantom, then Cullinan, this spaceframe is unique to Rolls-Royce and enables the brand’s designers and engineers to develop an authentically super-luxury product, free from the constraints of traditional platforms used to underpin high- volume vehicles. Speaking to Rolls-Royce’s Luxury Intelligence Specialists, highly successful, diverse and globalised entrepreneurs and founders, spoke of their needs for a vehicle that could be as connected and integrated into their lives as their connected technology. They yearned for a drive that could perform the dual role from day-to-day business to a weekend drive: in other words a super-luxury saloon that was simultaneously dynamic, serenely comfortable and perfect in its minimalism. 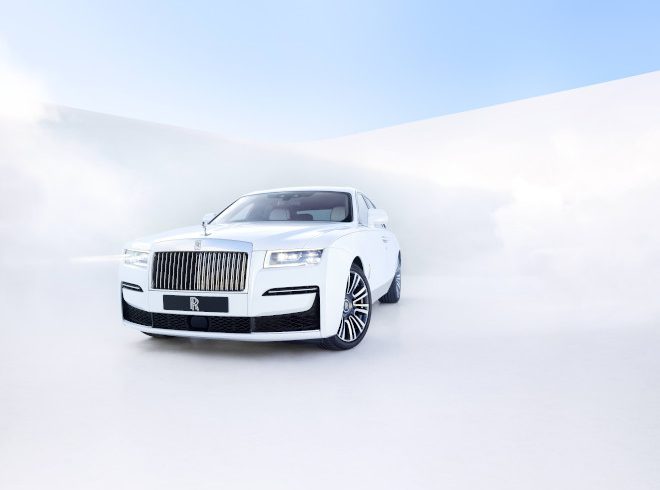 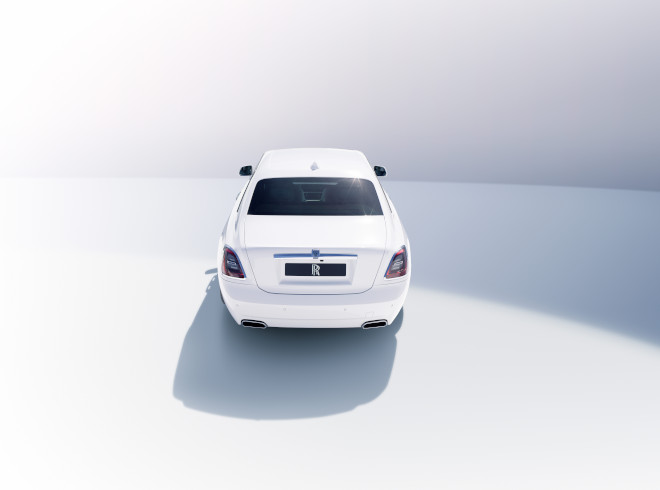 These were profound learnings: As Ghost clients required even more of their motor car, Rolls-Royce incorporated technology such as all-wheel drive and all-wheel steering in Ghost, unlocking an entirely new, purposeful personality that clients soon came to realise that Rolls-Royce could offer more than a chauffeur-driven experience.

Downplaying the parthenon-esque grille of the Phantom sedan and shifting to nimbler proportions, the Ghost enjoys the sensuous curves, departing from the high and crisply formal roof and shoulder lines of its other brethren, opting for for billet-smooth body panels and a tapered silhouette instead. According to Innes, ’Post Opulence’ is characterised by reduction and substance. In service to this, the Rolls-Royce Ghost curates exceptional materials and a simpler yet uncompromising aesthetic where Design is purposefully limited, intelligent and unobtrusive. What results is new Ghost. An automobile so precisely tailored to its clients, that it appears perfect in its simplicity which belies its remarkable substance.

The interior cabin of the Ghost echoes her exterior: a clean, almost uninterrupted dashboard with a generous dose of natural wood panelling and other esoteric (depending on your choice of bespoke material) finishing with a glowing Ghost nameplate on the passenger side using over 150 LED lights and 90,000 laser-etched dots to disperse some gentle, almost mesmerising ambient lighting.

“Bespoke” is not just some buzzword at Goodwood, it applies to the audio system as well. Highly engineered aesthetics incorporate a resonance chamber into the body’s sills, effectively turning the car into a giant sub-woofer. A home away from home, 18 channels to provide 1300W output, channelled through magnesium-ceramic speaker cones where active microphones detect frequency imbalances which the amplifier automatically compensates for, CEO Torsten Müller-Ötvös calls it, “the best way to get through heavy traffic” and we agree.

Presciently and of utmost importance to Rolls-Royce since 2015, Micro-Environment Purification System with ultra-sensitive impurity sensors detect airborne contaminants, protecting clients from harmful carbon and pollen particles, as well as contaminants. One might tolerate the day-to-day reality of traffic James but Covid-19 isn’t really the kind of thing that can be ‘tolerated’. Detecting a threat, the MEPS has a Recirculation Mode  channels all cabin air through a Nanofleece filter capable of removing nearly all ultra-fine particles from the Rolls-Royce’s micro environment in less than two minutes.

It’s very much a driver’s Rolls-Royce. The modular aluminium chassis with its bulkhead, floor, and crossmembers have been repositioned; and augmented by the world’s first Planar suspension system, the Ghost enjoys significantly improved agility and effortlessness. One doesn’t so much as drive a Ghost bur rather pilots it. 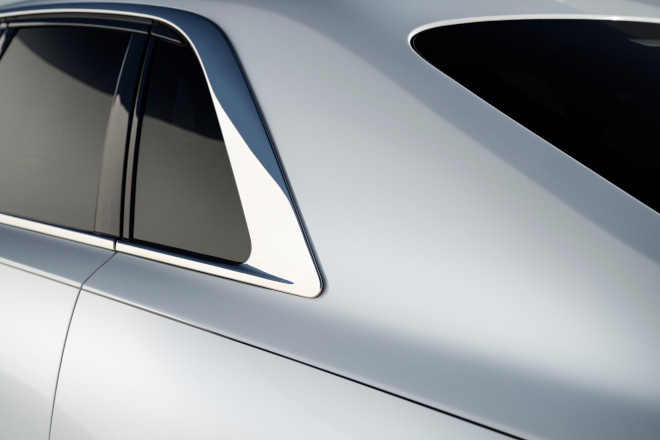 Equipped with the hallmark 6.75-litre twin-turbo V12 engine, delivering 571PS and 850nm, it’s not so much the power and impeccable handling but a holistic concept that Rolls-Royce dubs “Formula for Serenity”. Utilising 100 kilograms of sound-deadening material and know-how, Goodwood’s acoustic engineers identified ‘hidden inputs’ and examined every component to create a ‘near-silent’ soundstage – the trick of soundstaging is that anything would be an annoyance in a zero-sound environment, what the new Ghost demonstrates is a suppressed buzz and a ‘cultured’ but still no less throaty roar when the twin-turbo power plants kicks it up a notch. The new Ghost is perfect in its simplicity, but created with maximum adaptability, a creature in harmony with the needs and multi-hyphenate portfolios of its high achieving owners and perfectly in tune with the times. 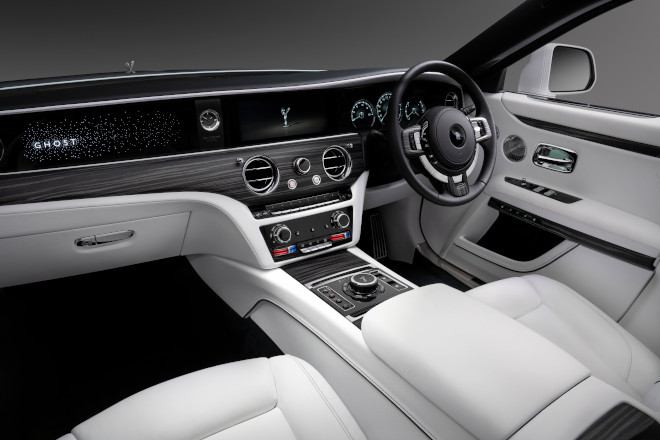