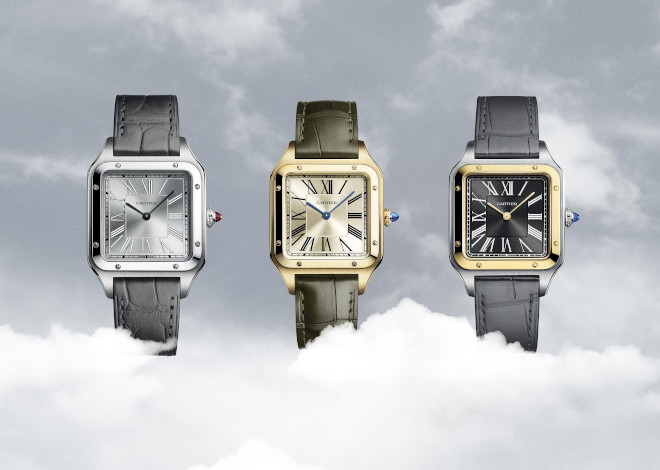 Famously, we know Cartier made Alberto Santos-Dumont a wristwatch in order to keep his hands-free for the instrumentation. Not so famously, few remember the name of his aircraft – La Demoiselle, nor of the man’s irrepressible sense of style, decked out in three piece suit and of course, his signature Panama hat. Also known as an Ecuadorian hat, Santos-Dumont’s choice of headwear was emblematic of his eye for details: handmade, the tightness and finesse of the toquilla straw weave exemplified the care taken, analogous to the precision calculations required for successful flight for La Demoiselle, a series of aircraft built in France by the Brazilian aviation pioneer. 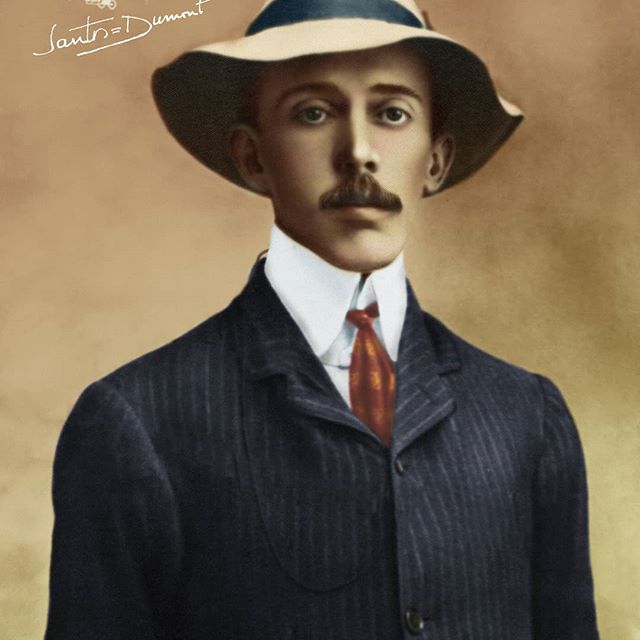 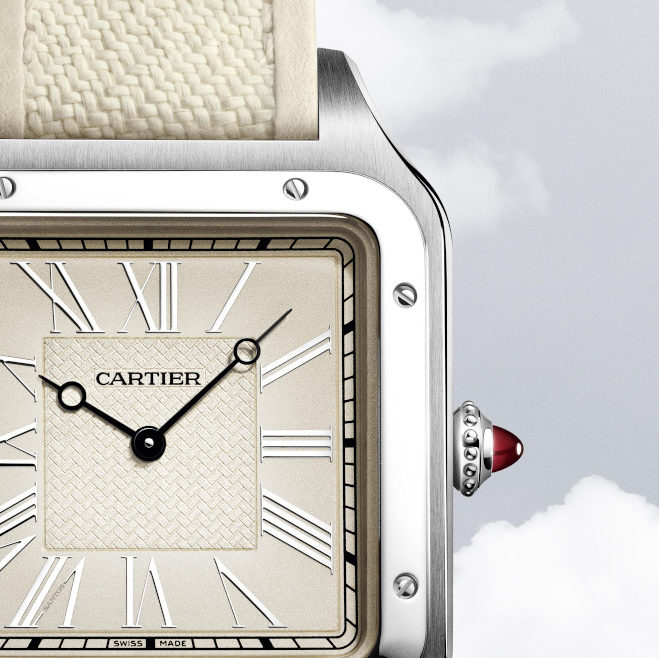 The new Cartier Santos-Dumont La Demoiselle pays homage not just to Alberto’s technical excellence but also his stylistic finesse. For the first time since Cartier made his pioneering pilot’s watch, the new Santos-Dumont La Demoiselle returns to the original styling of the world’s first wristwatch for men, complete with Breguet hands reminiscent of the original. However, rather than simply (and cynically) remake the world’s first pilot’s watch, Cartier has elected, much in the same way Jaeger-LeCoultre has, to re-introduce the world to a modern classic. 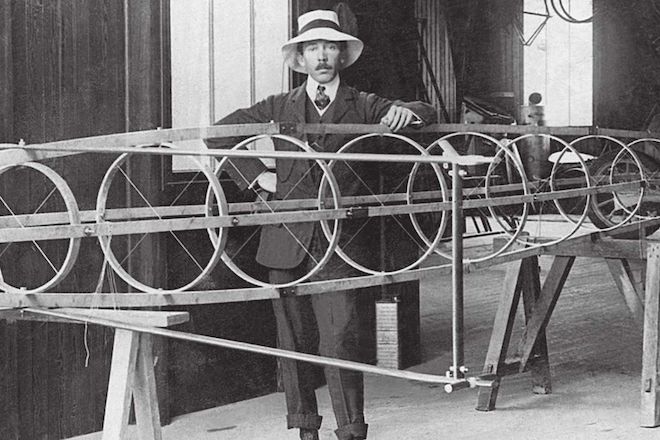 Like Jaeger-LeCoultre’s new Master Control Chronograph Calendar, the 2020 Cartier Santos-Dumont “La Demoiselle” is a contemporary interpretation for something originally designed over 100 years ago. All the vintage elements which made the original Santos-Dumont a watchmaking icon are there, plus a few new ones which ground Cartier’s new Santos-Dumont La Demoiselle as a thoroughly modern timepiece rather than a mere re-issue.

Limited to only 30 pieces, the platinum Santos-Dumont La Demoiselle is Cartier 2020’s most precious novelty and the definitive pinnacle of the Santos-Dumont collection. What sets it apart from the other new 2020 Santos-Dumont XL watches are the “inverse” aesthetics – instead of black Roman numerals we get silvered Roman numbers, instead of the typical blued sword hands, we get black Breguet hands (I don’t think they are mirror noir finished but literally black), and as denoting this new  Cartier Santos-Dumont La Demoiselle’s “secret” Cartier signature in the “VII” has been replaced by “Santos. The platinum caseback with laser engraved line-drawing of the La Demoiselle is refined but if you know that there’s an beautifully finished manual winding calibre 430MC under there, it’s bound to evoke some questions in your mind as to the wisdom of this decision. That said, the illustrated caseback keeps the latest Santos-Dumont La Demoiselle firmly in the family together with Cartier’s other 2020 novelties. 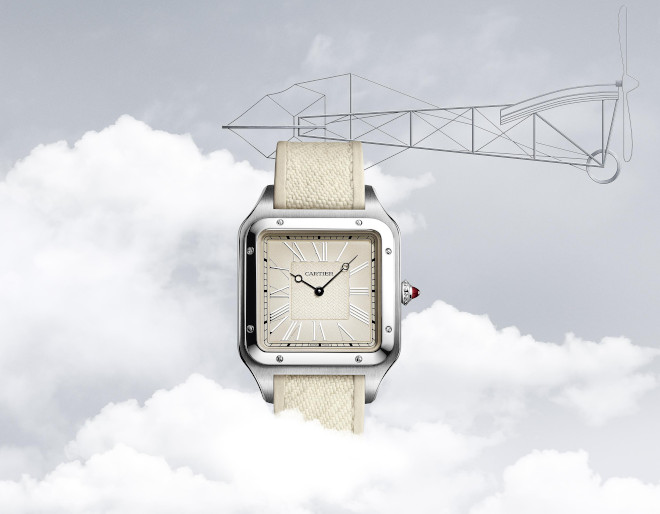 In place of its typical signature sapphire cabochon is a crown topped with a ruby cabochon instead and it pairs really well with the ecru colourway that Cartier has chosen for its latest Santos-Dumont XL. I’m in two minds about it – I mean Louis Cartier made the first model, but perhaps the maison felt “Santos” would have more resonance for their limited edition 2020 Cartier novelty. The platinum case pairs really well with the muted ecru monotone as well, making the latest Cartier Santos-Dumont La Demoiselle the epitome of classic elegance. 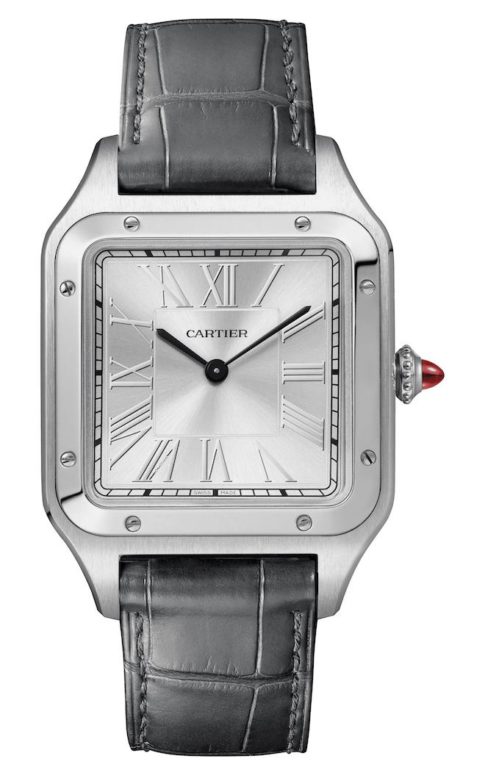 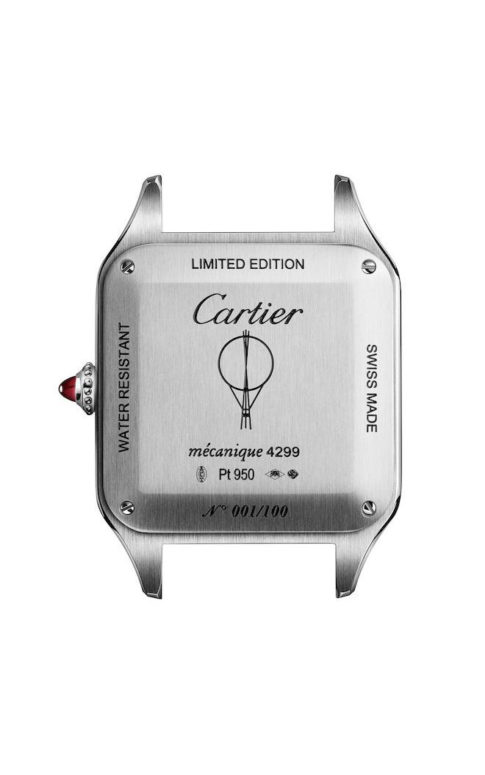 Accompanying the Santos-Dumont La Demoiselle are three other limited edition models with the Brazilian aviator’s other aircraft: The “Le Brésil” Santos-Dumont, named for the gentleman pilot’s very first machine, “Le Brésil”, created in 1898 – “the smallest” and “the most beautiful”, according to the aviator. Its unveiling took place on 4 July 1898, after which a series of airships numbered 1 to 22 would emerge between 1898 and 1909, representing his many attempts to defy the laws of weightlessness. A limited edition 2020 Cartier Santos-Dumont of just 100 exemplars. 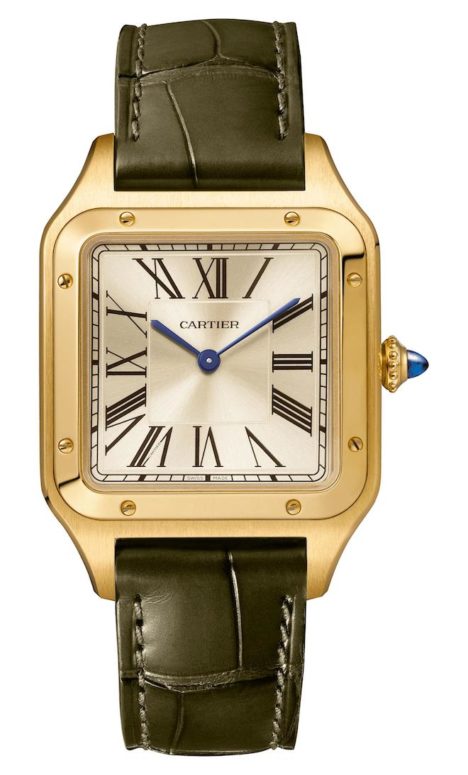 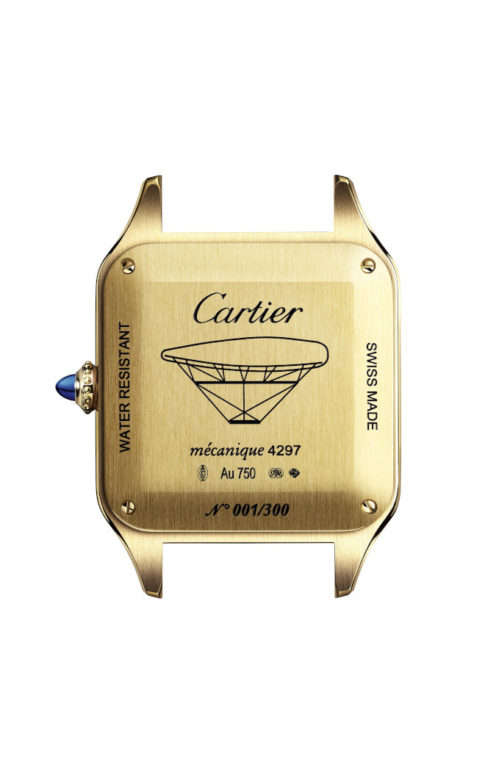 A limited edition of 300 pieces, “La Baladeuse” is so named for the “n°9”, an experimental-looking motorised airship in which Santos-Dumont crossed the French capital’s sky in 1903. A small, bulging single-seater, “La Baladeuse” was intended for the personal use of its creator, who wished to demonstrate its usefulness in urban spaces, a vision which the advent of drone flight has seen fruition over a 100 years later. 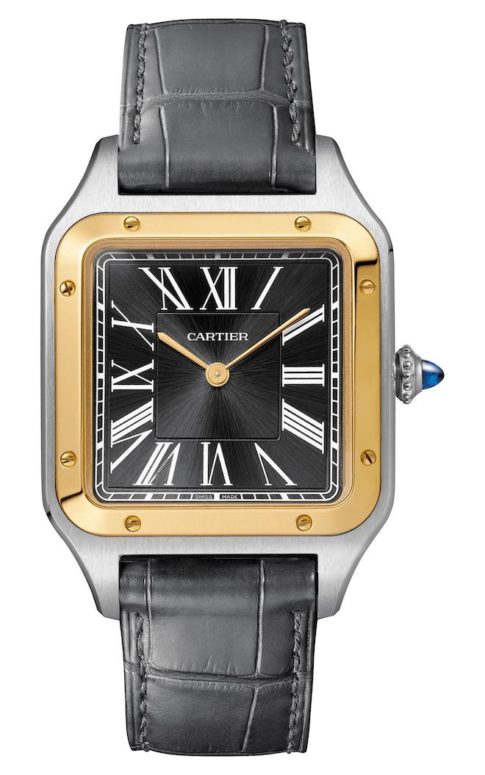 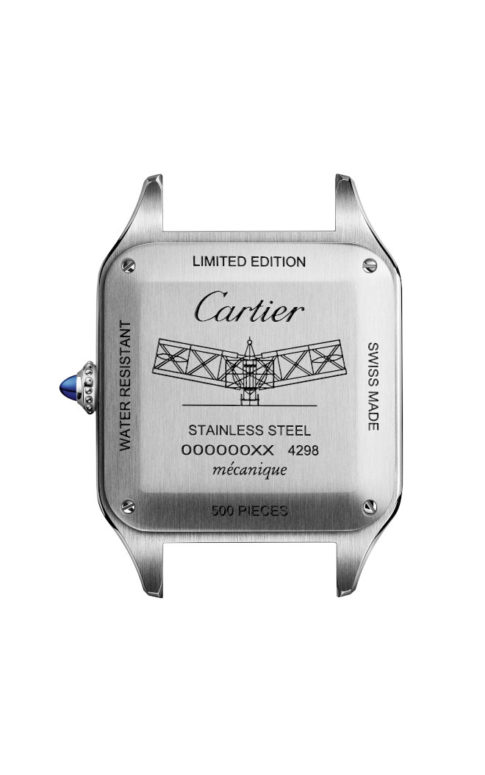 A 500 piece production model of the latest Carter Santos-Dumont watch inspired by the “n°14 bis” flying machine, often described as a ‘kite of compartments’ because the pilot was nestled among compartments  like the fuselage, and was connected to the rudder and fins by cables. On 23 October 1906, the “n°14 bis” won the Archdeacon Cup. Then, on 12 November, it took the Aéro-Club award, making Alberto Santos-Dumont the first aviator to complete a flight of 220 metres verified by an official organisation. 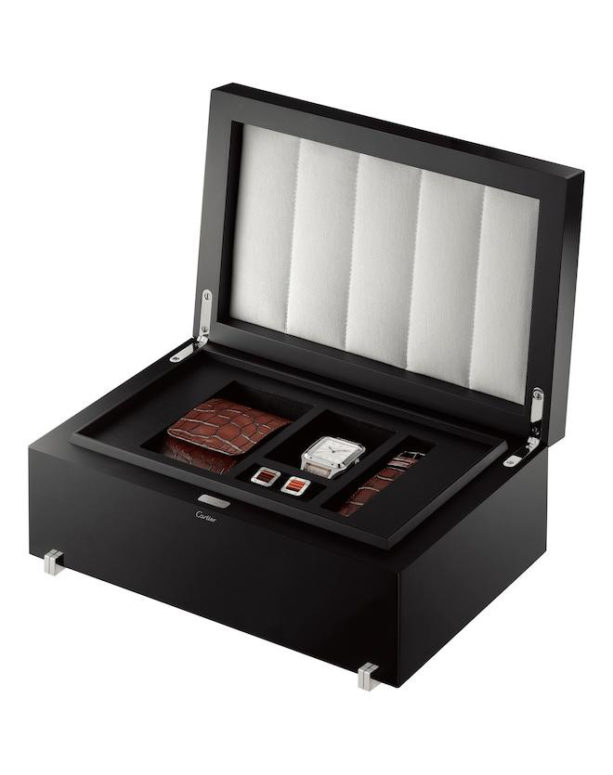 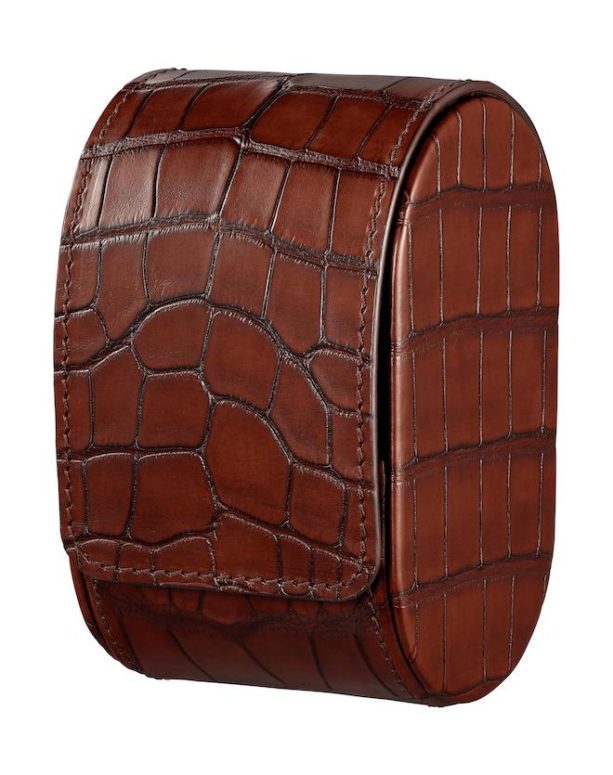