Through combat, Bruce Lee learned that improvements to strength and endurance would make him a more effective martial artist. The MR-G series, widely considered to be the most expensive standard issue G-Shock watches available is an analogous extension of Lee’s holistic philosophy – designed with principles of robust functional practicality. Hence, it is a little surprising it has taken Casio this long to finally develop a Bruce Lee Limited Edition for G-Shock’s luxury collection, especially when you consider the synonymous values shared between Hollywood’s martial arts legend and arguably one of the most practically innovative watch brands from the land of Bushido warrior code. The high end series of Casio’s famed G-Shock collection introduces the MRG-G2000BL-9A, the BL suffix representing 小龍’s anglicised initials, debuting on his 80th birthday this year. In terms of aesthetics, the special edition MR-G is similar to the G-Shock MT-G albeit with upscale materials and features like solar charging, bluetooth syncing and that recognisable analog display with four subdials, sapphire crystal with anti-glare coating, and the requisite shock and 200 meter water resistance. Commemorating the 80th birthday of the late late action star, very much beloved and revered till this day, the special Bruce Lee edition G-Shock enjoys a black and yellow colour palette inspired by Lee’s iconic track suit from 1978’s Game of Death – an uncompleted Bruce Lee film where he portrays Hai Tien (海天), a retired champion martial artist who is forced by Korean underworld gangs who hold his sister hostage to retrieve a mysterious artefact. Almost scripted like a movie version of a video game, the Little Dragon aka 小龍’s martial arts prowess is on full display as he battle five levels of baddies, each time, facing a more challenging opponent before he can progress to the next level.

Although the pagoda was supposed to have five floors, three scenes representing three levels were only ever completed but the film was meant to showcase Lee’s principles of martial arts, revealing unique flaws in each opponent’s fighting style. Cinematic toughness meets emblematic toughness as the top line G-Shock MR-G Bruce Lee applies its unique blend of endurance and good looks –  diamond-like carbon (DLC) coating on the entire case and watch face, offset with yellow and red highlights, which are representative colours of Jeet Kune Do, Lee’s adaptive martial art form with foundational base of Wing Chun, which he famously learned under Ip Man.

The bezel is engraved with 12 Chinese characters professing the fundamental teachings of Jeet Kune Do and the caseback bears Lee’s warrior maxim: “Using no way as way. Having no limitation as limitation.” At three o’clock on the face is Bruce Lee’s signature, 龍 the Chinese character for dragon, his namesake. 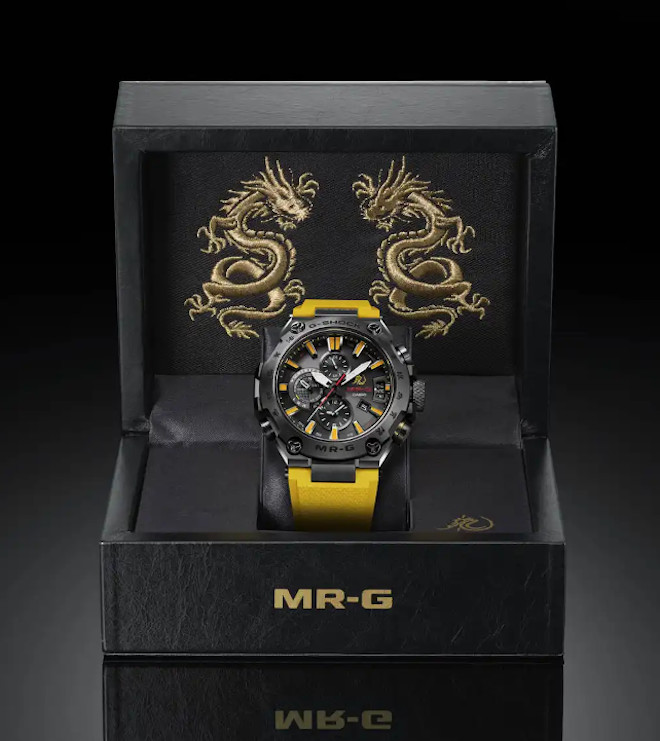 The special Bruce Lee G-Shock is also decorated with embroidered dragon images, and only 300 of these watches will be sold worldwide. Bruce Lee x G-SHOCK MRGG2000BL-9A Price: US$4000, Expected April 2020 Release