Roughly 10 years ago, we saw casual womenswear have its ‘80s moment. Admiration for the decade that brought us skinny jeans, leggings, ra-ra skirts, and cold-shoulder silhouettes still hasn’t let up, and pieces that seemed like fun novelties – who doesn’t like dressing up and pretending they’re Madonna? – have earned the status of wardrobe staples. For men, though, the late aughts weren’t really the time for an ‘80s revival. Now, though, after a decade of dabbling with pinks, patterns, and feminine-seeming fabrics, it seems appropriate to revisit the pop culture period that brought us Miami Vice, Prince, and John Hughes movies.

Stranger Things, recently off its third season, has accelerated that a bit. Although plenty of menswear articles out there touch on the Netflix show’s style, its relatively mundane setting – mid decade, small-town Indiana without a hint of MTV-esque polish – highlights just how much everyday men’s styles have evolved. How many of us can remember when our shorts hit mid-thigh, double denim wasn’t considered a huge fashion faux pas, and high-waist, tapered jeans didn’t come with “dad” connotations? Stripped away from high-budget music videos and rose-coloured memories, the era’s fashion choices look and feel terribly awkward – to the point they’re malleable inspiration for runway presentations. Beyond just the expected Stranger Things-as-style-inspo recap, here are some of the thinly veiled ‘80s menswear trends we’ve spotted: 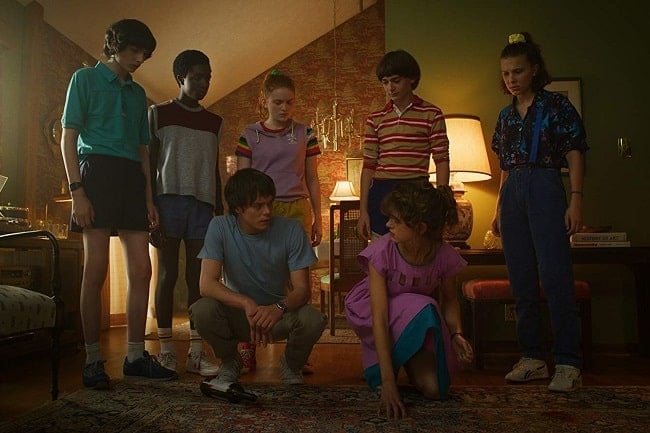 Most would argue this isn’t quite an ‘80s-specific trend, but we’d have to disagree: Double denim, by decade, is all in how you wear it. In recent years, the trend meant pairing slimmer, perhaps darker-washed jeans with a light chambray shirt or trucker jacket. Contrasts matter; otherwise, you end up with a Canadian tuxedo that, at best, alludes to Justin Timberlake and Britney Spears’ infamous American Music Awards getup. At worst, your ensemble is read as redneck from head-to-toe. Somewhere outside this dichotomy, Stranger Things’ Billy Hargrove exists, with his matching denim jacket and jeans and blue Camaro. Nearly everything about the character comes off as off-putting and unsettling, but – and this is more toward actor Dacre Montgomery’s credit – he manages to look good doing it. Amongst this nebula of extremes, the denim two-piece – or co-ord in some cases – presents a fairly neutral version of this trend. A slimmer, hip-hitting denim jacket and tapered jeans match with a single colour, wash, pattern, or degree of distressing. At this point, just find a plain white T-shirt, and you’re all set. 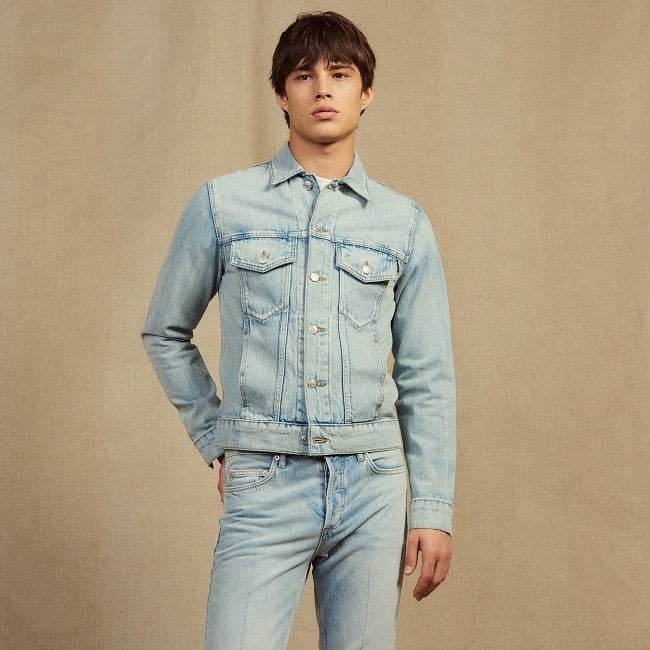 Whether you’ve got Magnum P.I., Miami Vice, Scarface, or Weekend at Bernie’s on the brain, the ‘80s was the last great decade for the Hawaiian shirt – specifically, a silk or rayon garment with a loud tropical all-over print. Pop culture wise, it’s a strange juxtaposition – a default tough guy, in many cases, sporting a flowy feminine fabric with a namby-pamby ‘70s tourist print. Everything about it should look and feel wrong – but there’s just something so freeing about it. Today, though, the trend’s less louche-y and more relaxation heavy. However, because these aren’t your parents’ cruise digs, look for a boxy shape with some space – that draped-yet-structured fit is key – and you’ve got your choice of prints. 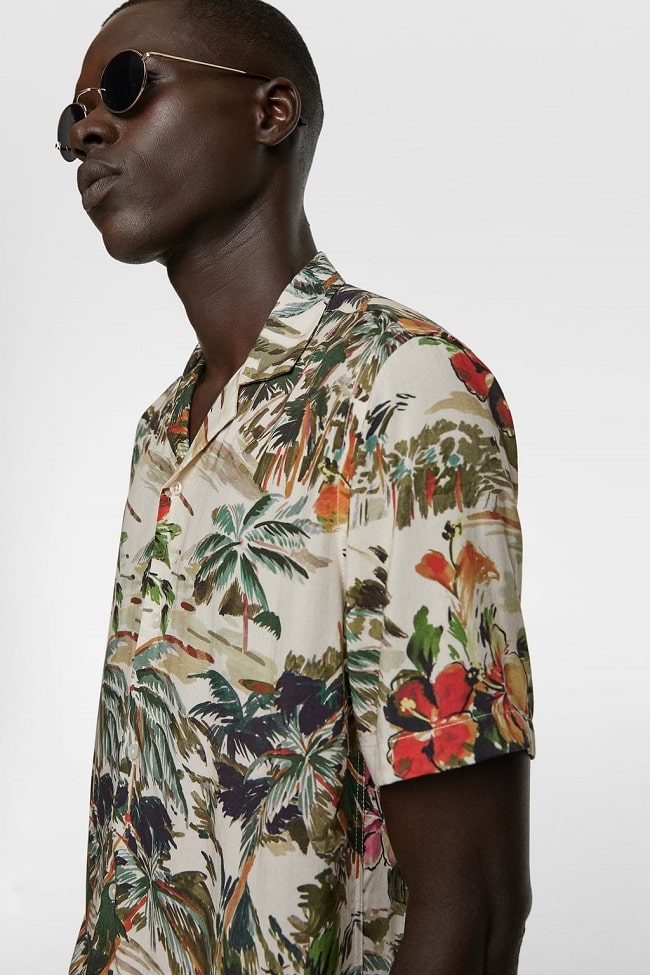 Picture a stock ‘80s prep guy, perhaps out of a catalogue or as a movie antagonist, and by default, he’s got on a pastel-coloured Lacoste polo shirt, complete with a popped collar, light-coloured chinos, and penny loafers. His douchey getup is only bested by his tan, perfectly coiffed blond ‘do, and pearly whites. Although pop culture has moved past this dude and all he stands for, the polo shirt is still kicking around – albeit in a different form. Not just for country clubs and, more recently, golf-loving corporate types, this staple business-casual garment has taken a sportier turn. Slimmer fits complement more performance-oriented fabrics, and colour-blocked, patterned combinations put its style on par with the button-fronts in your wardrobe. 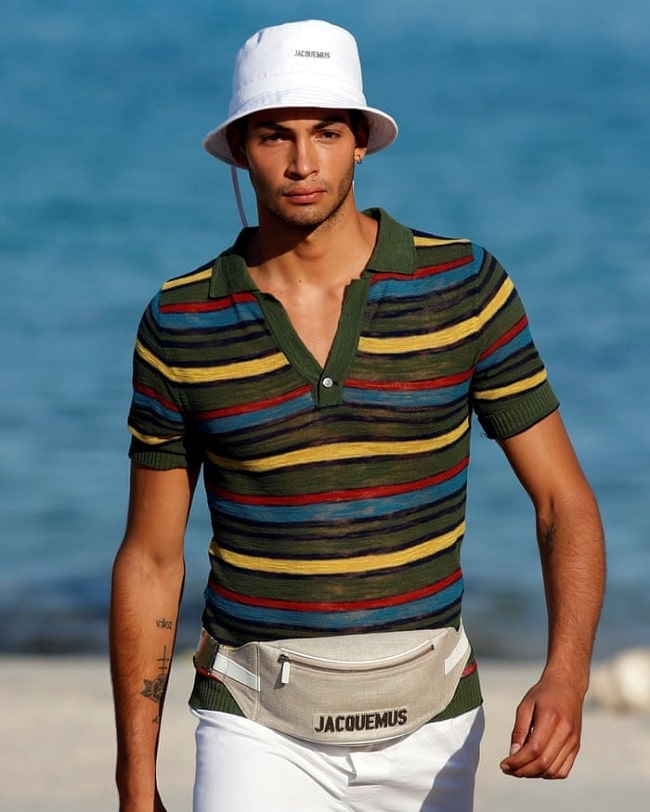 They were a TV and movie staple that conveyed suave, put-together style, but still had an inherent sense of casualness. These weren’t your stuffy prom tuxes or Wall Street two-pieces. Pick a source – American Gigolo is often considered the catalyst, but you’ll spot Blane in Pretty in Pink, the cast of Miami Vice, and, heck, even Corey Feldman in Dream a Little Dream wearing one. In all cases, the shoulders have a bit more space, the trousers – occasionally pleated – fall past the ankles, and frequently, just a T-shirt is underneath. Linen blends and pastels enhance the chilled-out attitude. Today, based on the crop of SS19 presentations, not much has changed. It’s perhaps one of the trends you can directly lift from the era and say, “That’ll work in 2019.” The only change? Beyond a preponderance of double-breasted jackets this year, trainers over laced-up boots complete your look and give you more everyday mileage. 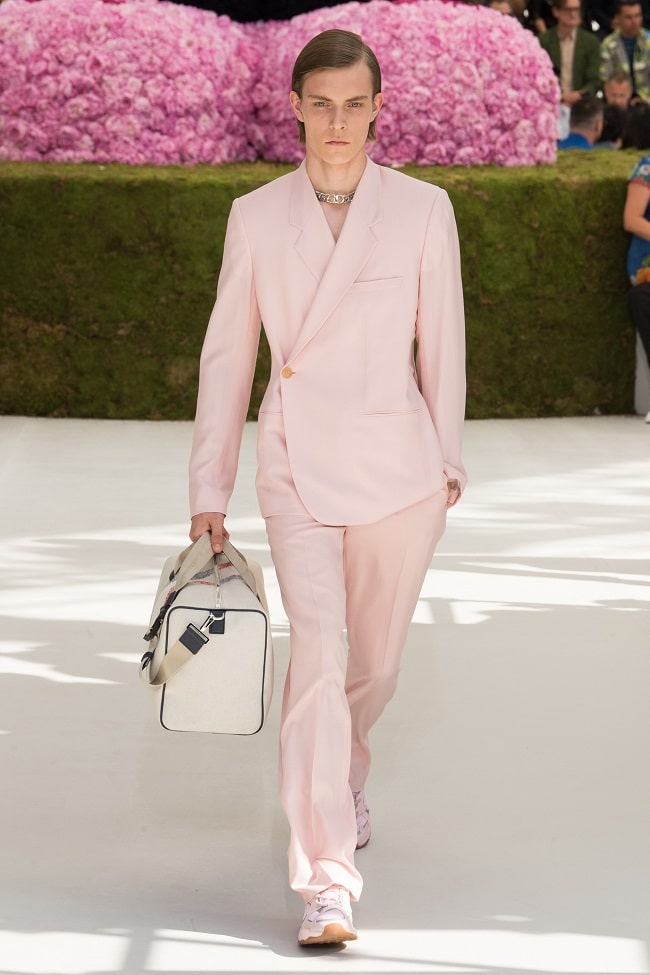 It’s all so techy nowadays. But, there’s good reason for stretchy, polyester-based fabrics, moisture-wicking properties, and mesh panels for air circulation. The styles that accompanied the ‘80s’ fitness craze, frankly, weren’t that comfortable and, in hindsight, work better as relaxed, everyday lounge garments. See the then-burgeoning hip-hop scene’s appropriation of Adidas and Puma for evidence. On the other hand, these pieces had substance and rarely felt flimsy – Champion sweatshirts through your track pants and chunky, leather-constructed running shoes. They’ll help you work up a sweat – something we all try to avoid these days – but are there for comfort when you’re cooling down. Through a modern lens, go retro: Heathered crew sweatshirts, colour-blocked shell suits, and track jackets with matching trousers. It’s all there to be re-explored through a nostalgic perspective. 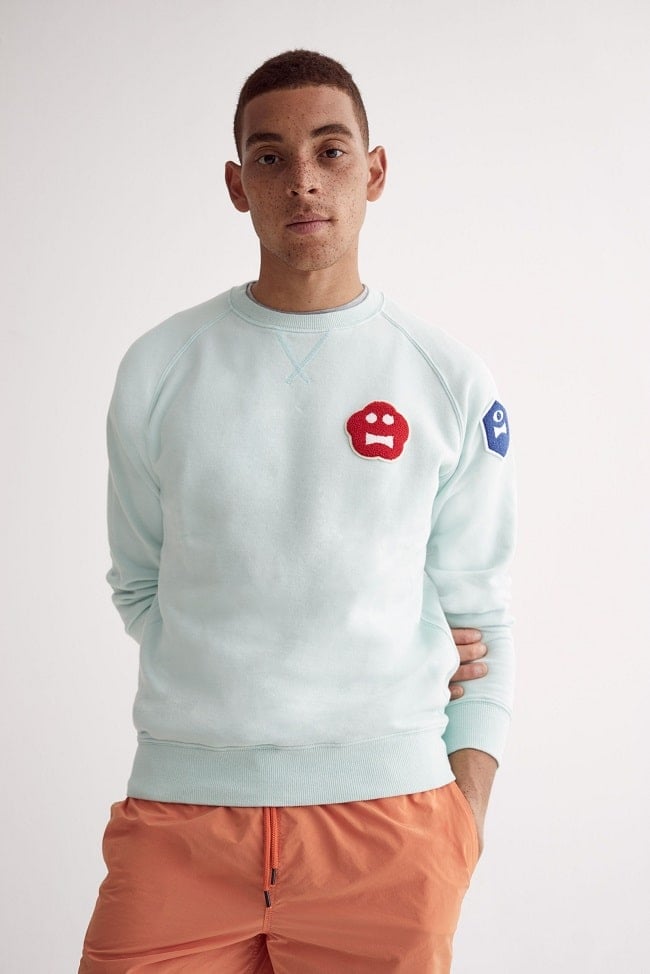 Not the kind that sit right up at the tops of your thighs. Rather, they fall in between your hips and knees and have a slimmer, close-to-the-skin fit. This past season on Stranger Things, its preteen heroes – namely, Will Byers and Mike Wheeler – sported them nonchalantly throughout, and nearly two years ago, Call Me By Your Name reintroduced the idea that shorts don’t always have to hit right above the knees. In a post basketball shorts world, they feel like an odd anachronism, associated with a particular point in time. That looking-into-the-past factor likely inspired Cottweiler, Missoni, Fendi, and Prada, who’ve all dabbled with this silhouette in recent seasons, keeping the fit but playing around with materials and prints. Everyday wise, we’ve yet to see it catch on, but perhaps, Stranger Things adds that extra nudge. 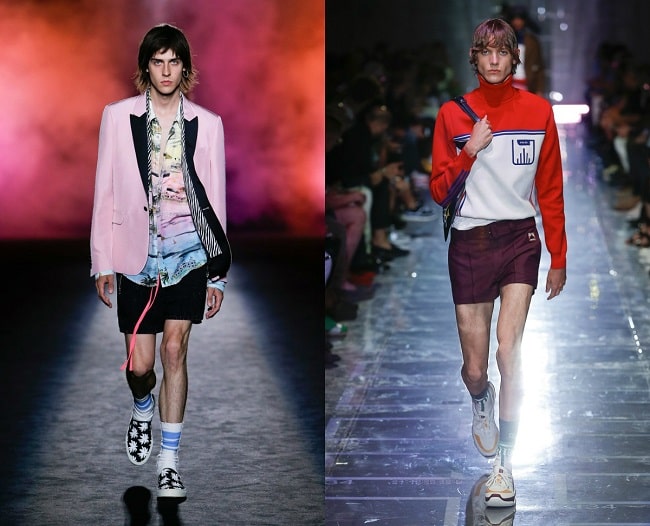