Maybelline Knockout MasterChrome Metallic Highlighter ($9.99 for 0.24 oz.) is a cooler, medium-pink base with a strong dose of gold shimmer. The effect of the warmer shimmer against the cooler base color made it appear like a two-in-one product when applied, as if I had applied a blush and then added highlighter on top. It was intensely pigmented where a little went a long way, and I’d recommend using a lighter hand to pick up product as the powder was soft enough that over-application could be a concern. The consistency was soft, almost cream-like when applied to my skin, and blended out with ease without emphasizing my skin’s natural texture. It stayed on well for eight and a half hours on me before fading noticeably.

This restocked a week or so ago, but it appears to be gone again–not sure if it’ll be restocked again or if you might have luck finding it in stores. I wish we saw shades like this more often, though–it’s harder to dupe because of the more distinctive, cooler-toned base.

It’s supposed to have a “chrome effect” that can be applied “lightly for a subtle glow” or built up for a “bold melted metal look.” The texture was soft, smooth, and blendable that was delightfully creamy to the touch, but it was still more loosely pressed (without being powdery), which made it particularly easy to apply with a slew of brushes. For subtle coverage, I’d recommend a light hand and a tapered highlighting brush or a fan brush with a moderate hand. It had opaque coverage–not buildable as described, which was really the only downside to the product–that applied evenly to bare skin and blended out with little effort. The shades typically wore for around eight hours on me. 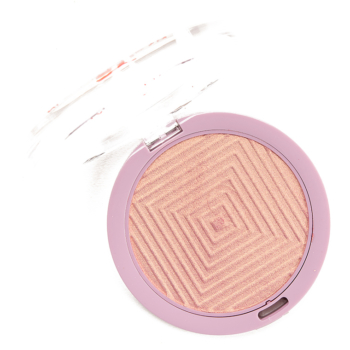