Firmer eyeshadow formulas are pressed more firmly into the pan, and it doesn’t necessarily have to be a bad thing, but firmer eyeshadows require some modification of techniques and tools in order to get the most pigmentation and blendability out of them.

One upside is that firmer formulas tend to work best for building up coverage and often don’t suffer from fallout.

Use a heavier hand because the surface of the pan is stiffer and firmer, so there’s little fear of picking up too much product on a brush, and depending on just how firm or stiff the formula is, it may range from moderate pressure to heavy pressure.

Push and lightly jab at the pan with the edge of a brush when you want to get more pigment.  I prefer a pushing technique over a swirling or sweeping technique when picking up my powder eyeshadows in general (but I’m all about that ~pigment~), where I a flat, shader brush (like a MAC 239) and use the tip of the brush and gently push the pan a few times to dislodge product, and then I pick it up with more of the brush’s surface area so that I can pat it onto the lid.

Use a firmer touch when blending out the eyeshadow.  You’ll likely want to use more circular motions or more pulling along the edge, which will move the pigment a little more than more gentle, sweeping motions.  Sometimes I find that using my shader brush (like the MAC 239) and that edge is more effective than a softer, tapered crease brush (like Hakuhodo J142) because it does a better job of pulling the pigment up and out.

Use flatter, denser brushes with creamier and more silicone-based powder eyeshadow formulas.  These types of brushes are often synthetic eye brushes that are marketed for cream and liquid usage, but they tend to do well with these denser (but creamier, not too stiff) formulas–like heavily shimmered, more metallic eyeshadows.  I find brushes like MAC’s 242 work well, but I’m also a huge fan of Smith’s 253, which is a natural option.

Use a scratchier brush for blending out edges.  This is why the softness of a brush isn’t always the most important feature!  Sometimes, you’ll want a slightly scratchier, rougher brush (this is not to say it should be painful or irritating; e.g. squirrel hair is far softer than goat but goat is still soft yet blends more efficiently), which will move the eyeshadow more efficiently.   The longer spent blending, the higher risk one has of muddying everything in the end. 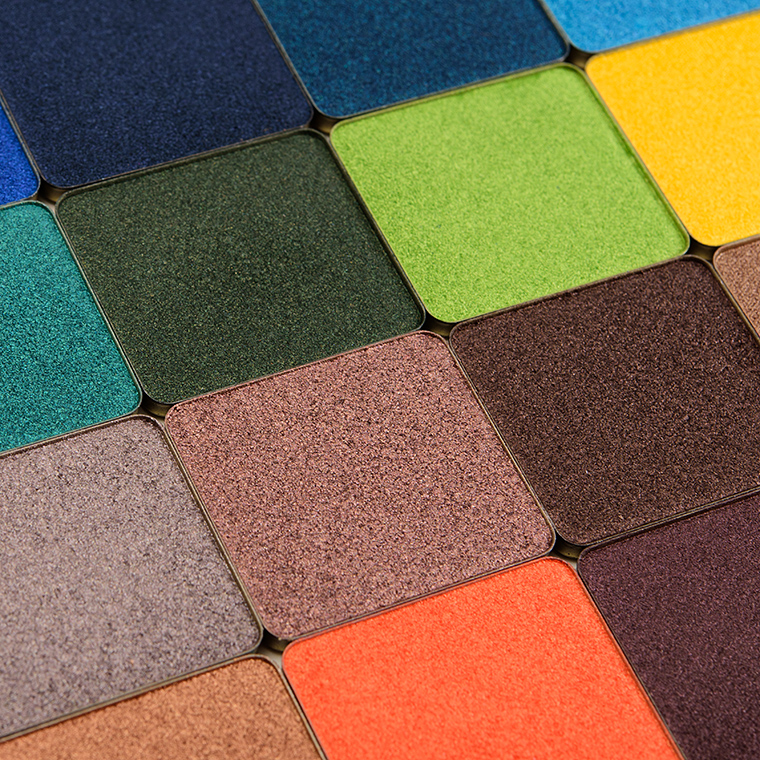 Build up intensity to avoid having a nightmare of a time blending out a stiffer eyeshadow, because often, the firmer and stiffer the eyeshadow, the more strongly it adheres to the lid and less blendable it is.

What I like to do, particularly with richer or darker hues, is to apply in layers, gradually building color intensity so that it is strongest exactly where I want it and I simply don’t layer on as much on areas that I want it to be more diffused or blended.  It ends up looking more blended without actually blending it out as a result.

Use similarly-hued, lighter shade to help blend and diffuse edges.  If all else fails, I’ll take another eyeshadow (hopefully one that’s a bit less stiff!) and layering it just above the harsher edge I want to blend and then pull that lighter shade down and use it to diffuse and soften the edge without lightening the original shade too much.

Be careful using more white-based shades as it can cause some deeper shades (especially when working with matte eyeshadows) to turn gray.

Remove hard pan or film build-up with a paper towel gently rubbed against the surface of the pan; paper towels are often rough enough to disturb the surface more evenly, which will take off the top layer that has developed a film.  This film can make the eyeshadow appear almost oiled and feel much firmer.  This often occurs as a result of the natural oils from your fingertips, face, or eyes transferring to the powder eyeshadow.  If you use fingertips, it is most likely to happen, but it can also happen when using brushes (some formulas are more prone to it than others).

Quote of the Day
Abraham Lincoln
Important principles may, and must, be inflexible.
Ashburn