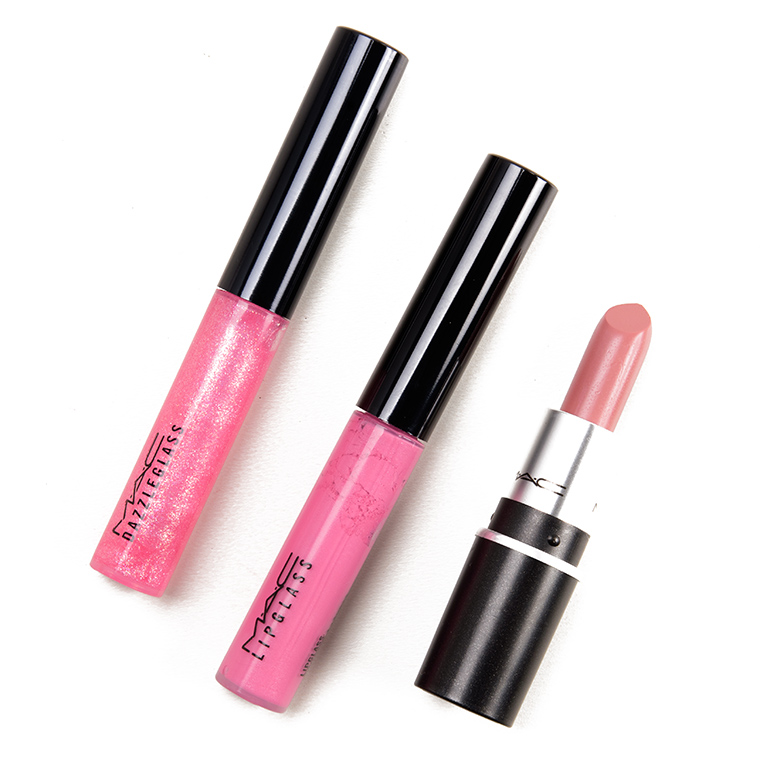 MAC On the Go (Pink) Up Close & Personal On the Go Mini Lip Kit ($20.00 for 0.21 oz.) is a new, limited edition set that includes two miniature-sized glosses and one miniature-sized lipstick. All three shades are new and exclusive to this set (as far as I’m aware!). All three products performed as expected based on past experiences with these formulas.

Don’t Quote Me is a bright, light-medium cotton candy pink base with faint silver and pink pearl. It had semi-opaque pigmentation that applied fairly evenly across my lips, though some product pulled into my lip lines and was severe enough that I could see it in person. The texture was smooth, light-medium in thickness with a moderately tacky feel. It was comfortable to wear over the four hours it lasted for as it was hydrating over time.

The Lipglass formula is supposed to be “pigmented, very shiny and can impart subtle or dramatic color” that can be worn “on its own, over lip pencil or lipstick” and will “condition lips.” MAC could use an update on the description as some shades are more pigmented than others but several are sheerer and likely intended to be that way. The formula has a very glossy, high-shine finish with a light-medium weight and moderate tackiness.

I have found that newer Lipglasses (over the last couple of years) are smoother and not quite as tacky as the formula was many years ago. They wear from three to six hours on me and are usually lightly hydrating. MAC recently updated the shade range and packaging for the range (though the formula was said to be unchanged), so worth noting is that with that packaging change came a reduction in quantity to 0.10 fl. oz. (was 0.17 fl. oz.), which may matter for some but not everyone.

Secrets, Secrets has a translucent, pink-tinted base with flecks of silver and pink micro-sparkle and flecks of glitter. It seemed to have a slightly warmer base, so it enhanced the natural pink tones of my lips and pulled them a warmer pink, but the coverage was still sheer as it wasn’t that sparkly (the formula is supposed to have “medium coverage”). The texture was medium-weight, tacky, and thicker, which a brush-type applicator that didn’t work so well for applying easily due to the smaller size of it. The gloss distributed well across my lips and didn’t emphasize my lip lines. It stayed on well for three hours and was hydrating while worn.

The formula is supposed to have “medium coverage” with a “non-sticky, lightweight and moisturizing” texture that can be worn “alone” or over another lip color. They are vanilla-scented like most of the brand’s lip products. The coverage can vary from shade to shade but most Dazzleglasses are semi-sheer to medium in coverage with light to moderate amounts of larger sparkles. They usually have a mix of finer pearl and larger sparkle/micro-glitter in them, though the consistency is thicker and helps prevent the feeling of glitter on the lips. The one thing I find to be untrue about their claims is with respect to tackiness–Dazzleglasses are absolutely tacky and moderately at that. Most shades last between four and six hours and are lightly hydrating.

Sip the Tea is a soft, light pink with neutral-to-warm undertones and a natural sheen. The lipstick yielded semi-opaque pigmentation in a single stroke, which applied fairly evenly without streaking visibly, but it separated along my lip lines a bit. The consistency was lightweight, thin without being clingy, and had a touch of slip so it didn’t drag during application. It had a Lustre finish, so it actually was much more pigmented than that formula is marketed as. This shade wore well for three and a half hours and was neither drying nor hydrating on me.

MAC Lipstick comes in a variety of finishes, and the pigmentation and wear tend to be dependent on the finish. The sheer finishes, like Lustres, tend to wear for only a couple of hours and have sheer coverage (as designed) and are non-drying. Some of the original Matte shades have a stiffer, drier formula, while newer ones have a more velvety, silicone-feel to them, and the latter are creamier, more comfortable to wear, and easier to apply, but most Matte shades are quite pigmented and long-wearing, though some are drying. The Amplified and Satin finishes tend to have good pigmentation, lightly creamy to moderately creamy consistencies with a bit of shine, and moderate to long wear with deeper, richer shades wearing longer. The Frost and Metallic finishes have the most variance between shades with coverage ranging from semi-sheer to opaque with average wear and non-drying to slightly drying formulas. All MAC lipsticks are vanilla-scented but have no discernible taste.