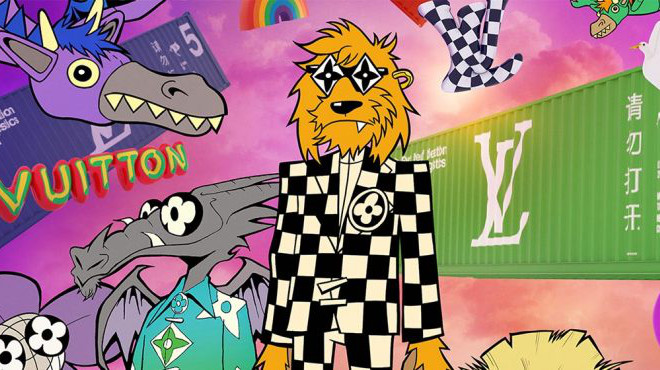 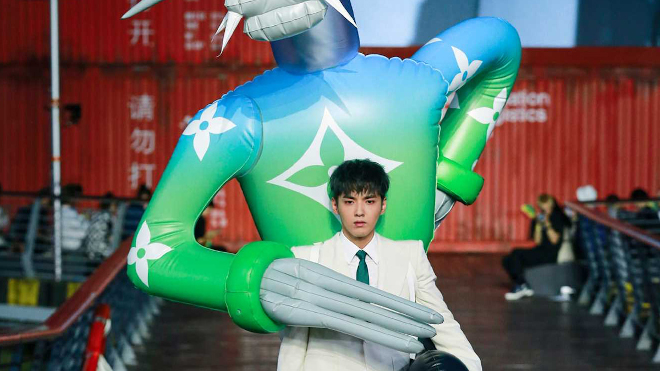 “Gatherings are safe over there,” said Virgil Abloh  as he kicked off the Louis Vuitton Spring 2021 menswear live event. The event was so markedly different from the many “phygital” runway shows which dominated the early stages of the pandemic that Louis Vuitton Spring 2021 menswear felt spectacular. Held in front of local guests (un-masked no less), with a cast of local models. The only connection to Europe, where these shows are typically held was an animated short produced by fellow black director Reggie Know (more on that in a minute).

Abloh started Louis Vuitton’s spring/summer 2021 menswear journey in July with ‘Zoooom with friends’, an animated skit where friends stowed away on Louis Vuitton shipping containers and sailed out of Paris. Indeed, only the Louis Vuitton spring menswear collection crossed continents while the creative director sent his greetings from America while staffers from Louis Vuitton Paris watched from the safety of home under the shadow of respective national quarantine measures. China was the first country to enter a harsh national lockdown and hence among the first to emerge. 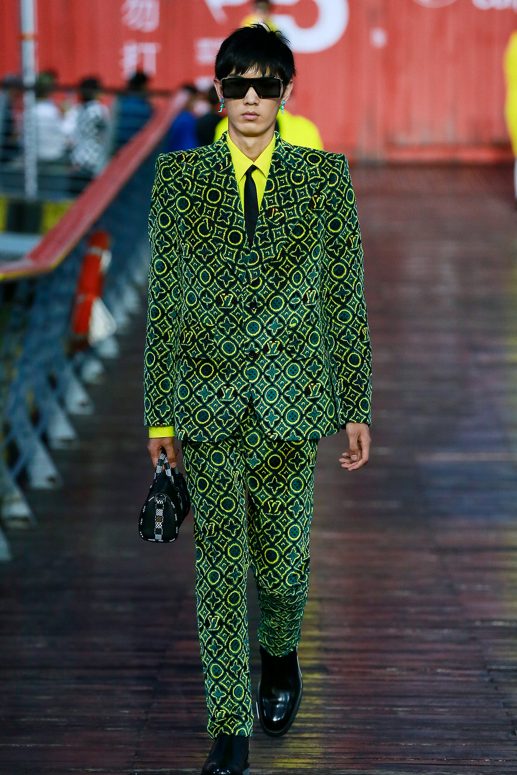 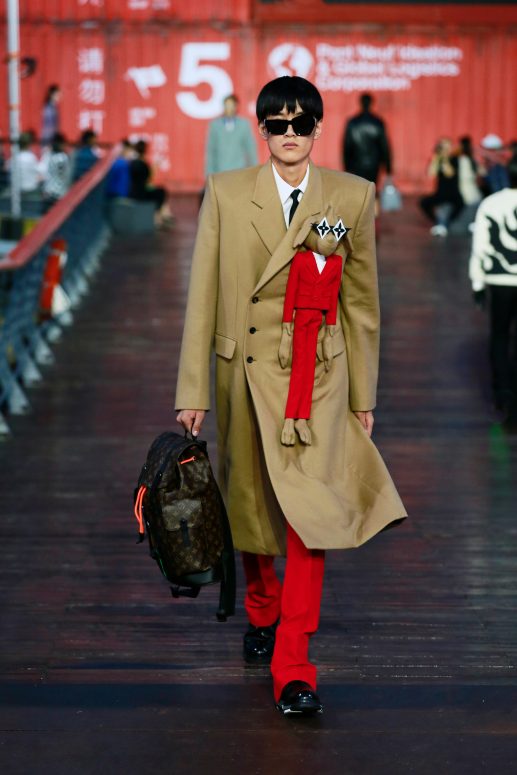 Our cartoon “stowaways” eventually arrive in Shanghai for an old school pre-pandemic era style fashion show, the first in a series of events planned by the Parisian maison, Louis Vuitton Spring 2021 menswear in Shanghai recaptures some semblance of lost normalcy.

“For all intents and nuances, I have often spelled out the interceptive reality of myself as a Black man in a French luxury house,” – Virgil Abloh’s Louis Vuitton Spring 2021 menswear manifesto

A Black man in a French luxury house, Abloh is aware of the immense pressure, men like him and Know understand as Abloh explains in his manifesto. “I am well aware of my responsibilities. Rather than preaching about it, I hope to lead by example and unlock the door for future generations. … It’s my desire to imbue the traditional codes of luxury with my own progressive values. Nuance, like sarcasm, can be difficult to understand.”

Indeed, Louis Vuitton’s spring/summer 2021 menswear blends all the traditional codes of tailoring and luxury with contemporary values. All your classic menswear elements are there; broad shoulders, wide lapels, butt-reaching jacket skirts, casting out the whole Heidi Slimane aesthetic which encouraged men to embrace that Euro-aesthetic. With Abloh, classic men’s tailoring reigns supreme (no pun intended) with progressive twists. Punchy colours abide hoodies, blazers, and overcoats. I didn’t care for giant inflatables of the L.V. cartoon on the red cargo containers but military jackets are realised in shocking pink are en-trend even if a tad daunting for the regular male to pull off, quite a punch on the nose re: male societal programming and the show notes mention as much:

“A wonderland of inclusivity and unity, it imagines the world through the untainted vision of a child, not yet spoiled by societal programming.” 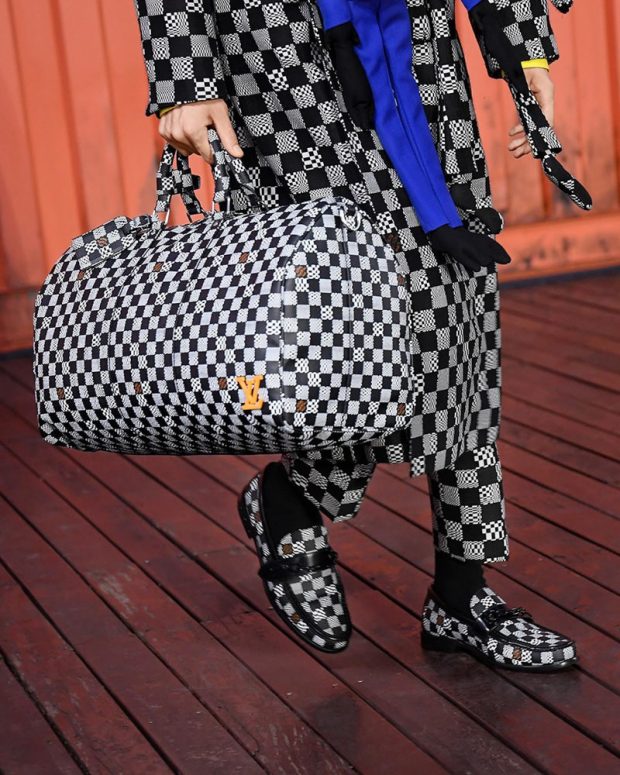 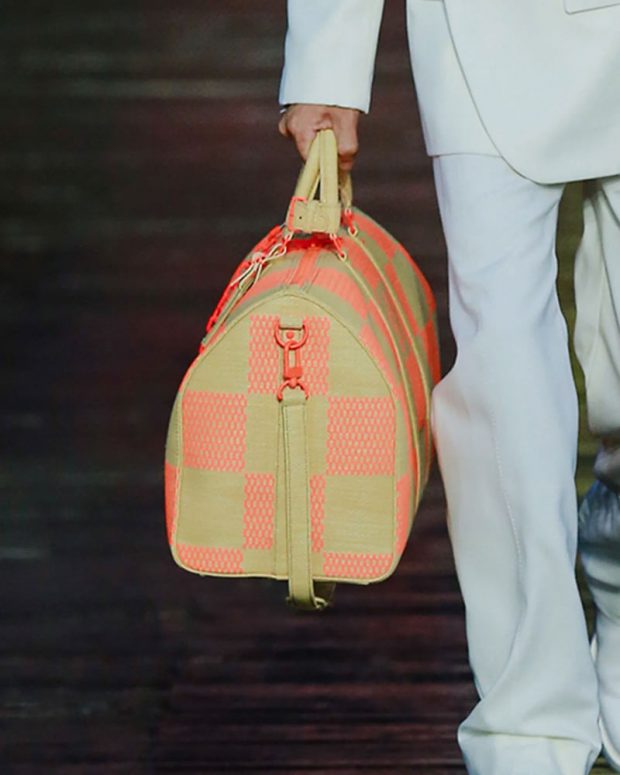 Bold primary hues, boxy silhouettes and the House’s Damier check and its Monogram flower were both key motifs repeated throughout, and while remarkably attention grabbing and head-turning, an argument could be made that the accessories of Louis Vuitton Spring 2021 menswear stole the show: signature LV Trainers, eyebrow-raising eyewear, checked soft hold-alls and trunks played up much needed individualistic graphic whimsy, a panacea for a world which has largely lost a reason to dress up. Louis Vuitton’s spring/summer 2021 menswear lets you know that when you do have to dress up, make it an occasion – a necessary act of playful rebellion in our dour times.