The Lange 1 Moon Phase “25th Anniversary” is the sixth of ten special models to be launched this year to mark the 25th birthday of the Lange 1. Portentously, the timepiece also marks the Saxony manufacture’s entrance into Swiss territory, in Zurich on 11 July 2019

Glashutte, a small Saxony town, is the epicentre of watchmaking in Germany. Population 7.000 (give or take 300 people). It is not only the epicentre of German watchmaking but also its birthplace and so, to say that its inhabitants are deeply specialised and for centuries (since the 1800s), raised in the watchmaking arts, would not be a statement of hyperbole but simple fact. Hence, Lange’s boutique on Bahnhofstrasse 25, Zurich takes special significance given that the Swiss too enjoy a rich heritage in haute horlogerie. 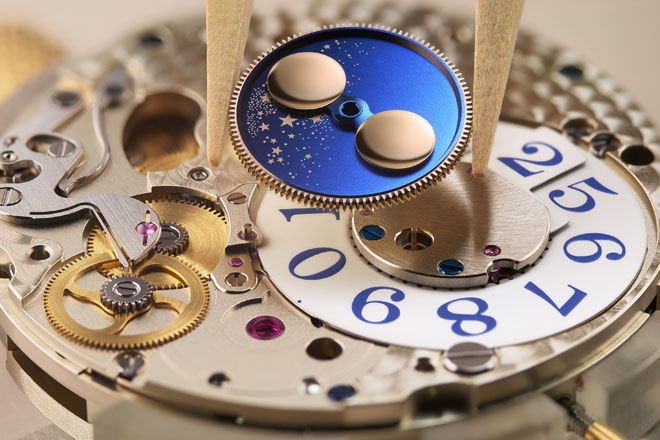 A. Lange & Söhne watch assembly: The solid gold moon phase disc is assembled to the LANGE 1 MOON PHASE. The arrangement of the display is based on a particularly realistic concept. A separate solid-gold moon pursues its orbit in the foreground. Behind it, a celestial disc – also made of solid gold – performs exactly one revolution every 24 hours. On the disc, the different times of day are represented by varying blue hues caused by interference effects. During the day, it shows a bright sky without stars, while at night it depicts a dark sky with prominently contrasting laser-cut stars. Thus, the moon always orbits against a realistic background that doubles as a day/night indicator when setting the watch.

Two years ago, A. Lange & Sohne combined the centuries old tradition of moon phase complications with a practical idea – depicting luna’s phases with a day/night indicator, in essence, the Saxony watchmaker and taken one of the industry’s most romantic complications and added a element which enhanced both its visual beauty and functionality. A. Lange & Söhne watch assembly: A watchmaker assembles the central rotor with ball bearings of the self-winding caliber L086.5 of the SAXONIA MOON PHASE. The platinum centrifugal mass on the edge of
rotor provides an efficient winding. A. Lange & Söhne watch assembly: Caliber L121.1 of the LANGE 1: Cam-poised balance with a free-sprung Lange hairspring, hold by a hand-engraved balance cock.


At its core, the astronomical moon phase requiring correction only once every 122.6 years because its moon disc is driven by a wheel with 135 teeth for precise lunation of 29 days, 12 hours and 45 minutes instead of the more traditional horological moon phase disc with 59 teeth for lunation of 29.5 days thus requiring frequent correction, is a harmonious orchestra of 438 components with tolerances of hundredths of a millimetre,

A. Lange & Sohne is quite tacit in not pursuing complications or innovations for the sake of accruing kudos. Instead, theirs is a watchmaking philosophy of practicality (so German). During the daytime, the moon of the Lange 1 Moon Phase “25th Anniversary” is depicted against a bright blue starless sky; at night, it contrasts against the dark blue heavens with 383 sparkling stars. Thus, the moon always shows itself against a realistic background that doubles as a day/night indicator, making it easier to set the time because it assures that the date switches at midnight and not, inadvertently, at 12 noon. Since 2002, the Lange 1 Moon Phase has been a cornerstone of the Lange 1 collection, its subsequent evolution in 15 years later demonstrated how the Saxony manufacture has continued in its penchant for disruption, much like it did at re-launch in 1994.

The raison d’etre of the Lange 1 Moon Phase “25th Anniversary” is simple enough in ideation: a two layer moon-phase display with a day/night indicator – Consisting of a solid-gold celestial disc with blue gradation completing one full revolution about its own axis every 24 hours, simulating a full day and when night falls, the silvery moon on a midnight backdrop of stars.

Based on the Lange 1 calibre L121.1 launched in 2015, the brand’s 25th Anniversary Moon Phase bears a manually wound calibre L121.3  with 70 additional parts for the moon-phase display and the day/night indicator integrated in the movement so masterfully that it adds only 0.4mm to the height of its base movement while keeping a power reserve of 72 hours. 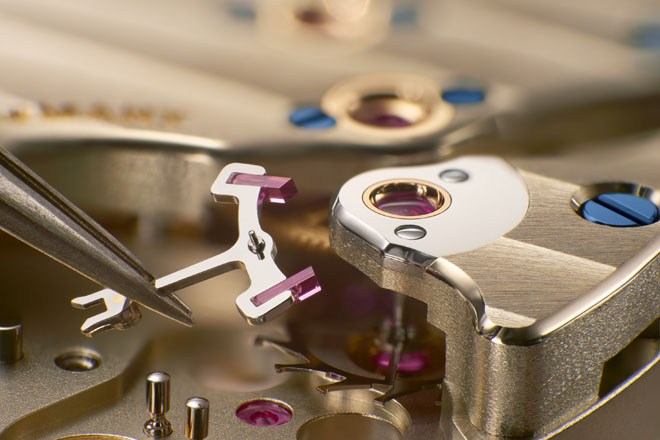 A. Lange & Söhne watch assembly: Assembly of the lever to the escapement system of caliber L121.3. The watchmaker adjusts the pallets so that they perfectly interfere with the teeth of the escape wheel. A. Lange & Söhne watch assembly: A gold chaton is oiled. Different oils and greases are used during the assembly process to reduce friction. A complicated timepiece features some hundreds of such points. 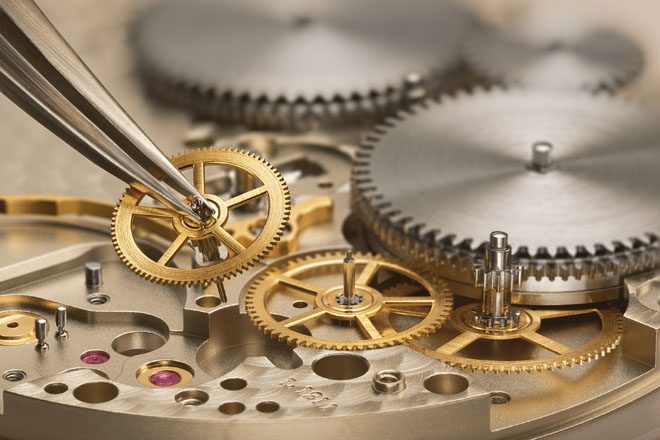 A. Lange & Söhne watch assembly: Assembly of the LANGE 1 MOON PHASE, which was introduced in 2017. The gear train and the twin mainspring barrel of caliber L121.3 are assembled to the main plate
which is decorated with perlage finish.