Historically speaking, the skies have held mankind’s ability to discern time – from the positions of the sun, to the phases of the moon, and the ever-changing constellations depending on time of year, astronomical indications have inspired watchmakers and artisans alike and for the better part of its modern history, the Jaeger-LeCoultre Manufacture in Le Sentier.

For 2019 celebrating its 15th year of partnership with the prestigious Venice International Film Festival, Jaeger-LeCoultre takes aesthetic cues from the night skies once more and combines it with the brand’s favourite horological leitmotifs – the flying tourbillon and astronomical complications. Jaeger-LeCoultre has been the main sponsor of the Venice International Film Festival for over a decade, honouring personalities who have made significant contributions to contemporary cinema with the Jaeger-LeCoultre Glory to the Filmmaker Award.

This year, the Grande Maison debuts its own stellar personalities – the Jaeger LeCoultre Master Grande Tradition Tourbillon Céleste and the Jaeger LeCoultre Rendez-Vous Celestial, to be presented during the 76th edition of the oldest film festival in the world which began on 28 August and culminates on 7 September 2019. 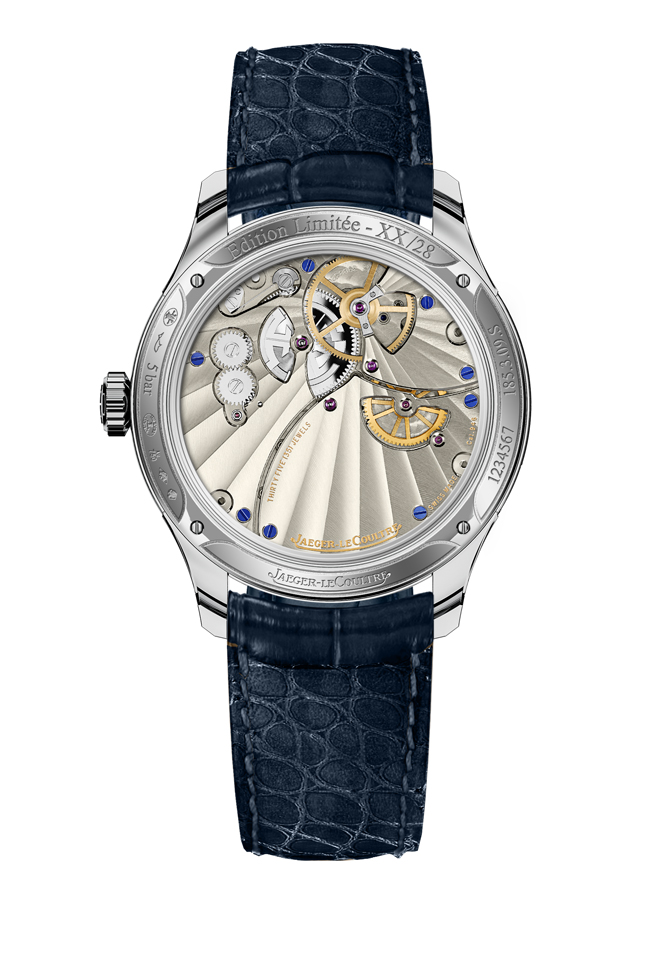 As a vital aspect of popular culture, film can inspire life just as the natural world inspires the artisanship of fine micro-mechanisms, each providing a quotidian perspective, either transmitted to our consciousness through projected light beams on screen or from the confines of slightly less than 2 inches of wrist – timepieces like the Master Grande Tradition Tourbillon Céleste features an orbital flying tourbillon that makes a complete turn of the dial which makes a complete orbit over the length of a sidereal day, a reference to distant stars rather than the traditional reckoning using the sun. The journey of flying, gravity-defying escapement takes precisely 23 hours, 56 minutes and 4 seconds, complemented by a backdrop of the Northern night sky showcasing the constellations of the zodiac calendar framed by an outer ring displaying their associated symbols. A tiny gold marker, seen just beyond the orbit of the flying tourbillon, revolves around the dial annually, an indication of where we are within this alternative and ancient star calendar. 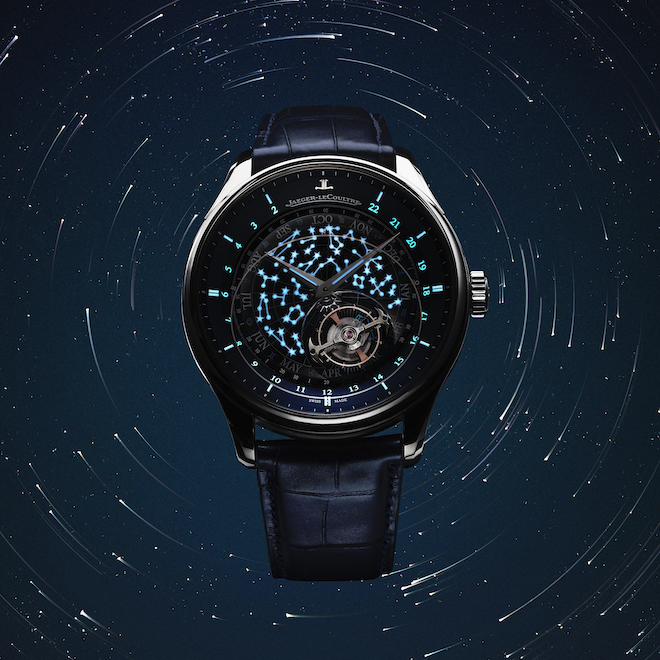 Though the Jaeger LeCoultre Master Grande Tradition Tourbillon Céleste has differed from previous editions with a tone on tone cerulean punctuated with white numerals and light blue  hour markers and constellations have been filled with Super-LumiNova™, evoking the glow of heavenly bodies on a clear night.

Revisiting le Grande Maison’s favourite muse – the heavens, on the occasion of La Biennale di Venezia, the Le Sentier manufacture manages to replicate the vastness of the cosmos within the 37mm Jaeger-LeCoultre Rendez-Vous Celestial in a remarkable feat of technical engineering. 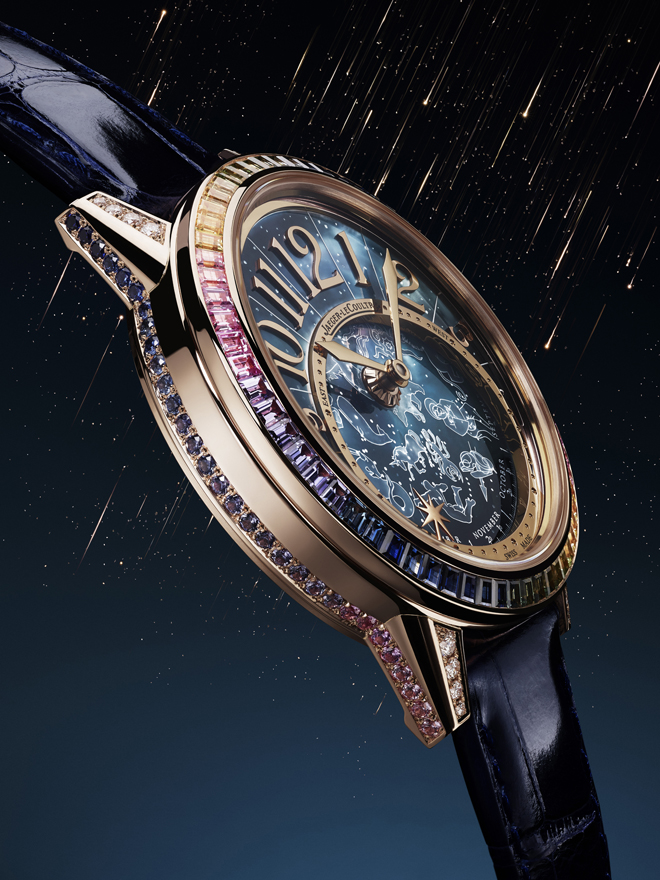 Aided by unparalleled expertise in in-house horological and artistic métiers, the alluring Rendez-Vous Celestial is a resplendent feminine counterpart to the undeniably masculine (but irrepressibly beautiful) Jaeger LeCoultre Master Grande Tradition Tourbillon Céleste. Manufacture Jaeger-LeCoultre practices no fewer than 180 watchmaking and watch-related skills in its Vallée de Joux facility, but both celestial timepieces capture the core zeitgeist that defined its founding since 1833 – a tradition of eternal honing of craft and the pursuit of excellence.

Here, Jaeger-LeCoultre interprets the famed Aurora Borealis or Northern Lights via the metiers of jewelcrafts. Named after the Ancient Roman goddess of the dawn, the Aurora takes physical form by way of hand-painted mother-of-pearl dial reproducing the ethereal swirls of the Northern Lights – framed by a bezel of multi-coloured sapphires in gorgeous gradient hues of Aurora and then presented within a pink gold case

The Rendez-Vous was introduced in 2012 as a collection specific to women rather than produced gem-set re-sized men’s editions. Jaeger-LeCoultre’s mechanical wizardry was interpreted through feminine lenses in a variety of materials and aesthetic treatments through the maison’s signature Metiers Rares® and today, the 2019 Rendez-Vous Celestial is emblematic of the brand’s mastery of gem-setting, and hand-painting, capturing the spectacle of the otherworldy play of lights and rendering the vivid greens, purples, pinks and blues in such subtle and muted forms that they look alive as if in dance across the nacre “sky”.

Its quiet elegance is enhanced by the asymmetry thanks to a dial is formed of two sections, set at different heights. On the upper section, the curvy Floral numerals – a signature of the Rendez-Vous collection – are graduated in size, to form a crescent that hovers above the lower dial. Outlined by an elliptical band of pink gold that draws the eye deeper into it, this lower section carries a hand-transferred imprint of a star chart, together with the signs of the Zodiac and names of the months. 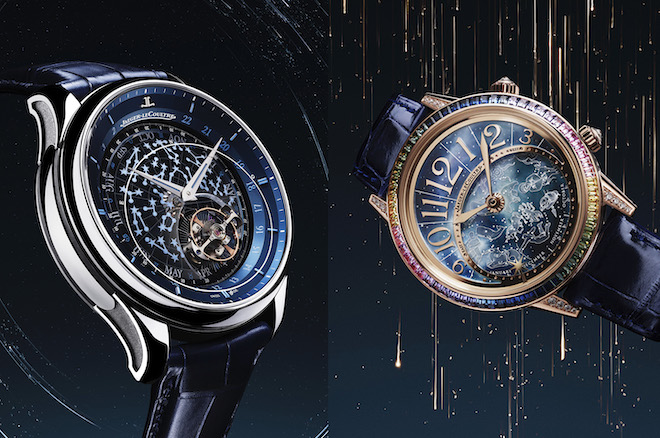 Displaying the night sky as it appears in the Northern Hemisphere, specifically above Jaeger-LeCoultre’s home in the Vallée de Joux, the Master Grande Tradition Tourbillon Céleste depicts sidereal time by way of Zodiac calendar and sky chart while the Rendez-Vous Celestial displays the changing positions of the constellations in real time (i.e. daily). The automatic mechanical movement Jaeger-LeCoultre Calibre 809/1 turns the disc counterclockwise in relation to the stars, almost imperceptibly, in step with the rotation of the Earth in 23 hours, 56 minutes and 4 seconds – much like the orbital flying tourbillon on its masculine counterpart.

A hand-polished golden star – emblem of the Rendez-Vous collection – is set on the edge of the dial of the Rendez-Vous Celestial; by turning the second crown, it can be moved into position to mark the time of a special rendezvous – a particularly romantic idea to mark a crucial milestone or anniversary. Not quite an orbital flying tourbillon, but then again, the men don’t get to enjoy the rainbow of colour-graduated circle of 64 baguette-cut sapphires complementing the rich tones of feminine dial. 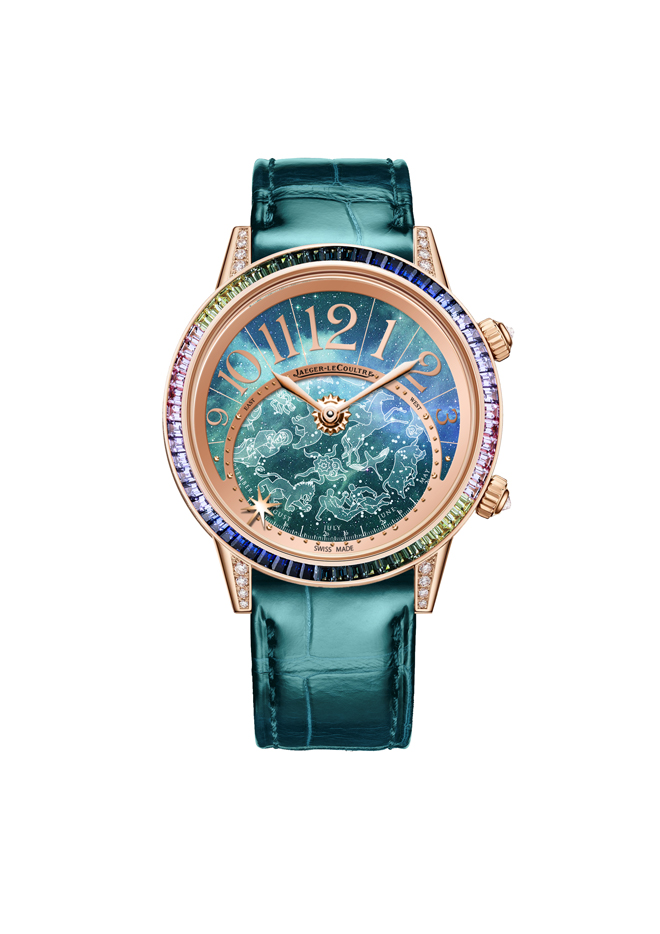 
That said, the Jaeger LeCoultre Master Grande Tradition Tourbillon Céleste receives a new case much like the one first seen in the Master Grande Tradition Gyrotourbillon Westminster Perpétuel released earlier this year. The complex blend of satin finish to micro-blasting and mirror polish provides a beautiful 43mm white gold home to the high complication Calibre 946.

Both limited edition timepieces, 28 for the Jaeger LeCoultre Master Grande Tradition Tourbillon Céleste and 18 (+18) for the Jaeger-LeCoultre Rendez-Vous Celestial might have been meant to celebrate cinematic achievements of the Venice International Film Festival but in poetry, it manages to the naturalist drama  and rhythms of life in parallel with the majesty of the universe.

By admin 11 mins ago

Quote of the Day
Voltaire
We never live; we are always in the expectation of living.
Ashburn