One of the most free-spirited, diverse and exciting cities in Europe, Berlin is a haven for lovers of culture, fine food, great beer and, of course, luxury accommodation. But if you’re looking to stay in one of one of the city’s few original five-star hotels steeped in history and architecture, while being close to some of the most iconic landmarks in the city, be sure to check in at Hotel de Rome. 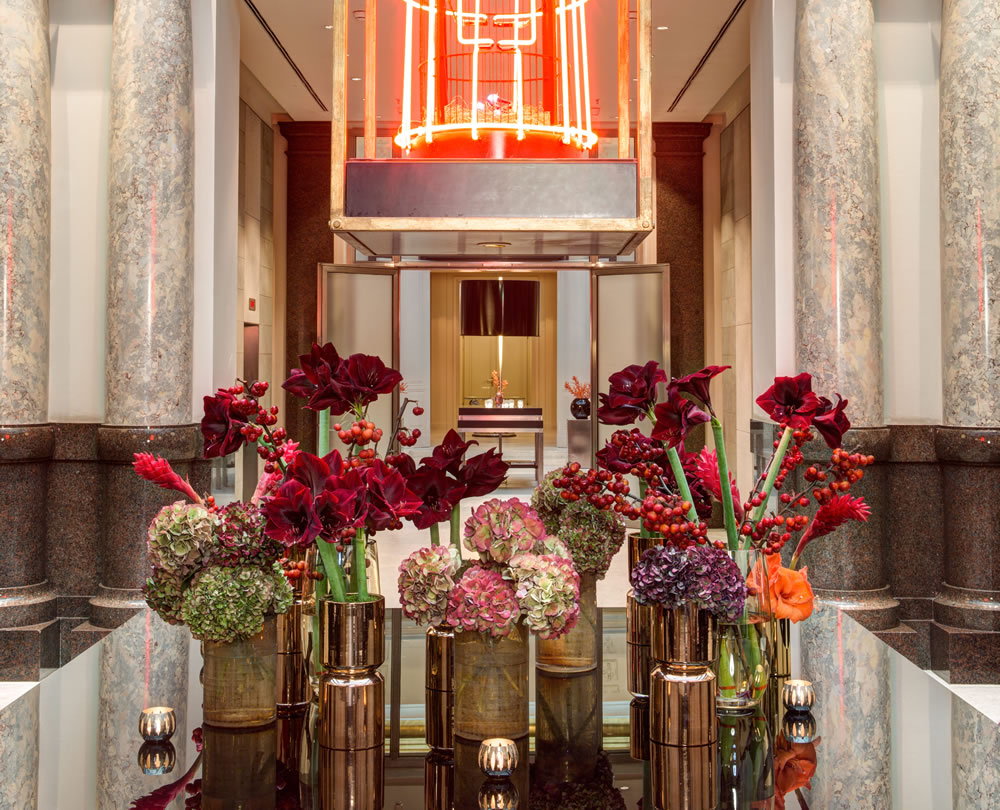 Located on historic Bebelplatz, Hotel De Rome is one of the most prestigious luxury hotels in Berlin

Located on the upscale Bebelplatz, upon entering we were welcomed by a top-hatted doorman who directed us to an opulent high-ceilinged reception area which boasts not two, but four black velvet sofas. These surround a grand table with coffee and welcome bubbles while a pink neon art deco birdcage hangs above. It’s safe to say, this is one seriously luxurious entrance. This converted bank headquarters was constructed in 1889 by master builder of the government, architect Ludwig Heim, and designed to retain the original features of the bank it once was. Interiors such as the historical suites, which are located in the former director of the bank’s offices are particularly noteworthy. Fascinatingly, as the building witnessed the Second World War, you may still find shrapnel in the walls and wood panelling in the suites that weren’t destroyed in battle. 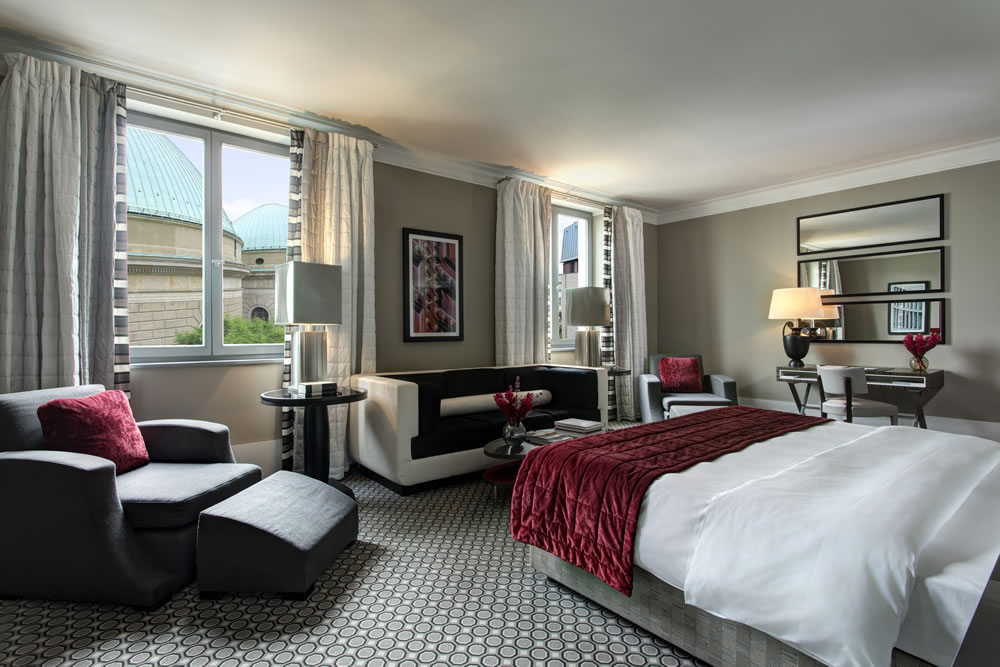 Sleek and stylish, Hotel De Rome’s 108 stunning rooms and 37 suites offer an invitation to share in Berlin’s history and be part of the city’s vibrant present

If you’re not staying in one of the 36 suites however, don’t fret – each of the other 109 luxurious guest rooms are fully equipped with the usual amenities: a minibar, LCD TV, electronic safe, radio and phone as standard. The only slight design flaw we could see – there wasn’t an easily accessible plug point on both sides of the bed – was more than made up for by the fact that every huge bathroom contains a separate bathtub and shower, ideal for a relaxing soak after a long day of history lessons. 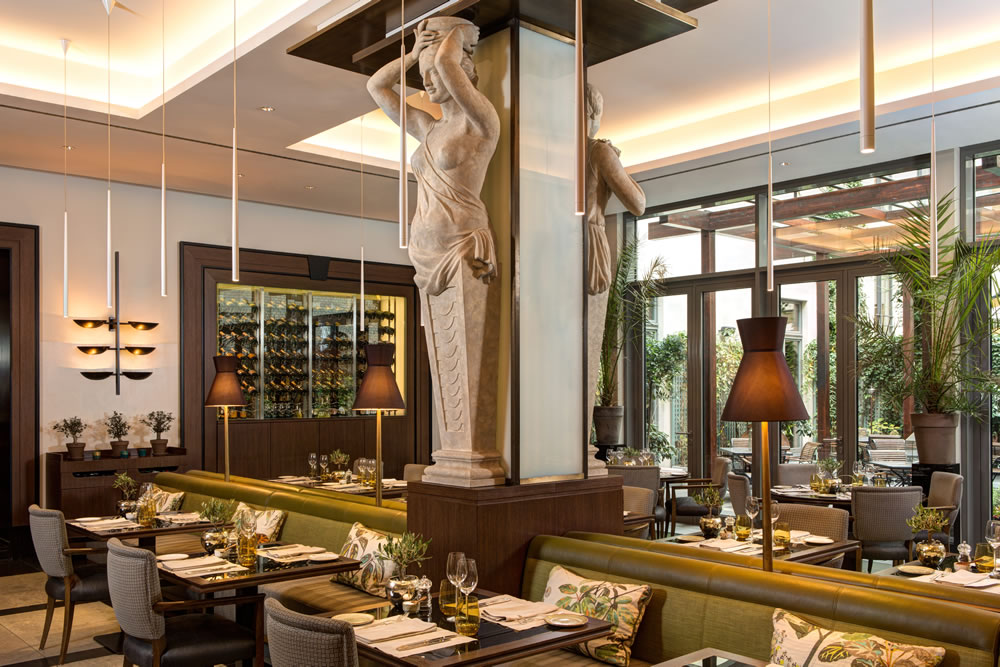 Elegantly weaving authentic regional cuisine with Berlin creativity, La Banca is a glamorous, relaxed Italian restaurant in the heart of the German capital

When it comes to your culinary experiences at Hotel de Rome, it’s safe to say you’ll be eating like a king (or queen!) from morning to night. Hosted at the hotel’s main restaurant, La Banca, breakfast is quite the feast with an indulgent buffet style affair. Think smoked salmon, quality cold cuts of meat and cheese, a selection of cereals, yoghurts, chia puddings and pastries, there’s also the option to order hot breakfasts a la carte, from eggs benedict to fluffy pancakes that come drizzled with delicious sugary syrup. Smoothies, a host of teas and juices are also readily available, or why not start the day as you mean to go on with some free-flowing Prosecco? Didn’t think it could get any better? Breakfast is served until 2pm on Saturdays to cater to Berlin’s population of party people, and 12pm on Sundays making it ideal if you’re after a particularly long lie in.

Dinner is also served in La Banca, and is the perfect way to kick off your night in style. Indulge in delicious authentic Italian cuisine in contemporary yet formal surroundings – the restaurant, which seats up to 120 guests, looks onto an intimate courtyard “La Banca Garden” which is ideal for a little al fresco dining during the summer. The restaurant is also home to ‘brunch’ every Sunday from 12.30-3.30pm, complete with live Italian music for those who aren’t quite ready to finish the weekend’s celebrations on Saturday night.

The neighbouring La Banca Bar is a stylish post-work cocktail spot, serving up classic and signature cocktails. Can’t see what you want? Just ask. We were particularly craving an early evening Espresso Martini, which although wasn’t on the menu, was concocted to perfection by the trendy mixologists. Moreish chilli peanuts and wasabi peas are served alongside your drinks as standard, so you can nurse your drink as you sink into the plush velvet sofas which you won’t want to leave. 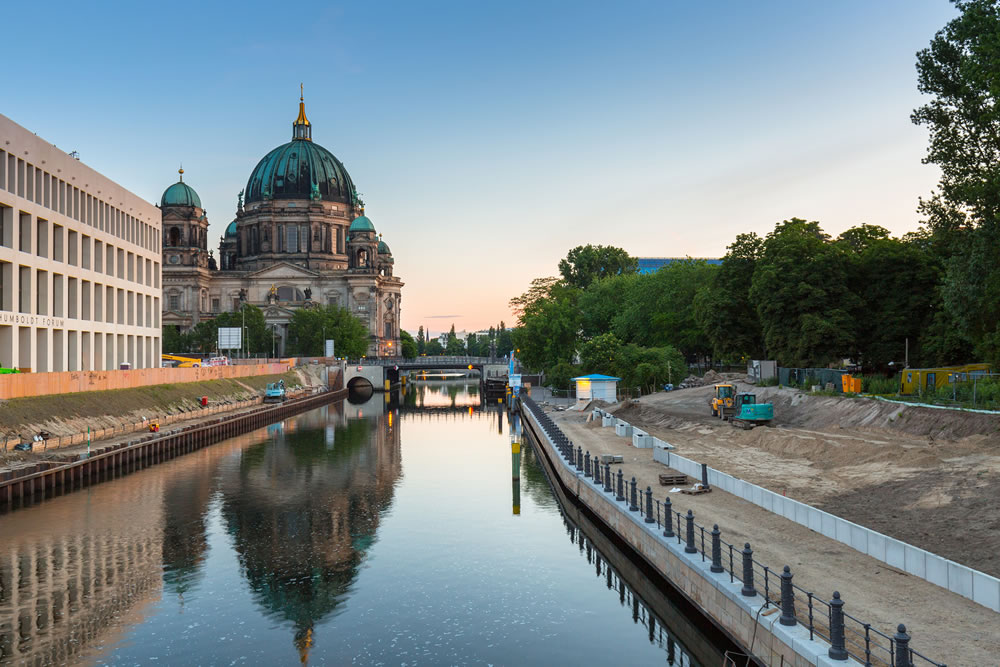 The magnificent dome of the Cathedral Church (Berliner Dom) is one of the main landmarks in Berlin’s cityscape. Image credit: Patryk Kosmider/Bigstock.com

As the vicinity of the hotel is home to so many historical sites, we were able to get to most places on foot with ease. Step outside the front door and you’ll be standing right beside the memorial on Bebelplatz which is known as the site of the infamous book burning ceremony, showcasing empty bookshelves where 20,000 books were once displayed and burned. Staatsoper Unter den Linden (Berlin State Opera), Berliner Dom (Cathedral Church), Museumsinsel (Museum Island) and Old National Gallery are also close by, while Humboldt University – the establishment where Albert Einstein famously taught and Marx and Engels studied – is also a stone’s throw away.

Once you’ve explored the city, wind down in the hotel spa which, unsurprisingly in this history-soaked hotel, was formerly a bank vault. Here you’ll find a 20m indoor pool, Finnish sauna, steam room, six treatment rooms and a fully equipped gym. The perfect antidote to a long day of history seeking. You’ll notice a lot of artwork on the walls of the hotel, too – especially in the restaurant. 650 pieces to be precise, and Hotel de Rome is a popular venue for exclusive and out of the ordinary art exhibitions. It’s currently hosting the “Karl Lagerfeld in Berlin” exhibition by Berlin photographer Daniel Biskup, in tribute of the one-year anniversary of Lagerfeld’s death. This will consist of 20 portraits of the beloved designer and former guest, who was a regular at Hotel De Rome. The exhibition will run for three months ​until 20 May 2020​ in the grand lobby and foyer, admission is free.

Rooms can be booked from £472 per night.