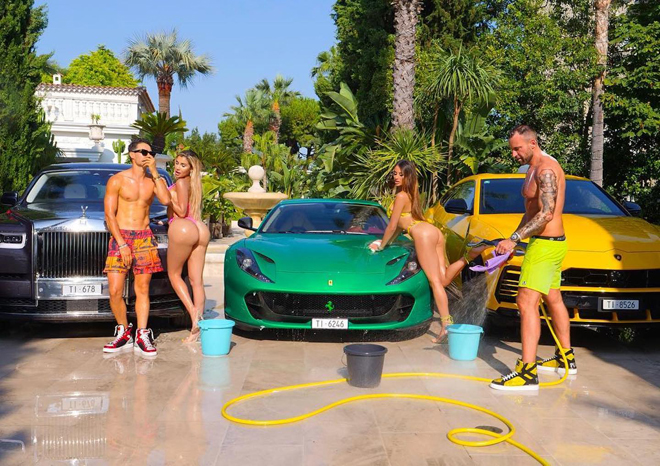 Maranello based Ferrari S.p.A. has sent designer Philipp Plein a “cease and desist” legal letter citing Plein’s use of Ferrari supercars on his Instagram account as one that “tarnishes the reputation of Ferrari’s brands”, giving the 41 year old German designer 48 hours to remove the offending images from his Instagram feed. Philipp Plein however, responded to the Italian luxury sports car manufacturer, not by deleting his allegedly offensive Instagram posts but posting Ferrari’s takedown letter along with a photoshopped image of CEO Louis Camilleri as a clown on his social media feed instead. 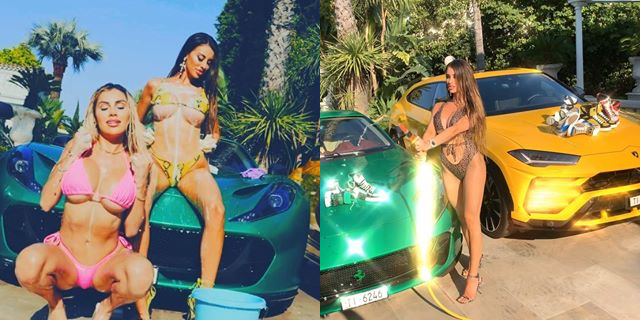 “Can’t even put in words how disappointed and disgusted I am about this unfair and totally inappropriate claim against me personally. Obviously I love cars and ESPECIALLY FERRARI !!!!” – Plein in an Instagram post accompanying the lawyer’s letter 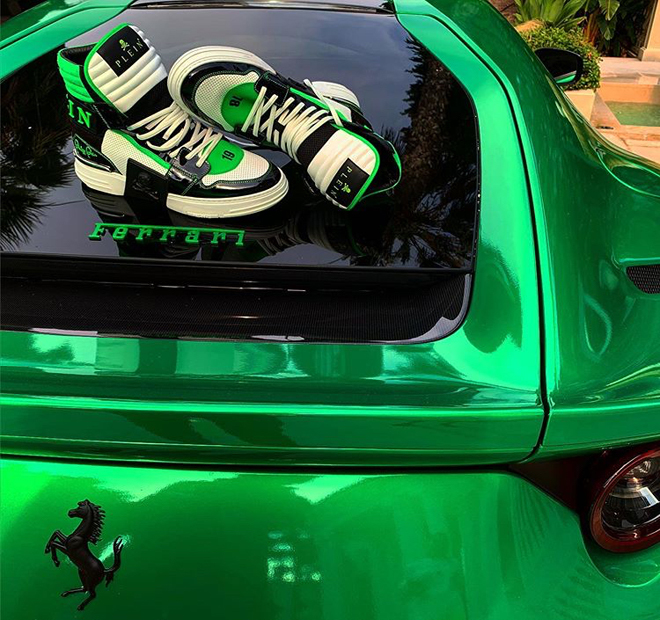 Ferrari doesn’t like that the German fashion designer “causes Ferrari further material damage” because Plein’s been posting images of his namesake sneakers on his own electro-lime green 12-cylinder Ferrari 812 Superfast.  Ferrari’s letter to Plein alleges that the designer has been using Ferrari’s trademarks for his own “promotional purposes” in order to increasing the visibility of his own brand and products. That said, while the supercars are Plein’s own, Ferrari’s claim amounts to a legal challenge that Plein is using the automotive icon to bolster his own brand and tarnish Ferrari’s.

Plein further responded with a counter-proposal, rallying his fans to post pictures of their Philipp Plein kicks on top of their luxury cars with the hashtag #PPKICKSGANG. 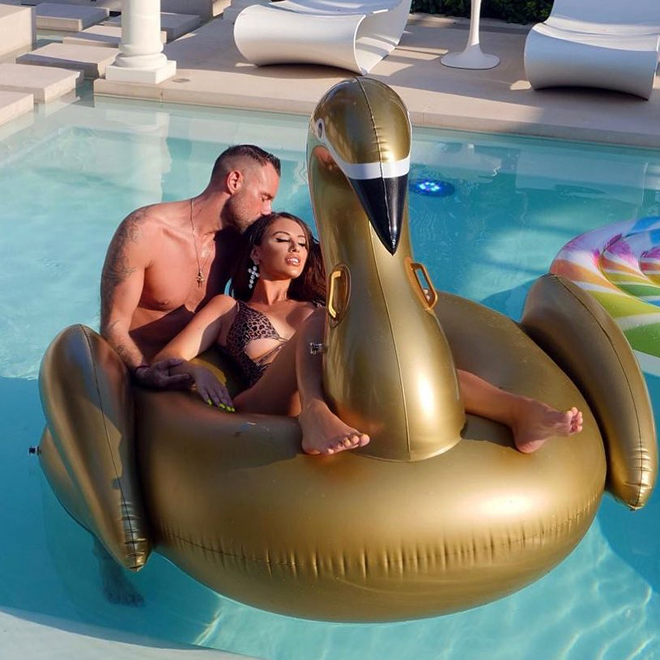 Philipp Plein’s instagram posts are not quite different from other millionaire ballers – case in point: Dan Bilzerian

That said, it could be more than just displaying exorbitantly priced high top sneakers alongside the signature rearing horse. Could it be the tawdry displays of overt sexuality by way of skimpy bikini models? Oddly, supercars like Ferrari have often found themselves as a “prop” for skimpily-dressed “import models” in everything from car magazines to automotive calendars for commercial sale and these have not incurred Marenello’s legal ire either. Fact is, though there are few brands in the world synonymous with ostentatious displays of wealth and life in the fast lane, Ferrari’s own social media accounts are devoid of such overt displays of sex. 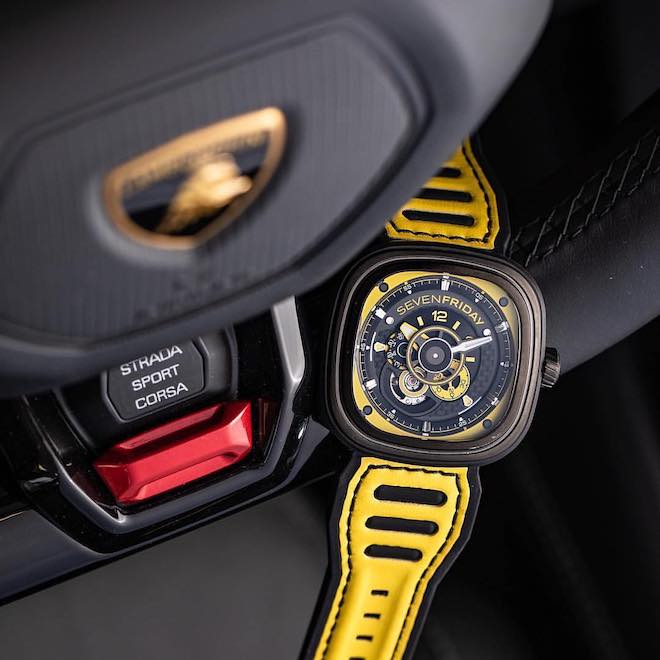 The real dilemma: How brands interact with fans in the Age of Influencers

While brands like Audemars Piguet have leaned into their hip hop cultural-associations by co-opting and even partnering with them on specially designed collections like the ones with rapper Swizz Beatz; other brands like champagne maker Cristal have found it difficult to shed their associations with rap stars and non-promotional appearances in their music videos, Cristal sprayed in perceptually “vulgar” displays of wealth. 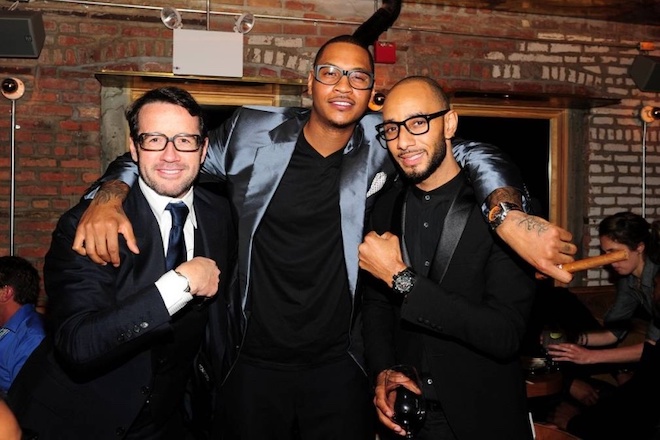 That said, Ferrari is more than just a luxury carmaker. It is a brand with lucrative licensing arrangements with Oakley, Tod’s, Movado, and even a theme park in Abu Dhabi, Ferrari World. (Business Insider has a list of some of the most expensive Ferrari branded accessories). In 2011, the Maranello brand announced a long-term extension to their partnership with global sport-lifestyle brand Puma, which would continue to produce Ferrari branded products including accessories and footwear. Understandably, Plein’s perceived co-option of this association by posing similarly colour-themed sneakers right beside Ferrari’s branding could be a sore point for the Italian manufacturer’s legal department.

Lawyers that Bloomberg spoke with believe that legal definitions in this current Age of Influencers are not as clear cut. Trademark specialist Karin Sandberg from Hamburg law firm Harmsen Utescher said, “The lines between what is private and what is public and what is commercial are increasingly blurred.” Indeed, the lime-green Ferrari 812 Superfast is Plein’s own, as are those shoes – in fact, many other brands, even those where the line between owner and label is fairly distinct like SevenFriday have on occasion positioned their own watches on Ferrari and Lamborghini dashboards to little legal consequence. 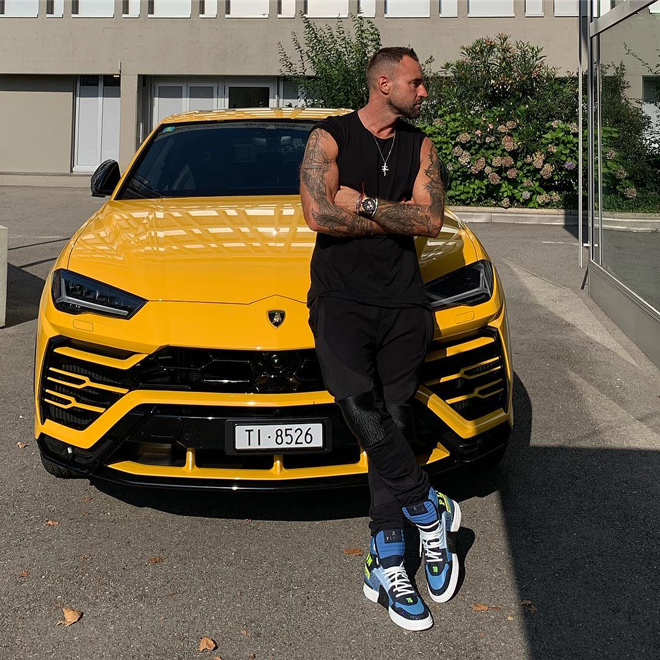 Incidentally, Plein has also posed his sneakers and bikini models next to his own Rolls-Royce and Lamborghini URUS to nary a legal drama, hence, this latest case by Ferrari will prove to be a bellwether for how influencers might be able to leverage on the “star-power”  afforded by association with these super-brands in the future.