Never believe anyone who tells you a suit is made for year-round wear. Although you could say this about any fabric – viscose to fleece – comfort always comes first. That cool, breezy feeling your linen or seersucker suit gave you all through spring and summer now gives way to the chills. Sure, you could wear a set of base layers underneath, but doesn’t it make more sense to put on a heavier fabric, rather than just layer and layer to stave off the shivers?

For suiting beginners (and those wanting more than one style in their wardrobe), the garment can be divided up into two clear types. Summer suits are lighter in weight, nearly always unlined, and made with breathable, thinner fabric that lets the air flow through to cool your skin. Winter or cold-weather suits go in the opposite direction, with heavier woven or worsted materials that trap body heat. Materials, here, take a more economical approach: Refined and warm, without being bulky, and substantial enough to require fewer layers. Between these two, a summer suit has you good to go through spring, while a winter suit often makes its first appearance in mid-autumn, depending upon where in the world you live.
With this very general picture in mind, let’s go over the basics of winter suiting: 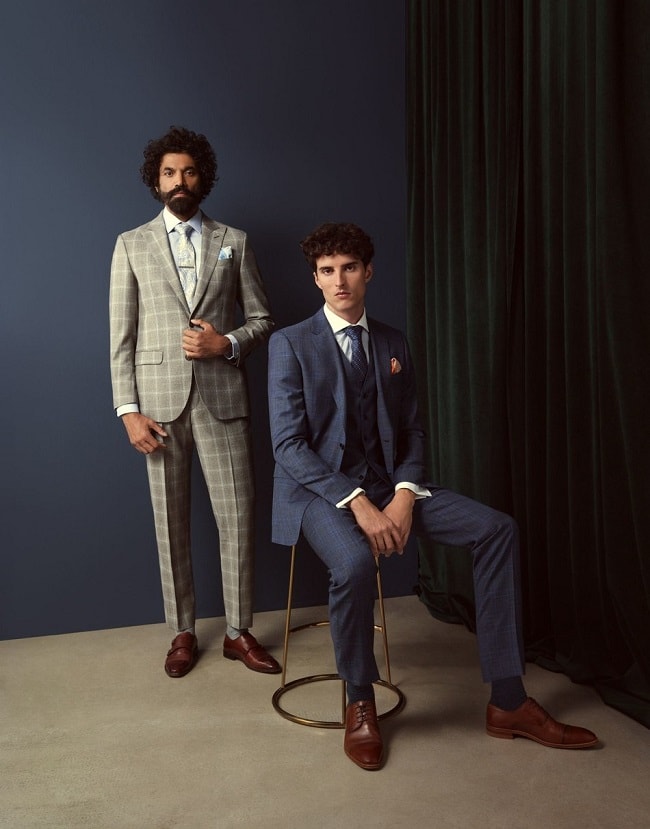 Whereas summer is all about looking sharp and feeling cool, winter shifts toward appearing professional without shaking in your trousers – outdoors or in the office air conditioning. While fabric plays a primary role, the first differences begin with the suit’s design. Not cheapening the feel and leaving you freezing, the suit jacket is always fully or partially lined – otherwise, it serves no other functional purpose. As an added benefit, lined jackets offer better resistance and durability, resulting in less ironing, maintenance, and trips to the dry cleaners. Additionally, both the jacket and trousers are made with thicker fabric – 16 oz. on average, regardless of the textile used. At this weight, the fabric’s thick enough to hold body heat close, especially when you’re decked out in flannel or wool, yet doesn’t feel heavy nor will it weigh you down. You’ll be warm enough that all you’ll need is a shirt and undergarments below, but the fit is streamlined enough to wear an overcoat or trench on top. The heavier weight, too, offers a secondary benefit: Your suit fabric is less likely to wrinkle – one of the downsides of many summer textiles – and still drapes well for a natural feel and structure. 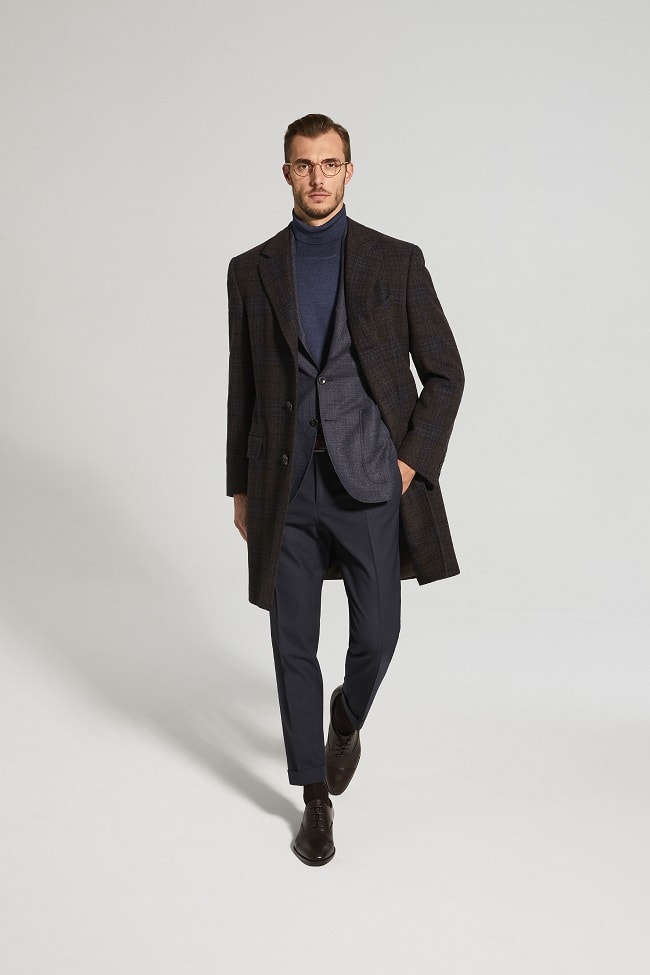 Wool is the quintessential winter suiting fabric, replacing flannel and other cotton-based materials for the most part. Traditional wool – whether in standard or worsted forms – delivers a two-sided benefit. One, it naturally holds onto warmth without cumbersome, awkward insulation underneath. But, you’ll be less likely to overheat, as the fabric naturally wicks away moisture, lets your skin breathe, and controls odours. As we’ve mentioned many times, this versatility makes wool a must-wear for hiking and other outdoor pursuits.

Only, unlike that pair of merino socks, your suit may be made out of worsted wool. While it still harnesses the fabric’s natural properties, worsting gives it a more polished appearance. The fabric is first carded before it’s spun – essentially, straightening it to get rid of the nap created by shorter fibers – and woven, and the result has more of a sheen and less of a matte appearance. Uniform long strands further improve its strength, meaning it’ll last you season after season.

Beyond traditional worsted wool, this technique is used to create flannel, Tweed, and gabardine – all also used for suiting, which we’ll explain below.
As you shop around, you’ll come across wool suits labeled ‘Super 100s,’ ‘Super 120s,’ and similar terms. Used since the 1700s, the figure applies to the number of hanks – or 560-yard spools – a pound of raw wool can create, and the higher the number, the finer the wool and the greater the quality. ‘Super,’ though, doesn’t specifically mean ‘super-fine’; instead, it’s added to every worsted wool textile that crosses the 100-hanks threshold. Generally, higher fabric numbers correlate with higher pricing. However, it further indicates a softer, silkier-feeling textile that is less likely to succumb to wrinkling. 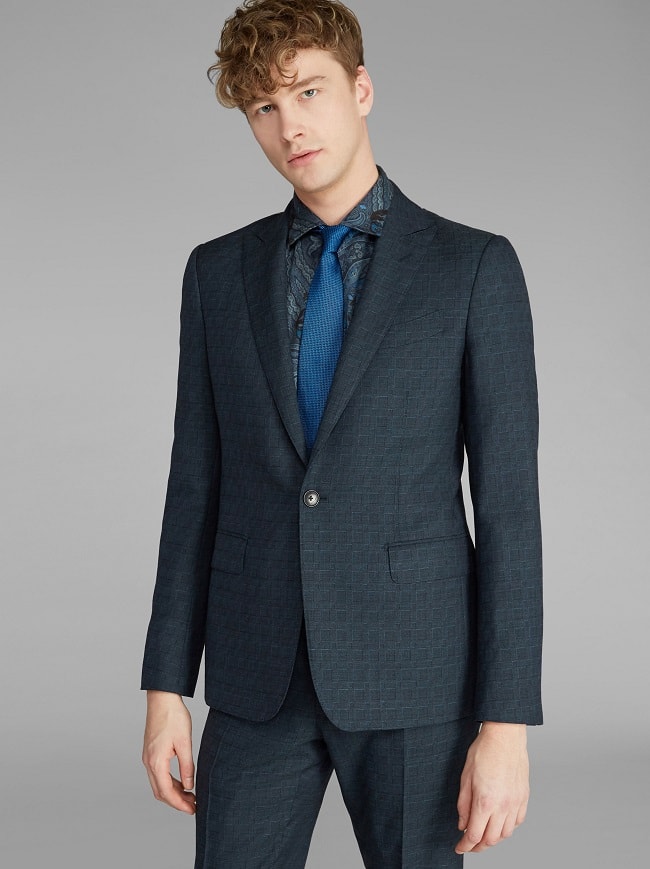 Flannel, which we typically associate with shirts, has long been a wool-based textile, although modern fabrications blend in cotton or go the 100-percent cotton route. Although we’re all familiar with the concept of the “man in the grey flannel suit” – both in relation to the 1950s book and the Gregory Peck-starring movie and the image it conjures – winter suiting has slipped away from this material in recent years, but it’s starting to make a comeback. Unlike pure worsted wool, flannel suits tend to look like felt and feel just as stiff – a downside for some wearers. Beyond its somewhat dated reputation, flannel is fairly soft yet substantial and structured, and appeals to the man with fine, retro-leaning tastes.

Tweed has also been making a comeback, with its heritage being part of its appeal. Another wool-based textile that incorporates a percentage of cotton, its history goes back to Scotland in the 1700s, where it was woven to withstand the damp, cold northern conditions. Its thicker construction also lasted through plenty of winters, and with a plaid or check pattern woven in, the rest of the world took notice. Today, Tweed suits play up this textural aspect – making them appear somewhat less formal for the workplace – but are a solid choice for dressy casual wear throughout the season. 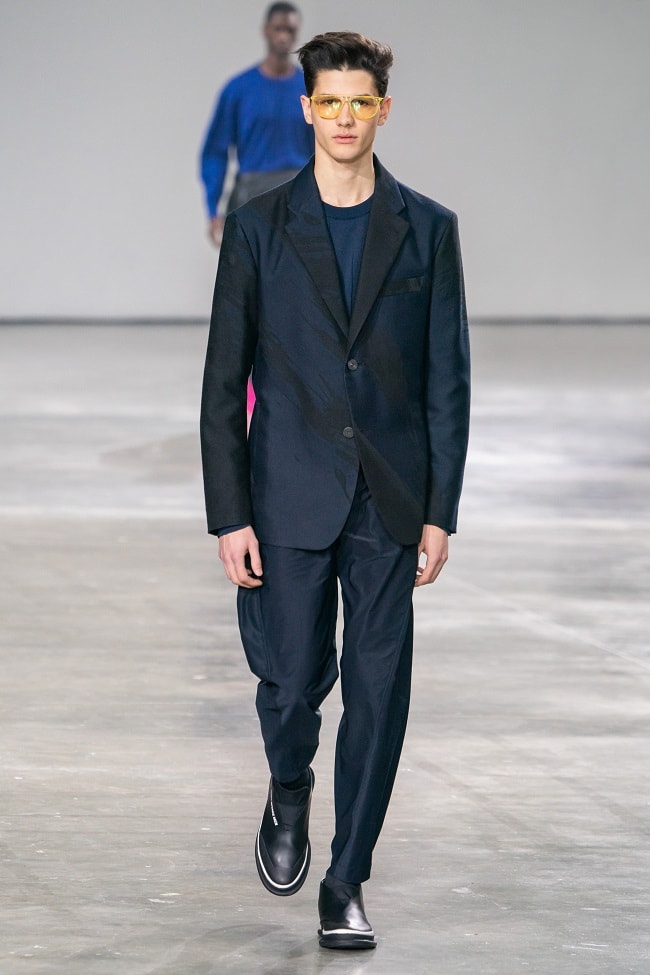 They’re similar in many regards, not the least of which is their twill-based construction. They’re not as thick as traditional Tweed – although they bring a similar level of texture – but beat plenty of cotton-based fabrics. Understand that while wool may have primarily been used in the past, today’s fabric blends mix it with cotton, polyester, or other fibers. Before you buy, try it on to check out the thickness, strength, and feel.


That ‘70s revival brought out all the corduroy lovers, and today, it’s a sturdier, less foppish take on the velvet suit that makes use of its workwear origins. But, unless you’re playing things strictly casual, keep the wales – the thickness of the fabric’s ridges – on the narrower side. And, considering its novelty implications, stick with a classic shade – think navy, grey, or beige – rather than something off the beaten path. 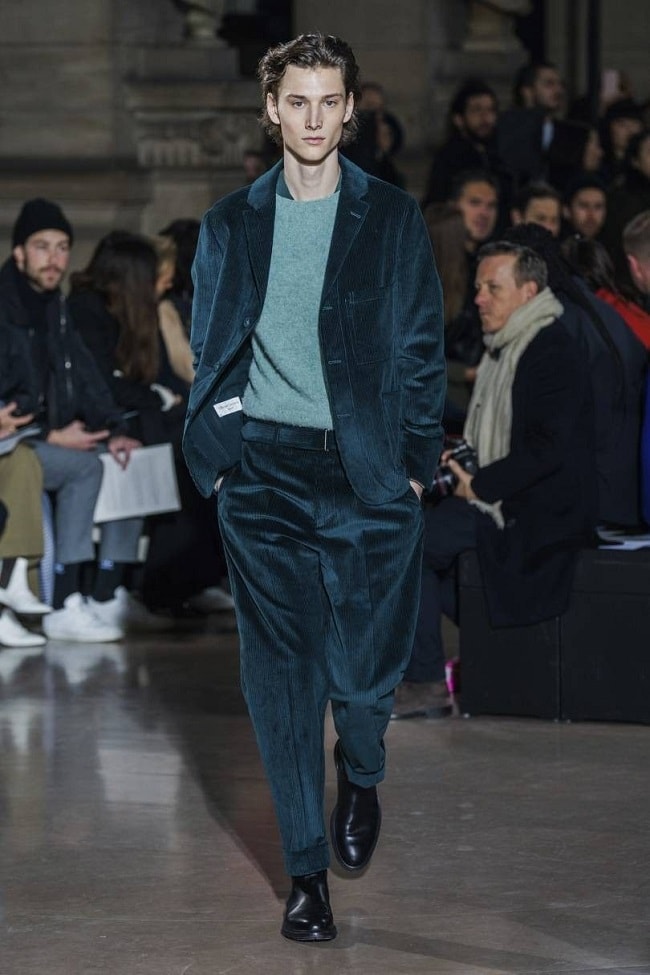 Considering the price, you likely won’t find full-on cashmere suits at every suiting retailer. Yet, if you’re seeking out a luxurious blazer to pair with your dress trousers, cashmere takes all of wool’s noteworthy qualities and raises them up a notch. The result, in turn, feels silky soft without any coarseness and offers a higher degree of warmth for its weight.

Keep the mint green, flamingo pink, and buttercup yellow toward the back of your wardrobe this season – unless a Miami vacation is on your radar. Rather, for whichever fabric you choose, the colour needs to mimic the season’s dark, dour character without seeming too morose. Between summer’s ice cream-coloured shades and black’s back-from-a-funeral implications, most winter suits walk a traditional path – think navy, charcoal, dark brown, or camel – although more modern iterations throw in a dash of red, forest green, or purple, resulting in a plum, burgundy, mossy, or oxblood hue that’s impactful, but not brash. 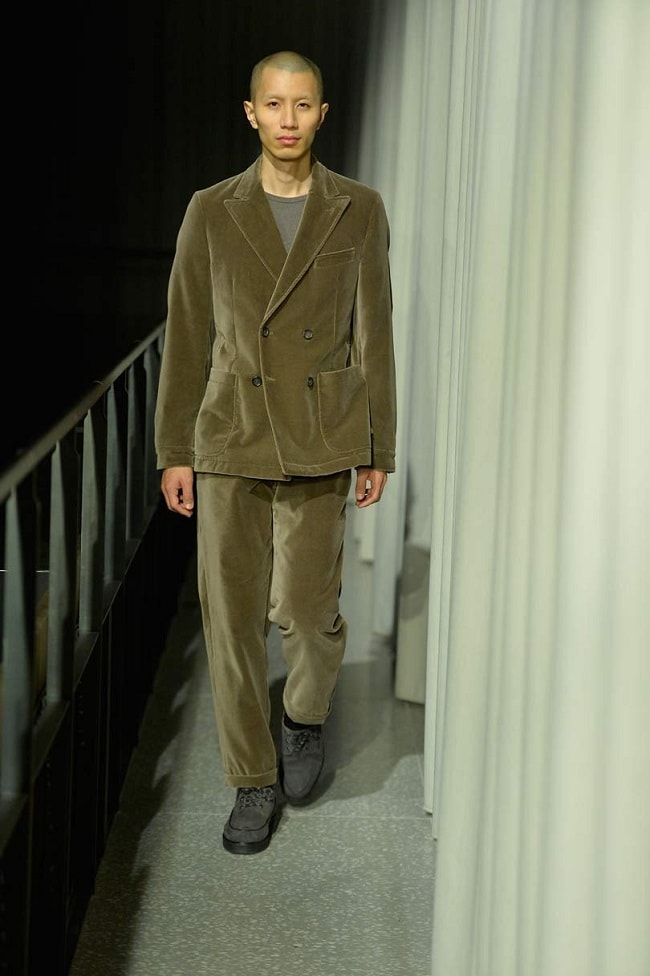 It Needs to Layer Well

As plenty of office workers know, that “just right” sensation between the morning commute, cubicles, and client meetings is always fleeting. What feels perfectly good one place becomes too thin or too heavy in another environment. As such, layering defines autumn and winter dress codes, and your suit is no exception.
However, stuffing a suit below an overcoat or wearing too many garments underneath undermines your appearance, resulting in wrinkles or a bulky, puffed-up look. Instead, your suit needs to be streamlined enough that a trench or similar overcoat will slide right on top – no struggling with the sleeves. Similarly, its fabric needs enough body that undergarments – your usuals or thin base layers – and a shirt naturally fit below, without any awkwardness.