With recent headlines frequently dominated by China-US trade negotiations, it’s worth remembering that the long-standing commercial relationship between the world’s two biggest economies all started with an epic sailing voyage by the Empress of China. 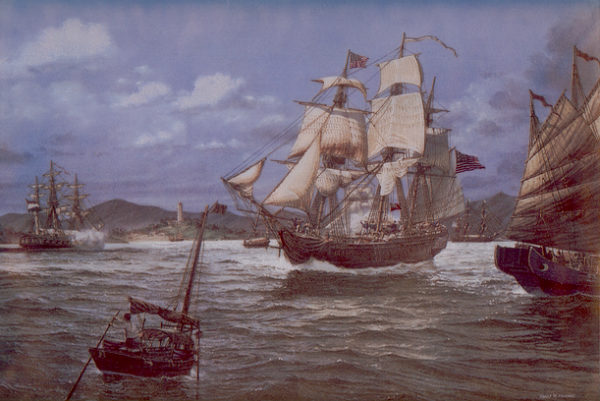 In 1784, the Empress of China became the first American ship to sail for China; Photos: Hong Kong Maritime Museum

When the Empress of China became the first American ship to sail for China in 1784, it was the modern-day equivalent of a space mission to Mars. It required hand-picked people, months of planning, lots of capital investment and the most advanced technology.

The three-masted sailing vessel slipped from New York harbour on the freezing-cold morning of February 22, coinciding with George Washington’s birthday. As the ship marked its departure with a 13-gun salute in the East River, she was about to embark on a six-month, 18,000nm passage from New York to Canton (now Guangzhou).

It was a private commercial mission but it also carried the hopes of a newly independent nation, desperate to establish new trading links with China. The daring venture was backed by America’s prominent founding fathers like wealthy financier William Morris.

“The backer of the Empress of China were all the signatories of the Independence agreement, so they knew what  they wanted. This was a private enterprise  but a national priority,” says Libby Chan Lai-pik, Assistant Director of the Hong Kong Maritime Museum (Curatorial and Collections).

THE DRAGON AND THE EAGLE

The museum features that historic first voyage in its special exhibition about the formative days of China-US trade called The Dragon and The Eagle: American Traders in China, A Century of Trade from 1784 to 1900.

At 104ft in length and with a 28ft beam, the ship commanded by Captain John Green was slightly smaller than the Star Ferries that traverse Hong Kong’s harbour but its passage was significantly more challenging. 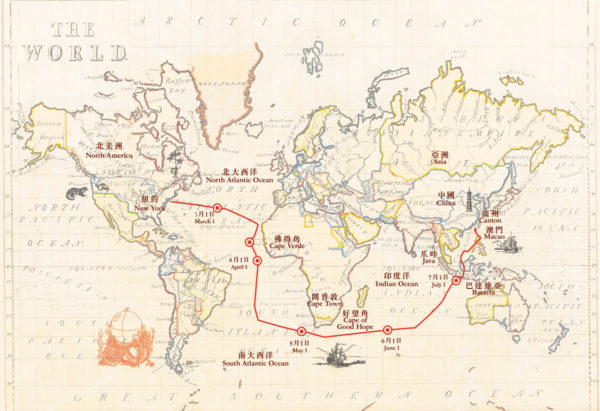 Passage of the Empress of China from New York to Canton, February 22-August 28, 1784

Without the benefit of GPS, modern telecommunications or even a reliably accurate chart, the Captain and 42-man crew of the Empress of China embarked on its ambitious mission with only the wind as a means of propulsion and with little hope of rescue should disaster occur.

Green, then 46, was well qualified for the job. The giant, highly- respected Irish sea dog was a veteran of the War of Independence against imperial Britain and had been made a prisoner of war for his efforts.

The large hardwood sea chest he took with him for the voyage is one of the exhibits at the Hong Kong Maritime Museum, as is the original sea letter from the US Congress, authorising the voyage.

The ship was loaded with a cargo of ginseng, lead, Spanish silver coins and woollen cloth. It was notoriously difficult to source goods that were in demand in a largely self-sufficient China, but the Americans had done their market research carefully.

In charge of all commercial transactions including the buying and selling of the ship’s cargo was a 29-year-old US army artillery officer decorated for gallantry in the War of Independence and appointed as the ship’s so-called ‘Supercargo’.

Samuel Shaw from Boston had very little commercial experience, no knowledge of Asia, no training in negotiating and no foreign language skills. He went on to be the first US Consul to Canton.

While the modern deals being hammered out by trade experts and politicians in Washington DC and Beijing will dictate the future of a trade relationship totalling over US$700 billion, in 1784, as Shaw waved goodbye to the cheering crowds lining the East River, the total trade figure between the two nations was zero. 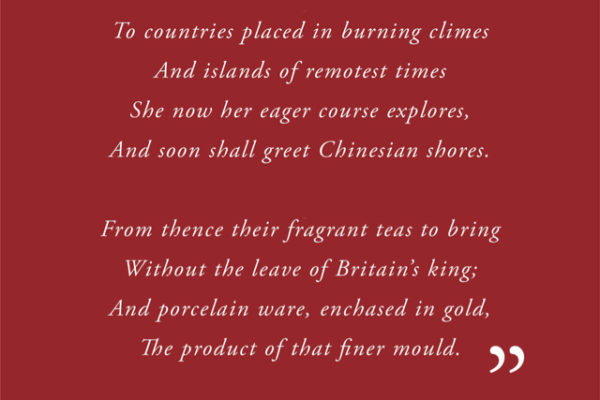 It was not a non-stop voyage. That would have been impossible due to the need for fresh food and water. The first port of call was the Cape Verde islands, followed by a challenging 9,000nm passage south to round the Cape of Good Hope, then northeast across the Indian Ocean.

Almost five months after leaving New York, they sighted Java Head in Indonesia and anchored in the Sunda Straits near modern-day Jakarta, where natives in canoes offered fish, fowl, turtles, fruit and coconuts for sale.

By chance, the experienced Captain of a neighbouring French ship embarked in the China trade offered to accompany Empress of China to the China coast. Captain Green was not a nervous skipper by any means, but he accepted the offer with alacrity.

He knew the waters off the Java Sea were pirate infested and although the ship carried four six-pounder guns, Green knew from hard-bitten experience that there was additional safety in numbers.

It took a further month to reach Macau in the Pearl River estuary and embark a Chinese pilot before sailing for the Whampoa anchorage, some 12 miles downstream from Canton, on August 23. On anchoring, the American flag was raised in Chinese waters for the first time.

Shaw, Green and the crew of the Empress of China enjoyed a warm welcome in Canton where they were referred to as the “new people” or the “flowery flag devils”, a reference to the stars-and-stripes flag.

According to records from the time, Chinese merchants found the new American traders honest and easy to deal with. They seemed less stuffy and patronising than their European counterparts, with less heavy-handed methods of negotiating. Their light touch and popularity smoothed the passage for hundreds of American ships and merchants after them.

“The Chinese were very indulgent towards us,” wrote Shaw in his journal. 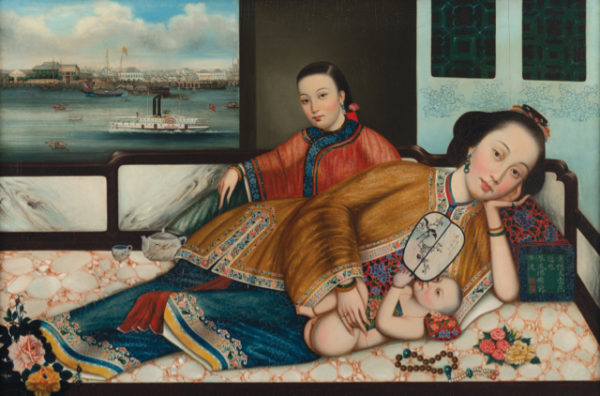 The Empress of China left Canton on December 28, 1784, and arrived in New York on May 11, 1785. She carried 800 chests of tea, 20,000 pairs of nankeen trousers and a huge quantity of porcelain. Newspapers announced her return and crowds of excited New Yorkers lined the quayside to welcome the ship home.

The sale of Chinese export goods to Americans was established as a profitable form of business at a time when the country’s silks, porcelain and art were considered the height of luxury, sought by Presidents, and tea was considered an essential drink for American households.

All told, the voyage earned a 25 percent return on investment. It was less than forecast, but the voyage of the Empress of China was much more than a profit-making venture. It laid the foundation of all future US-China trade.

Later the Americans resorted to the illegal sale of opium to China, which soured a commercial relationship that has endured many highs and lows since that first epic voyage.