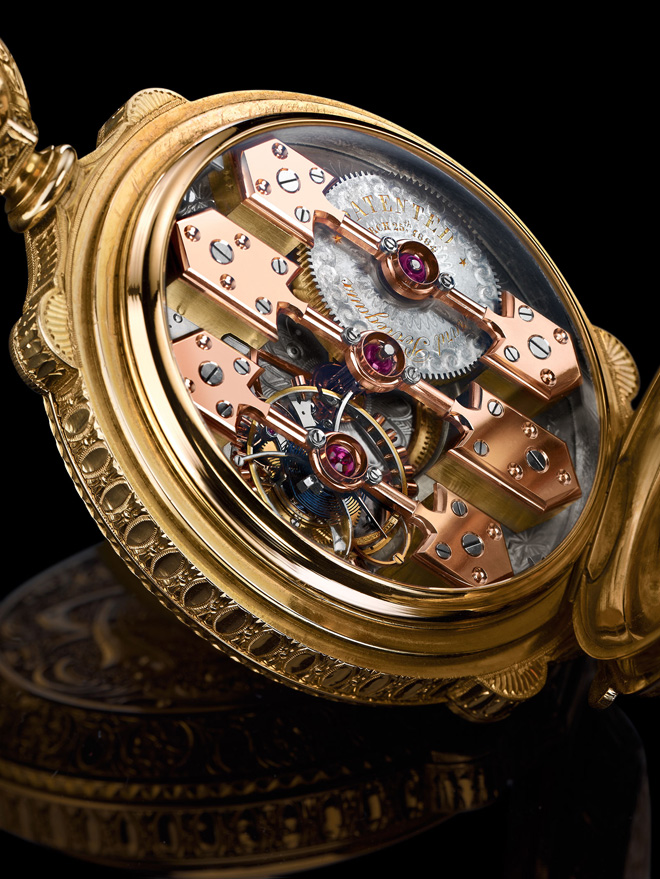 In 1889, the Jury of the Paris Universal Exhibition awarded a gold medal to Girard-Perregaux for a masterpiece. It has been designed by the three recognizable gold bridges and has been tried and tested. The watch was eventually named “The Esmeralda”, after the Mexican retailer who famously sold the La Chaux-de-Fonds masterpiece. Prodigiously, the gold medal winning masterpiece has become the founding cornerstone for technical provenance and aesthetic codes which has always been associated with Girard-Perregaux.

Thus on their 225th anniversary, Girard-Perregaux unveiled their wristworn SIHH 2018 Esmeralda Tourbillon, a contemporary interpretation of that legendary “La Esmeralda” Tourbillon with Three Gold Bridges pocket watch. This is the origin of the La Lime Manufacture and with it, the modern incarnation of that historic legend – the Girard-Perregaux The Esmeralda Tourbillon “to Secret” with a completely hand-engraved, hunter-style case reminiscent of that ancestral gold medal winner.

While the whirlwind is often associated with its inventor, it is important to note that Constant Girard, co-founder of Girard-Perregaux was himself, such a great artisan that his tourbillon, equal parts art and mechanical science is recognized by horological scholars as a unique creation – that while famed Girard-Perregaux three-bridges whirlwind does follow traditional horological conventions, where it leaves the essence of Ernest Guinand’s (famed Le Locle master watchmaker) and Auguste Frether’s (tourbillon specialist) genius really shines by their distinctive A-shaped frames, Girard-Perregaux’s tourbillons could be fitted with various escapements, but mostly fitted with pivoted detentements.

The “crystal box” triple sapphire which gives a panoramic view of the Girard-Perregaux The Esmeralda Tourbillon “to Secret” caliber. Witness the exquisite finishing on the components – Photography: Jonathan Ho

In designing the benchmark caliber with a unique layout, three arrow-head parallel bridges support the moving parts of the movement, Constant Girard-Perregaux’s act of artistry is perhaps the first expression of restrained horological pompousness, but in one stroke (gold three), he pioneered the concept of dramatising mechanics, what was once a purely technical mechanism. In 1867, this “minimalist” (but really symmetrically ordered) layout won its first timekeeping award from the Neuchâtel Observatory; patent filed on March 25, 1884, it would not be undefined for the first time.

All 80 components of the famous lyre-shaped tourbillon carriage are likewise hand-polished, and in addition to the exquisitely identifiable Girard-Perregaux tourbillon, the other components are entirely hand-finished. The upper handplate is hand-engraved to highlight the radiant guilloche pattern; the barrel is satin-brushed, chamfered and also engraved with a spiral motif; more mainplate adorned with a Côtes de Genève motif and concentric circular graining. Finally, even the plate bearing the movement is straight-grained with hand-polished angles.

The Secret in The Esmeralda Tourbillon “In Secret”

The La Esmeralda Tourbillon “at Secret” draws its namesake from an age-old horological innovation – the hunter or “secret” case-back, a cover protecting the back of the watch, promoting a special sense of privileged intimacy with the wearer; while the interior is engraved with the inscriptions “Tourbillon” and “La Chaux-de-Fonds”, leaving enough space for personalization by the future owner.

The hand-engraved pink gold case is the work of approximately 200 hours of patience and unwavering concentration: horse, flowers and “oves” motifs which made the 1889 heritage pocket watch such an iconoclast. Of special note: the midfielder bears cuts which are identical to its celebrated ancestor.

Hands on the latest Esmeralda

The “to Secret” is the latest The Esmeralda Tourbillon to bear the name and is essentially the wristwatch incarnation of the original. Its magnificence is amplified by the 44mm 18k pink gold canvas which holds the cuts of a single artisan. Esmeralda Tourbillon, where it excels is how, it’s a novelty. Every inch of the unique The Esmeralda “to Secret” is covered with the emblematic patterns of the original, elevating an otherwise exemplary work of high horology in the rare air of sculptural mechanics.

An automatic GP09400-0014 caliber with 60 hours power reserve is wound by camouflaged micro-rotor, ingeniously hidden under the barrel and in essence (given its position), directly winding the handspring rather than transmitting the “turns / winds” via gear train as in other automatic movements.

Movement architecture follows Girard-Perregaux conventions where each iconic bridge holds aloft the barrel at 12, the gear train and mainwheel with hours and minute hands; the presence of this unmistakable timepiece is greatly enhanced by the provision of a triple crystal sapphire crystal

Girard-Perregaux The Esmeralda Tourbillon “at Secret” Price and Specs