Rolex can do no wrong. We are currently experience peak vintage Rolex demand and perceptually speaking, it would seem entirely reasonable that here, at the precipice of watch perfection by way of cerachrom bezels, parachrom bleu balance brings and Rolex Rolesor, one would seek meaning in the poetry of time’s eternal metaphysically and material impermanence as embodied in that literal contradiction of a mechanical timepiece – something created for immortality but held hostage to temporal erosion. But what if, we could roll time back to an age where we stood at the crossroads, looking forward at a new age of nascent material sciences and backwards towards a time when we were wildly innovative with available resources? That era would probably be the 1980s, best exemplified (horologically speaking) by the Rolex Explorer II with Cream Dial in Stainless Steel. 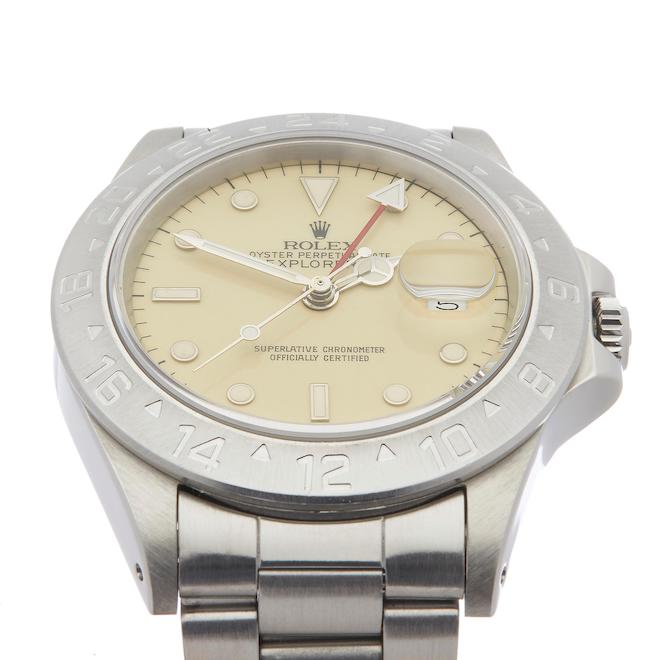 Yes, the GMT Explorer II ref. 16550 was that quintessential product of the 1980s, (17 March 1987 to be precise), created during that confluence of material and technical progression; to use an analogy – if our present period is represented by Captain Picard’s Star Trek Next Generation’s “materially utopian” future, the 80s was Kirk’s Original Star Trek along with all the experimental antics and attempts of the era – Starships were a little less perfect and more prone to quirks – in essence a period of evolutionary flux. 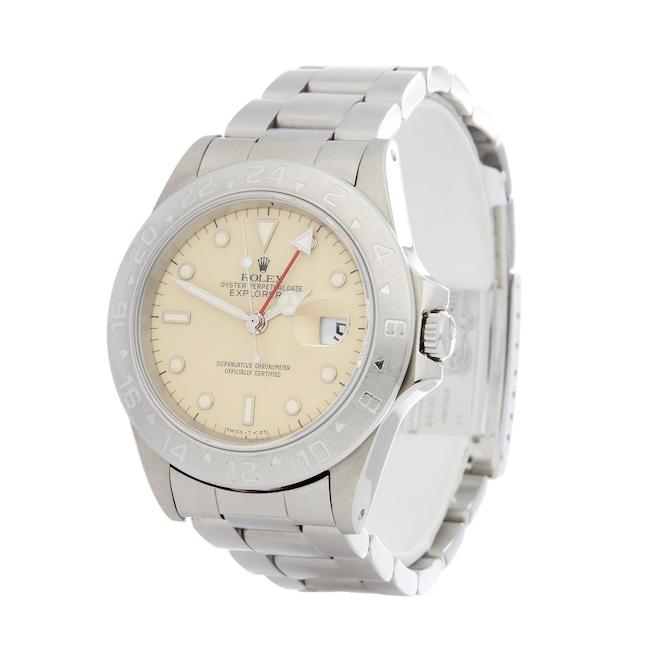 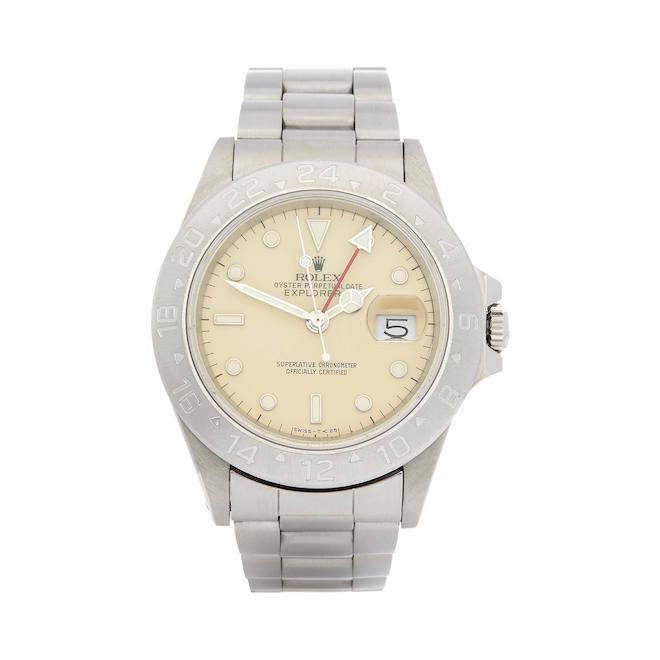 To our modern perspective, the Rolex GMT Explorer II, evolving from the Ref. 1655 to the 16550, has become a binary of black or white dials framed with a steel bezel. Obviously speaking, this is a cream dial Rolex Explorer II from circa 1987 therein which lies its charm and appeal. In a literal dichotomy of black or white dial vintage and modern GMT Explorer IIs, this Rolex Explorer II with Cream Dial is a “black swan’ and hence a rarity. Combined recent demand for faux-patina, bronze and salmon coloured dials, the provenance and authenticity of a cream dial Rolex GMT Explorer II is a little hard to beat although the asking price might give one pause.

That said, its asking price at $33,500 is not altogether unreasonable, it’s hard to find a 1980s cream dial Explorer II in such good condition. According to 1stDibs, this cream dial ref. 16550 comes “Complete With: Box, Calendar Card, Swing Tags, Rolex Document Wallet, Service Guarantee Dated 29th March 2011 & Guarantee”. That said, LUXUO and World of Watches makes no claims or veracity as to whether the vintage Rolex GMT Explorer II has been refinished. Near as we can tell, the timepiece is still in relative good shape – the bevels on the lugs are still present but not exactly ‘crisp’, the brushed finish is still sharp, the mid case is still well finished and holds its shine while the Oyster-style bracelet with easy release clasp looks without significant wear (but there are markings on two mid links – whether from dirt or abrasion it’s hard to tell) and almost no stretching – it almost looks new, which again, is another discussion between the two camps of vintage Rolex collectors, some preferring a more worn-in look and others preferring a more “new old stock” appearance. Suffice it to say, the biggest concern would be replica components to make the cream dial Role GMT Explorer II into a more “in-demand” reference but as mentioned, with full box and papers (and even its swing tags), there are people who have paid more money on a similar reference with more questionable provenance. Rolex only produced the  ref.16550 from 1985 to 1989, making it a rare “transitional” model.