Colour Pop Candy Castle 10-Pan Pressed Powder Shadow Palette includes two shimmer eyeshadows and eight shades more matte shades, though most had larger sparkle strewn through the more matte base. The sparkly matte finish, which might be pretty in the pan, doesn’t translate well, and ColourPop’s take on it is no exception.

Best case scenario, the sparkles disappear to parts unknown before you can apply it to the eye area, but worse case scenario, you have larger sparkle particles in places you didn’t want (fallout or just dispersed by blending up into the crease or wherever you didn’t want them to be) and then fallout later on. There are occasions where you’ll fine shimmer in otherwise matte finish eyeshadows, but the shimmer will be very fine and seem to help with blending.

The palette has a weird range of depth, which made hard to get a cohesive look out of it and actually use shades like Cravings, Rainbow Trail, or Candy Land. Shades like King Kandy, Gramma Nut, and Candy Crush ran together and muddied more readily. Gloppy has the most depth in the palette, but it’s so much darker than other shades and was difficult to blend with shades like Cravings and Rainbow Trail due to the contrast in undertone and how much deeper it was.

Candy Land is a light pink with m oderate, warm undertones and flecks of silver sparkle over a matte finish. It had semi-opaque pigmentation with a moderately powdery texture that was prone to sheering out and dropping fallout–both in the form of the pink powder base as well as the larger sparkles.

It was difficult to use without a tacky white base, as the color sort of seemed to get “eaten” by my lids when I tried using it over bare skin (which is normal protocol!). This shade showed signs of fading after six hours of wear–from what I could tell.

Sugar High is a soft, golden white with warm undertones and a metallic sheen. It seemed like a Super Shock Shadow to me as it was lightly creamy and more emollient, unlike the brand’s typical powder eyeshadow. It had semi-opaque coverage that did not build up, as I found the slip resulted in the product getting pushed around rather than building up, so the end result (from attempting to build up coverage) was thick and uneven. There were no signs of creasing or fading after nine hours of wear.

Cravings is a pale yellow with subtle, warm undertones and a matte finish larger sparkle over top. The sparkle felt like a random smattering of sparkle, and thankfully, it didn’t seem to translate to the lid (because it would have just resulted in fallout over time instead!).

It was moderately powdery, which resulted in some powder fallout when blended, and the semi-opaque coverage was hard to keep there (or to build it up) without a tacky, white base under it. This shade lasted for six hours before fading visibly.

King Kandy is a medium, true coral with moderate, warm undertones–it was well-balanced between pink and orange–paired with a matte finish. It had opaque color coverage in a single layer with a smooth, velvety texture that wasn’t too powdery nor too firmly pressed into the pan. This shade stayed on nicely for eight hours before fading noticeably.

Lord Licorice is a very, very light brown with warm, muted undertones and a matte finish. The eyeshadow had opaque pigmentation in a single pass, which adhered well to bare skin and blended out with ease. The texture was lightly powdery, but it wasn’t prone to fallout or sheering out too readily. It wore well for eight hours on me before fading a bit.

Gramma Nutt is a medium-dark, pink-coral with moderate, warm undertones and a mostly matte finish. It had excellent pigmentation with a soft, moderately powdery texture, though it only sheered out a bit during application and could be built back up. It lasted well for seven and a half hours before fading noticeably. 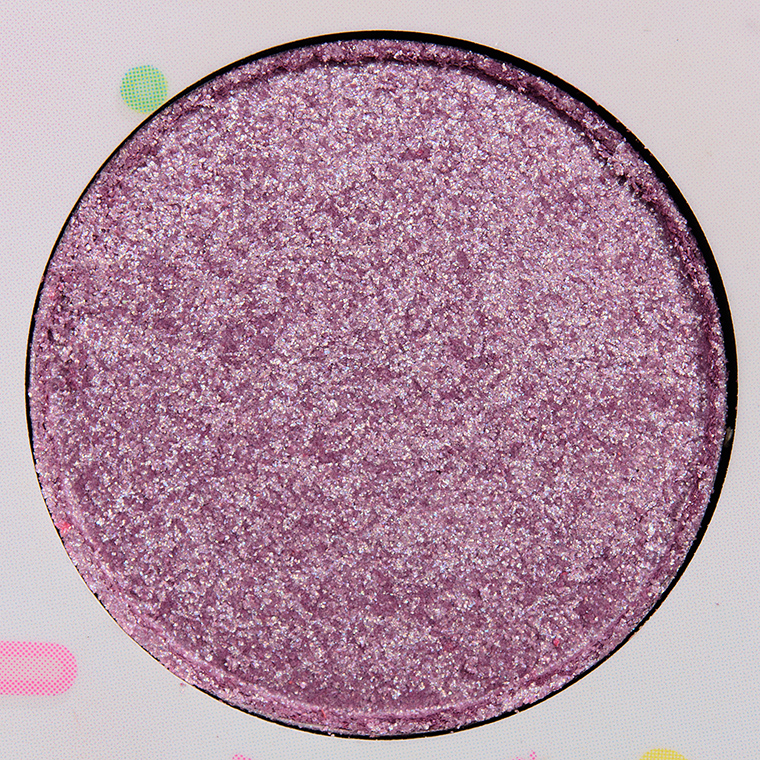 Plumpy is a brighter, medium lavender with subtle, warmer pink undertones paired with flecks of pink and gold sparkle that gave it a more metallic finish. The consistency was slightly drier and felt more loosely-pressed into the pan, so there was some fallout if I wasn’t careful to press/pat it into place or apply it with a fingertip. It had nearly opaque color payoff that stayed on decently for seven and a half hours on me.

Rainbow Trail is a light-medium, green-leaning aqua with subtle, warm undertones and flecks of random, silver sparkles over a more matte finish. It had good color payoff that was prone to sheering out when applied, as the texture was quite powdery and had some fallout as a result.

The sparkles did not translate much, but the few that did dispersed readily, which resulted in those random sparkles going to other areas than initially placed. This shade wore decently for six and a half hours before fading noticeably.

Candy Crush is a dusky, muted coral with strong, warm undertones and a matte finish larger, silver sparkle over top. The texture was soft, moderately powdery, though it wasn’t prone to sheering out too readily.

Some of the sparkles translate to the lid area, but then they resulted in fallout over time and some dispersion to where I did not want it as they blended easily away from the base color. It had good pigmentation that lasted well for eight hours but had fallout over time.

Gloppy is a deep, red-toned brown with subtle, warm undertones and finer, multi-colored sparkle over a matte finish. There was enough sparkle that most of it seemed to translate to my lid, and while it didn’t contribute to much fallout during the initial application, the sparkles distributed readily when I tried to place and blend out the eyeshadow, so it made it hard to keep the areas near it truly matte (if desired).

The texture was soft, slightly powdery and yielded opaque coverage. This shade stayed on decently for eight hours with slight fallout over time.

10 Fall Eyeshadow Palettes That Are Worth the Hype

Quote of the Day
John Lubbock
What we see depends mainly on what we look for.
Ashburn