Chris Brown was the subject of debate this week after a 24-year-old girl accused the Grammy-winning artist and two different males of rape in Paris, France. Shortly after being detained, Brown, his bodyguard, and one other unnamed man was launched on their very own recognizance with none fees or bail. Brown is now countersuing his accuser for defamation, confirmed by his lawyer Raphaël Chiche in a tweet on Thursday (Jan. 24), noting the town’s public prosecutor filed a grievance in opposition to Brown’s nameless accuser “for slanderous denunciation” of his consumer.

Days after his launch, Brown was seen capturing a music video for a track reportedly known as “Back to Love.”

To hold the momentum going, Brown items his followers the long-awaited single, “Who Dis,” a track that sees him crooning about his relationship affairs. His Team Breezy followers have been requesting the observe for 3 years after being teased on-line.

“Attention, my baby’s comin’ over / I’ma need everyone to go,” Brown sings about his dishonest methods. “Take what you need and get to steppin’ / No, you don’t need to wait out / Traffic, I hear it’s kinda crazy / More time for me to clean up / She might think there is something shady.”

Brown shared the track with the caption, “#TeamBreezy….you asked. Here you go #WhoDis.” 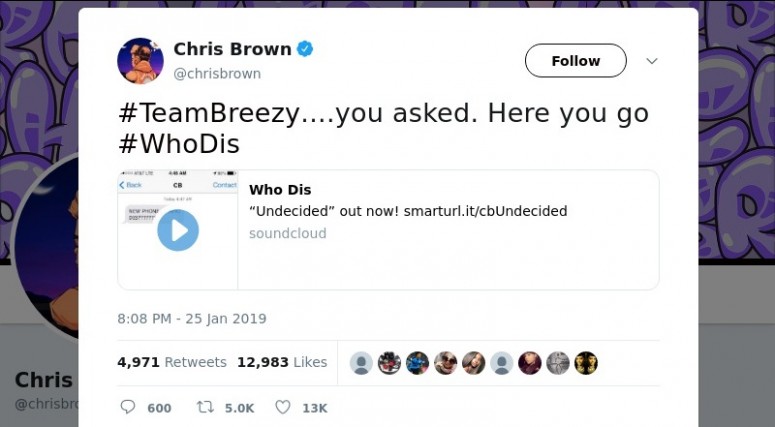 Listen to “Who Dis” beneath: