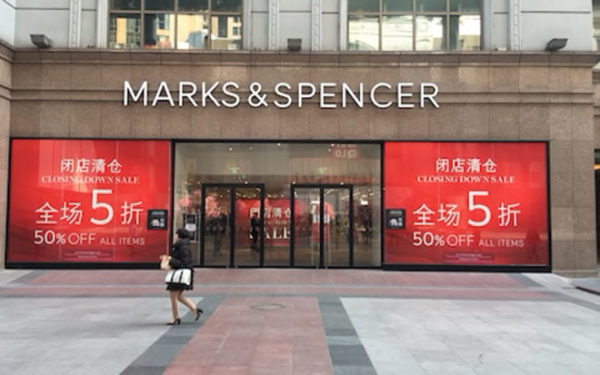 Marks & Spencer conducted a closing down sale as they were exiting China.

With the unsettling prescience that e-commerce is accelerating the fashion cycle, retailers are scrambling to keep up with the burgeoning Chinese middle-class’s capricious demands for fast fashion—the seemingly impossible trinity of immediacy, cultural adeptness and economy. The Goliaths of the fashion industry are increasingly subverted by Davids—international mid-market retailers face stiff competition from independent domestic e-commerce retailers; the Davids are consistently outwitting each other by the sheer fact that fashion wholesalers exist in the thousands. According to Bain Consulting, the overall luxury market grew 5% in 2018, with an estimated €1.2 trillion globally, but in the positive numbers hides a more troubling statistic – most of the revenues are generated by slightly more than 100 out of the 500 companies and brands studied while 30% the bottom 20% of the list lost money, destroying 34% of the profits according to McKinsey & Company.

“Slightly more than 20% of the 500 companies studied are accounting for 97% of the profits (among them, Inditex (Zara) and H&M, Nike and Adidas, Hermes and the luxury conglomerates LVMH, Kering and Richemont)” – McKinsey & Company

According to McKinsey & Company, 2017 signalled the end of an era where the West will no longer held sway as global stronghold for fashion sales. The industry passed an important tipping point in 2018 when, for the first time, more than half of apparel and footwear sales originated outside of Europe and North America, with main sources of growth are emerging market countries across Asia-Pacific, and other regions; in part, driven by omni-channel competition and e-Commerce retail. In terms of revenue, the top performing brands and companies also share another point in common according to Gartner’s research – high “Digital IQ”:

This paradigm shift, further fuelled by Alibaba’s intention to double transaction volumes on its Tmall service, tilts the power differential in favour of independent retailers against the global hegemony of western fashion houses. Brands like Topshop, Marks and Spencer and Forever 21 scaled down their operations as they are losing their foothold to Alibaba and JD, which has a 70% combined market share in China. 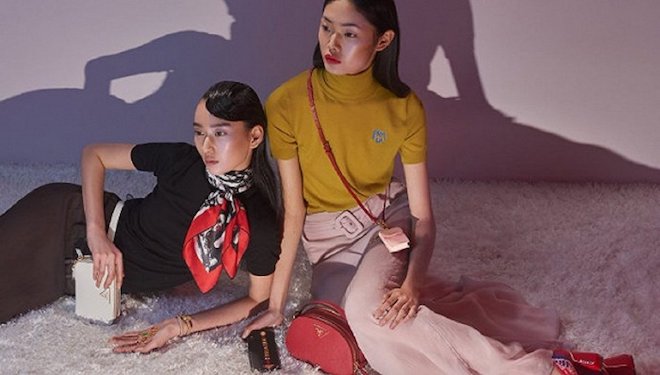 In fact, McKinsey & Company shows that on average, consumers in Asia spend at least eight hours a day online; from social media to video streaming and shopping amongst other things. The modern shopper’s journey is no longer a linear one,  digital channels and content have evolved into a complex journey across online and offline touchpoints.

Digital-first e-commerce companies from Amazon to Zappos, and Alibaba to Net-a-Porter are continuing to raise the bar to provide not just an even-more-premium experience but perfect functionality and immediacy of access. Case in point, Farfetch and Gucci offers delivery in selected cities from store to home in 90 minutes or less. 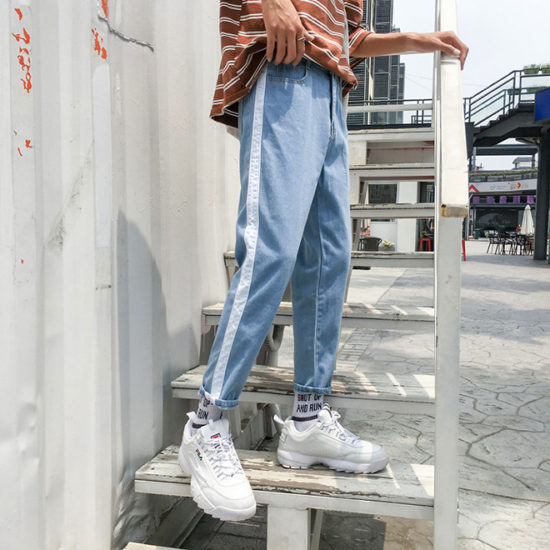 A picture of ‘Boyfriend jeans’ that is deliberately made to look baggy. Based on Taobao’s prediction, this is one of the trendy items for 2018.

In a bid to accommodate consumers’ demand for fast fashion, Chinese search engines like Taobao predict fashion trends from its search data of 601 million active users. Then, ingenious domestic retailers engage ‘micro-studios’— sewing shops that handle small unique orders based off real-time consumer feedback— to curate a cornucopia of styles that appeals to the mercurial consumers. As the production cycle is materialised domestically, new products can be delivered in a matter of days since its ideation.

“Luxury ateliers like Hermes are reporting 17% growth in China”

Pundits dub the Chinese shopping behaviour as the ‘hour-glass’ model, where sales are bifurcated to either the absolute top or bottom end of the market. Evidentially, despite the demise of mid-market brands like Forever 21, luxury ateliers like Hermes are still reporting an impressive 17% growth in China in 2018. 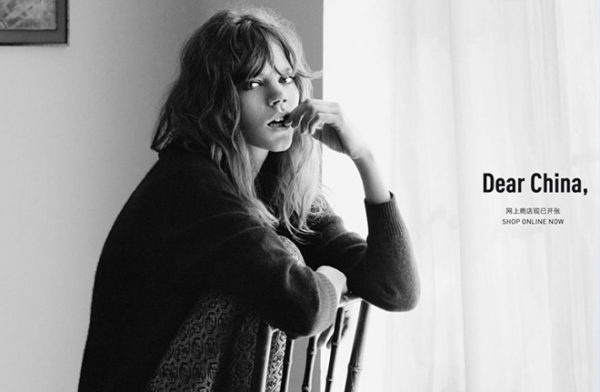 Interestingly, ZARA, with 190 stores in China, remains a front runner in middle-class fashion retailing. Their secret is none other than strategic marketing—working with Tmall to capture the e-commerce market while requalifying their brand as a focused atelier to cater to the middle-class refined lot. No wonder, the Amancio Ortega, founder of Inditex Fashion Group, is one of the richest man on Earth (Net worth: 66.4 billion).

It is important to note that the riches and westernisation of Shanghai are not representative of China, much of china is far from affluent. Save for the exceptional, cheaper mid/low-tier local merchandises are often preferred over comparably polished western wares. 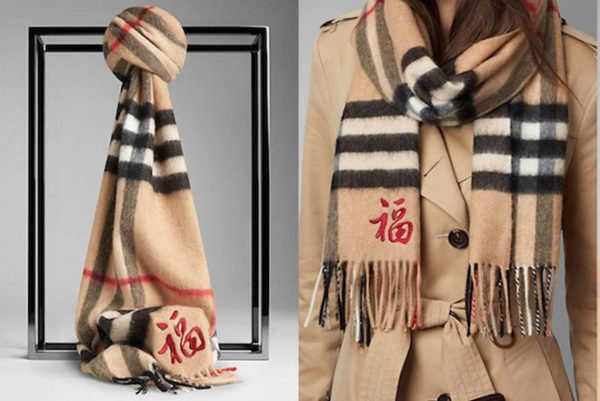 The Burberry’s attempt at a cultural motif.

South East Asia, a lustrous frontier for e-commerce, could be the next spring with the entrance of Amazon, Alibaba and several regional e-commerce giants. Yet, retailers that failed in China are not learning their lessons; they remain reticent about integrating their merchandise to the local heritage, demography and physique. At best, Burberry frivolously embroiled the Chinese character ‘福’ ( ‘fu’ which means prosperity) upright on their 2015 special edition Chinese New Year scarf, a basic cultural faux pas that ushered an embarrassing bout of lampoons on Weibo. At the extreme end, there’s the recent mis-adventure that was Dolce & Gabbana. That said, due its conflicted narratives and multicultural demographics, it is foreseeably more challenging to traverse Southeast Asia than China. 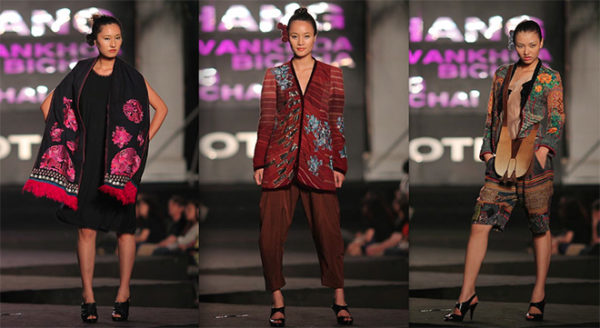 In Southeast Asia, hardwired local tastes are tethered by their traditions and stretched by global fashion to calibrate a distinctive style that varies across the region. Beyond the opulence of Singapore, many countries are at different levels of development, which will cultivate different preferences. It is then the tall order of designers to navigate the subtleties subjected by the confluence of factors. 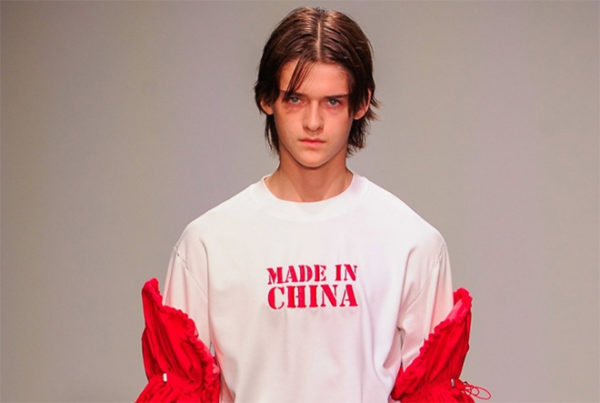 “Made in Europe” label may eventually lose its charm with middle class consumers in Asia as they gradually become more affluent, which heightens national pride.

We need to understand that the middle class is a complicated lot whose behaviour cannot be linearly extrapolated from classical economic theory. While years of inveterate impecuniosity has resulted in a god-like worship of western brands, but beyond level of sophistication, the middle class will support comparable local brands to assert nationalism and reject cultural imperialism. In pursuant to the Asian middle class’s hyper consumerism, the elusive panacea for mid-market retailers is to breach the forth wall from the e-commerce sphere by being: accessible and au courant with the local contexts.

Across all industries, signs point to a future where the adoption of disruptive technologies like advanced robotics, big data, and artificial intelligence is accelerating, with disruptions already hitting some sectors, the fashion and luxury industry will not be an exception. With increased digital cross-border trade, anyone who excels in their field could in theory become a champion not just in China but globally.