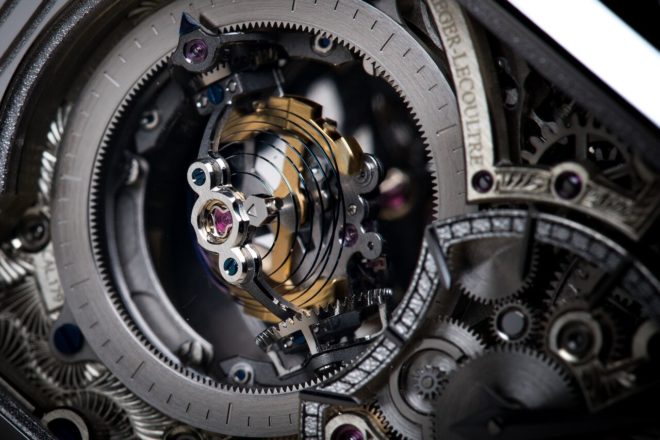 In their history, Jaeger-LeCoultre has presented five gyrotourbillons: the first in 2004 – Master Gyrotourbillon 1, a follow up second variant in 2008 encased in their brand icon – the Reverso Gyrotourbillon 2 and in 2013, their Master Grande Tradition Gyrotourbillon 3 Jubilee. Their fourth,  a truly wearable Gyrotourbillon in a slimmer brand signature – the 2016 Reverso Tribute Gyrotourbillon – was recognition that high horology’s prime directive is a sacrosanct recognition that a watch is only as precise as the user who finds it comfortable enough to use as a timekeeping instrument on a daily basis.

Consider the average precision of a traditional tourbillon with rates good enough to fall within COSC criteria of -4/+6 seconds a day; comparatively, the Gyrotourbillon is a technical marvel: a multi-axis tourbillon comprising two cages inclined at different angles, spinning a blued spherical balance spring at different speeds in opposite directions with a vaunted precision deviating by a maximum of -1/+1 second a day. 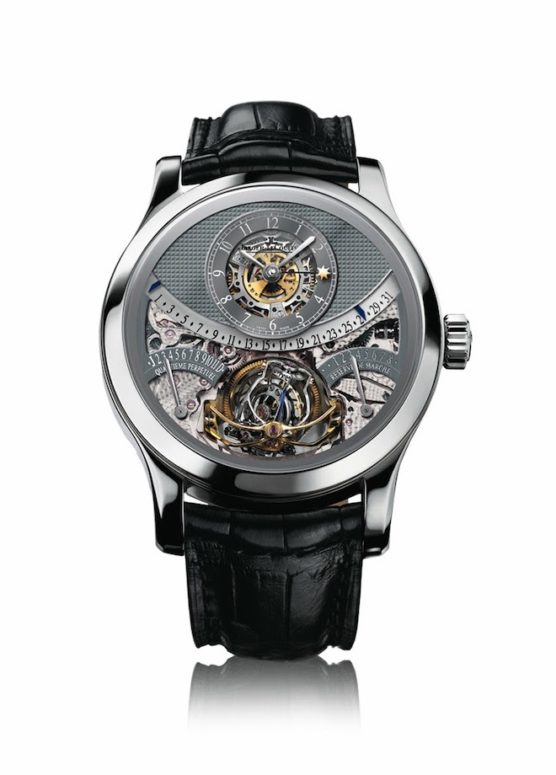 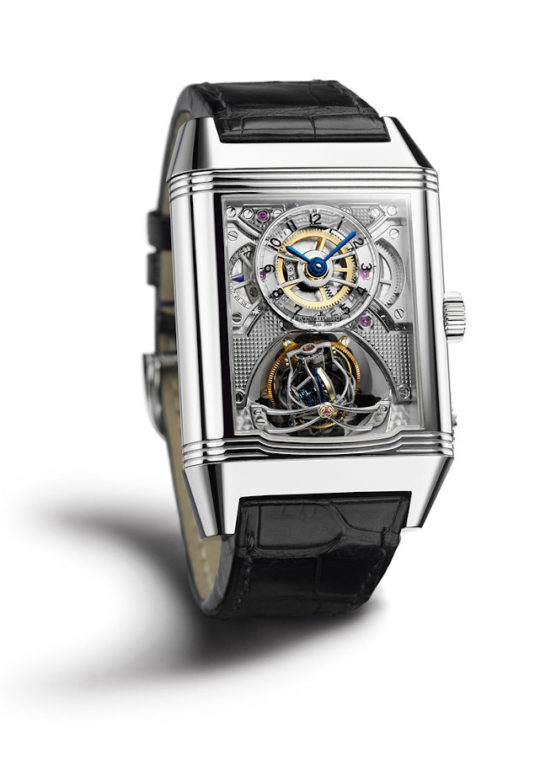 Hence, further advancing the art of multi-axis tourbillons, the Grande Maison presented their fifth (and at the time, celebrated as a magnum opus in arts of precision), the Master Grande Tradition Gyrotourbillon Westminster Perpétuel which debuted in 2019, featuring a gyroscopic tourbillon that was significantly smaller than those preceding Gyrotourbillon timepieces presented during the last 15 years. In watchmaking, the act of creating a smaller calibre by reducing the size of its corresponding components, also reduces its error tolerance, hence successful miniaturisation efforts are highly valued and complications unto itself.

It’s an adventure 30 years in the making, considering that in the 90s, Jaeger-LeCoultre’s largest timepiece was only 41.5mm and the meant that proportionally speaking, a gyroscopic escapement with a balance that moved in three dimensions would have made the watch unbearably thick. Speaking to Stéphane Belmont, Director of Heritage and Rare Pieces at SIHH 2019 during the launch of the Gyrotourbillon Westminster Perpétuel, he fondly recalled how a serendipitous alchemy of time and aesthetic trends made Jaeger-LeCoultre’s vision of the gyrotourbillon possible – the 2000s made lade large 43-44mm watches en vogue and computerised 3D renderings that simulated virtual complications in operation ushered a new era of gyroscopic regulators for the Le Sentier manufacture. Oh, and lest we forget to mention, CNC technology, the machine aided process of carving metal into precise shapes and curvatures had to avail itself as well, even today, the requirements for the components of Jaeger-LeCoultre’s Gyrotourbillon 3 Meteorite are so exacting that it is available only in limited 8 piece edition without an indication of waiting times. 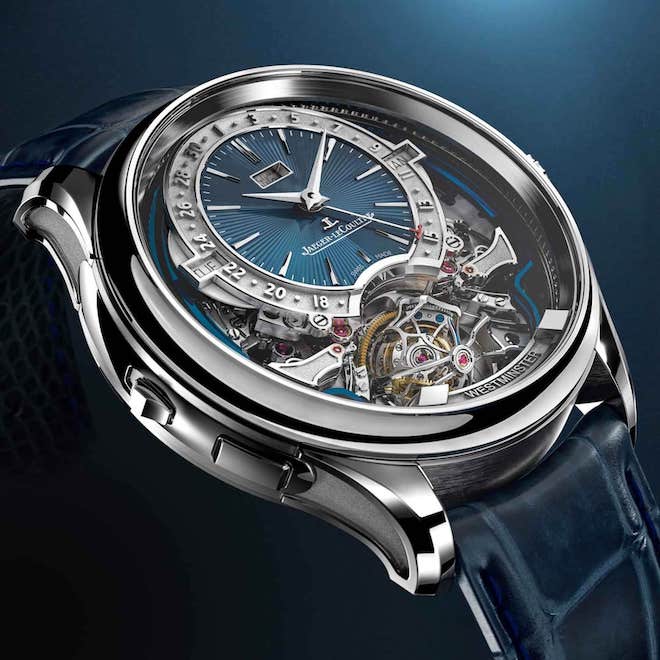 “This type of system where the escapement is always moving is also a guarantee of precision as amplitude remains absolutely constant.” – Stéphane Belmont, Director of Heritage and Rare Pieces

Jaeger-LeCoultre’s gyrotourbillon is the work of Eric Coudray, Thierry Grenier- Boley, André Reymond, Jacques Coulet, Magali Métrailler and not forgetting the CAD specialist who helped implement 3D rendering technology at the Manufacture (he now heads the brand’s R&D department in Le Sentier), the Master Gyrotourbillon was a heretofore unseen new escapement system not a modification of any pre-existing Tourbillon architecture – Pivoting in all dimensions and not just perpendicular and vertical axes – it was a complete system requiring perfect equilibrium in all positions and thus requiring all new parts and architecture hence the dependence on 3D modelling; additionally, the balance spring had to be a predefined shape because of its constantly changing angles which would have rendered it impossible to calculate a mean for the usual positions that a watch could be tested. In essence, Jaeger-LeCoultre’s gyrotourbillon required a complete shift in paradigm. It appears that while Breguet might have invented the tourbillon, Jaeger-LeCoultre has definitively improved it. 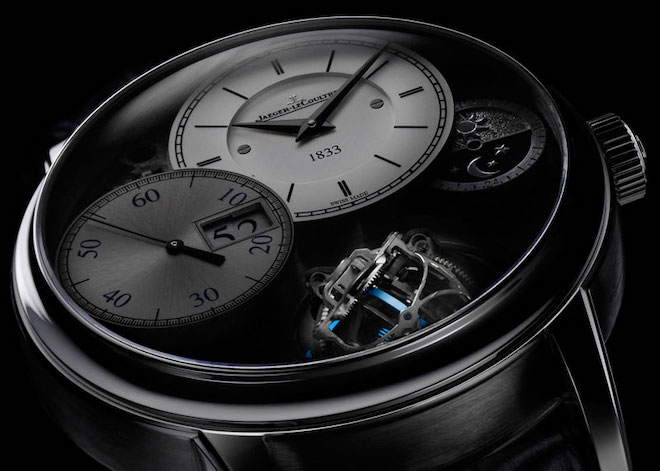 “Half of my watchmaking is traditional . . . with a little bit of a development,” – Eric Coudray

Mr. Coudray and Ms. Métrailler worked in tandem, the former on the technical construction and the latter on aesthetics. Indeed, Coudray has been responsible for some of the most innovative 21st century horological developments and brands like Jaeger-LeCoultre have been among some of his patrons to recognise his visionary blend of 19th century techniques in concert with 20th century imagination. When Jaeger-LeCoultre finally released their Master Gyrotourbillon 1 in 2004, it was the world’s second spherical dual-axis Tourbillon, the first belonged to Franck Muller but they were both, the works of Coudray – a spherical outer cage with once per minute rotation while an inner, perpendicularly mounted cage rotated every 24 seconds. It was an essential development considering that men’s fashion since the age of Breguet had evolved beyond pocket watches in vest pockets and into highly mobile, wrist-worn, time-keeping instruments subject to rigorous arm movements and hence, gravitational and rotational forces. And now, close to 20 years since its introduction, evolved into a smaller, eminently more wearable form with more exacting tolerances. 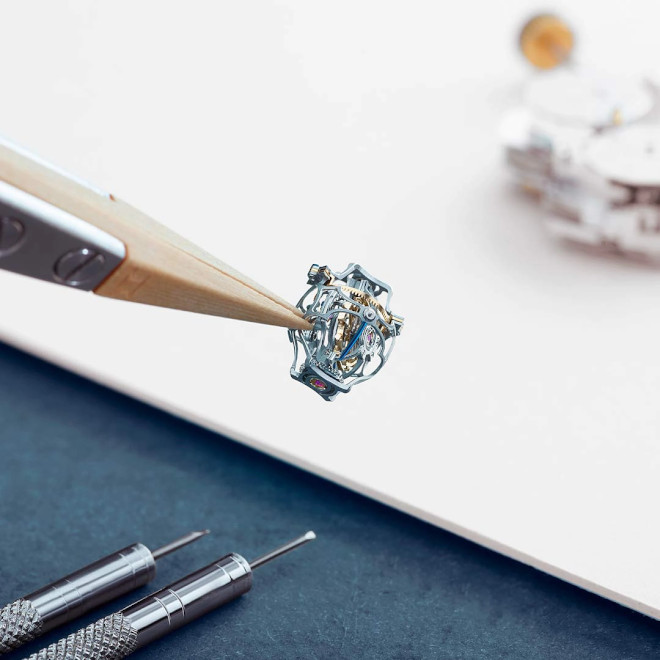 “Jaeger-LeCoultre is one of the rare manufactures, we were the biggest integrated facility in Vallée de Joux over 100 years ago, bringing craftsmen of all specialities with under one roof. Other brands began vertical integration only 25 years ago.” – Stephane Belmont

It’s hard to imagine how the Grand Maison could have foreseen that their historical practice of having all the metiers under one roof for over 100 years could result in a multi-axis Tourbillon with incorporated in a fully integrated chronograph, and dressed with a meteorite dial and Grand Feu enamel subdials in one Master Grande Tradition Gyrotourbillon 3 Meteorite. The Le Sentier manufacture describes it as “representing the highest expression of Jaeger-LeCoultre’s codes,” and indeed, considering its first introduction in 2013, the Gyrotourbillon 3 has come a long way, ably representing the art of precision and the elegant artistic metiers that have since become emblematic of the brand.

Mechanically and visually, the Jaeger-LeCoultre Master Grande Tradition Gyrotourbillon 3 is Le Sentier’s savoir-faire at its finest – at its heart, the blued spherical balance spring beating within the microcosm of two cages set at different angles, turning in opposite directions and at different speeds – this is truly a living masterpiece with no fewer than 592 components, embellished with the finest handcrafts in haute horlogerie. 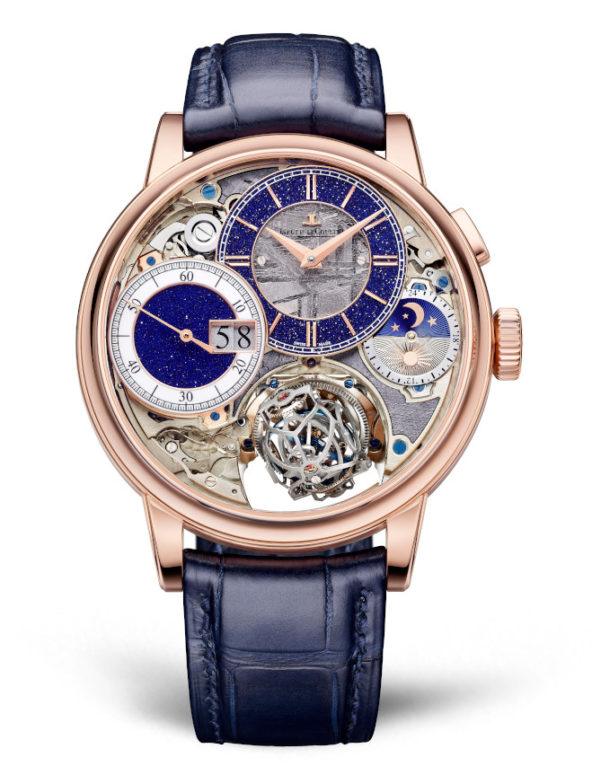 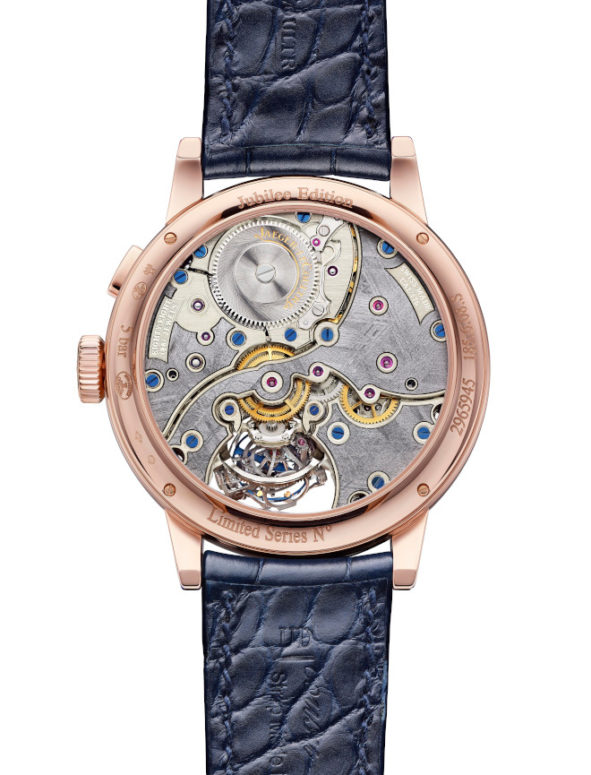 
Setting aside the marvel of the gyrotourbillon for a second (if that was even at all possible), one’s breath is held further in thrall when you consider that the artisans of the Grande Maison have deemed it necessary to include another “complication” within its integrated chronograph: instantaneous digital display – elapsed time is shown at the seconds subdial via an aperture showcasing jumping minutes on digital counter discs – taxing on less prodigiously crafted movements, but ably managed on the chronometrically precise Master Grande Tradition Gyrotourbillon 3’s Calibre 176.

If not already evident, it’s not just master watchmakers working within Jaeger-LeCoultre’s Le Sentier manufacture but a retinue of master craftsman, each a specialist in the Grande Maison’s famed Métiers Rares – the mechanical movement may endow a JLC timepiece with a soul but its striking aesthetics are gifts from the hands of these artists. Using fragments of the Gibeon meteorite found in Namibia, artists carefully frame the wondrous multi-axis tourbillon with  the iron-nickel alloy featuring an octahedrite crystal structure – if the timepiece already exemplifies time’s impermanence, the asteroid fragment travelling through outer space for billions of years, represents the relative eternity of time’s arrow in our limited perspective. The meteorite also dresses the back plates on the movement, matched only by the Grand Feu enamel dial with hand guillocage and the starry “skies” of aventurine. 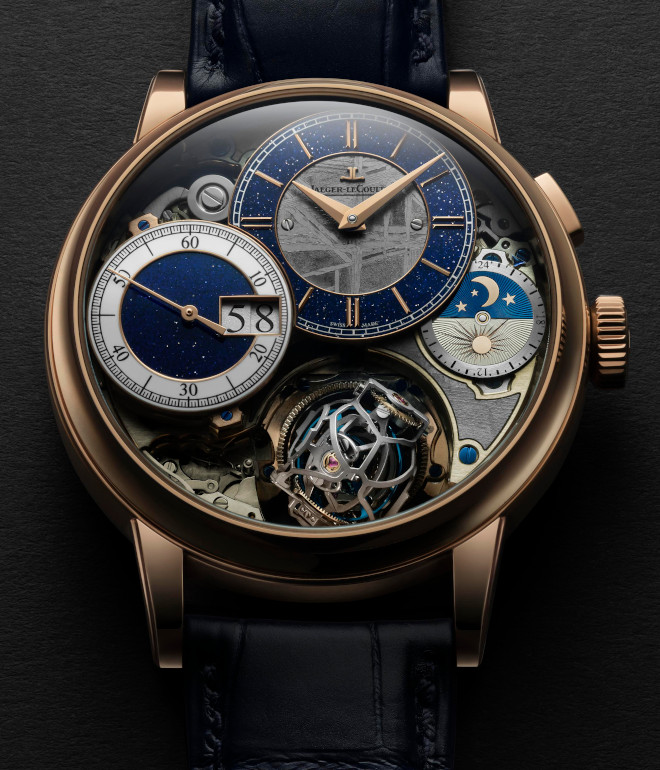 Its a pity that the subdial at 3 o’clock indicates a day/n night display rather than another the brand’s signature complications – moonphase, however, if the amount of artistry that goes into the Master Grande Tradition Gyrotourbillon 3, it likely would have been a prime example of that old adage, “too much of a good thing.” Instead, the 24 hour disc with two gold semi-circles display a day section decorated with fine sunray finishing with the sun represented in polished pink gold disc while night is exhibited with polished pink gold stars and a moon.

Suffice it to say, the only home worthy to all of Jaeger-LeCoultre Métiers Rares would be a 43.5mm 18k rose gold case. Ultimately, the Master Grande Tradition GyroTourbillon 3 Meteorite truly masters the art of precision and Jaeger-LeCoultre’s artistic know-how in a limited production of 8 editions – an eternal representation of the brand values that other watchmakers have depended on in times of yore – certainly the watch belonging to the watchmaker’s watchmaker. 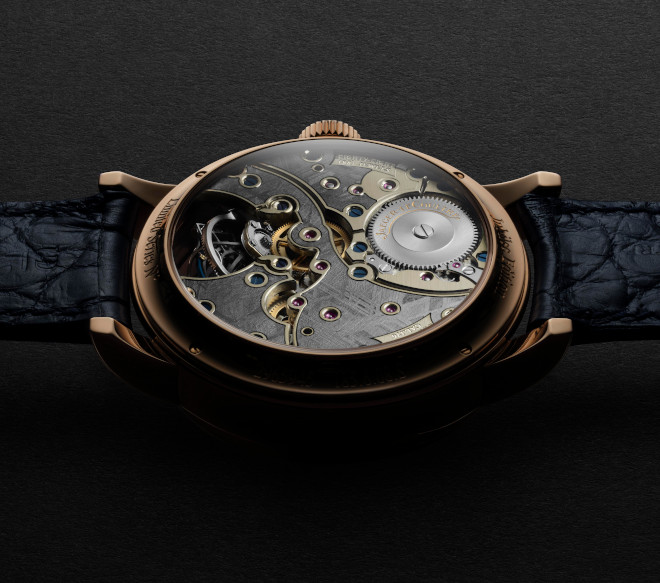