The legendary Tour de France cycling race, which kicks off on Saturday 29th August, coincides with a heightened interest in cycling worldwide. If you are looking for ideas for your next big adventure and you’re happy to hop on a bike to do the exploring then you might just be interested in traversing the terrain via some of the finest cycling trails around the globe.

From coastal trails on the Isle of Wight to lush rainforest routes in Rwanda, and from city cycles in Nashville to lakeside loops in Ontario, here are 11 outstanding biking trails around the world for cyclists to discover.

Ride the ‘Round the Island’ route, Isle of Wight, UK

The Isle of Wight is home to over 322 kilometres of traffic-free cycle routes through some of the most scenic countryside in the UK, as naturalist and TV presenter Nick Baker showcases in this Wightlink Cycling Tour video. Those up for an Isle of Wight two-wheel challenge should take on the circular ‘Round the Island’ route which starts in Whippingham and offers 113 kilometres of superb on- and off-road trails.

Lonely Planet rated the Isle of Wight as one of the best places in the world to explore by mountain bike, so visitors can expect a selection of fantastic natural trails with a wide variety of terrain and breath-taking views. Isle of Wight ferry company Wightlink takes visitors from the mainland on to the Island in 22 minutes, and bicycles come on free with foot passengers.

Re-energise on the Coffee Route, Colombia 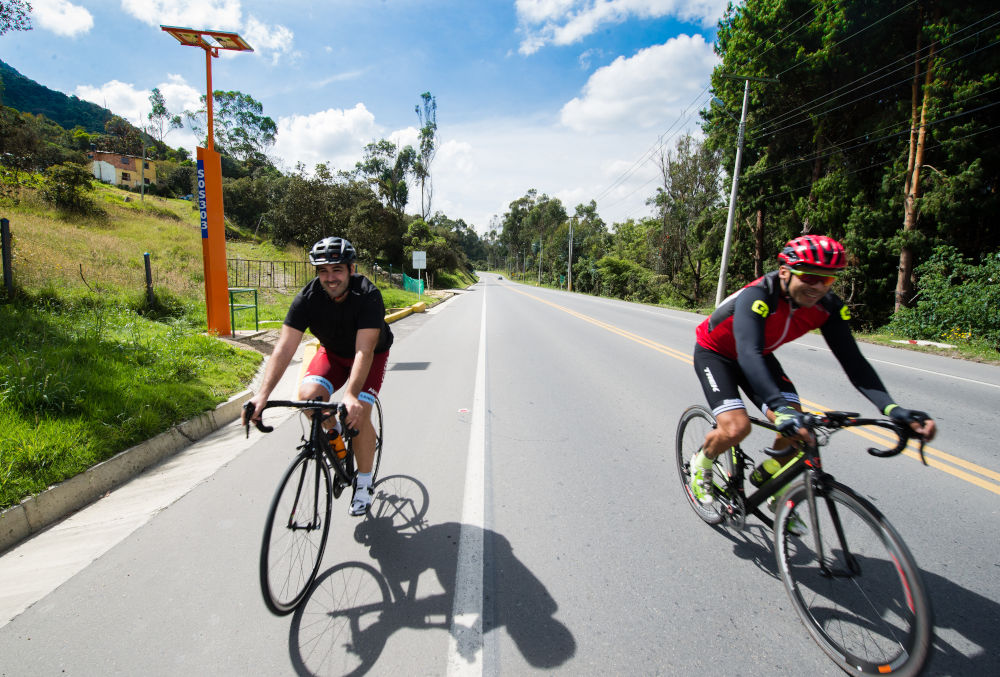 The Coffee Route weaves through Colombia’s Coffee Belt, a region declared a World Heritage Site by UNESCO in 2011

In Colombia, cycling is more than a sport, it’s a way of life, and with Colombian Egan Bernal’s triumphant win at the Tour de France in 2019, the eyes of the world are on Colombia and its spectacular cycling training routes. While pedalling along these routes, cyclists can enjoy national parks and heritage villages throughout the country.

This includes the Coffee Route, which weaves through Colombia’s Coffee Belt, a region declared a World Heritage Site by UNESCO in 2011. This route is ideal for a road or mountain bike and it makes a great three to five-day bicycle tour, offering challenging yet enjoyable trails. What makes this route even more rewarding is the opportunity to revel in the breath-taking landscapes that engulfs the tarmac and ending each day with well-deserved rest on a coffee farm or in therapeutic hot springs.

The Great American Rail-Trail is an ambitious project making use of former U.S. railway lines which are converted into long-distance walking and cycling pathways. The Great American Rail-Trail project launched in 2019 with the vision of creating an entire cross-country, car-free route which will eventually become the first contiguous multi-use pathway across America. The route is opening in stages, and once completed it will offer a safe, seamless and scenic cycle pathway across the entire country spanning more than 3,700 miles from Washington D.C. to Seattle, Washington.

One of the most picturesque portions of the trail, which is already open for cyclists to enjoy, is Montana’s 4.5-mile Milwaukee Road Rail-Trail where the vast openness of Big Sky Country gives way to backcountry pine tree beauty. Framed by the majestic Rocky Mountains, the route is roughly equidistant between two national parks, just a half-day’s drive from both Yellowstone and Glacier. The Milwaukee Road Rail-Trail is perfect for mountain biking in the milder seasons and fat-tire cycling in the snowy winter.

See the sights while meandering alongside the Danube in Vienna, Austria 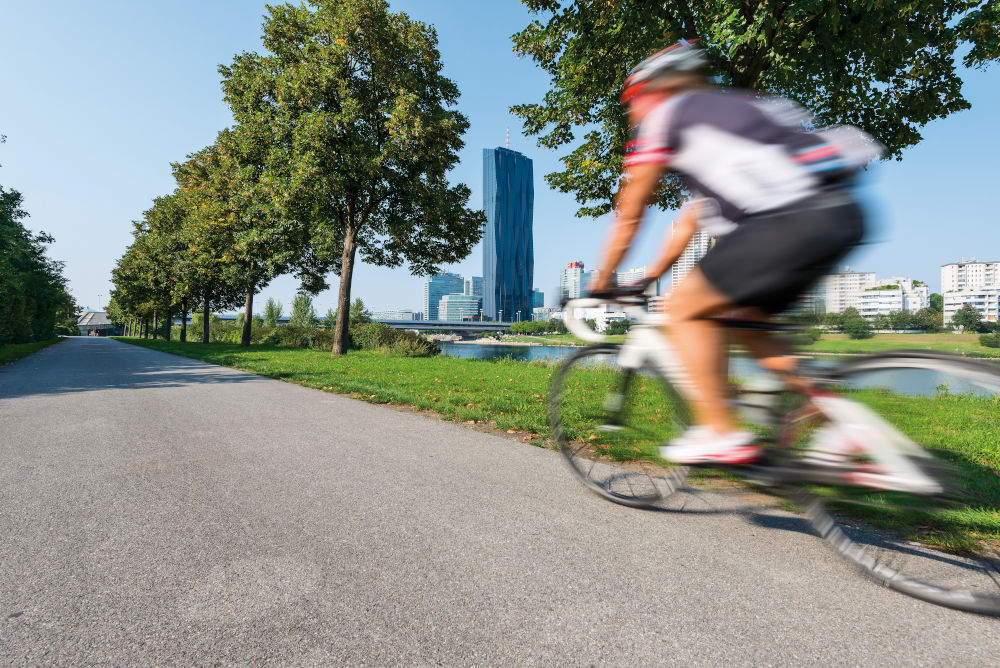 Visitors to Vienna can join the famous cycle path along the Danube which leads from Germany through Austria to Hungary, and is the second longest river in Europe after the Volga. Cycling along the Danube Canal bike path is a beautiful experience in itself, but to catch sight of Vienna’s famous attractions such as the Opera, Parliament and Burgtheater, cyclists should veer off onto the Sightseeing Bicycle Path Ringstrasse that encircles Vienna’s old city.

Riders will roll back into nature when they re-join the Danube bike path at Danube-Auen National Park, which is part of one of Europe’s last primeval forests and is home to a vast selection of mammal, bird and plant species.

Trade the car for the bike and cycle down Monterey’s 17-mile drive in San Francisco, USA

Monterey’s 17-mile drive is one of the most famous and scenic roads in the world, offering glorious views at every point. However, it’s arguably better experienced on two wheels than four, with cycling adding extra drama to the crashing waves, rugged coastline and over-the-top mansions.

The ride starts in Monterey and winds down the coast to the famed Pebble Beach, with myriad turnouts for photo opportunities or stunning sunset beach strolls. For those without their own set of wheels with them, bicycles can be rented from Monterey’s Cannery Row at Adventures By the Sea for $25 a day.

Take a spin on the sand dunes in Namibia 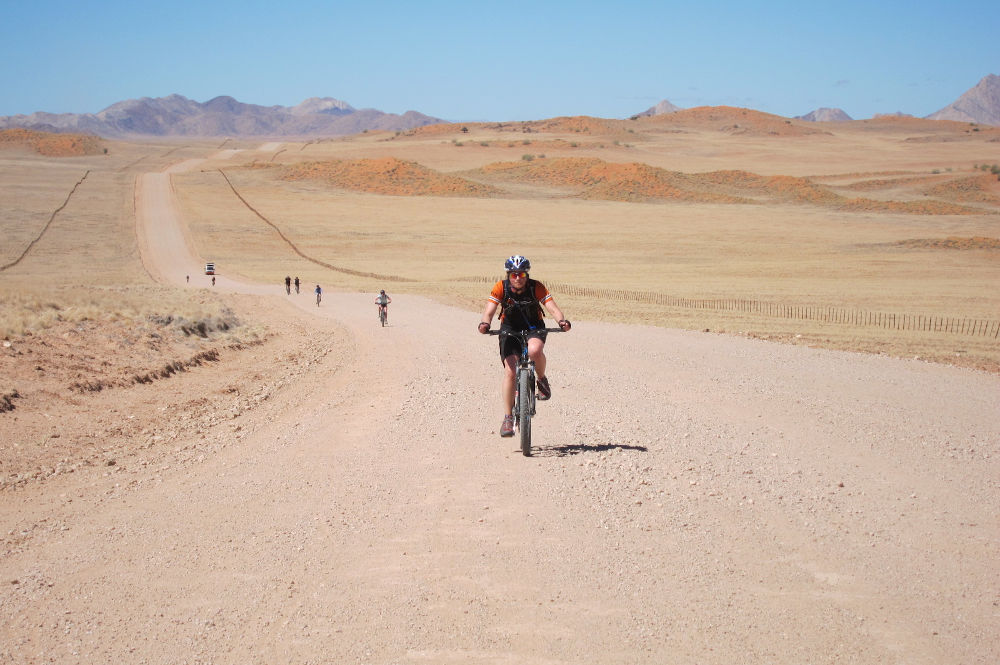 One of the best ways to appreciate the natural beauty of Namibia’s wildlife and vast landscapes is by bike. Adventurous cyclists looking to challenge themselves can book the Exodus Cycle Namibia trip which offers the chance to cycle across open sand dunes, between granite hills and over challenging rocky outcrops.

Beginning in Windhoek, cyclists will visit the towering dunes of Sossusvlei and climb Dune 45 where the contrast of rusty-red sand against the blue sky is breath-taking. Travelling north, cyclists will ride across the Tropic of Capricorn where they’ll zoom past ostriches, gembok and mountain zebras before heading to Swakopmund to try fat biking, where the wider tyres allow visitors to explore remote areas that traditional mountain bikes are unable to reach. Other highlights include spotting the ‘Big Five’ on a safari in Etosha National Park before sleeping under the stars at a tented camp.

With Nashville’s bikeways and greenways rapidly expanding, cycling is the perfect way to explore Music City’s legendary landmarks. The City Tour Trainer route is 13.7 kilometres and a large stretch of this is a cruise alongside the Cumberland River, offering a dramatic riverfront view of Music City’s skyline. It journeys through two of Nashville’s neighbourhoods, the first is Germantown, packed with history and culture, and home to the Tennessee State Museum and Bicentennial Capitol Mall State Park.

With the area housing some of Nahsville’s most critically acclaimed restaurants such as Geist Bar and Restaurant, cyclists will never be far from a refreshment. The route also takes in North Nashville, which is best known for the Buchanan Arts Districts and its selection of delightful artisan studios and independent shops. 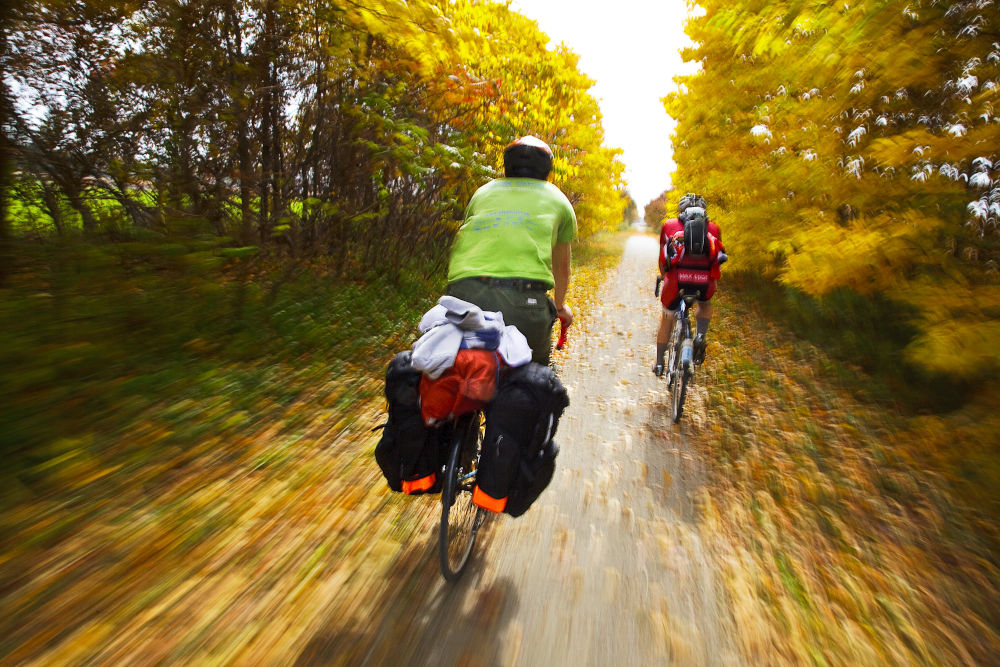 Home to thousands of kilometres of biking tracks, rugged wilderness trails and even abandoned logging roads, there’s no better way to experience Ontario than on two wheels. A bucket-list trail for adventurous cyclists is the Waterfront and Greenbelt Route, which stretches for a whopping 1,000 kilometres (and counting).

Kicking off in Hamilton, cyclists will zip past historical towns, majestic lakes and rolling provincial parks with the latest segment taking the experience to a new level, travelling along Lake Huron North Channel’s quiet back roads, serving up rocky shorelines, rushing waterfalls and flowing rivers.

If time is short, the full route can be broken up into smaller day trips, with an iconic route being the Niagara-on-the-Lake to Dunnville (110 kilometres) section which heads past the iconic Niagara Falls and picturesque vineyards before stopping at the shores of Lake Erie.

One of Trentino’s most famous cycling routes begins in Tesero and journeys through to Pompaego, offering majestic views in both summer and winter over the region’s dramatic alpine setting. When cyclists first set off they will be riding through history, as they cycle the same ascent as legendary cyclists Marco Pantani and Pavel Tonko when they famously raced towards the Giro d’Italia finish line in 1998.

This route is classified as having a high level of difficulty and is most suited to experienced riders. The trail will take cyclists down a route bursting with picturesque scenery and incredible mountainous views which make the challenging ascents worthwhile.

Take cycling to a new height in Abu Dhabi, UAE 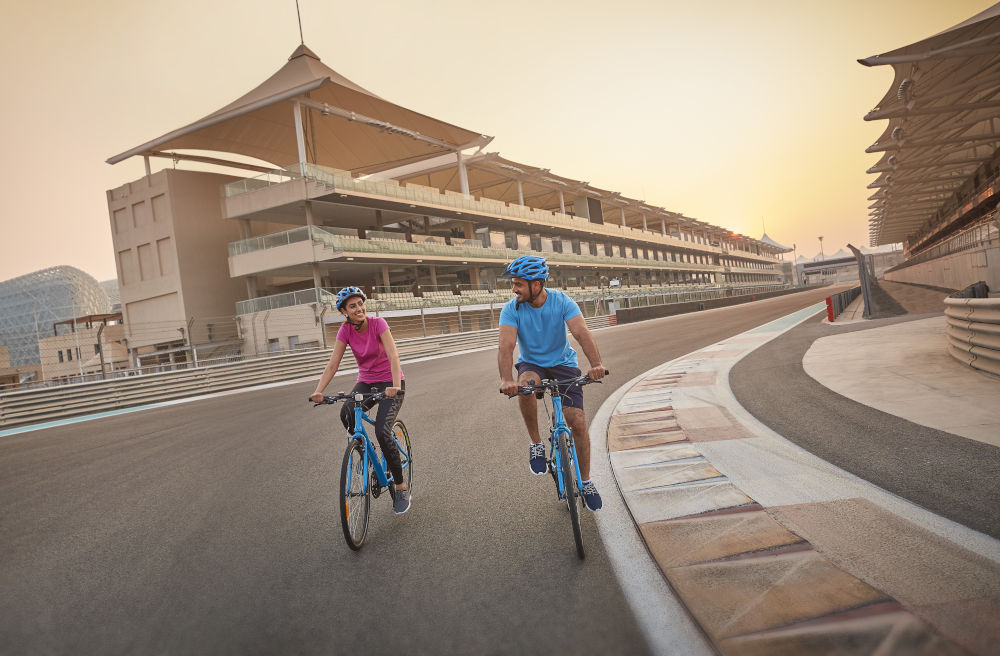 Keen cyclists can test their stamina on a hill climb out of the UAE garden city of Al Ain on a 1,200-metre ascent of Jebel Hafeet – the emirate’s highest mountain. The 12-kilometre road isn’t for the faint-hearted with an incline as steep as 30% in parts, however, jaw-dropping views over the desert at sunset make this ride unforgettable.

Enthusiasts looking for something a little easier should visit the Formula One Yas Marina Circuit which opens its track every Sunday and Tuesday evening for cyclists, with road bikes available to hire. Following in the tyres of Lewis Hamilton, cyclists can take on the circuit under floodlights and ride to an exhilarating soundtrack.

Absorb the wondrous wildlife on the Congo Nile Trail, Rwanda

Known as the ‘land of a thousand hills’, the stunning volcanic skylines, plush rainforests and incredible wildlife make Rwanda one of the most remarkable countries in the world. Heralded as the greatest cycling route in Rwanda, the Congo Nile Trail is 227 kilometres and takes roughly five days to complete. Running parallel to the eastern shore of Lake Kivu, it offers cyclists spectacular views over the expansive body of water.

The specialist tour operator Rwandan Adventures can also create bespoke itineraries along the trail, including visits to Rwanda’s colourful capital, Kigali, and the district of Musanze. Exploring Rwanda’s countryside by bike is an authentic and liberating experience, allowing cyclists to immerse themselves in the local communities and the extreme natural beauty the region offers.