Living in the Pacific Northwest often means not having to travel far for bass music events. After making the pilgrimage in 2018, however, I determined that Bamboo Bass Festival is well-worth the journey. Bamboo Bass essentially takes the best in Western Canadian vibes and West Coast Bass music and drops them square in the Costa Rican wilderness, in turn creating an oasis of open-hearted individuals, amazing energy, and expertly curated music in a breathtaking tropical setting. 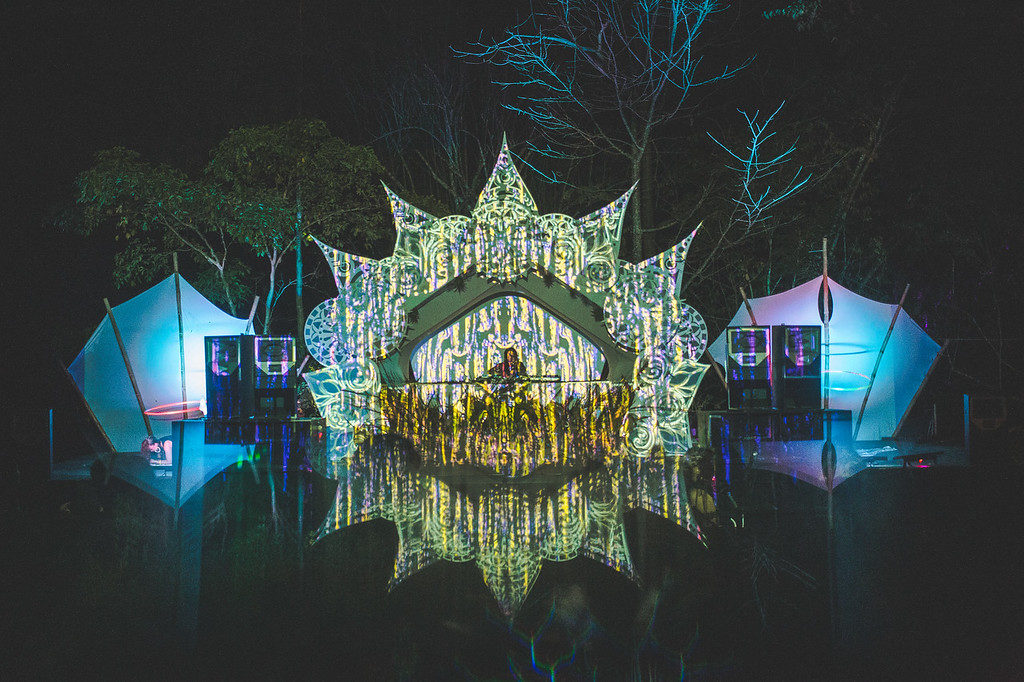 This was a pivotal year for Bamboo as they took major strides toward investing in the future and creating more permanent infrastructure. As a result, many notable changes were made, making this event felt more like an established festival rather than a flashy jungle renegade. There were significant improvements made to production, sound, festival layout, and most notably a brand new location.

With a new venue, the usual two-stage setup allowed for so much more space at either stage. La Brisa had the same beautiful setup as 2018, a geometric sunburst of abutting double arches, with illuminated fin-like wings on either side. Though the projector was a bit unfortunately positioned, beaming on people dancing at center stage, the beautiful mapped visuals added more color, depth and vibrance.

This year, La Selva was redesigned by the talented Reliquarium and had a completely new, jaw-droppingly awesome look. Giant beams of criss-crossed bamboo stems supported a 3-dimensional design comprised of multi-segmented woodcuttings that together looked like a psychedelic mecha-cicada. The stage was also endowed with insanely intricate visuals that breathed life into the insectoid facade. Bamboo’s multi-year deal with The Reliquarium is intended to bring to a new ever-morphing design each successive year. These changes I personally cannot wait to witness. 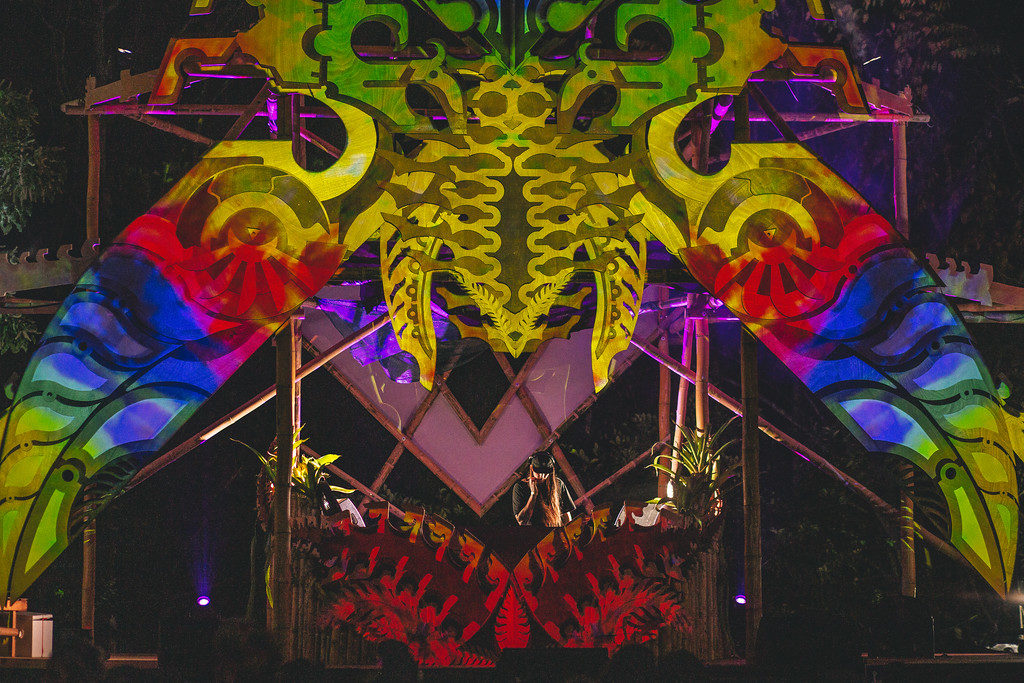 Bamboo changed up its sound game from the usual all-PK setup. Instead, it was a PK / Funktion One hybrid situation where La Brisa was all Funktions, and La Selva had Funktion One speakers and PK subs. The setup delivered an all-around remarkably powerful sound with PK’s seismic lows, and crisp, punchy mids and highs from the Funktion Ones.

Bamboo Bass’s musical platform is deeply rooted in bass music, and bringing the best in West Coast bass is something at which they particularly exceed. But Bamboo’s curators are also aware that talent exists beyond the bass. As such, the artist lineup featured a healthy variety of styles. There was a little bit of something for everyone on the spectrum of dub, house, drum and bass, downtempo, and breaks.

I did miss the filling of funk and glitch hop we got last year, when more Fractal Forest artists had been booked (bring Featurecast to Bamboo 2020!). However, I was most excited for the return of my Bamboo must-see Funka, a local artist from Costa Rica’s capital who I didn’t know before Bamboo 2018, and whose set that year completely blew my mind. And he really stepped it up, singing his own vocals and shredding the electric guitar to a set that started off old school funky fresh, before descending deep into the rabbit hole of heady psybass. 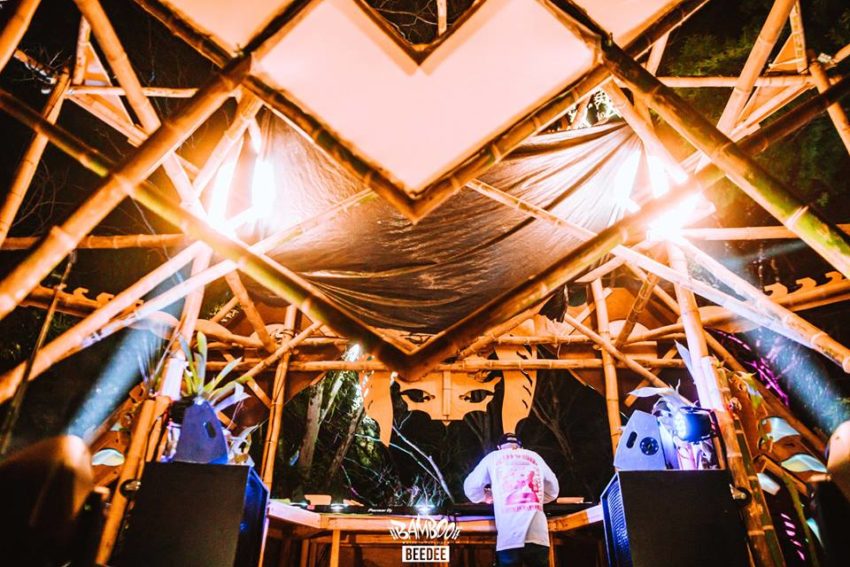 Among my most notable artist discoveries this year were Beat Kitty, during whose set I wanted to leave to get food, but from which I legitimately could not pull myself away, and Distinct who filled my soul with my favorite brand of fast, heavy fast drum and bass. Ahee was the very first artist we caught upon entering the venue, and his is upbeat style of deep and dark, to uptempo alien bass breaks was a most awesome way to kick off the festival.

I personally can’t do overly uplifting music, but Pineo & Loeb‘s set was just the right amount of glee I can take in a single sitting without feeling queasy. It was an all-around jubilant time, with both artists up on stage having the time of their lives, and us down below moving without a care in the world.

I can’t go without mentioning JVMPKICKS, who absolutely threw down for two full hours, as well as the obligatory Sleeveless Records showcase on Sunday night which involved six-plus hours of dark, heavy West Coast Bass. Zeke Beats was a new addition this year, who opened the gates to the netherworld. JLEON is a must-see at any festival, who changed it up from the usual deep dub to a hefty, and most welcome, dose of DnB. Finally, as we were rounding up the crew for the last time, I was entrapped by SuDs at La Brisa, the last artist I caught. 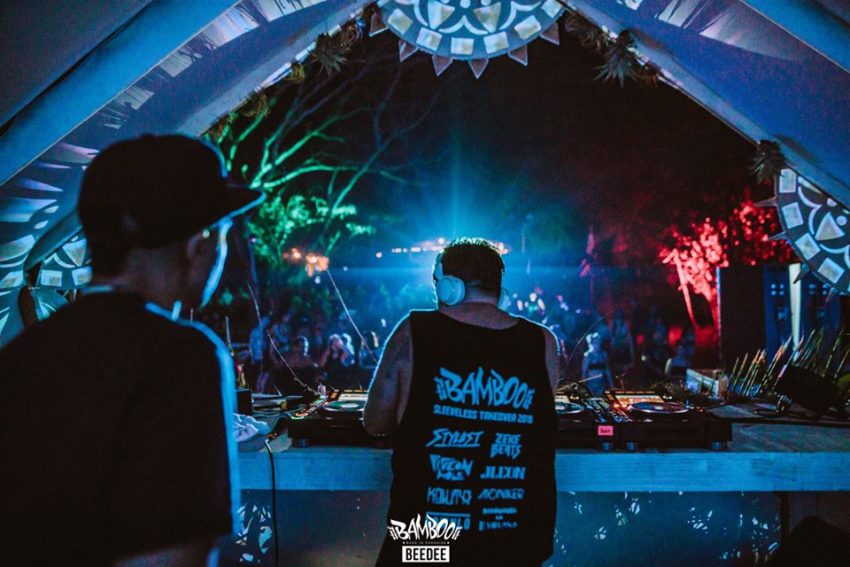 The most profound change Bamboo experienced this year was its location, which alone created all new excitements and challenges. There were certain aspects I liked about the new venue, and some I missed from the old. One thing I distinctly missed about Jaco Ropes was the dense tropical foliage. Massive leaves hanging from every direction gave it a much more jungly feel, while the flora of the new venue consisted more of an open, dry forest. The Park at Ocean Range, however, is a significantly larger venue which allows for endless possibilities. Most importantly, it gives more room for the festival to grow, with more areas to rest, frolic, move, and explore. That said, the larger space is still a very manageable size from an attendee perspective.

The wider space was utilized for installments at either stage, including art panels, installations, and platforms built around towering trees at both stages, with ample space to sit back or perch high for better views.The walk between stages was about three minutes through a dirt trail graciously illuminated with string lights. A relatively short distance, but enough to minimize sound bleed and a distinctly longer walk than last year’s. Between either stage was frolic zone of interactive art installations that included a tattered pirate ship, waterfall of projected visuals, and countless panels of street art. It was a solid place to hang out, wander around, or get lost in the sauce.

Perched on a hill overlooking La Brisa was an eating area with a covered patio, where guests could purchase food and drinks, or sit and check out the view. The sound coming from La Brisa was surprisingly crisp from up there, and it was a cozy spot to look out at the stage, whilst sitting in a chair swing with an ice cold drink. There were complaints, however, that having only one food vendor led to long wait times for food, which was definitely the case at certain points in the night. Overall, though, it was a really nice space, and hopefully they can put in more food vendors alleviate overcrowding. 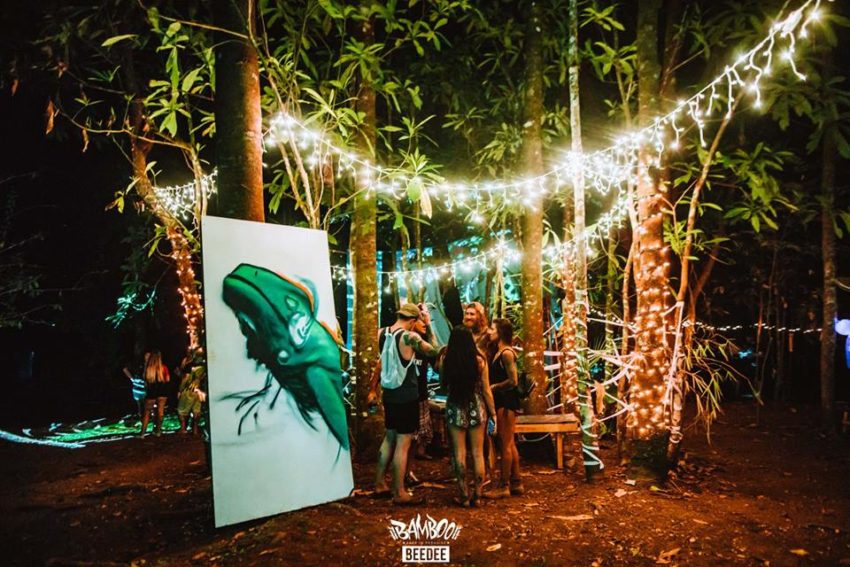 One significant challenge the new venue presented was transportation, since The Park at Ocean Ranch is much further out of town. Jaco Ropes was just off the main highway at the edge of town, easily accessible by taxi and even walkable to certain locations. The Park at Ocean Ranch, however, was about a 20 minute drive out of Jaco, at the end of a treacherous dirt road. Not a place where taxis would organically appear, and not at all easy to walk back to civilization. What’s more, only one member of our nine-person crew had cell service in the venue, so calling an Uber wasn’t an easy option. Ultimately, getting back home took more strategizing than expected.

The festival provided shuttle services for a small fee, but the shuttles were relatively few and far between, and fairly small for the necessary capacity. The reason our crew easily made it home each night was by way of the cab driver who brought us on the first night. We obtained his phone number and negotiated a rate to take us to and from the festival each day thereafter. Unless the festival hires more shuttles in future years, I figure the most reliable way to get to and from the venue might be to rent your own vehicle or hire your own driver. 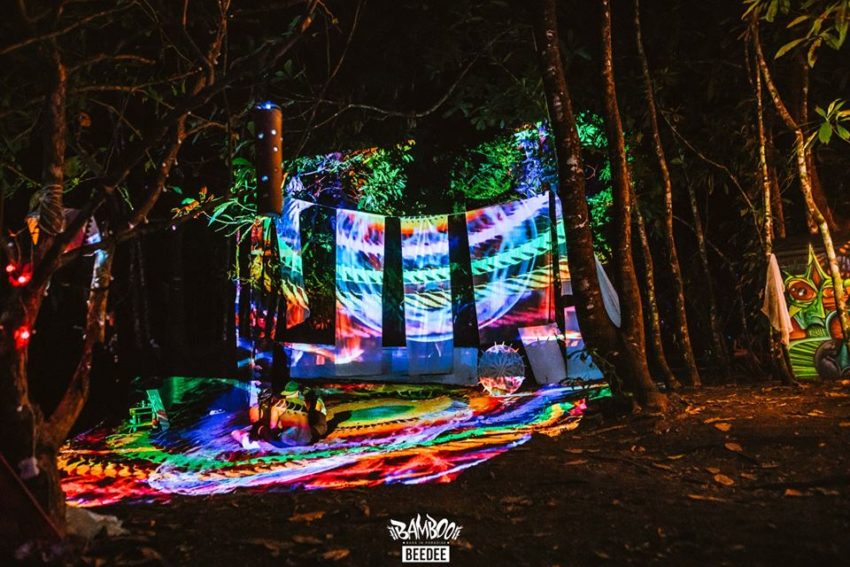 Moving to a new venue presented new growing pains that any young festival might face. Being set in a foreign country exacerbated some of these challenges. Among these complications was the festival gates being delayed on the first two days. It was never quite clear to me exactly what was going on, and a lot of misinformation and rumors began to spread.Though much of it was beyond the festival’s control, I believe more specificity and transparency could have been offered on the festival’s part.

I don’t want to continue spreading misinformation, and want to be clear that I still don’t know precisely what went down. But I do know that a permit issue, which was later resolved, caused doors to open late on the second day. In addition, I was told that the local police had set up a checkpoint for a brief period of time just outside of Jaco, a common occurrence in Costa Rica, but which left some festival-goers a bit shaken up.

There was also some tension between the harm reduction team, Karmik, and administrators of Bamboo, which resulted in Karmik’s absence for the final two days of the event. I cannot reasonably say more about this since I do not know the details.However, many indignant comments arose in response to these circumstances, which I found extremely arrogant and out of line. Ultimately, Bamboo Bass is set in a foreign country. Being a Canadian run event, many in attendance are naturally accustomed to the luxuries of Canadian festivals. But it’s downright foolish to assume the same expectations of a large-scale event hosted in Central America. Costa Rica isn’t Canada. This must be respected. Be smart, be safe, be flexible, watch out for your crew, act appropriately, and enjoy the setting. 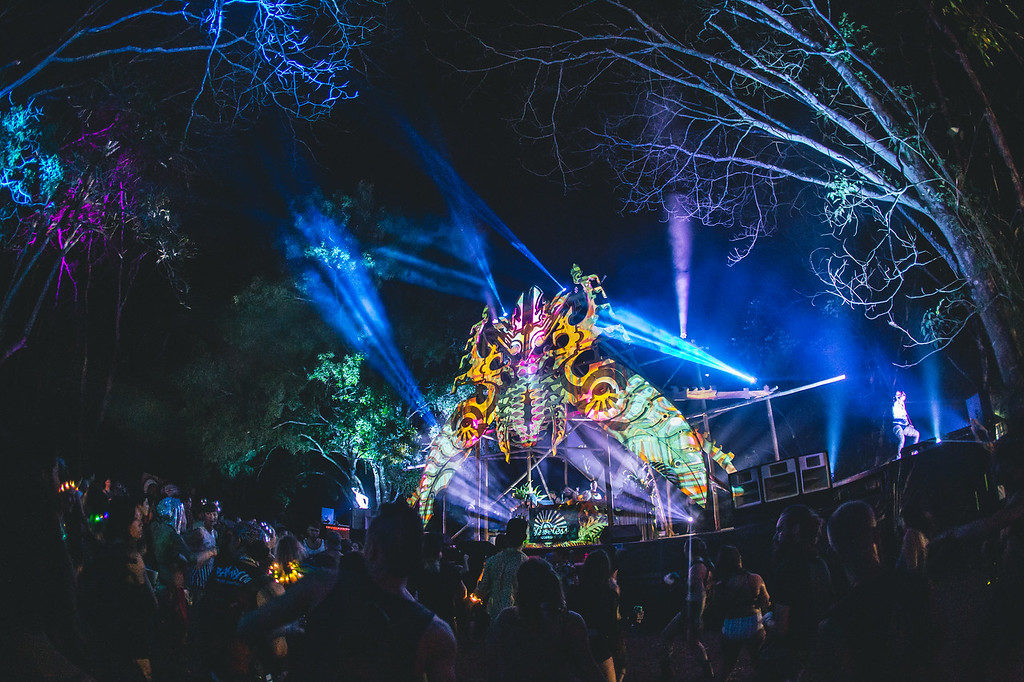 The growing pains of Bamboo 2019 surely resulted in trying experiences for some festival staff and attendees. But in the end, my crew and I had an absolute blast. Some food for  thought, even if you’re not having the best time at the festival, you’re still in Costa Rica!

Bamboo Bass Festival is a colorful multicultural landscape of art, music, and good vibes. It’s among the most inclusive festivals I’ve attended, where everyone from around the globe has a home. It feels, in some ways, like a microcosm of the country in which it’s set: an exotic escape from the norm in which everyone is welcome. I personally intend to keep coming back, and I am quite excited to keep watching this festival continue to evolve.

By admin 57 mins ago