One of the finest elements of heading off on a holiday of dreams is experiencing delightful cuisine every single day of your trip. Taking a step away from foods that you can make at home and embracing new ingredients, dishes and styles of eating is paramount when looking for exciting and memorable culinary experiences while abroad. If, like many, the dining part of your holiday is an important one, then you will surely be looking to seek out a resort that encompasses a range of cuisines from all over the world, with restaurants that have been recognised in the industry. If year-round sun, endless beach-side activities, and a top-notch culinary offering is what you desire then the southern shores of Tenerife is the perfect choice, and for a five-star resort that has an exciting culinary offering, Bahía del Duque in Adeje should be your first choice. 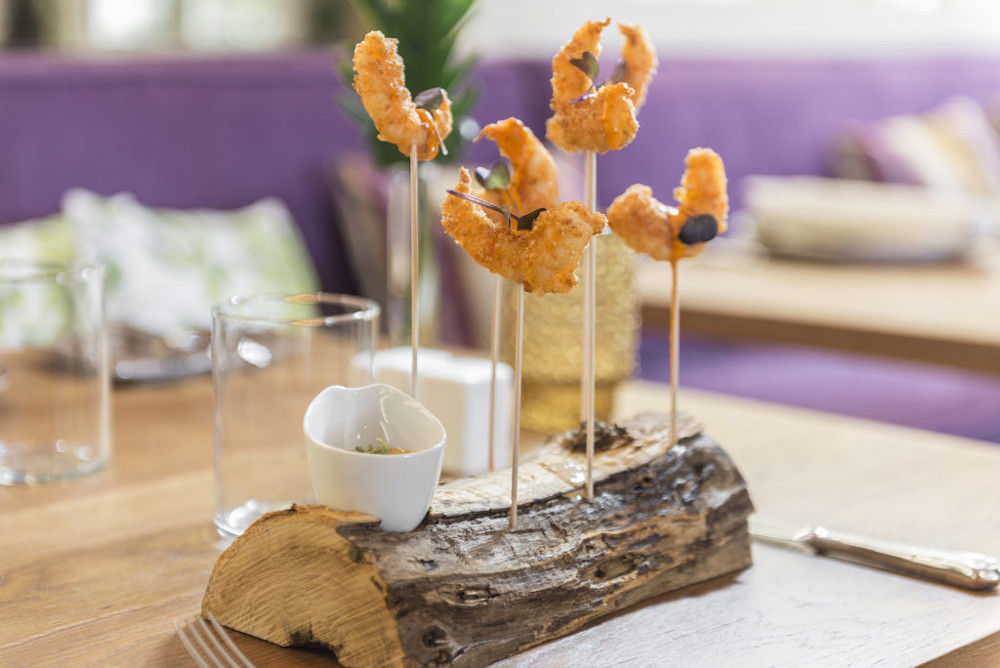 Providing a universe of flavours that cuts across different cultures; Italian, Japanese, French, Basque and Canarian cuisine, the restaurant offering at Bahía del Duque – a member hotel of The Tais Hotels and Villas – is an impressive one, made more so remarkable with the introduction of the one Michelin star awarded restaurant, Nub. Nub will launch on January 23rd at the resort and brings with it almost five years of gastronomic know-how. Founded in May 2016 by chefs Andrea Bernardi from Italy and Fernanda Fuentes-Cárdenas from Chile, Nub was awarded in 2018 with one of the prestigious stars during the Michelin guide editions that was held in Tenerife in November 2017. Nub has revalidated the Michelin star award on every occasion since. Its culinary concept is based on recovering origins, on a mixture of traditional roots and a cultural bridge between Latin America and Europe. The mastery of the chefs reflects their concerns and their way of living; their cuisine has a very personal style, where stories and new ideas inspired by products from the Canary Islands are intertwined. 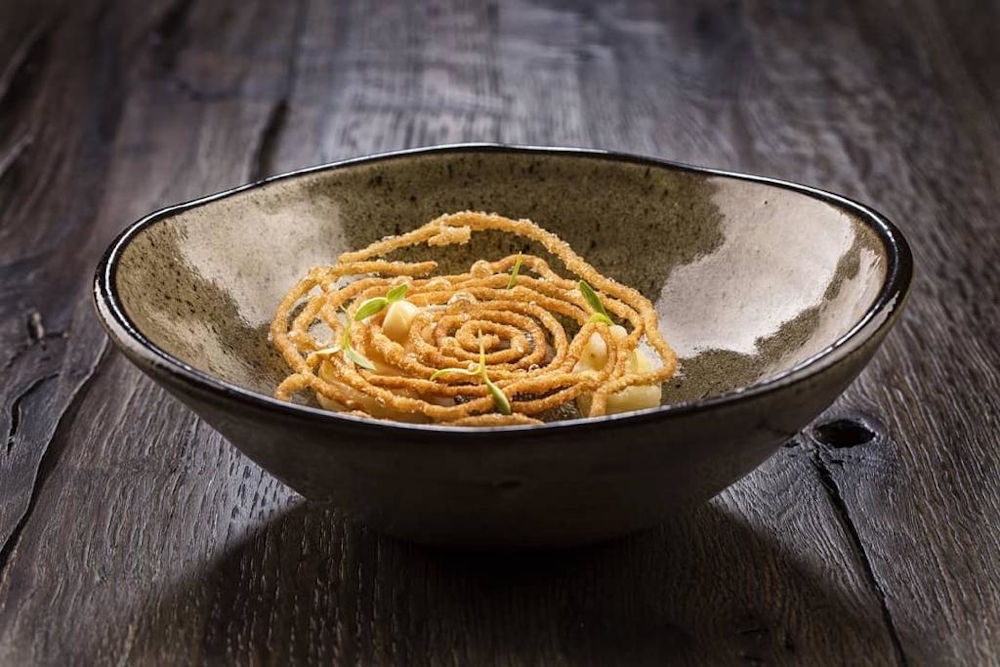 The culinary concept at Nub is based on recovering origins, on a mixture of traditional roots and a cultural bridge between Latin America and Europe

Speaking of the move to the family-owned hotel and resort, Fernanda Fuentes said: “Bahía del Duque provides us the best space we could ever imagine to grow and develop a concept that is much more than tasting a menu; it is rather a comprehensive sensory experience. The same way clouds move, diners advance through three stages in three different environments whilst enjoying this experience with all their senses”. The restaurant is firmly footed in a concept that includes artisan products, dishes and utensils manufactured by local and national creators as key factors to properly deploy their gastronomic know-how. The essence of Nub perfectly combines with the identity of Bahía del Duque. Ever since its origins, the hotel has constantly cared for and promoted its Canarian identity, tradition and innovation as the pillars to become a national and international icon for offering the most exclusive service. Cristina de Juan, the hotel manager said: “the landing of Nub in Bahía del Duque represents a milestone and a new commitment to excellence during this crucial time for tourism, a sector where, more than ever, authenticity and tailored services gain value to create unique experiences”. 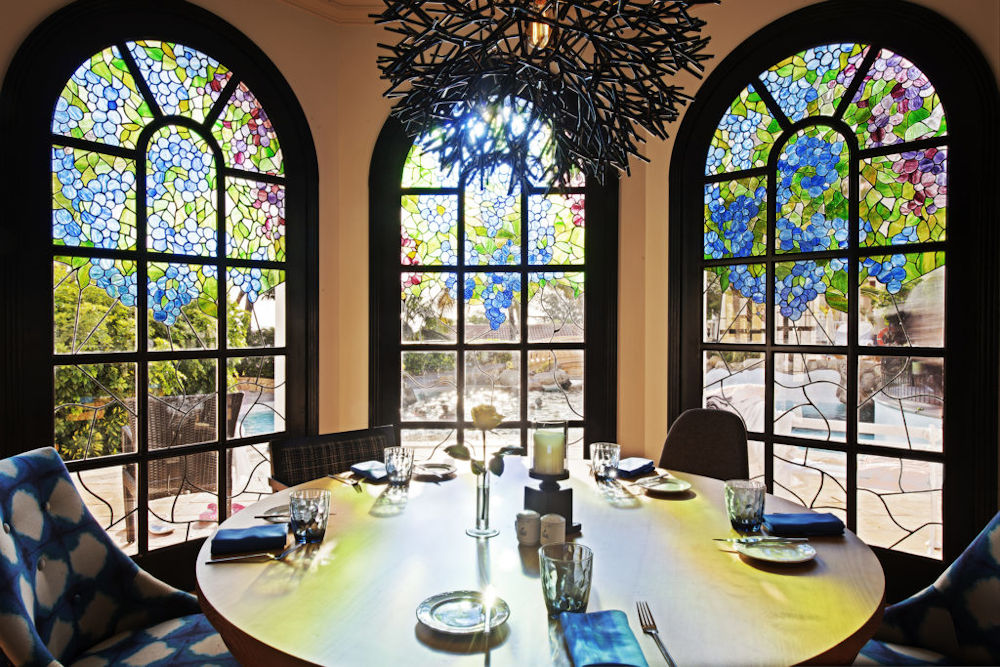 The finest of ingredients are prepared in tantalising ways at La Brasserie by Pierre Résimont, and the setting is as elegant as the food

Along with the introduction of Nub, Bahía del Duque boasts a fantastic selection of restaurants to delight the senses and the most discerning palates. La Brasserie by Pierre Résimont, whose restaurant L’Eau-Vive in Belgium has been endorsed with two Michelin stars, provides diners with refined Gallic dishes and wines including red king prawn, spinach, tomato and bisque; Chateaubriand; lobster, risotto, Sarawak pepper and basil; and the classic crème brûlée. Spectacular breakfasts and an exquisite dinner service are promised at El Bernegal, the hotel’s main restaurant. Expect to taste the best international cuisine with themed buffets and show cooking to delight. Being on the coast you should expect to sample some succulent and the freshest of seafoods, and the Beach Club offers just this. What’s more, diners will hear and see the lapping waters as they dine on the Mediterranean cuisine and sip on the finest white wines on the terrace of this restaurant. 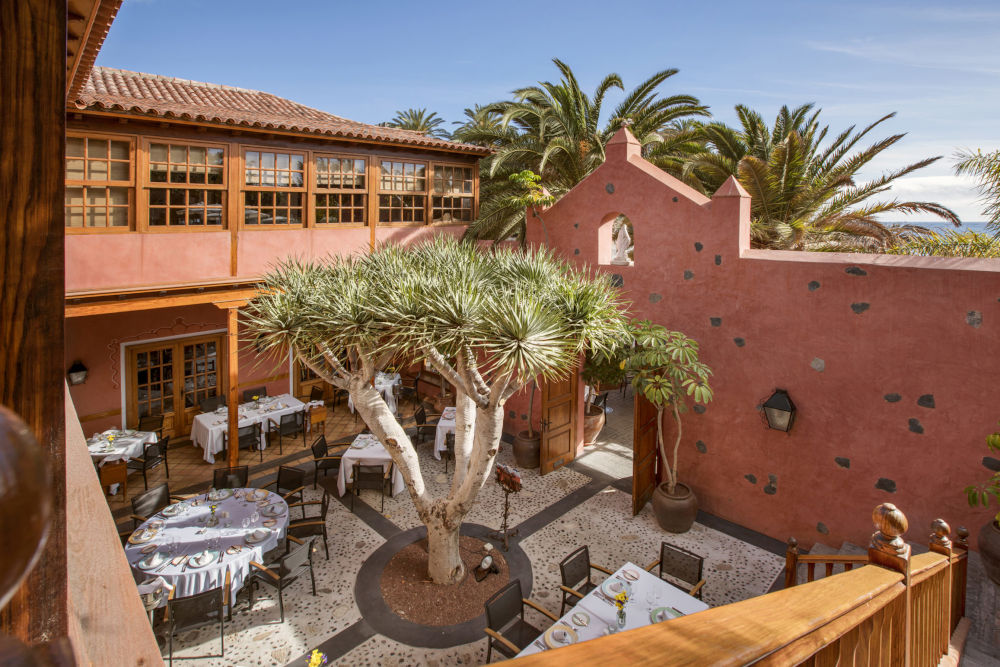 Whether it’s a cocktail at sunset with snacks, salad, soup, taco or fajita, diners will be in for a treat at La Hacienda

Fusing market food and haute cuisine, Alisios is the modern and elegant restaurant inviting you to change the way you typically dine. A select menu of daily recommendations uses fresh and seasonal ingredients in dishes such as fried prawns with kimchi sauce, duck dim sum with chipotle and yogurt cream and Josper grilled turbot. Lovers of Italian food will be satiated with the pasta, pizza and traditional Italian dishes available at La Trattoria. Transport to Tuscany with the charming interiors and enjoy the nightly shows that take place in the Central Plaza from the restaurant’s terrace. Basque cuisine is well known for being highly awarded and those wishing to taste the offerings from the region can do so at Sua. Authentic Basque cooking styles combine with a modern space to provide another unique dining experience at Bahía del Duque. Expect a delectable selection of small plates and larger dishes such as Ibercio ham croquettes, grilled fish of the day and terrine of roast suckling pig. Finally, La Hacienda serves up Mexican cuisine with beautiful seaside views. Whether it’s a cocktail at sunset with snacks, salad, soup, taco or fajita, diners will be in for a treat.

The World’s Best Private Most Exclusive Villas To Book

New York is jumpstarting the return of events with NY PopsUp

Are you looking for a Creative Cocktail to toast to another year with your loved one?