A highly prized car model that was famously featured in the 1969 film The Italian Job starring Michael Caine, is set to fetch upwards of US$1.2 million at an upcoming London auction held by RM Sotheby’s.

The car in question – a 1969 Lamborghini Miura P400 S – was unearthed earlier this year in a small barn in the quiet German mountain region of Black Forest.

“I think it’s fair to say that for many collectors, an original Miura such as this, is the ultimate prize.” – Maarten ten Holder, Executive VP & Head of RM Sotheby’s Europe

The car, painted in “Giallo Flay” yellow, is being described as a “time capsule” because it still has all its original parts – from the exterior paint, to the trim details and mechanical components like its 3.9 litre V12 engine – completely in tact. 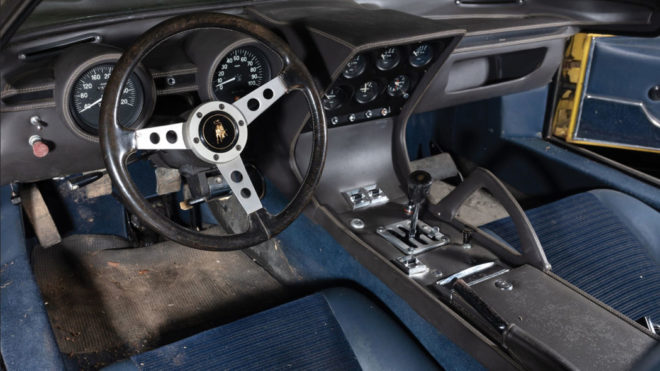 A car left in its original condition, especially one as outstanding as the Miura P400 S, is a rarity, which is why RM Sotheby’s is predicting a fierce bidding war that will land the price closer to the US$1 million range.

This 1969 gem has its owners to thank for keeping it in such a pristine state. It was originally owned by local advertising executive Walter Becker, before race car driver Hans-Peter-Weber bought it over in 1974. Weber then passed down the Miura S to his nephew, who took great care of it until his death in 2015. “It’s a rare honour to offer a car as significant as a Miura P400 S in this kind of unrestored, original condition. Any Miura S is rare and desirable in its own right, but the car we are selling in London is an opportunity that would be very hard to repeat.

“I think it’s fair to say that for many collectors, an original Miura such as this, is the ultimate prize. With new dates also announced for our 13th London sale, I am delighted to have this car as an early star lot, and we are confident it will attract interest from around the globe.”