What better way to kick off the spring than with a tour and there are some major headline tours coming this season. Between new music, new merch, and new stage setups, a slew of our favorite artists have announced massive headline tours that stand to be monumental. Check out 15 must-see spring tours below. 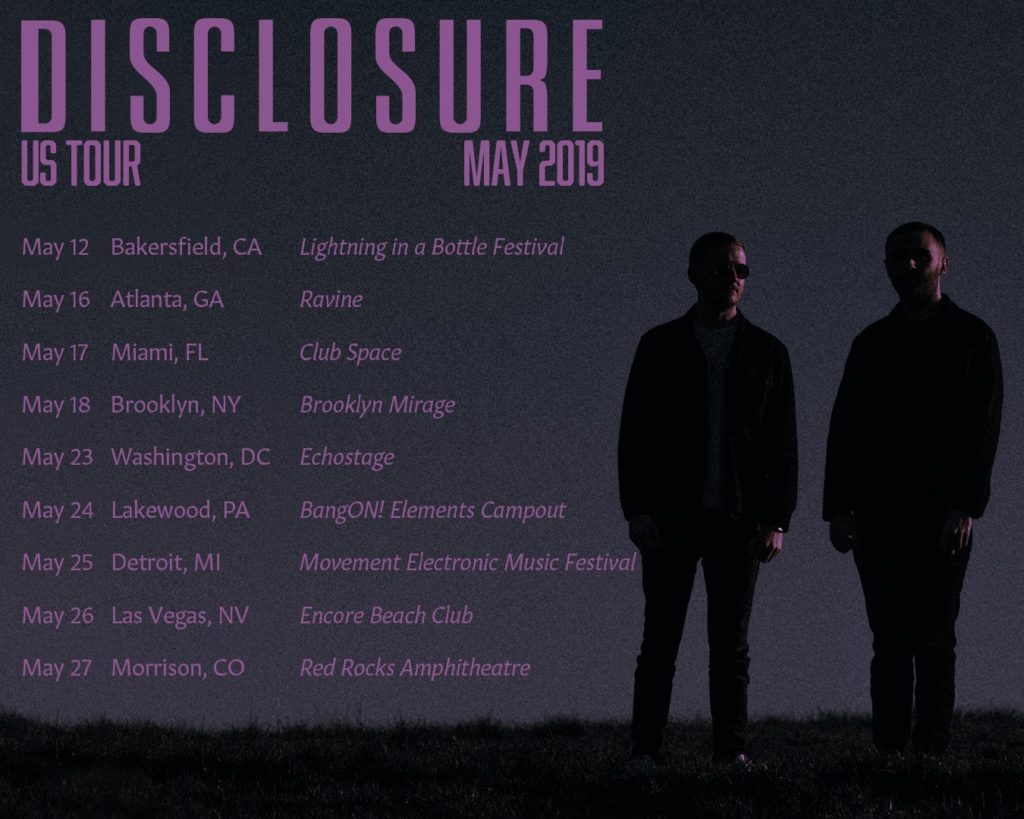 Disclosure is making waves with announcent of a new U.S. tour. Their upcoming tour marks the duo’s first U.S. tour in nearly three years. Slated for this May, Disclosure will hit nine cities with performances at Lighting In A Bottle, BangON! Elements Campout, and Movement Electronic Music Festival. Their US tour will conclude with a monumental headline DJ set at the prestigious Red Rocks Amphitheatre, where they’ll be joined by Four Tet and more. 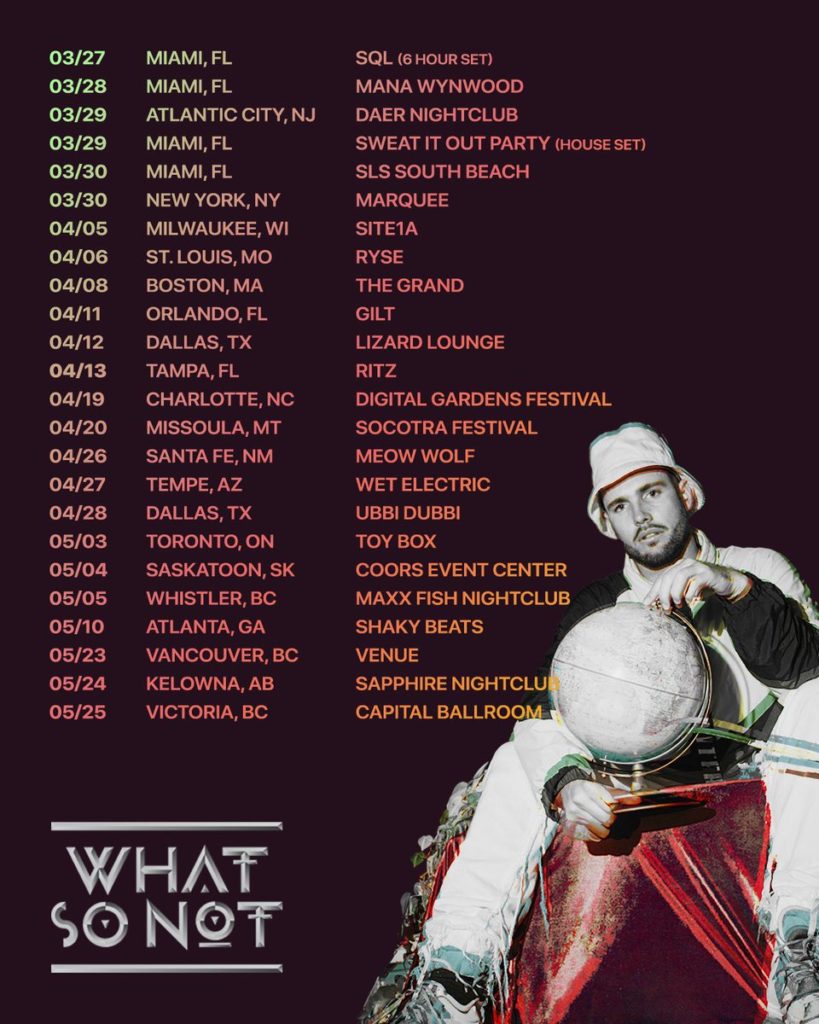 What So Not is returning to North America this spring for a unique club tour. Set for April and May, What So Not will hit a spread of cities across the U.S. and Canada, including New York City, Miami, Dallas, and more. His spring tour will also feature performances at Winter Music Conference, EDC Las Vegas, Ubbi Dubbi, and Shaky Beats. 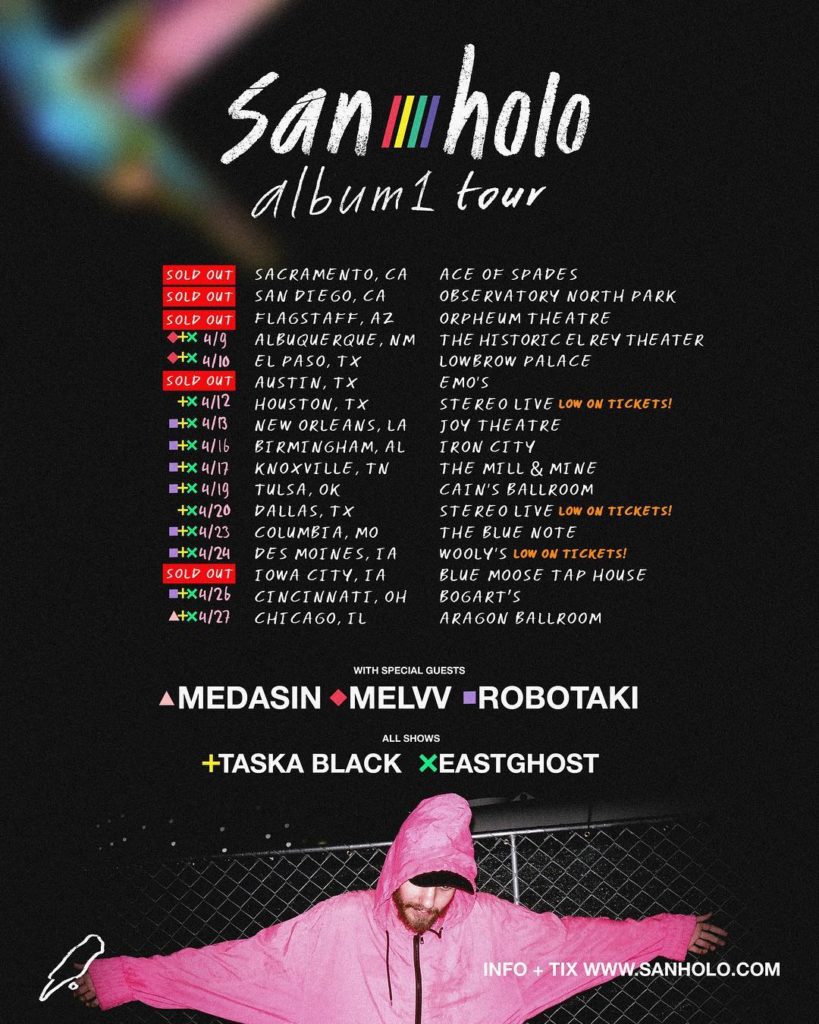 San Holo is preparing for yet another U.S. round of his album1 tour. Joined by fellow bitbird producers Taska Black and Eastghost and special guests Medasin, Melvv and Robotaki, San Holo will hit over a dozen cities this April. The tour will also kick off just following the release of bitbird’s third Gouldian Finch compilation, due out this Friday, April 5th. The album1 tour also precedes San Holo’s epic Red Rocks takeover slated for June 13th. He’s already sold Sacramento, San Diego, Austin, and more so grab tickets while you can. You definitely won’t want to miss San Holo live this spring. 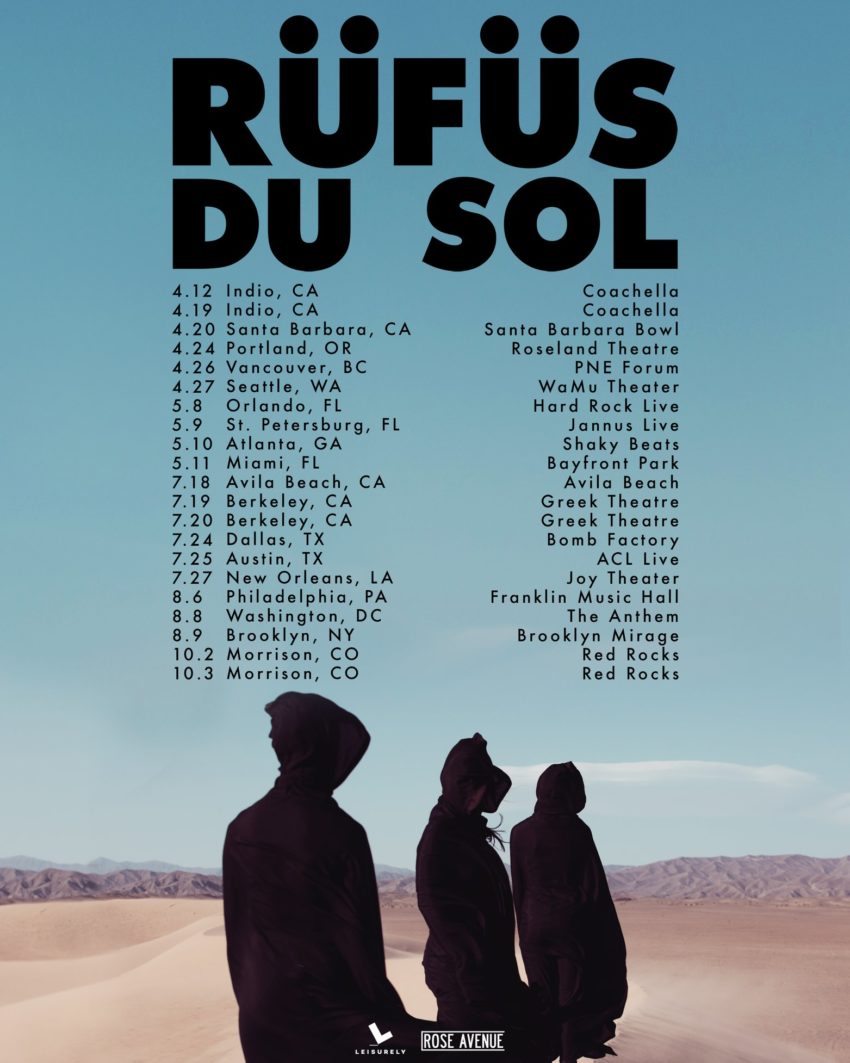 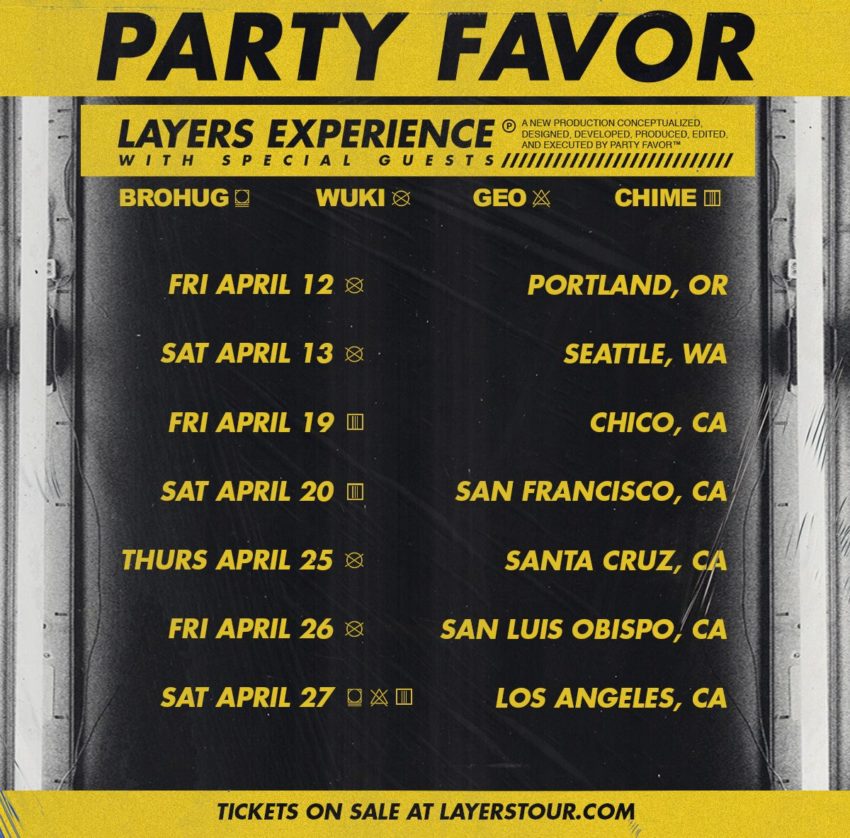 Party Favor has been delivering knockout collaborations and anthemic originals in preparation for his upcoming Layers EP. With the project, he’ll be bringing a new conceptualized design to his live shows. Titling his tour the Layers Experience, Party Favor has invited BROHUG, Wuki, GEO, and Chime to help him throw down. This is sure to be one Party Favor’s craziest tours yet. 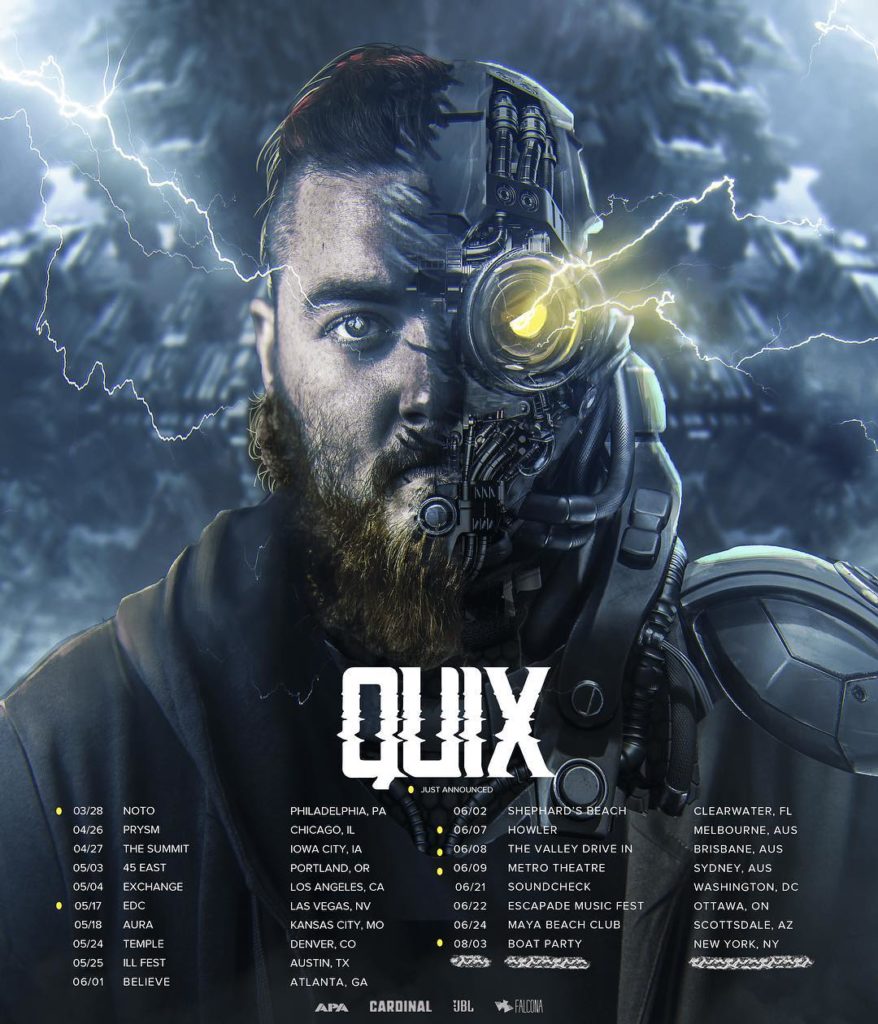 QUIX has dominated the trap world since releasing his phenomenal debut Illusions EP. QUIX is now gearing up for his next North American tour in addition to his upcoming performances at EDC Las Vegas, Ill Fest and Escapade. QUIX will kick off his tour in Chicago this April followed by shows in Los Angeles, New York, Denver, Atlanta, Washington D.C., and more. If one thing’s for sure, QUIX’s live set certainly packs a punch and you won’t want to miss out. 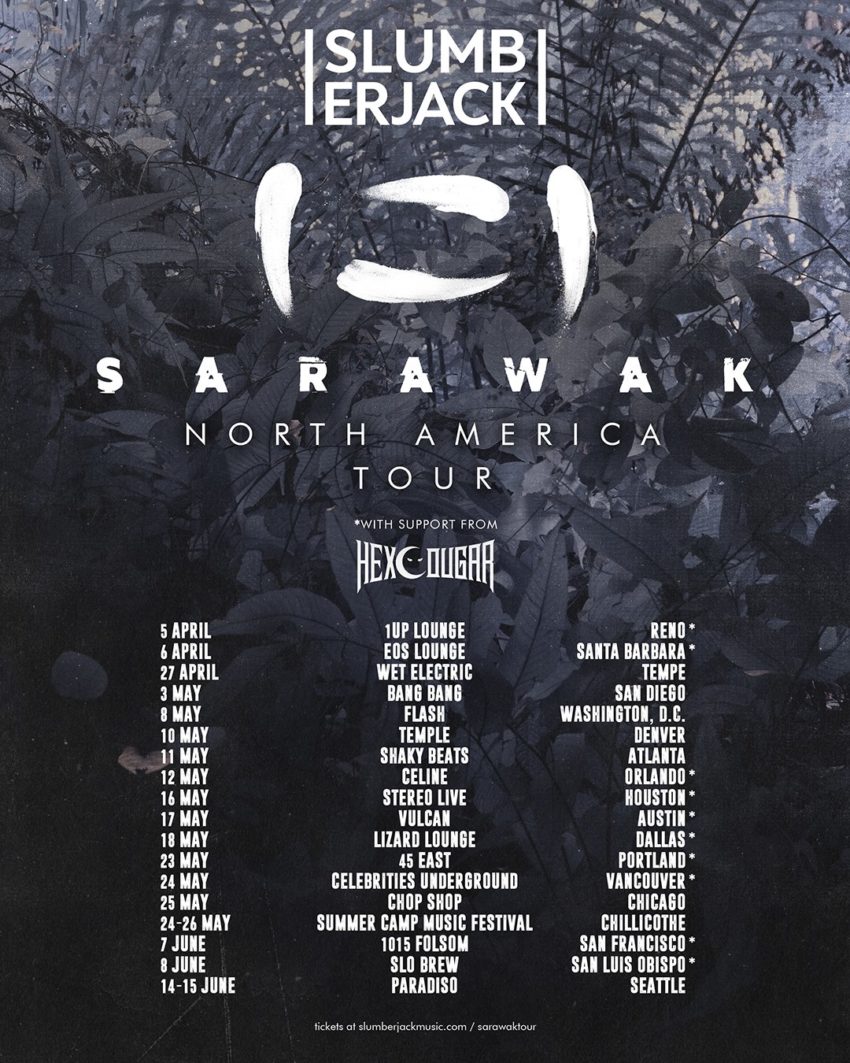 Starting this April, SLUMBERJACK will make their great return to North America for their SARAWAK tour to coincide with the release of their SARAWAK EP. Supported by Hex Cougar, SLUMBERJACK’s upcoming tour is set to hit fifteen cities including Chicago, San Francisco, Denver, Austin, and Washington D.C. SLUMBERJACK will also be hitting Shaky Beats, Summer Camp, and Paradiso festivals this spring. 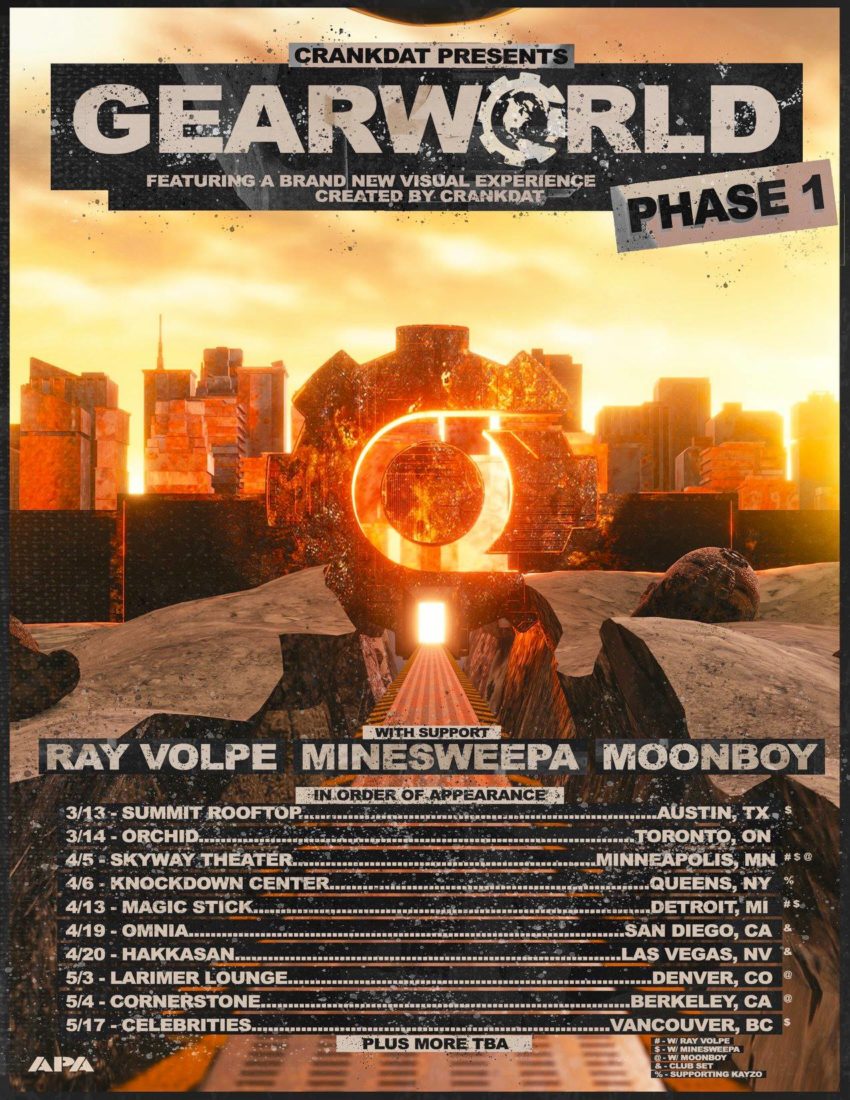 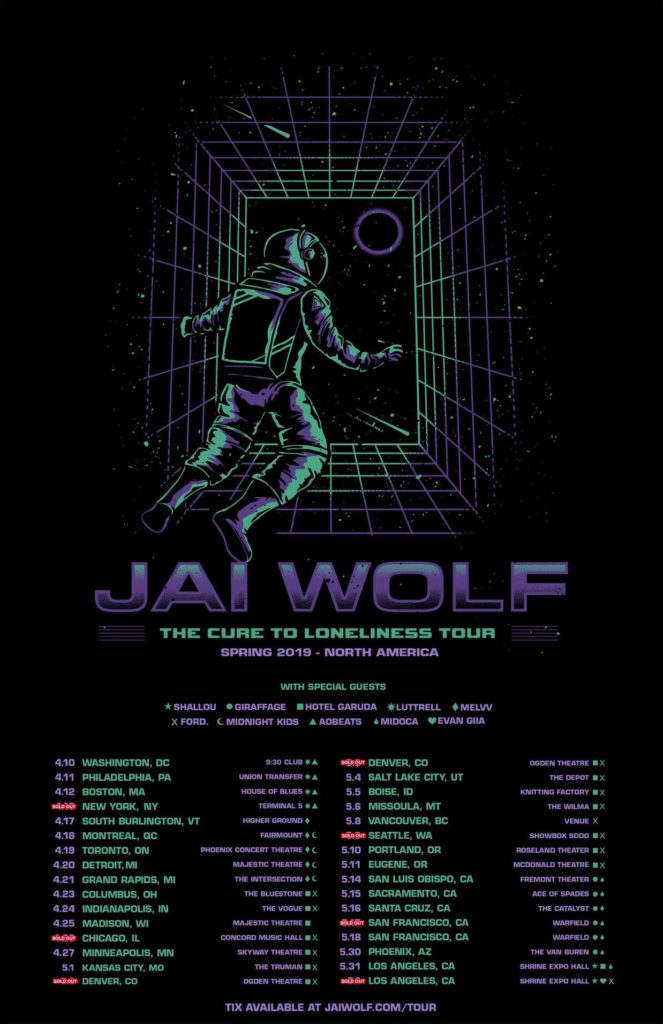 Since announcing his upcoming debut album, Jai Wolf has been on top of the world. With The Cure To Loneliness dropping April 5th, Jai Wolf is preparing for his biggest headline tour yet. The future bass producer has stacked his spring tour lineup with tons of special guests like Giraffage, Hotel Garuda, AObeats, Shallou, Melvv, ford., Midnight Kids, Midoca, EVAN GIIA, and Luttrell. He’s already sold out New York, Chicago, Los Angeles, San Francisco, Seattle, and Denver and even added second dates in several cities. Tickets are definitely going to fly even faster once his album drops so hop on them now before the rest of his tour sells out. 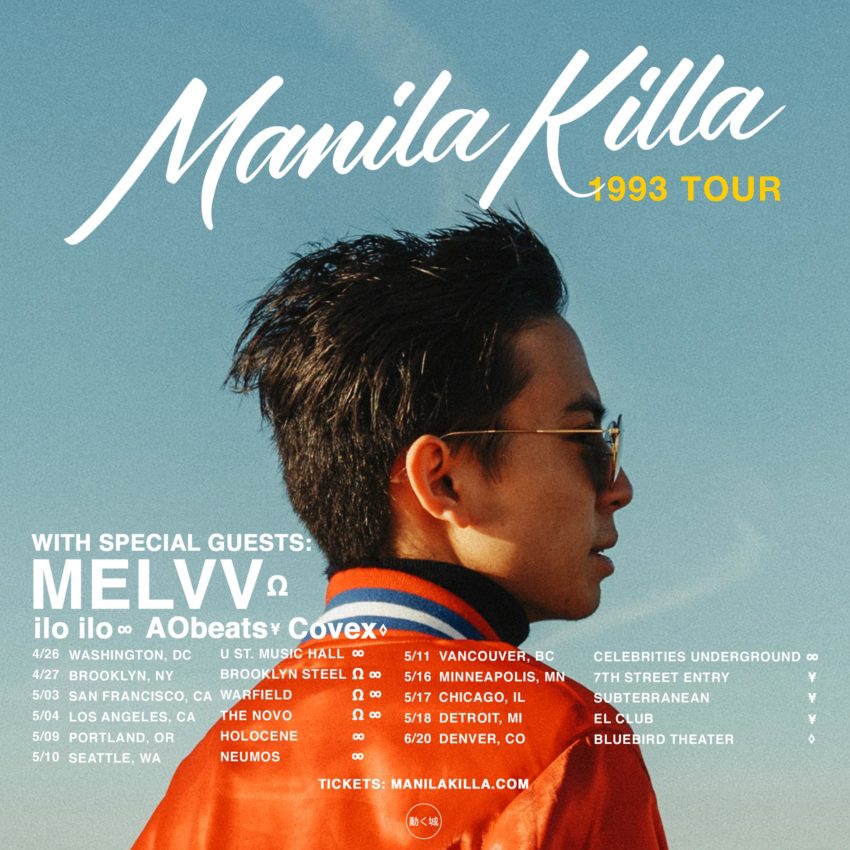 Manila Killa has been making major moves since departing from his Hotel Garuda side project. Following the release of his debut 1993 EP, Manila Killa has announced a shiny new headline tour. Bringing along special guests Melvv, ilo ilo, AObeats, and Covex, Manila Killa’s 1993 tour is set to be his biggest tour to date. 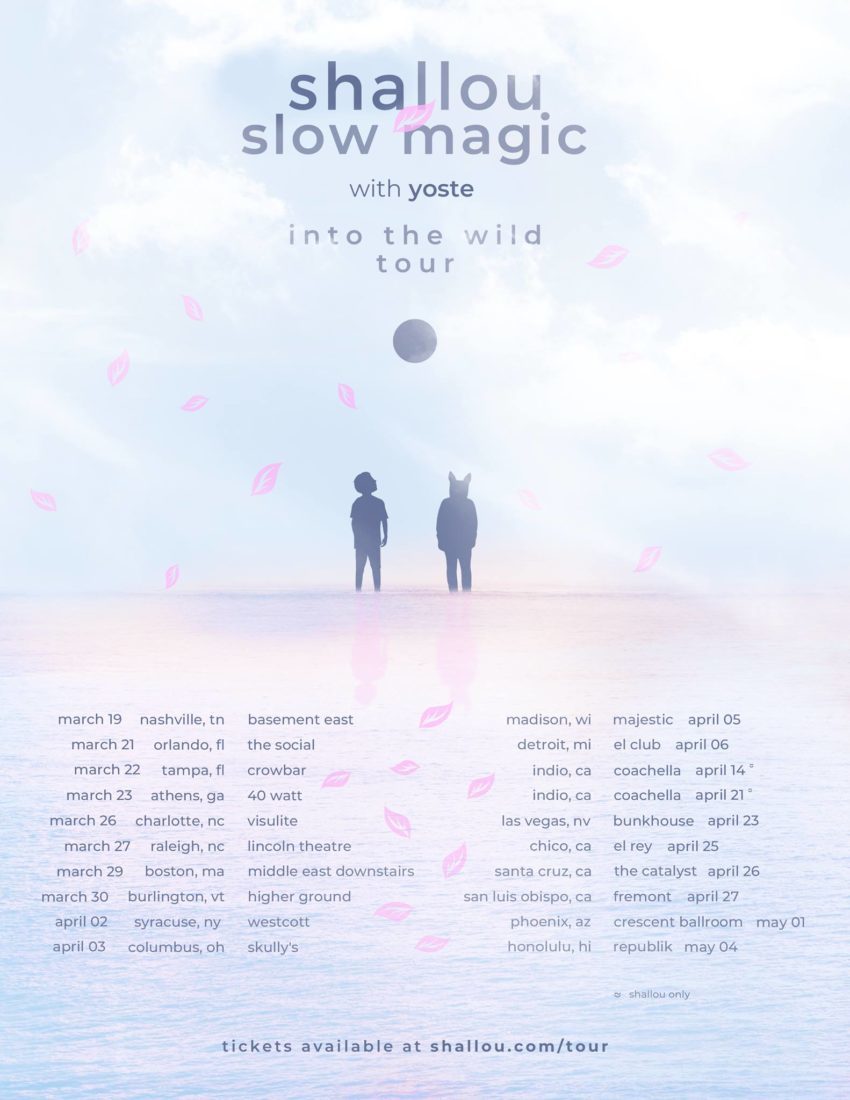 Shallou and Slow Magic are joining forces to bring forth one of the most interesting co-headlining tours of the season. The pair of indie-electronic producers will be sharing the stage in eighteen clubs across the country this spring. Shallou will also be hitting both weekends at this year’s Coachella. If shimmering, glittery indie vibes are you’re thing, then this is the tour for you. 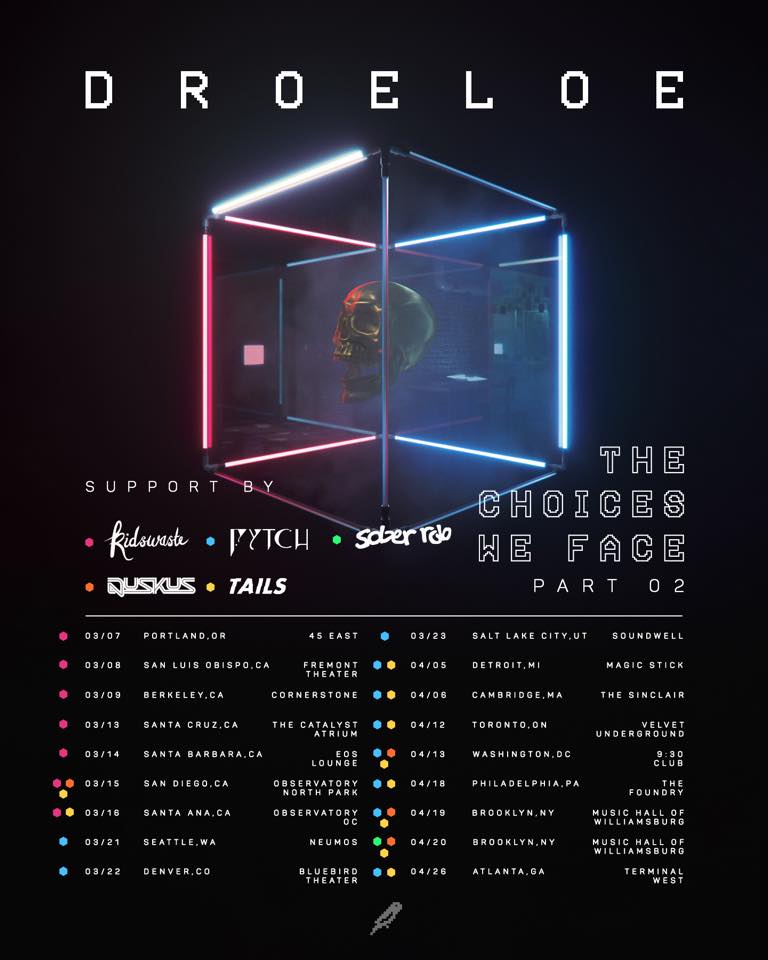 DROELOE captured our hearts with their stunning The Choices We Face EP and spent much of 2018 on their first US headline tour and hitting festivals like Bonnaroo, Lollapalooza, and Electric Forest. The second iteration of their The Choices We Face tour is set to feature supporting sets by Kidswaste, Duskus, Fytch, Sober Rob, and Tails. They’ve got a ton of new music in store for their next tour, so it’s definitely one you won’t want to miss. 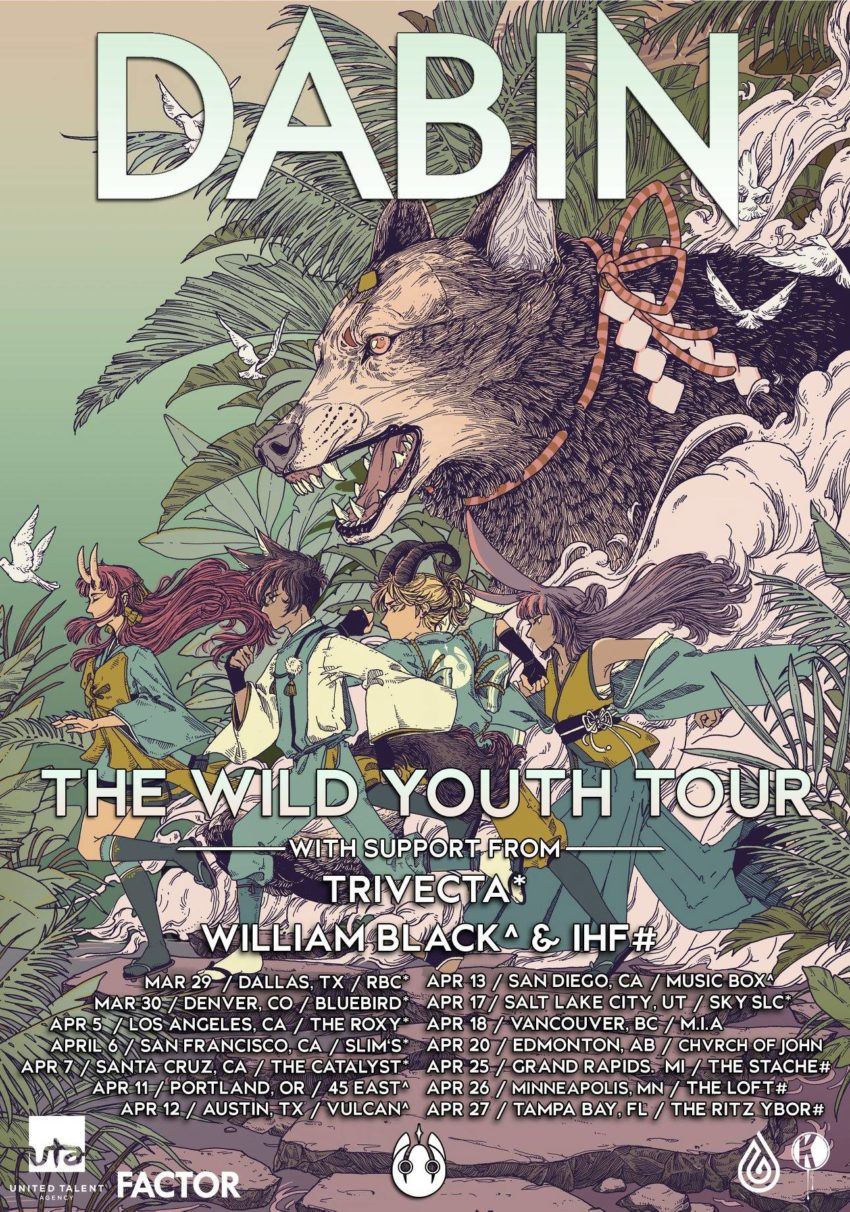 Dabin‘s highly-anticipated sophomore Wild Youth album arrived last week and with it comes the promise of a headline tour. Supported by Trivecta, William Black, and IHF, Dabin will be hitting fourteen cities over the next month. With his album already in the running for best electronic album of the year, we cannot wait to see what his live set entails. 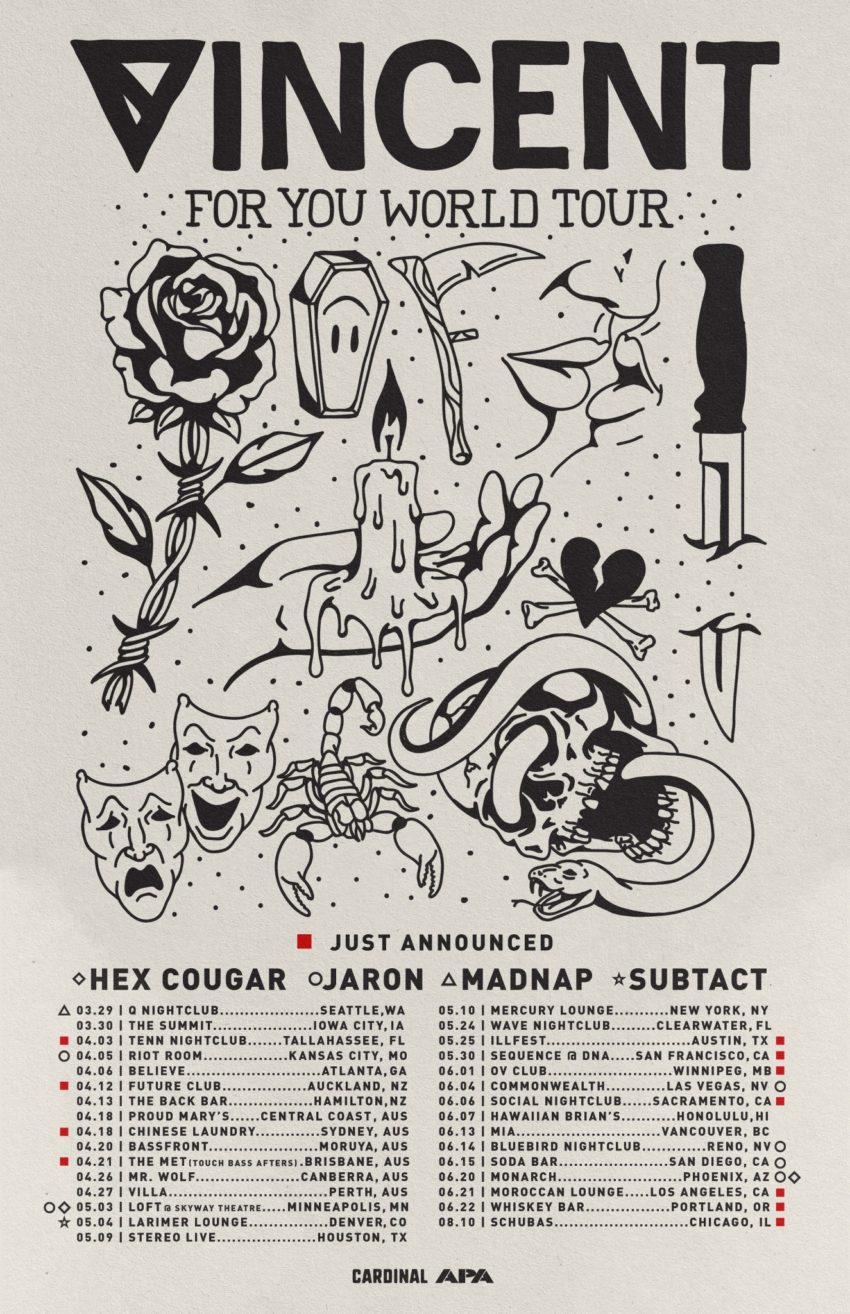 Following his debut For You EP, Vincent is headed out on his first headline tour. With dates ranging through North America and Australia, Vincent’s For You tour will be supported by the likes of Hex Cougar, Subtact, Jaron, and Madnap. Hitting more than twenty U.S. cities, For You marks Vincent’s largest tour to date and judging by the promo video, you certainly won’t want to miss out. 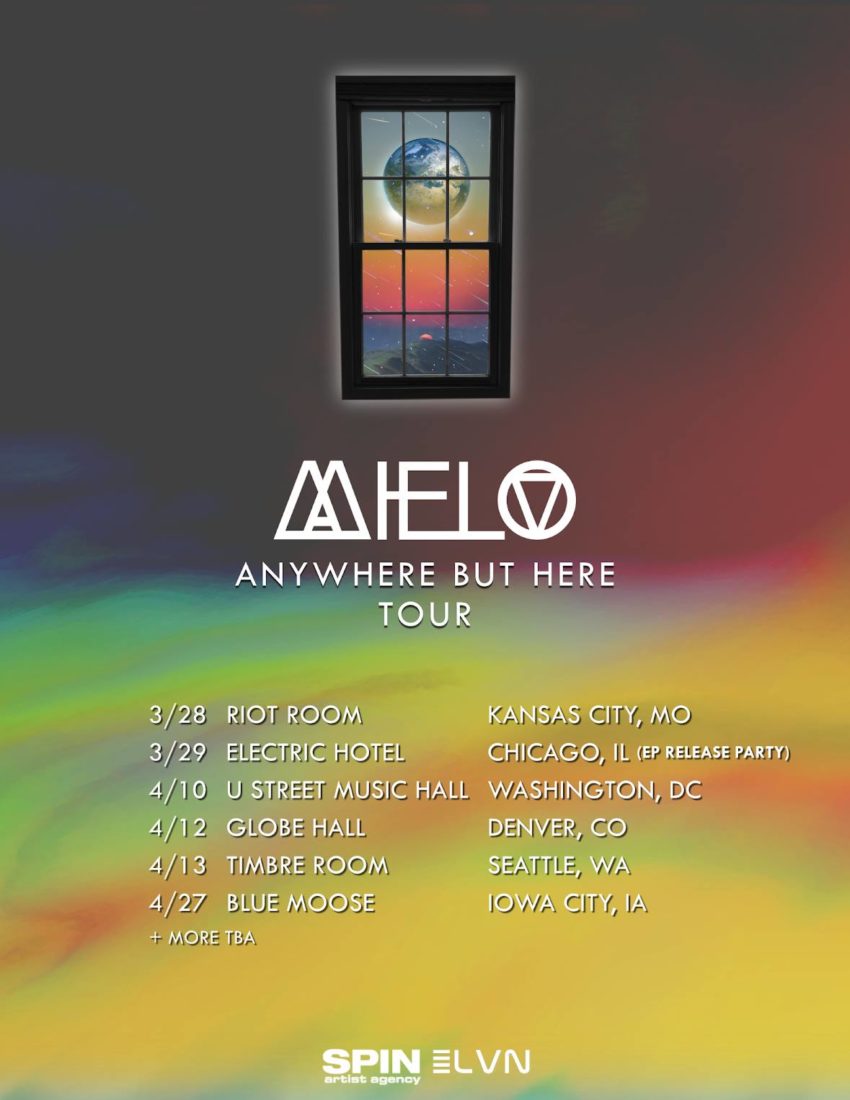 Mielo has been making major moves this year. Following the release of his debut Anywhere But Here EP, the Chicago-bred producer has announced that he’ll be hitting the road this spring. Set over the course of six dates with more to be announced, Mielo will perform a special EP release party in his Chicago hometown.