While no one wants to be accused of copying directly from pop culture, you’d be mad – and a tinge dishonest – if you didn’t admit certain films don’t influence your style. Occasionally, it might be a direct response; in others, it’s more of a trickle-down effect from the movies to the runways to eventually the High Street. Yet, amongst the vast range of menswear-influencing films, some strictly have a temporary effect: Think The Matrix on late ‘90s/early-‘00s Goth and club kid fashion. Some are simply flash without lots of substance – the Kingsman movies, for instance, are set below a Savile Row tailoring shop, while American Psycho interplays an obsession with high-end ‘80s brands with grotesque, butcher-like killings. A few make period dressing look better in hindsight – like French film La Heine – and a few more – like the Tom Ford-directed A Single Man – are bound to be more influential because of a fashion designer’s input. Examining all of this, we’ve narrowed down the expansive cannon to 11 films that continue to influence how we dress and approach clothing:

Similar guides break these out into two separate entries. Here, we’re keeping them as one. For starters, both use the same source material and setting. Secondly, both flicks have impacted how we view what’s considered “Mediterranean” style. The 1960s film starring Alain Delon in the Tom Ripley role embodies quintessentially coastal city dress-leisure, where lightweight button-fronts in linen and batik prints are de rigueur for handling the heat as you amble through the cityscape of centuries’ old buildings and cobblestone streets. For a good deal of the time Delon’s on screen, his shirt’s buttoned just barely above his waist, and while, these days, this motion falls under a fashion-don’t, it adds to his character’s snaky-yet-dapper rakishness. Just like the setting itself, his wardrobe’s held up to the test of time; these days, you could don similar pieces on the French Riviera or Mykonos, and no one would blink an eye.

The late-‘90s version shifts the sartorial focus over to Dickie Greenleaf for the first half of the film. After all, the unassuming, if not slightly nebbish Ripley, played here by Matt Damon, lusts after Greenleaf’s lavish and funded lifestyle – as well as the man himself – that’s always slightly out of reach. With a dress code filtered through a 1950s’ Americana lens, Jude Law, playing Greenleaf, is decked out in casually relaxed camp shirts and polos, rolled lightweight pants in dusty-to-pastel hues, and shorter-length shorts that could easily double as swim trunks. It’s a period embodiment of endless leisure time where a suit is only needed when you’re headed out to the jazz club. 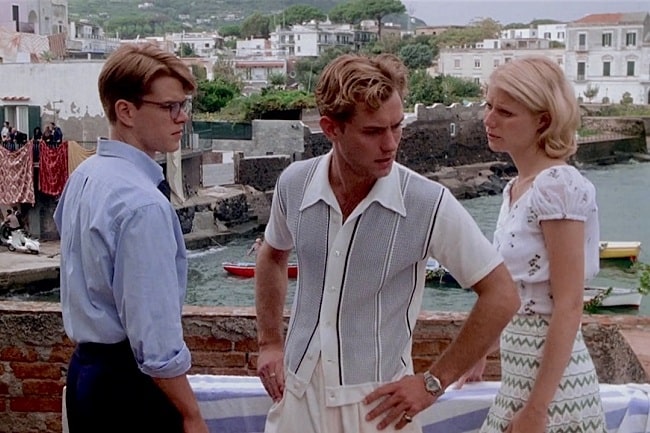 A murder plot is somewhere in this film, but who cares? The style – and secondarily, the music from Giorgio Moroder – is its lasting mark on pop culture. Firstly, its wardrobe transformed ‘80s suiting, introducing a casual-leaning, more spacious fit complete with padded shoulders, lower-positioned lapels, and, yes, pleats. Considering the arc men’s suiting made over the decade, it’s as far away from Wall Street smarm as you could get, yet its fit – and slight devil-may-care charm – is clearly an influence that, over the past year, wormed its way back into men’s wardrobes. Beyond just the era’s one-percent, the film reworked the casual suit from its polyester-based leisure days of the ‘70s into a lighter-weight, occasionally linen-based ensemble that hangs a bit yet is fitted in all the right places. To put it simply, American Gigolo defined both going-out and office wear for the next 10 years, and elevated Armani to a global level. 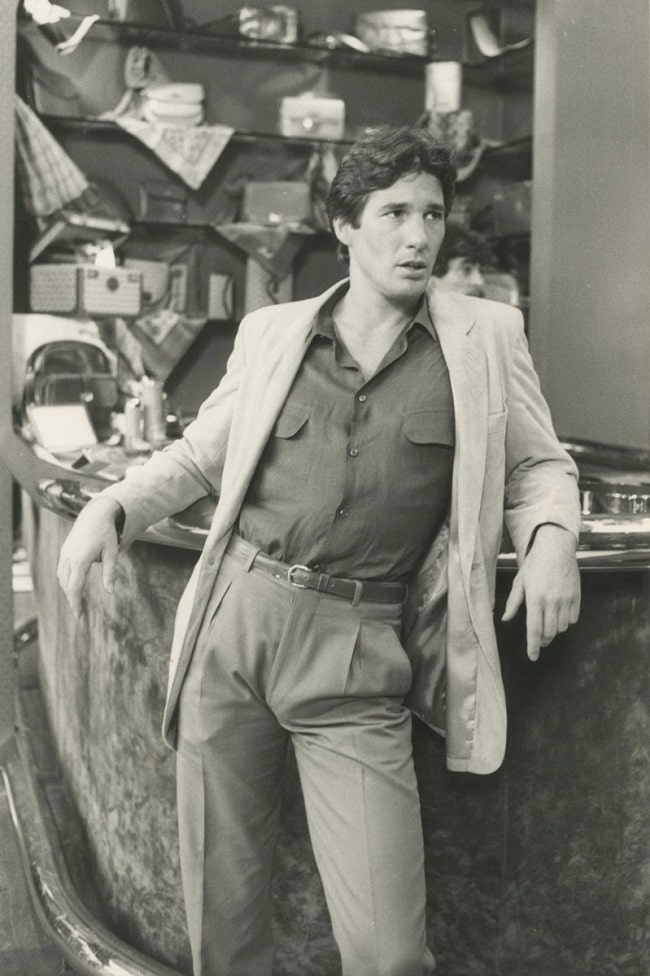 You can’t pick just one. Much like the plots, attitudes toward women, and special effects, the style of each James Bond flick is a product of its time – both reflective of trends but with a modest hands-off attitude. Bond – whether played by Sean Connery, Roger Moore, Pierce Brosnan, or Daniel Craig – doesn’t seem like the man to grab a trend and run with it. Rather, suiting – and its emphasis on classic tailoring – elevates that “How well do I know this guy?” aura. It’s part classic, part of-another-era, and part too-good-for-this-place. You sense it in the shawl tuxedo Connery sports early on in Dr. No, and you sense it through the crisp, linear-fitting, and tonally matched Tom Ford-designed ensembles of the Craig era. In between, In between, Brosnan’s solid black tux, with a contrasting and lightly pintucked white shirt, is the very definition of ‘90s playboy, while Moore – clad in double-breasted jackets, plaid, and flared trousers – symbolizes ‘70s excess that returned to menswear a couple of years ago. 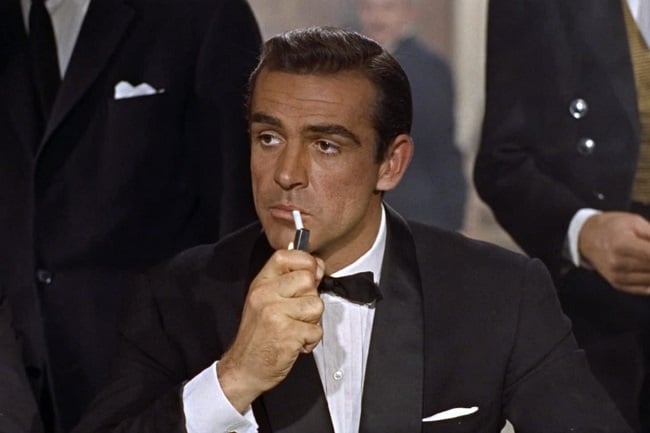 Amongst ‘90s films now serving as streetwear-inspiration fodder, Larry Clark’s Kids comes out on top for its window into period skate culture and pre-gentrification New York City. John Singleton’s Boyz N The Hood falls to second or third place, but in relation to style, we’d have to argue that it’s a superior film. For starters, Kids is fully a product of its time – from the AIDS-themed plotline that veers very close into kiddie-porn territory to the dress-like oversized T-shirts to the trousers so wide you can (literally) fit a liquor bottle underneath. It’s all meant to be shocking, but through a 2019 perspective, it feels very after school special-y and unintentionally strips the shine off ‘90s nostalgia. Boyz N The Hood – from the aesthetic to the setting – isn’t a snapshot of a bygone era. For starters, South Central LA hasn’t gone through the drastic changes Manhattan has. Secondly – and more for our purposes – the styles have held up relatively, and are still keystones of many casual menswear and streetwear wardrobes: color-blocked, looser-fitting button-ups, chambray shirts, athletic sweatshirts, and higher-waisted chinos and jeans. You could easily browse through ASOS or BoohooMan now and pick up a similar assortment of styles. 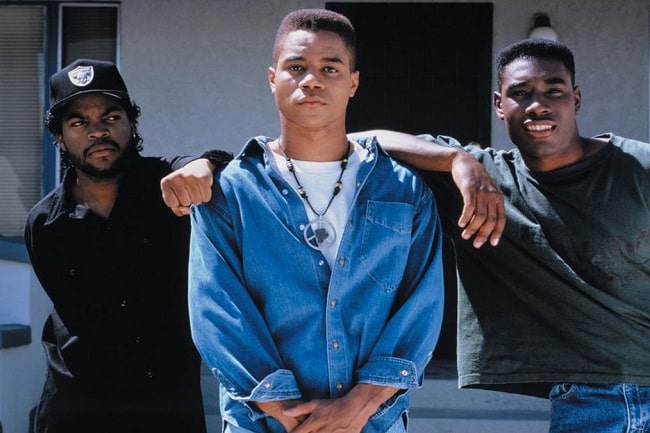 Rebel Without a Cause

Strictly in terms of casual menswear, Rebel Without a Cause is one of the 20th century’s most definitive films. Firstly, not long before its release, T-shirts were strictly worn as undergarments. In a crisp-yet-lightly-worn white number, slim but not fitted, and jeans rolled at the cuffs, James Dean’s Jim Stark presented an antithesis to the stiff Eisenhower era’s grey suit-upheld, burgeoning suburban lifestyle while also viewing masculinity through a more casual, although not truly softer, lens that still pined for Natalie Woods’ Judy but didn’t rebuff the yearning glances of Sal Mineo’s Plato, either. Secondly, in more of a modern sense, the red windbreaker – equally iconic as Drive’s silver souvenir jacket (more on that below) in the pantheon of menswear – proved that not every badass has to wear leather. 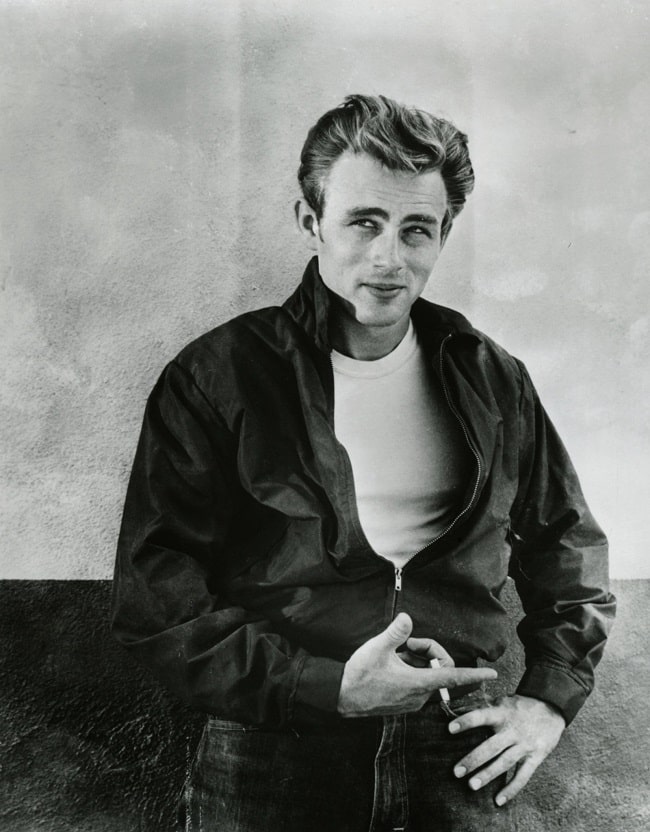 On the subject of badasses, Dirty Harry reinvented this trope in the ‘70s: He was the “good guy” with a gun, the maverick cop on a search for justice, and did it in suits, knits, and polos without nary a leather jacket in sight. The flick proved prep style isn’t strictly pansy-wear for cloistered Ivy League types, and introduced a more casual – and accessible – approach to the James Bond way of doing suiting. Proving Dirty Harry’s aesthetic wasn’t isolated, Get Carter, starring Michael Caine, echoed it in a more strictly British setting. 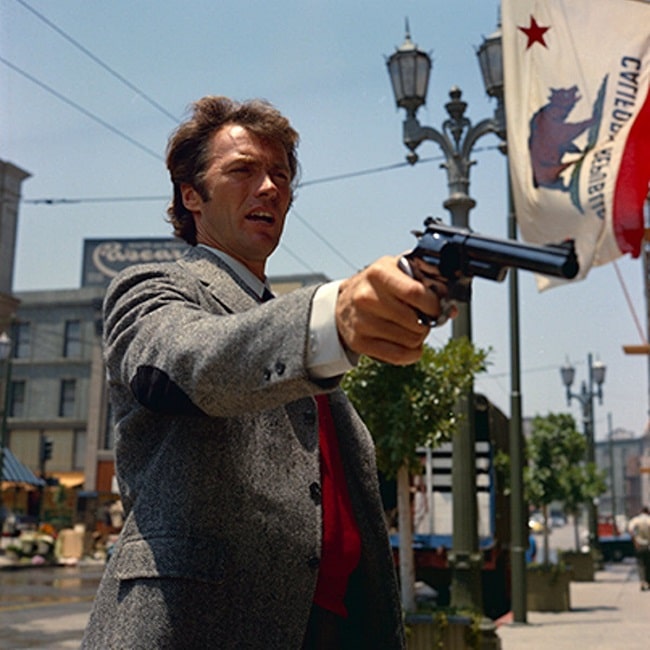 If James Dean’s red windbreaker established the bomber as a classic jacket, Ryan Gosling in Drive revived it for the modern man. Not solid colored or staid, its white-silver satin construction has a beacon-like quality to it, albeit in more of a menacing manner, that stood out with an embroidered gold scorpion, high neck, and quilting. Yes, it alluded to the ‘50s and was infused with ‘80s influences, but solely as a product of the past decade and a marker of current menswear, it sharply veered – yes, the pun is intentional – away from classic style, even reworking the souvenir framework on which it was based. It looked soft yet flashy, embodied everything “statement,” and lasted through just about every blood-splattering fight and kill without losing its cool.

If Boys N The Hood and Kids represented ‘90s streetwear from an American perspective, Trainspotting did it from a more Scottish angle, focusing on a group of heroin users dressed like Edinburgh neds in thrift store-esque threads that seemed to simultaneously fit poorly yet perfectly. A shirt’s too tight or cropped, a jacket too wide in the body, and the trousers have a little too much length and width below the hips, but it all comes together in an “I just threw this on” way of a guy who doesn’t care too much about fashion – he’s got better things to do – but still looks good, albeit in a slightly scuzzy way. 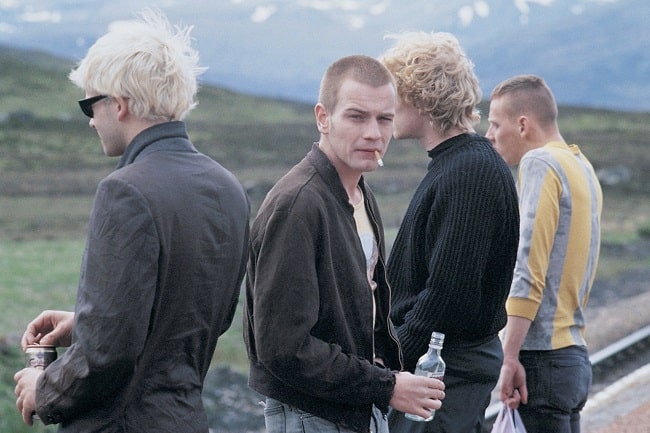 It’s a Baz Luhrmann movie, so expect lots of lavish sets and splashy colors. While the script stayed true to the Shakespearean word, the setting shifted from Verona, Italy to Verona Beach, California, and the definitively late-‘90s wardrobe plays plenty of patterned, Versace-style Hawaiian shirts off Tom Ford-at-Gucci sharp, ‘70s-alluding suits that feel effortless yet still have a louche edge about them. Not surprisingly, Hawaiian shirts – especially worn unbuttoned with an undershirt below – flew off the shelves in the years following its mid-‘90s release, and the flick itself still pleads a strong case for its off-cruise character.

For the young’uns out there wondering why Steve McQueen continues to end up in classic menswear inspiration articles, look toward this movie. Prior to its release, McQueen spent many of his on-screen roles as the leather-jacketed, frequently rugged tough guy. While The Thomas Crown Affair placed him in a similar role – rich guy with criminal tendencies – it changed up his wardrobe – and subsequently his image – with a perfectly pressed, lightly textured three-piece suit that, looking back in 2019, makes you want to start wearing a waistcoat again. 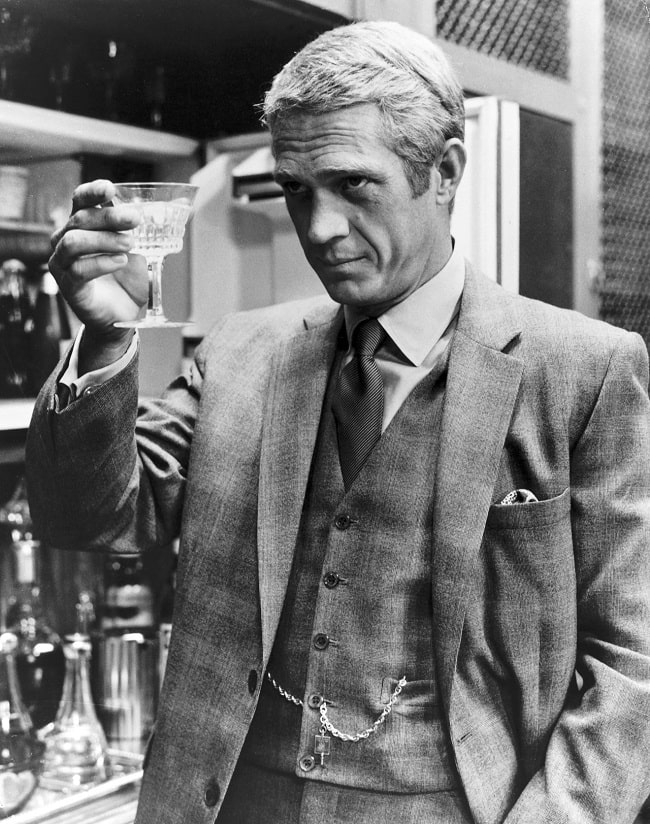 If you’re going to make a life of crime, you better look good doing it. Over the past couple of decades, such reasoning turned the 1983 version of Scarface into a much-watch gangster flick, and gave us Miami style without all the kitsch of Miami Vice. There’s nothing from its wardrobe that in 2019, you wouldn’t want to cop: Brightly patterned silk Hawaiian shirts, unbuttoned perfectly for the South Florida humidity, crisp double-breasted suits in white and pinstriped varieties, and spread-collar shirts accented with multiple gold chains beneath. 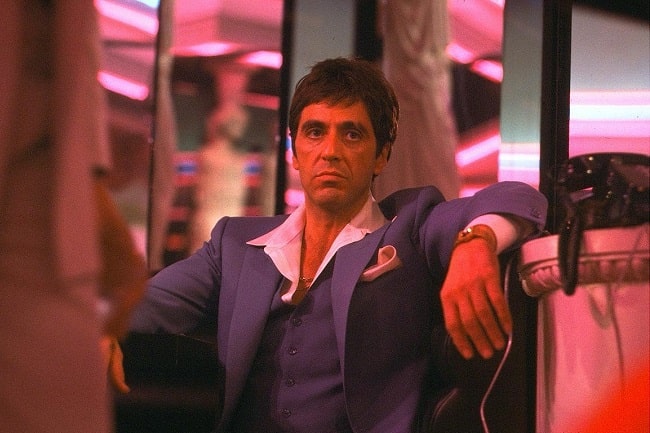